While academics typically recognize the publication of research as the most permanent form our work can take, the work we do in the classroom can feel by turns endless and ephemeral. This ephemerality has real benefits, teachers and students know, be it in the restart button we can press at the beginning of each class or in the knowledge that every term, no matter how grueling, will come to an end in a matter of weeks. Yet this always-passing time of teaching can make it easy to forget classroom moments worth remembering. Such a moment — a powerful, semester-long moment, but a moment nonetheless, in a special topics course entitled “Mediating Ferguson, USA: 1915-2015,” on “race, justice, and popular U.S. film and media in the 20th and 21st centuries” — inspired me to mark it with the permanence of publication. For in this class, at a predominantly white institution where students are often hesitant to talk about race, an unusually diverse group of undergraduates came together, day in and day out, for exceptionally open, incisive, and productive discussions about race and its intersection with a host of social dynamics, on screen and off. With these columns I hope, at least, to honor this remarkable community of students, who made our sixteen weeks together among the most meaningful in my nearly two decades of (rewarding) teaching at the University of South Carolina. I also write fueled by a sense that some fundamental questions about teaching race and media studies — questions about how we do it, why we do it, what tends to work and not work, and for whom, where, and when — are being profoundly reshaped by histories still very much unfolding.

In my first column, I sketched the historical moment, locally as well as nationally, of the months and weeks leading up to the course, because that backstory so shaped it, and in ways that far exceeded any frameworks my syllabus or pedagogical habits might have provided. As one friend’s visiting relative put it of Columbia while visiting here in the summer of 2015, it felt then like we were at the “epicenter” of a convulsing national crisis around race and violence. The community this class became was forged in the urgency of that moment. And our awareness of how unusually and acutely our work within the classroom was being shaped by histories unfolding beyond it had little chance of diminishing over the course of a semester punctuated by more viral videos of police brutality and a rise of student activism, here as around the country. One such video, from Columbia’s own Spring Valley High School, made the “school to prison pipeline” shockingly vivid, and once again brought painfully home our own undeniable place in what we might describe as the newly vivid, albeit unofficial, network of institutional forms of racial injustice being mapped on our screens through such videos from points throughout the country. And when students, including some from our class, organized a walkout and marched to the President’s office to deliver a list of demands for improving inclusivity on our campus, the class understood this, too, in the context of both particular local histories (the list began with the “demand that our university acknowledge that this institution was built on the backs of enslaved Africans”) and a larger national surge of student activism that fall. In the midst of all this, it thus became routine — and often felt necessary—to begin class by checking in on the latest relevant developments, which students readily connected to our assigned materials, even when the syllabus could not have. 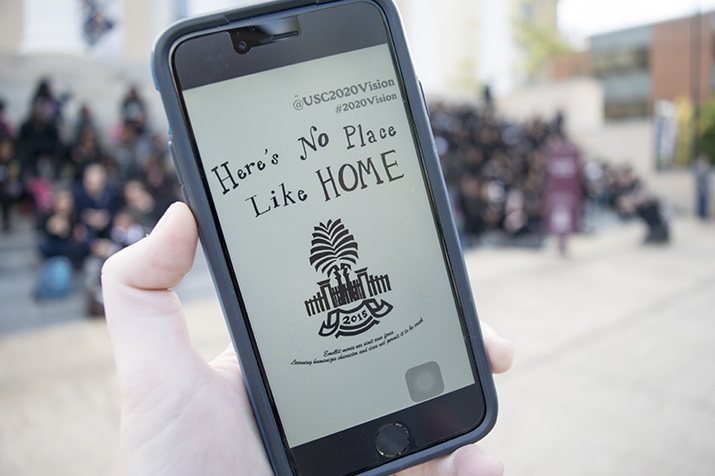 Students Demand Greater Inclusivity, On Screen and Off

In part because of so many structuring contingencies beyond my pedagogical control, it seems worth reflecting on some deliberate strategies that also played a part, regarding the course’s title, syllabus, and some assignments.

What I initially recognized to be a certain risk in the course title, “Mediating Ferguson” — that it would appeal to a self-selected group and might turn off “students who most need” a course like this (as we educators sometimes and perhaps too condescendingly put it) — I came to understand only later as also having had tremendous benefits. For the title’s self-selectivity brought together a group of students at once eager to engage and unusually diverse. Whereas media studies classes here are usually, like our institution more generally, predominantly white, nearly a third of the students in this class were African American. Students also routinely spoke, and thought, from positions marked by genuinely diverse socioeconomic, sexual, and geographic experiences. In short, not only were we not slowed down, or derailed, by stubborn resistance or routine reluctance to engage, but the students who were so eager to engage had both a safe space and an excellent group of peers with which to do so. The class discussions that resulted (I almost never lectured) were thus routinely probing and robust, and we all had daily opportunities to seriously listen and respond to others with sometimes profoundly different experiences and insights from our own.

While so much of this, to be sure, had everything to do with the particular students in the room, one syllabus experiment seemed to help. While I routinely begin media history classes with contemporary material — to draw students in and to prime them to look back at media from the past with eyes and ears open for reverberations with the present — in the Ferguson class I expanded the scale and goals of the opening contemporary unit. We began with three weeks of immersion in contemporary material, with several aims: (1) to give the class a shared set of materials with which to join the current “national conversation” about race (including viral videos, some excellent journalism, and Lawrence Bobo’s, “Somewhere between Jim Crow and Post-Racialism: Reflections on the Racial Divide in America Today”); (2) to equip students (who came to this class from several different majors) with key concepts in media studies for thinking about cultural formations of whiteness and blackness (including work by Richard Dyer and Herman Gray); (3) to invite them to begin to consider distinct ways of thinking and feeling about race afforded and/or discouraged by distinct media forms and practices (in addition to the materials already mentioned, we watched Fruitvale Station [2013], a superb group of young black poets on campus performed a reading of their work in our class, and each student had to “curate” a digital media post to the class’ Facebook Group—finding something online they thought would add to our conversations and pithily explaining why); and (4) to cultivate habits for generating productive questions for further inquiry and research. This last goal involved two kinds of tasks, the second of which expanded (and enhanced) the work of reading responses. First, in a series of daily assignments, they were asked to pinpoint key arguments and insights from the readings and generate specific critical/conceptual questions of their own in response. Then, having done this for several weeks, they had to submit a revised, edited list of questions (refining, expanding, etc. those previously drafted) that seemed important to continue thinking about in the course and/or (potential) future research.

These four aims fed each other, and encouraged students from the start to articulate, sharpen, and develop the questions they found most urgent and productive. And by the end of this first unit, they each had not only an arsenal of potential research questions, but also a method for how to develop these. I also invited them relatively early in the semester to think about what kind of research and/or creative work they might want to do to pursue their questions. Or, as I put it to them more than once: “How do you want to mediate Ferguson, etc.? What kinds of things do you most want to say and/or to show? And to whom? And which media forms and practices might best help you reach your audience(s)?”

Also vital to the success of this first unit, and the rest of the course, was one of our earliest discussions — grounded by the Bobo reading with all the specific examples, and data, he provides — in which I asked them to specify what we are talking about, exactly, when we talk about “institutional,” “structural,” or “systemic” racism. Once we had established a concrete understanding of the kinds of historical and contemporary social practices these terms refer to (we covered the board with them one day), I could then ask them to think in specific ways about the work of distinct media forms and practices in relation to such systemic inequities. Right away, they recognized how the viral videos coming across their screens from seemingly everywhere made visible the institutional, systemic nature of police brutality. These early conversations also set us up to then look back at a diverse set of media histories with eyes and ears more attuned to discern their specific, varied, and shifting forms of mediating race.

1. Author’s Screenshot of Group Facebook page, with cover photo of protesters with JR’s image of Eric Garner’s eyes, from JR on Twitter.
2. Photo from The Daily Gamecock of phone with image from an online petition of the student activist group, USC 2020 Vision, taken at the start of a student walkout at the University of South Carolina on November 16, 2015.