Author’s note: In the summer of 2016 I agreed to write a series of guest columns on teaching race and media studies today. I drafted most of this first one in early fall, before having to shelve it for a while to complete a book—entitled, coincidentally by now, Split Screen Nation. By the time I could return to this piece, it was only a week after the results of the presidential election had stunned and horrified millions of Americans. In that context, the challenges animating the piece remained deeply familiar, yet also felt—like most every challenge we collectively face—profoundly more daunting. In a world in which Donald Trump is the U.S. President-elect and Steve Bannon has ascended from the alt-right (white) media “fringe” to the center of world power, few things seem clearer than the limits of confining academic work for social justice within academic institutions. [1 ] The column below nonetheless remains much as I first drafted it, in part due to time constraints. In addition, when I returned to it I found the recent (pre-election) histories it attempts to describe to resonate with still more recent events in ways I could never have imagined, even weeks ago. 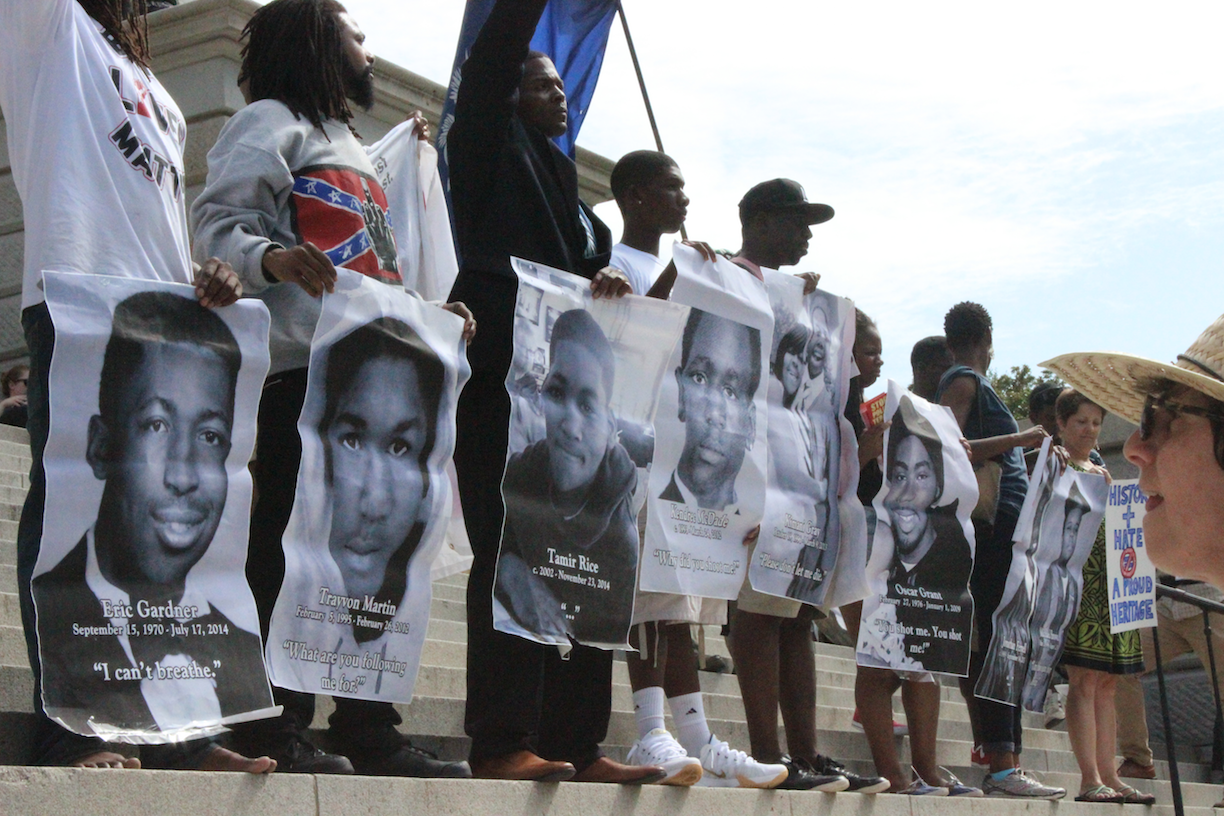 Protesters at South Carolina State House, July 3, 2015
“What is true in the South is true for America.”
-President Obama, Eulogy for Clementa Pinckney,
(Live Streamed from) Charleston, South Carolina, June 26, 2015. [2 ]

Having taught race and media studies at a public university in the South for nearly two decades, for the first time I find myself with the urge to write about doing so. Two things initially inspired this: intensified national discussions about race in the United States sparked by the seemingly unending emergence and circulation of videos documenting lethal encounters by African Americans and Latinos with the police, and an undergraduate class I taught in response to these phenomena in the fall of 2015, “Mediating Ferguson, USA: 1915-2015.”

Simply put, “Mediating Ferguson” was an experiment on several levels, and more successful than I ever imagined it might be. The students in it were exceptionally engaged and invested, and rigorous thinking and honest discussion—across differences of race, class, gender, and sexuality—became the daily stuff of class, and brought a routine sense of relevance, at times even of necessity, to our work on media both old and new. Indeed, from our first day to our last, we were all well aware that the class was profoundly shaped by our historical moment. So much so, that while I will discuss in a subsequent column some of what occurred within it, and pedagogical strategies (regarding syllabus design, assignments, and so on) that played a part, it seems essential first to sketch how the class emerged, when it did, and where. All of this was, and remains (not least in mid-November, 2016), utterly relevant to the pedagogical challenges and practices at issue.

Although I taught this course in fall 2015, I proposed it in late 2014, prompted by recent events. These included (that summer) the killings by police of Michael Brown in Ferguson and of Eric Garner in Staten Island; the grand jury decisions in both cases (in late November and early December) not to indict the officers responsible; and the waves of protest and an activist movement, Black Lives Matter, sparked by these and related cases. But what moved me to envision the class was my viewing of the video of Eric Garner being choked to death by police as he begged them to let him breathe. I didn’t watch it until just after the grand jury’s decision in this case came down. But when I did, at home alone one morning, I found myself weeping in disbelief. As I eventually tried to recompose myself, wondering what I might be able to do in response to what I had seen, all I could think to do was write a course description (which in any case was due). As I brainstormed, I realized that the year upcoming, and hence the semester in which I would teach the course, would mark the centennial of D.W. Griffith’s The Birth of a Nation (1915)—a film not only infamous for its celebration of white supremacist vigilantism (fueled by racist fantasies of black criminality), but also of local note for its (imagined) locations in South Carolina, including the state house that lies just blocks from my campus. Groaning to myself (“Oh great, it’s Birth’s birthday”), it seemed right to foreground the course’s historical dimension in its full title.

My course description pitched the class as a “history for the present”: we would begin with viral cell phone and dash cam videos and the “current national conversation” with the aim of figuring out what questions we thought we most needed to be asking; but we would then turn to look back at the history of race and justice mediated through U.S. film and television, to consider what this media history “might have to teach us about where we are now, how we got here, and strategies for moving forward.” In the spring of 2015 I put up fliers announcing the course with an AP photo by Bebeto Matthews of an African American protestor with his hands up in the air and his mouth covered by a paper mask with Eric Garner’s final words written on it, “I can’t breathe.” After the fliers were up another video went viral, this one shot closer to home by a bystander in North Charleston, South Carolina, in which Officer Michael Slager fires his gun eight times at Walter Scott as Scott tries to run away, and then, after handcuffing the fallen and immobile victim, appears to tamper with evidence.

If video footage such as this was already becoming disturbingly familiar by the time students began enrolling in the course—with the circulation of videos documenting incidents leading to the deaths of Tamir Rice (Cleveland), Freddie Gray (Baltimore), Sandra Bland (Hempstead, Texas), and Ricardo Diaz Zeferino (Gardena, California)—nothing could have prepared any of us for the horrific mass murder of nine African Americans in their church in Charleston, South Carolina on June 17. Nor could we have predicted the profound and collective forms of grief and shame that immediately followed the massacre in this state, not least in the capital city where I teach, in which the alleged shooter and avowed white supremacist, Dylan Roof, had been raised. Even before the weight of the tragedy had fully sunk in, when the news had just broken and the manhunt for Roof was still on, I remember reading on my computer screen that he was from Columbia. Suddenly, in a panic, I rushed to open my university directory and type in his name, thinking to myself (a nonbeliever), “Please God, don’t let him be one of ours.” The fact that my brain would even go there seems, in some respects, a little embarrassing. (I have never known of a single student here who draped himself in the Confederate flag or publically spewed hate speech.) That it did, however, speaks to the difference it made for those of us who live here that the suspected killer was homegrown, and that the flag he posed with online was prominently displayed by our state on its capitol grounds, at the literal center of town. [3 ] It was all the more meaningful, then—not least for all who had tried to bring that flag down for decades—when hundreds and then thousands of people gathered together at that very spot: first in deep mourning; then to call for the flag’s removal; and, finally, to cheer en masse with unbridled joy and relief when it finally came down.

Cheering the Removal of the Confederate Flag

It was just weeks later, then, when many here were still reeling, that students and I showed up for this new course that didn’t really yet exist. I had named it, and briefly described a path we might try to map, but I knew I wanted to invite students—needed them—to engage in the process with me of figuring out what questions we should be asking. Their response to this call—the eagerness with which they engaged a wide range of materials to better understand a host of relevant issues, the astute questions they formulated, and their investigation of them through compelling, original forms of critical and creative work—at times astounded me. And our work together, the community we made and the critical passions it seemed to nurture in so many of them, and in me, to continue our work in the course beyond it, became an even more enduring source of hope than the jubilant removal of that flag.

I feel several risks in writing about this experience, but they seemed worth taking. And I look forward to continuing this story. This much already, though, moves me to reconsider Obama’s insight, cited above, upon eulogizing Clementa Pinckney, and guiding all who mourned the Charleston Nine. The President was inspired by Pinckney’s own wisdom about the failure to recognize others different from ourselves: “Across the South, we have a deep appreciation of history, [but] we haven’t always had a deep appreciation of each other’s history.” In registering this as a national truth, too, Obama’s wisdom now resonates especially loudly as millions grapple with the question of how it has come to pass that white nationalists have friends in the White House. Knowing this question will occupy us for years to come, I take some comfort now in my sense that so many of my students—black and white, LGBTQ and not, from “red” suburbs and small towns as well as “blue” cities—want to understand other people’s history, media, and experience in part because they know about some of the damages of not doing so in the places in which they grew up and to which they are likely to return, or at least visit. This gives them, and students from so many places where people now appear to be comfortable with the rhetoric of white nationalism, the potential to be exemplary agents of change.