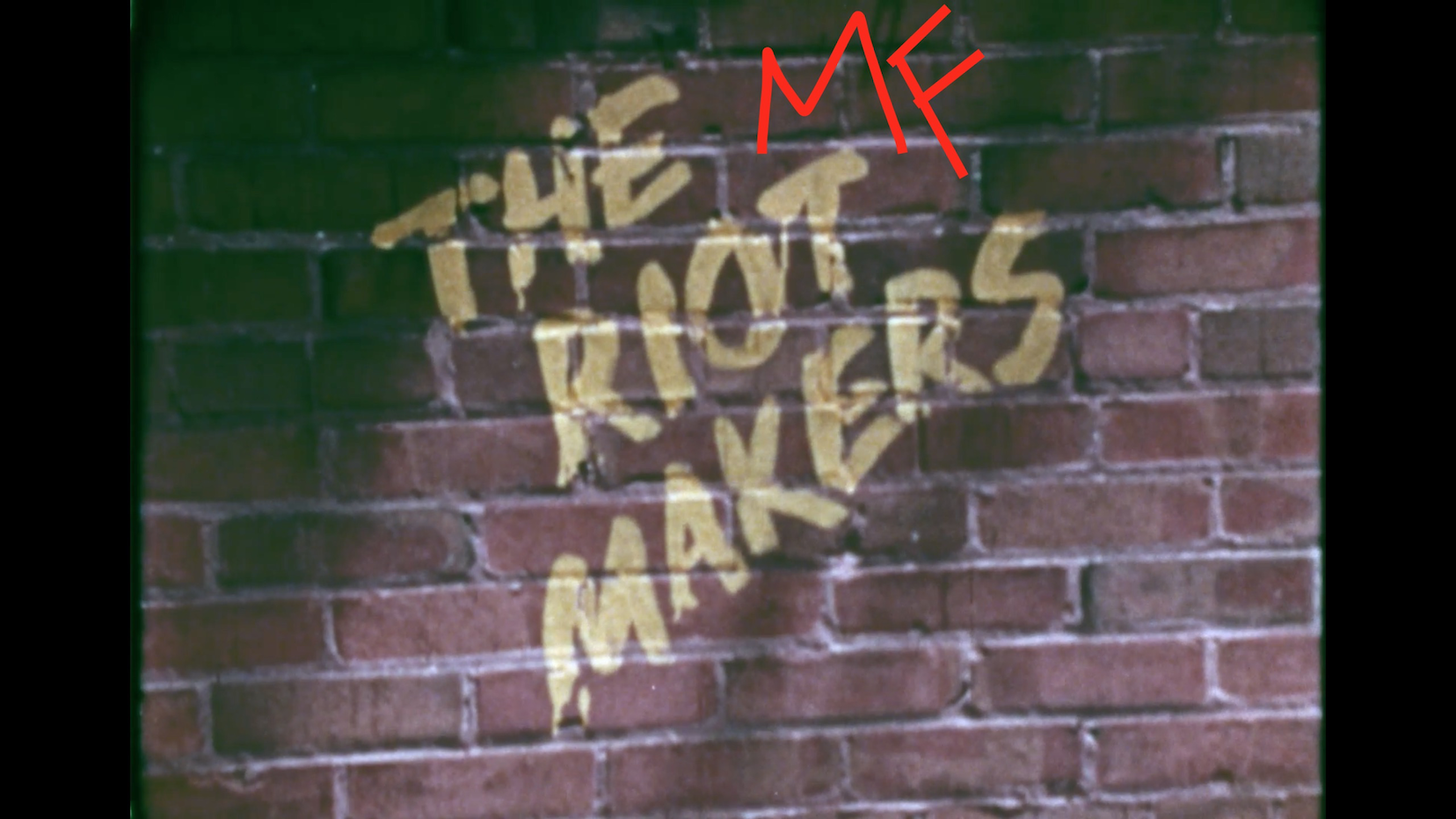 A Visual to Accompany This Love Letter

Teaching race and media studies to undergraduates has felt to me recently like never before. I began trying to explain this difference in two previous columns, inspired by an incredible classroom community in which I first felt it most intensely. In those columns I focused, respectively, on unfolding and unpredictable historical contexts that profoundly shaped the formation of that community, and some pedagogical strategies that also played a role in the work that brought us together. But if I step back a bit further to reflect more generally on the generation of undergraduates moving through my classrooms at the University of South Carolina in the last couple of years, the simplest way to describe what often seems different from previous generations—albeit different in varying degrees and with significant variations from class to class, and student to student—is that the limits of the ideology of colorblindness seem to be more readily apparent to more students than ever before, white as well as not.

I see at least two signs of this shift across a variety of courses, from introductory courses in media analysis and history to upper-level topics courses of various kinds. First, and due in no small part to the circulation of viral videos of police brutality from seemingly everywhere in the country (as discussed in my last column), I find it easier now to get students to think concretely and seriously about racism as not simply a matter of bigotry (e.g., bad individuals, or “bad apples,” thinking and doing bad things) but as involving a wide range of systemic practices, past and present. The second sign, at times related to the first, contrasts from the way that commitments to colorblindness (for good and for ill) have for so long manifested in the classroom in deafening forms of silence about race, or what has been called colormuteness—be it born of genuine resistance (which also seems on the wane, although this also may have to do with other kinds of silence) and/or just real discomfort, even anxiety, at being invited to discuss a subject students are routinely taught should not matter, which is to say should not be seen (even though they are surrounded by cultural forms that insist upon its visibility, or at least on the visibility of all races other than white), and perhaps above all should not be spoken (at least not in class, with authority figures who will grade you, and so on). In this regard colorblind is a curious misnomer insofar as popular U.S. culture has trained us all to (think we can) see race, but not to speak of it. Put otherwise, we have never been (collectively) colorblind, but we have long been colormute. But this also seems to be changing. Not least because when students (like the rest of us) encounter (yet another piece of) compelling audiovisual evidence of even the possibility of systemic, institutional forms of racial injustice, the fantasy of living in a colorblind society is hard to sustain. Pedagogically speaking, then, the two shifts just described mutually feed each other in the classroom: grappling with the multiplicity and complexity of practices potentially at stake if we want to understand the (ongoing) history of systemic inequity gives us a lot to discuss, and a willingness (and at times even an eagerness) to talk about race obviously facilitates developing such discussions in rich, engaging, and productive ways.

If this attempt to describe the shifting grounds of racial thought and talk in my own classrooms is at all accurate (and I realize my observations, memories, blind spots, hopes, etc. are by no means scientific or representative), there is cause to be excited about new pedagogical possibilities—for developing more substantial and pragmatic conversations about race in undergraduate classrooms, engaging a larger cross section of students, and generating in the process new forms of insight, dialogue, and change.

In that context, I want to stress how vital it was for the remarkable learning community introduced in my previous columns, “Mediating Ferguson, USA: 1915-2015” (MF), that it was made up of not only an excellent group of students (careful readers and sharp thinkers, great listeners as well as talkers, etc.), but also that this group was the most diverse of any class I have ever taught, and in most every conceivable way. In another sign of their generational edge, several of these students arrived to the class already speaking the language of “intersectionality” (which, when I later asked, some told me they first learned from “the internet” and “Tumblr,” as well as “a sociology class”). More to the point, since students routinely spoke from the vantage of their own (multiple) social positions and experiences, we all learned a good deal about things intersectional from each other, and this became a vital dimension of the class. As we discussed a wide range of media histories, forms, and practices, and their intersection with a still wider range of social histories, students astutely linked particular dynamics of identity and difference animating our materials to examples of their own: growing up in particular kinds of places (variously white, black, poor, middle class, rural, suburban, cosmopolitan, etc.); confronting expectations of public schools and private schools, high school cliques, college dorms, and “Greek life”; and navigating assumptions of police, teachers, friends, family, and so on.

In sharing their stories, members of the class gave names and faces we all came to know to social dynamics and critiques that might otherwise have felt distant or abstract. On multiple occasions it made sense for me to call out the implications of my own whiteness, variously in relation to my gender, my position of authority, my openly bigoted relatives, the relatively high quality of public schools afforded to my children by our zip code, and so on. More soberly, an African American woman, who I’ll call Andy, told us on the first day of class that she was taking it because she had a younger brother and was afraid for his life. Over time Andy shared more about her brother, the limited options he faced, and choices made in that context, such that at a latter (relevant) point in the term someone else invoked “Andy’s brother” and the issues she had brought alive for us all in discussing him.

The power of such personal stories in this class was remarkable, enabling many vivid moments of insight and recognition, as well as a larger collaborative ethos of self-reflection, trust, and serious dialogue. At times I could literally see faces in the room learning from one another, across our many differences—be it white students wholly absorbed by black classmates sharing experiences and frames of reference utterly unlike their own, or black students listening and responding to white students, and to other black students with at times profoundly different experiences of class, gender, sexuality, and more. Such exchanges were not always marked by consensus. I have distinct memories of one woman bursting suddenly into tears in the midst of a class discussion, and of another struggling to contain her palpable outrage. But we worked through such moments, which were far outnumbered by more routinely peaceful (if often still intense) ones, as well as many shared critical and aesthetic pleasures, and a lot of good humor.

This last was signaled by how enthusiastically the class embraced the moniker used in this column’s title, which I unthinkingly gave them upon darting off group emails (via Blackboard, always in haste) addressed (in an abbreviation of the course title), “Dear MF Students.” Only after screening Do the Right Thing one day with another class did I suddenly realize the obvious offense students might have been taking (!) at being addressed in this way. But when I next came to class and profusely apologized for my gaffe, they laughed and collectively insisted that I keep using the nickname. Later, after I showed them some police training films from the late sixties and early seventies, including a hard right film entitled The Riot Makers, which tells a history of mass protest linking hippies and black people to Hitler and Stalin (!), the class nickname expanded with a reclaiming of that crazy film’s title. We even talked about making t-shirts to declare ourselves The MF Riot Makers. (Although t-shirts never materialized, the wish and my ongoing gratitude for all my MF students continue to teach me—far more, in fact, than I have described here—inspired me to doctor the title credit image that accompanies this column.)

Most of all, however, having never experienced anything quite like what I did with this remarkable class in twenty years of teaching and my own education before that (all at public institutions), the experience drives home how much is at stake in the challenges that remain to further diversify our predominantly white academic institutions. Increasing access for students and faculty of color is, certainly, the right, equitable thing to do. What’s more, significantly diversifying the voices in the room can transform the possible conversations all of us can have, and the new forms of knowledge and practice our institutions can produce.