The work of scholarship is, in most of its iterations, a fairly placeless activity – we write and communicate in ways that feel atomized and disembodied, and then periodically come together in conference hotels to present and discuss our work. I have vague recollections of the cycle of Hiltons and Sheratons that have hosted SCMS, for example, but for the most part, those environments are generic biospheres, only occasionally punctuated by brief forays into the local community. We might dash off with friends to grab food or sneak out to a record store, but the work of the conference is largely contained in its host hotel.

When I reflect on the remarkable ongoing experiment of Flow, though – both the website and the conference – I’m struck by a recollection of the spaces, both physical and virtual, within which Flow emerged. If there’s a lesson I find in those recollections, it’s how extraordinarily important it is to create environments within which meaningful conversations can happen. Place matters. 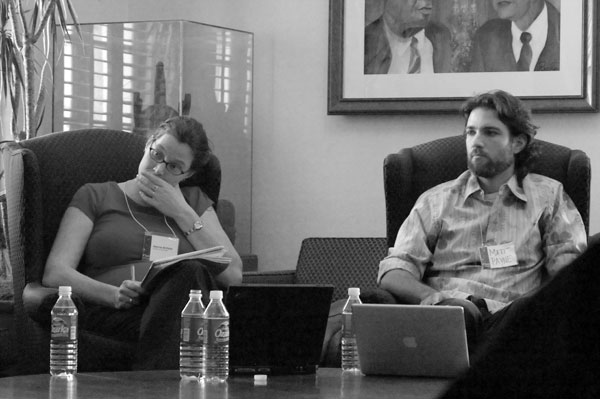 As a matter of prehistory, two formative academic environments are, for me, central to my understanding of the ethic of Flow’s community. The first is the graduate program I emerged from, whose ethic I sought to cultivate as a new faculty member. The regular Thursday colloquia of the Media and Cultural Studies program at the University of Wisconsin (and subsequent debriefs at the Red Shed bar) constituted my first true intellectual community, and it remains my referent for what it means to interact both casually and deeply with peers and mentors. The second is Console-ing Passions – the feminist tv and media conference that has shaped the intellectual development and convictions of two generations of media scholars. Those two environments – one intentionally and explicitly feminist, the other, in its best moments, an exercise in feminist pedagogy in practice – taught me to value community and conversation over formal presentation.

At UT, when Avi and Chris asked me to join them in inventing something new, place mattered, too. The physical spaces where our first conversations happened – like the Cactus Café or Little City Coffee, or the wretched fluorescent-lit classroom where Avi, David, Alexis, Allison, and I spread out the first proposals for our experimental unconference and nearly panicked over the seeming impossibility of imposing order on them – are still fresh in my memory. So, too, are the rooms in our first conference site, the Student Union with its dark-paneled halls filled with portraits of Texas governors, as well as the late great Dog and Duck Pub, where we closed the conference with a shared celebratory beer. Our first few screenings – initially at the Alamo Drafthouse, and eventually amid the animatronic snake-infested seats of the Star of Texas theater – were important, too, for they concretized the joy of participating in a shared media culture. 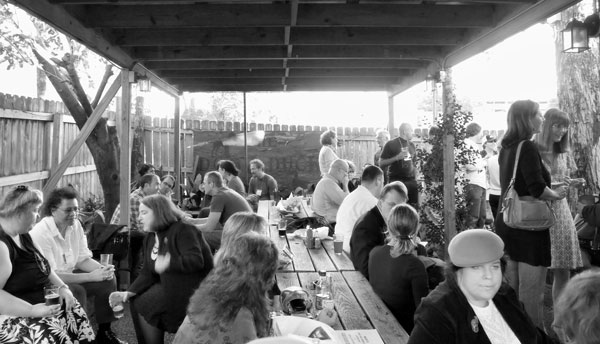 The Dog and Duck Pub, site of many enthusiastic post-conference conversations.

Some of this, of course, is probably uncritical nostalgia – but for me the bigger lesson is that the most cherished moments in my academic life have taken place in places like this – environments which fostered conversation, interaction, an enthusiastic, open-ended talk. Flow, at its best, remains one of our field’s very best expressions of that generous spirit.

Looking ahead, I want to take this excuse to offer some unsolicited advice:

First: pay attention to geography, both physical and virtual. Flow is all about conversation, and at its best it’s like a party with every guest squeezed into the kitchen talking. To whatever degree possible, continue to experiment with ways to expand Flow’s spaces of interaction, in order to bring others into the conversation.

Flow at its best, “with every guest squeezed into the kitchen talking.”

Next: talk to strangers. Chance encounters are often far more enriching than those we seek out, and Flow benefits when we enlarge the pool of people with a stake in the conversation.

Even more importantly: network out and down, not up. We all have arenas of our intellectual life in which we are experts and relative authorities, and everyone benefits when we reach out generously to newcomers – to the junior professor, to the smart but bewildered undergrad, to the new shy grad student, to the un/underemployed scholar who feels like a leper at an academic conference. I love to catch up with the senior scholars at UT and elsewhere who have been kind and supportive of me when I needed it, but I think the best way to honor their generosity is to extend the same to others. We recently hosted the Console-ing Passions conference at Notre Dame, and we created a plenary of amazing emerging scholars who discussed their experiences adapting to shifting career demands and opportunities. It was a highlight of the conference, and it helped to build precisely the kind of rich community interaction that I have so often found at Flow. If you find yourself in command of resources, share with those who don’t have them.

Perhaps most controversially: don’t be afraid to explore new spaces and opportunities. Flow is inextricably tied to the remarkable graduate community of UT, and that won’t change – but if an opportunity arises to host a Flow event or conference elsewhere with new collaborators, don’t reject it out of hand. Generosity is its own reward, and it only strengthens the core values that make Flow such a cherished part of our academic lives.