Like my fellow organizers, my goal with the first Flow conference was to bring together media scholars, producers, and fans. From my own perspective, I felt it was important to collapse the distances—conceptual as well as spatial—between artist and audience, media scholar and media professional. Given the number of industry studies we were reading as RTF students it made sense that the studiers and the studied should be assembled in the same room, especially since it takes some effort on the part of scholars to get in contact with industry professionals in order to conduct interviews and ethnographies. The same was true for fan communities. With all the burgeoning research on fan culture, it seemed important to bring scholars and fans as well as fans and media professionals together. While fans and showrunners often congregated at fan conventions, it seemed like a conference with a slightly more scholarly cast could engender a rich exchange of ideas. As conference organizers we wondered what kinds of questions would be generated by this “un-conference”. How might Flow change, bolster, or challenge scholarly, professional, and fan perspectives?

In addition to industry and fan studies, then as now there was copious research on the representational politics of television and new media. At the time of the first Flow conference, Barack Obama was not yet president and Shonda Rhimes was, if not at the beginning of her career, then at least at the beginning of her fame and popularity and scholars were raising questions about the limits of mediated representation along the lines of sex, gender, race, class, ability, and age. In addition, media scholars were asking questions about representation behind the camera as well as in front of it. Research from a number of media studies and communications departments around the US showed that women and people of color were not well represented among media professionals. It was important for us to get scholars in a room with industry professionals to address these concerns around diversity and representation. How well this worked out is difficult to determine. A decade after the first Flow conference, television seems to be broadening representation of formerly marginalized identities. How well it’s doing so is open to debate but perhaps more importantly, as the Matt Damon Project Greenlight incident and recent scholarship indicate, diversity behind the camera is still a problem.

One of the goals for the conference was to problematize or rethink the definition of television. This was an endeavor that had been emerging within television scholarship for some years, given the development of reality or so-called “non-scripted” TV as well as talent-based contest programming and the serial format. At the first Flow conference in 2006, in fact, Lost generated quite a discussion. While Flow welcomed questions and panels about the contemporary developments on network and premium cable, we thought it was important to also examine grassroots, avant-garde, and activist television production. If, like all media forms, television has the power to shape the stories we tell about our societies and ourselves then it was important to us to examine how TV could be used in the service of equality and social justice. For example, how can training in television production allow citizens to voice their concerns to the powerful, or allow marginalized people to gain access to professional opportunities within a mostly white and upper class culture industry? How can popular political expression or more diverse cultures of production challenge representations of class, race, gender, sexuality, age, and ability? How can we create TV that changes the story to be more inclusive, or to work on TV narrative to make stories that might create enough of a social ripple to change social policy?

To address these questions I moderated the “Radical Television” panel. For me this roundtable was crucial because it kept the spirit of the conference from a different angle: if an “un-conference” could collapse conceptual and spatial distance between the culture industries and its fans and scholars, then it was also important to collapse the distance between media producers and consumers that is, to put production in the hands of nonprofessionals. The panelists were all involved in media production in some way, either as instructors or activists. One instructor worked with underprivileged students, mostly students of color, teaching them how to shoot and edit videos that reflected their own experiences. He noted that many of his students weren’t that interested in video production, and that this lack of interest was highly gendered. While some of the female students were interested, the male students set the tone, and therefore the female students, not wanting to appear unattractive to the men, deferred their interest in video production. 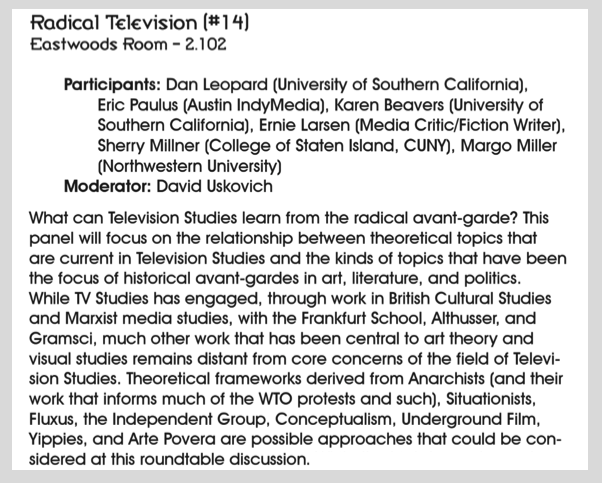 In any case, this lack of interest may have had to do with the fact that video production was far clunkier (and perhaps this was discussed by the panelists) than it is now. At the time of the panel, the technologies of radical television were primarily camcorders (though footage was edited on computers). Ten years after the first Flow conference, the ubiquitous smartphone has enabled ordinary consumers to shoot, edit, and upload videos on and from devices that fit in the palm of the human hand. Such accessible technology doesn’t always square with the “radical” part of radical television or the populist sense of democratic communication. Indeed, smartphones make our privacy vulnerable as well as create a culture in which we are bombarded with the endless minutia of peoples’ lives. This latter point is not necessarily a “bad thing” since it enables us to stay in touch with friends and loved ones but it might make the case that readily accessible technology does not a more democratic society make.

At the same time, without the smartphone, the world would not see the Arab Spring, Occupy Wallstreet or Black Lives Matter protests with such intimate detail, nor the horrifying deaths of Eric Garner, Alton Sterling, or Philando Castile. What would such a panel look like today, given the arrival of the iPhone a mere eight months after the first Flow Conference of Television and New Media? I hope that future Flow conferences will continue to rethink television and its relation to diversity, representation, and the democratization of media production.