Ten years ago I’d never heard of an “un-conference.” Now they are a fading fad. I’m not bold enough to claim that we invented the media studies “un-conference,” but I am certain that some of our motivations for the Flow conference stemmed from frustrations often felt in the humanities: not enough opportunities for talk and way too much talking just to be heard. I think we were successful in addressing the first concern and perhaps guilty of perpetuating the second. In fact, I suspect that one of the reasons the “un-conference” has become unpopular of late is the sense that the conversations they produce don’t amount to any fundamental changes to the field or the media studies mission. At least traditional conferences are seen as possible outlets for testing driving article drafts and promoting book projects.

Before we throw the proverbial baby out with the bathwater and accept that we are just another traditional discipline too invested in our own insular conversations to be bothered with alternative presentation (and publication) platforms, I’d like to propose that we revisit an aspect of the “un-conference” that Flow most definitely did not pioneer, but has become a staple of the digital humanities un-conference circuit: the Hack-and-Yack. Hack-and-Yack refers to a set of intersecting (though sometimes also competing) practices at un-conferences wherein scholarly conversations are complemented by efforts to “make” digital tools that elucidate, complicate and facilitate scholarly interventions. I learned how to make a twitter-bot at a THATCamp un-conference even as I engaged in provocative conversations about twitter-bots as culture jamming versus cultural critique (versus techno-fetishistic wastes of time). While in the DH world, Hack-and-Yack has increasingly become a polarizing and unproductive “hack versus yack” argument, my takeaway from THATCamp was the mutually constitutive possibilities that emerged when the definitions of “making,” “tools” and “scholarship” were tested and intersected. Hack-and-Yack might offer a usable framework that media studies could adapt for the purpose of transforming not-fully-formed ideas into sustainable experiments that forge new approaches within the field.

The Hack-and-Yack structure might offer opportunities for discussion, collaboration, production, and presentation.

What if the Flow conference served as an incubator for new modes of scholarly production, distribution, aggregation, annotation, argumentation, engagement and intervention, with the Flow Journal serving as a platform (or a “spreadable” brand) that sponsored these emerging projects? What if we re-calibrated roundtables as planning sessions with the explicit outcome a proposal draft that could be presented to all conference attendees at a showcase event? Wouldn’t it be great if we could invite representatives from granting agencies like the NEH, SSRC, NEA, Mellon, MacArthur, etc. to serve as informal evaluators at this event?

My goal here is not to diminish the importance of talk as productive labor. There is little doubt that sharing ideas is an essential stepping stone for generating more complex understandings of our media industries and practices as well as for potentially shifting paradigms for how our field operates. But the process of moving from creating knowledge to creating works that disseminate knowledge beyond a small number of privileged conference participants is often left unfinished when the three-day gabfest ends and we return to our homes. Sure some of these ideas find their way into our classrooms and even our publications but these seem like small returns on our investment in trying to flip the conference on its head. Instead, we might look for ways to channel talk into new modes of engagement with our desired audiences, modeling alternative modes of media production, media consumption, and media analysis.

Truth be told, there are already a range of media studies projects that borrow from Hack-and-Yack principles by looking to create media even as they aim to study its impact. We might look to AJ Christian’s phenomenal Open TV project as a model for producing, distributing and studying online queer television. Or we might learn from the Organization for Transformative Works initiative, spearheaded by Karen Hellekson, Francesca Coppa, Rebecca Tushnet and others, which has brought together fans and scholars to both archive and study fan creative works. Or, we might draw inspiration from the work Jason Mittell and Christian Keathley have done creating workshops that train academics in videographic criticism and, in conjunction with their collaborators Catherine Grant and Drew Morton at [in]Transition, producing an open review publishing platform for these works. 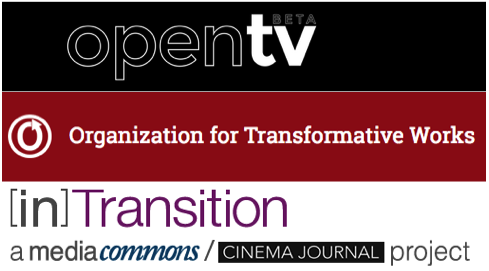 Logos for Open TV, OTW, and [in]Transition, all projects that create media as they study it.

We don’t have to start with anything nearly as ambitious or impressive as these projects, but we should start by recognizing that they all emerged out of intensive and inspiring conversations that went beyond the talking stage. Let’s start small. I’ve created a Youtube channel for the conference: (over)flowTV (with much thanks to Will Brooker for coining the term – even if I am using it out of context). Let’s imagine what we might do with it to propel our yakking into hacking.