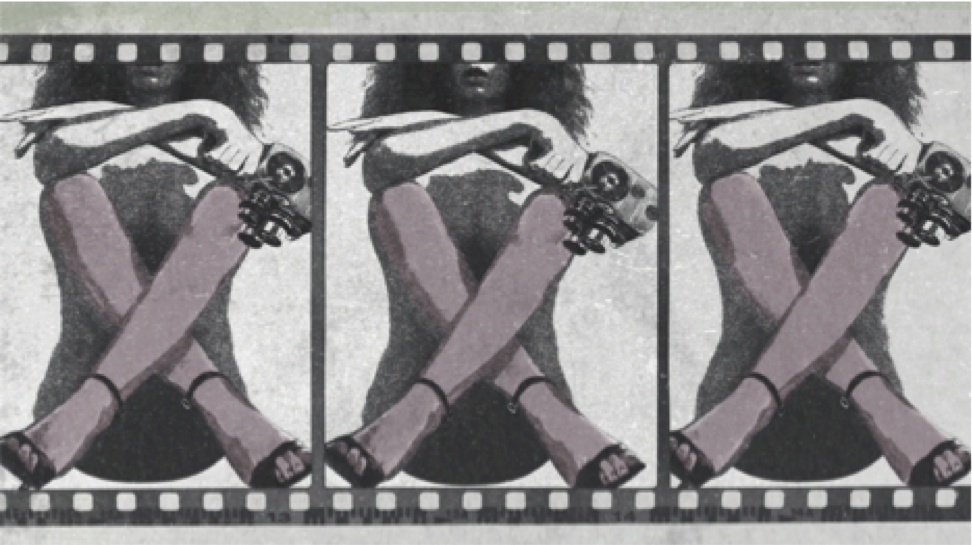 Concerning sexual penetration, “proof” of orgasm, and conventional filmic displays of female pleasure, this scene practically stages Linda Williams’ well-worn dictum that hard-core pornography “seeks maximum visibility in its representation but encounters the limits of visibility of its particular form.”[1] In mainstream heterosexual porn production, where the industry-standard “money shot” serves as visual confirmation of male satisfaction, conversely, women’s overdubbed voices do the work of sonically signifying orgasmic bliss, becoming “aural fetishes of the female pleasure we cannot see,”[2] while also further revealing “the inability of a phallic visual economy to imagine female pleasure as anything but insufficiency or excess.”[3] Additionally, Eithne Johnson argues that, “at the site of the female body,” this disembodied sonic excess is “displaced onto the ‘body’ of the film, where it functions as surplus semiotic material.”[4] As an immediate example, listen to the overdubbed vocal work of a female performer added by Candy after recutting the aforementioned climax sequence and how The Deuce crosscuts Candy examining her film with a sex scene of its own:

Given HBO’s own scopophilic tendencies concerning the objectification of women in many of the network’s premier shows,[5] as with punk and disco, we again find an attempt at both sonic historiography and immanent critique in The Deuce’s aesthetic engagement with female vocal performers’ affective labor.

We hear the electric hum of Candy’s 16mm projector running film, its monophonic speaker emitting the thin sound of a woman moaning, her voice unmoored from any image, from any sense of corporeal verisimilitude,[6] then the far more convincing sex sounds of Abby and Vincent in bed with heavy breathing and Abby’s own voice coming out in arhythmic fits of pleasure. Then back, the overdubbed voice in Candy’s film becoming almost laughable while also sounding more like ecstatic whimpering or even cries of pain.[7] Comparatively, Abby and Vincent finish, yet with a notable lack of spectacularized pomp or circumstance, but then Abby intones a deep “mmhmmm” between breaths, suggesting satisfaction. The film likewise finishes and we hear the sound of leader tape slapping the take-up reel as it spins out, clicking rhythmically with every pass as Candy lights a cigarette—we’ve just seen Vincent reach for his—then exhales. Notably, her own satisfaction seems uncertain.

Within a simultaneously emergent audio culture outside the production of moving-image pornography, the female voice as a fetishized sonic object flows between myriad forms of media while repeatedly servicing the same phallic order of hard-core porn’s visual economy. In the broader context of Seventies sexology, Jacob Smith demonstrates how erotic LPs marketed as “instructional” records routinely featured women vocalizing orgasms in order to “sonically index” particular sex practices while also arousing listeners.[10] Likewise, John Corbett and Terri Kapsalis track technologically mediated acousmatic women through a multitude of pop songs that further work to reproduce these “aural codes of sexuality.”[11] “Do it to me again and again,” Donna Summer moans on her disco classic “Love to Love You, Baby.” In Moroder’s extended mix, she performs a “marathon of 22 orgasms”—a writer at Time magazine apparently counted them back in 1975.

As evidenced here, I am inclined to follow Eric Schaefer’s argument that, throughout the late 1960s and 1970s, “a rapidly and radically sexualized media accounts for what we now think of as the sexual revolution.”[12] However, this media revolution was likewise accompanied by a censorious scientism that, as if attempting to re-suture the audible excess of female pleasure back onto women’s bodies, worked to reinforce staid representations of ‘tasteful’ sexuality.

Exposed Legs & the Legibility of Excess

In my previous column on The Deuce and disco, I gestured toward the fact that, throughout the 1970s, urban sound, acoustic research, and the politics of cultural production converged within a revised discourse of noise pollution where familiar sexist visual tropes of female promiscuity emerged in politically motivated projects aimed at ‘cleaning up’ U.S. cities in the name of sexual sanitization. Recall the acoustician who cited a New York discotheque as the loudest source of noise in the city, writing that “the miracle of electronics allowed performers to create a sound level as astonishingly elevated as the dancers’ hemlines.” And while analogizing short skirts and noise during this time was by no means exceptional, as with The Deuce’s second season, we can move from New York to LA to find a most extreme instance. 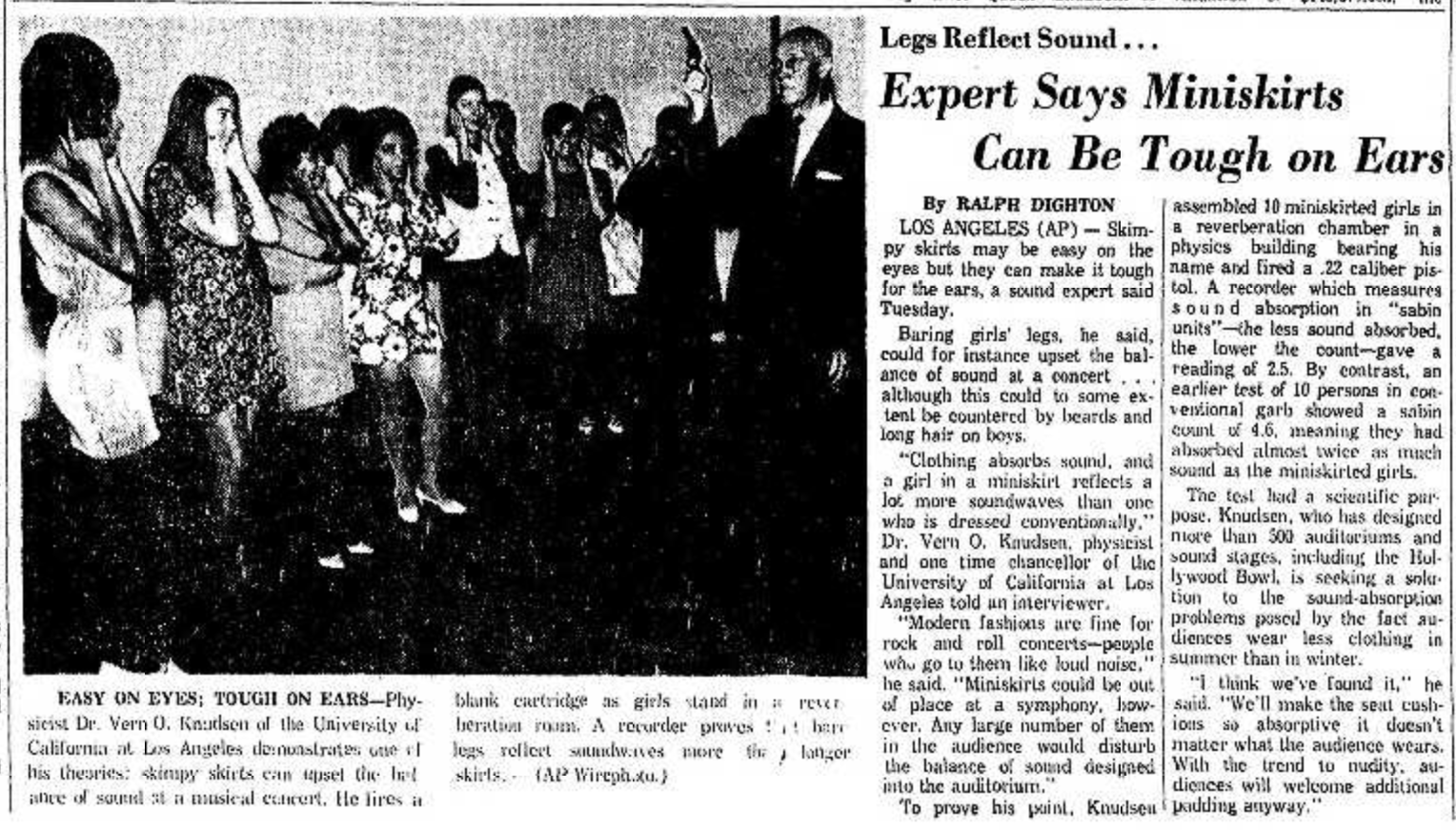 Newspaper rendering of physicist Vern O. Knudsen measuring reverberation from the sound of a .22 caliber pistol.

“Dr. Knudsen fired a pistol in a room with 10 miniskirted girls,” reads an account of this famed acoustician discharging a blank cartridge in a UCLA physics department’s reverberation chamber along with ten women in short skirts to measure the level of sound reflection off their exposed legs.[13] Using an acoustical unit of measurement for sound absorption, Knudsen recorded a sabine count of 2.5 that he compared to a test conducted back in 1964 with more thoroughly clothed subjects where reverberations from the gunshot had registered 4.6 sabines.[14] In conclusion: Knudsen used his gun to prove (an already well established fact, mind you) that “as skirts go up, sound absorption goes down.” Associated Press science writer Ralph Dighton’s descriptions of the “experiment” received notable traction in trade journals and city newspapers, with headlines ranging from the pedantic, “Acoustical Test Shows Miniskirts Affect Sound,”[15] and the epigrammatic, “Miniskirted Girls Long On Sound,”[16] to the prolix, “Honey, Your Miniskirt Looks Great, But It Sounds Awful,”[17] and the prognostic, “Miniskirts Bound To Be On Way Out.”[18]

While Knudsen’s ostensible concern involved modern methods of concert hall design utilizing sound-absorption coefficients that accounted for heavily clothed audiences—coefficients reportedly threatened by women’s skin—my reason for comparing his “experiment” (and the rhetorical trope of the miniskirt at large) with that of moving-image pornography’s aural fetishization of female pleasure is to highlight a certain epistemological affinity between ways of seeing and ways of hearing where shared vectors of power, difference, and knowledge converge through science, aesthetics, and cultural politics alike. “Modern fashions are fine for rock and roll concerts,” Knudsen claimed, “people who go to them like loud noise.”[19] But for classical music, he suggested “seat cushions so absorptive it doesn’t matter what the audience wears. With the trend to nudity, audiences will welcome additional padding anyway.”[20] Thus, in Knudsen’s spectacularized stunt, exposed legs became both source and synecdoche of unwanted sound when acoustical engineering attempted to take an aurally perceived (and culturally determined) excess and make it visibly legible on women’s bodies. 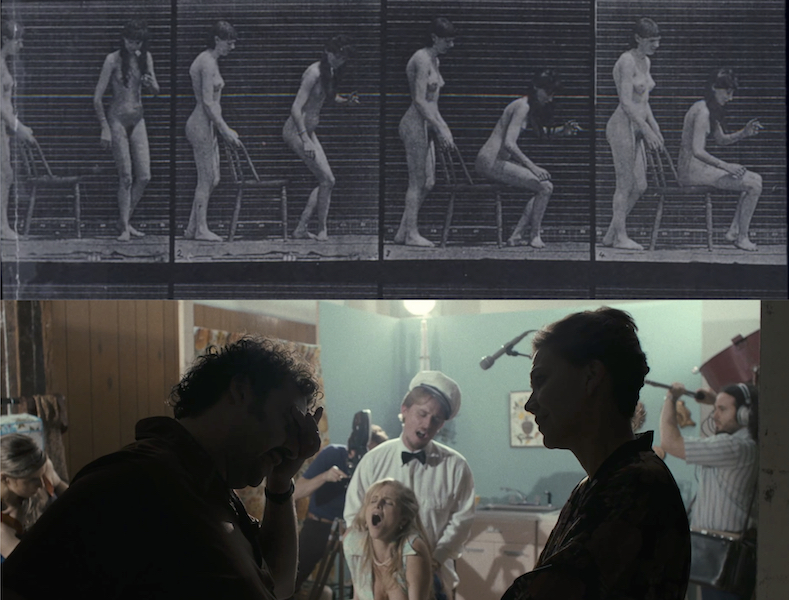 Accordingly, where Linda Williams recognizes in the protocinematic photography of Muybridge a “scientific impulse to record the ‘truth’ of the body”’ that constructed “women as the objects rather than subjects of vision,”[21] by attending to sound as a culturally contested mode of knowledge production concerning human bodies, convergent bodies of knowledge, and the sonic production of social space, we find a similarly motived acoustical discourse where old prurient fears of an unruly eros have been quite literally re-envisioned in sonic terms. And from the porn industry’s frenzy of the audible to an industrious scientism that sought to elide undesirable sounds, in the 1970s, as the tagline for The Deuce Season Two tells us, “pleasure was a business, and business was booming.”