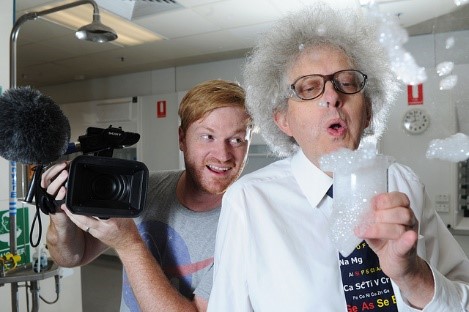 In a recent special issue on paratextual research, edited by Robert Brookey and Jonathan Gray, I made a case that universities have become increasingly deliberate producers of media paratexts. [1] Exploring how organizations other than media companies produce screen content to trail, extend or provide “bonus material” on their world, I have found myself strangely drawn to online video shorts made by university “digital engagement” teams, student vloggers, and video agencies and freelancers specializing in the education market.

In part, this has been a matter of making sense of my own, unremarkable, contribution to these forms of digital promotion, beginning in 2009 with a Faculty-produced video to promote the value of arts research. Shot in alarming close up by a professional video journalist (Brady Haran), my reflections on the value of studying television idents have taken nine years to scrape a thousand views. More remarkable is an ongoing series of digital shorts called the Periodic Table of Videos (PTOV) made by the same videographer with another academic at my university, the eminent chemist Professor Sir Martyn Poliakoff. 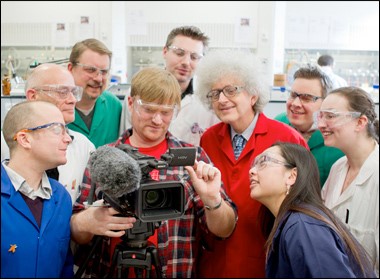 The video series is remarkable in different ways, not least in its hybridity as a form of digital “content-promotion.” [2] The series is neither an educational lecture nor a form of institutional branding. Using the affordances of YouTube to deliver science to the public in new ways and “communicate the excitement of chemistry with young people,” [3] PTOV has more affinity with the world of webisodes than MOOCs or university marketing.

Launched in 2008, PTOV features Poliakoff and a team of lab chemists performing quirky experiments to present the 118 elements of the periodic table, each element having a separate video. Offering a reality-style portrait of life within a chemistry department, the series has developed characters, chemistry spectacles and scientific storytelling beyond the original focus on the periodic table; it includes upwards of 600 videos about molecules, reactions, chemistry-related news (e.g. the helium leak at the Large Hadron Collider), “road-trip” films to significant chemistry destinations, and themed videos during seasonal events like Halloween and Christmas. With Poliakoff’s engaging manner and Einstein-like hair, the video series has become one of the top chemistry channels on YouTube, with an audience in over 200 countries.

Haran and Poliakoff have written about their collaboration and acknowledge the problem of evaluating the success of their venture through data such as YouTube “views.” [4] However, the metrics provide an interesting comparative picture. PTOV has more subscribers on YouTube than the channels for Harvard Education, Stanford Education, OU Learn, Chelsea Football Club, the British Royal Family, and the BBC’s Doctor Who, PTOV exceeding a million subscribers in December 2017. Measured against these channels (selected by Poliakoff as a way of evidencing research “impact,” a new necessity within British higher education), as of March 2017 PTOV had the greatest number of “likes” of these educational and popular YouTube sites, and the second-highest number of comments (22,112), views (154,010,979) and views for a single video (17,157,763). Indicative of the playful nature of PTOV, sixteen videos have exceeded a million views, among them experiments that involve dipping a cheeseburger in hydrochloric acid and putting cans of Coke in liquid nitrogen.

Can of Coke in Liquid Nitrogen – Periodic Table of Videos

Just as Bonni Stachowiak has discussed the transformative power of higher education podcasts in a recent issue of Flow, PTOV invites us to consider the transformational power of online videos produced, circulated and shared beyond the conventional domains of educational filmmaking. Relevant to the themes of this special issue, the series also invites thinking about digital promotion within higher education. Anne Cronin coins the term “PR University” to describe the way that promotional logics, and public relations (PR), have become an integral part of university thinking and management practices within the UK. [5] In particular, she examines the way that UK universities have come to stage competition, distinctiveness and “reputational capital” through the media. However, she notes that “this mediation is complex and unstable,” the PR University setting “into motion dynamics of audit and media visibility which are unpredictable and generate their own logics which begin shaping universities’ promotional and managerial practices.” [6] Poliakoff explained to me that his interest in the potential of video was sparked watching science trailers produced by Brady Haran as part of a corporate communications primer he was obliged to attend by university senior management. Given these origins, the unpredictability of the PTOV series is perhaps the way it has developed without any direct involvement from university marketing personnel.

If the series has a PR function, it is for the discipline of chemistry itself. And yet, there are also distinct brands at play in PTOV that speak to the complex engagements of university promotional logics: the brand of the series, the University of Nottingham as locational and institutional home for the videos, and that of Poliakoff himself. As the PTOV series has developed and its fan-base has grown (Poliakoff has received numerous periodic table themed gifts from around the world as well as requests for signed photos) videos have focused more frequently on the life of “the professor.” For example, Poliakoff’s visit to the Commonwealth Science Conference in 2014 resulted in a short video montage of the professor’s selfies – so-called “proffies” – during the trip. Other videos include a web eulogy to Poliakoff’s lifelong friend, the historian Tony Judt (“A Toast to Tony”), and shorts to mark the occasion of Poliakoff receiving a knighthood in 2015, where the citation referred to the professor’s YouTube success with Periodic Table of Videos.

“Knighthood for the professor”

“Knighthood for the professor” is a celebratory moment where Poliakoff acknowledges the honor but reflects openly, and generously, on its wider personal and professional meaning. It also suggests the different functions of the PTOV series as content-promotion. For subscribers of the channel, it is a bonus feature, expanding the world of PTOV in the same way as a DVD extra. And yet, the success of PTOV also feeds back into university PR dynamics, not only in the way that Haran has been contracted to produce other video series for the University of Nottingham as a freelance videographer – Sixty Symbols (physics), Computerphile (computer science), Bibledex (theology), Words of the World (languages) [7] – but also in the way that Poliakoff, as in the video above and poster below, has been “claimed” by the University as an eminence, individual and face of public engagement. 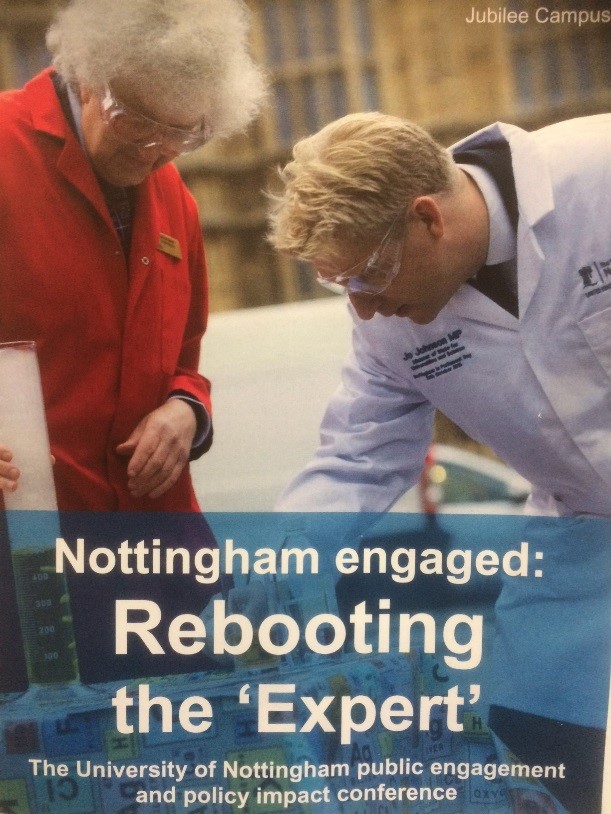 In a context where media visibility has become central to the way that universities engage publics and frame the public value of higher education, Periodic Table of Videos points to the way that content-promotion produced by academic researchers can serve and, importantly, circumvent the immediate needs of the “PR University.”