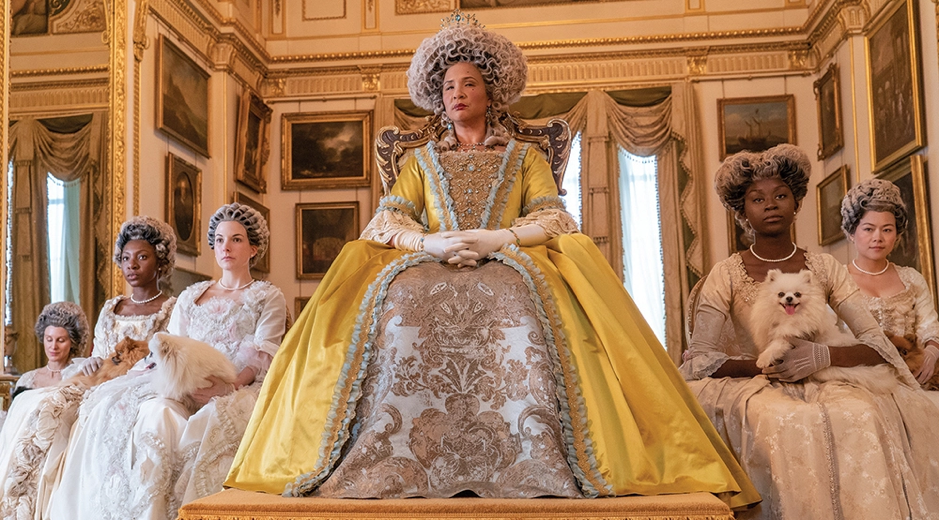 Like 193 million other viewers, I binged the gloriously extravagant second-season production of Shonda Rhimes’ Bridgerton (Netflix, 2022).[1] The series is an escapist space filled with normative multiracial romances, Black aristocrats, a mixed-race queen, and a bevy of ladies in waiting, valets, and footmen from a range of multicultural background (See Image 1).[2] Yet, as captivating as the Regency Era romantic drama is, it is also difficult to disentangle the production’s colorblind ethos from the racial nostalgia it reproduces and ultimately depends on to draw in its global audience.

Discussing his color-conscious pitch for the show, Chris Van Dusen writes in the Hollywood Reporter (2021), “It meant that the color of your skin would not determine whether you were high-born or low-born. It meant lords and ladies, dowagers and dukes, of all different colors and backgrounds, could exist in this world. This would not be a color-blind world. These characters of color that audiences would see and relate to onscreen were real.[3] Indeed the first season of the program developed characters and storylines more specific to the actors and characters’ racial identity. For instance, who could forget the cruel desperation of the romantic-lead’s father, a newly titled Black man, to produce a male-heir to maintain his family’s access to the white aristocracy.

However, in-spite-of Van Dusen’s claims, Bridgerton is anything but a color-conscious production. Both seasons of Bridgerton ultimately deploy multicultural casts and colorblind romantic narratives (See Image 2) to center the experiences of the white-lead and privilege white-heteronormativity. The characters of color always exist in relation to the main white characters or are deployed visually to add to the multiracial mise-en-scene of the show (See Image 1).[4] In doing so, Bridgerton exemplifies the post-racial era of TV production (2000-present) defined by multicultural ensembles, colorblind casting and storytelling, and the re-production of racial nostalgia through the erasure of racial conflict in the past and present.[5]

Like other streaming platforms, 57% of Netflix viewers in the United States identify as white, 22% identify as Latina/o, and 15% identify as Black.[6] Thus, streaming content producers must maintain its predominantly white viewership and attract an increasingly diverse set of subscribers. One strategy for doing so is to distribute programs that look diverse on the surface without explicitly engaging race or racial conflict, a strategy critical sociologist term racial nostalgia.

Nostalgia narratives, then, are imagined stories of the past that select positive elements from one’s personal history, while scrubbing away stories that are unpleasant and even shameful. Individuals compose nostalgia narratives when they feel their identities, status, and/or attachments to a place are threatened, and these narratives provide a means for constructing or framing identities that are positive.[7]

In order to re-imagine an 1810-1821 colorblind London scene filled with racially black and white aristocrats, Bridgerton’s producers intentionally represent racial difference without engaging those racial differences as central to the narrative and character development of its lead characters. 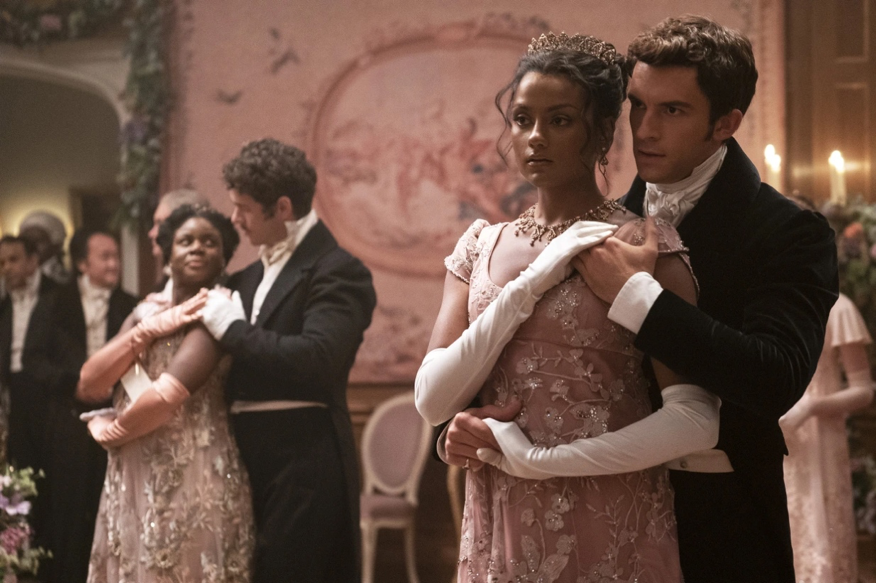 For example, in the image above, lead character Viscount Anthony Bridgerton’s (Jonathan Bailey) dances for the first time with Kathani (Kate) Sharma. An immigrant character from India from an un-titled family, Kate is performed by darker-skin complexioned Simone Ashley who identifies a British woman of Tamil descent. A multiracial couple dances next them, and deep in the background stands a Black footman, one of the most prestigious servant positions.

However, Sharma’s nationality and ethnicity and Ashley’s racial appearance are used only as colorful accents in the post-racial era narrative (See Image 4). Through the Sharma family audiences are introduced to a classical rendition of a popular Bollywood song, tea made with Indian spices, and other cultural rituals. And the costuming and jewelry for the Sharma characters fuse subtle Indian aesthetics into the producer’s modernized take on Regency Era fashion. 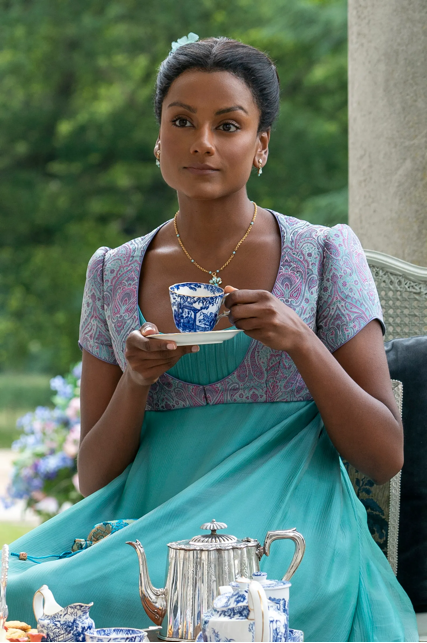 Image 4. Kate Sharma, whose character does not enjoy British tea, sips a cup made she made with Indian spices.

For Bridgerton to maintain Netflix’s predominantly racially white viewer base and potentially draw in Black and Latina audiences, it is imperative the narrative remain colorblind, free of ethnic or racial specificity.

Consequently, the producers’ center the storyline around the enemy-to-lovers trope. Instead of subtle nods to the romantic conflict the couple’s economic, ethnic racial differences would have caused, such as the color-conscious storyline of Something New (2006) starring Sanaa Lathan and Simone Baker, Bridgerton avoids the racial discrimination and harassment the lower-class, Indian women of the Sharma family would have encountered in Britain.[8]

The Regency period, which was a period of economic and cultural growth, was defined by British colonial expansion in India, Asia and the Americas, and the dominance of the British-Atlantic trade of enslaved Africans. Slavery would not be abolished in England for another 30 years.[9] And the wealth made from British imperialism and its trade of enslaved African people during this historical moment would propel England into the industrial revolution.

In pointing out the lack of historical context in Van Dusen’s production, I am not proposing that Bridgeton should be historically accurate or authentic. Nor am I suggesting that fictional entertainment programs should not play creatively with facts, history or the real. Afterall, what makes Bridgerton so compelling to audiences like me is that I can suspend my disbelief and imagine my Afro-Puerto Rican self in the text.

Rather, the trouble with Shondaland and Bridgerton’s colorblind romance with racial nostalgia is that it keeps white subjectivity and pleasure intact through eliding the lived and fictional racial trauma of the past and present. It makes it too easy to escape from the structures of inequality that call upon all of us to account.