Things That Shouldn’t Have Gay Energy But Do Anyways: CTI, Remixes and TikTok Duets
Luis Loya and Elaine Almeida / University of Wisconsin-Madison 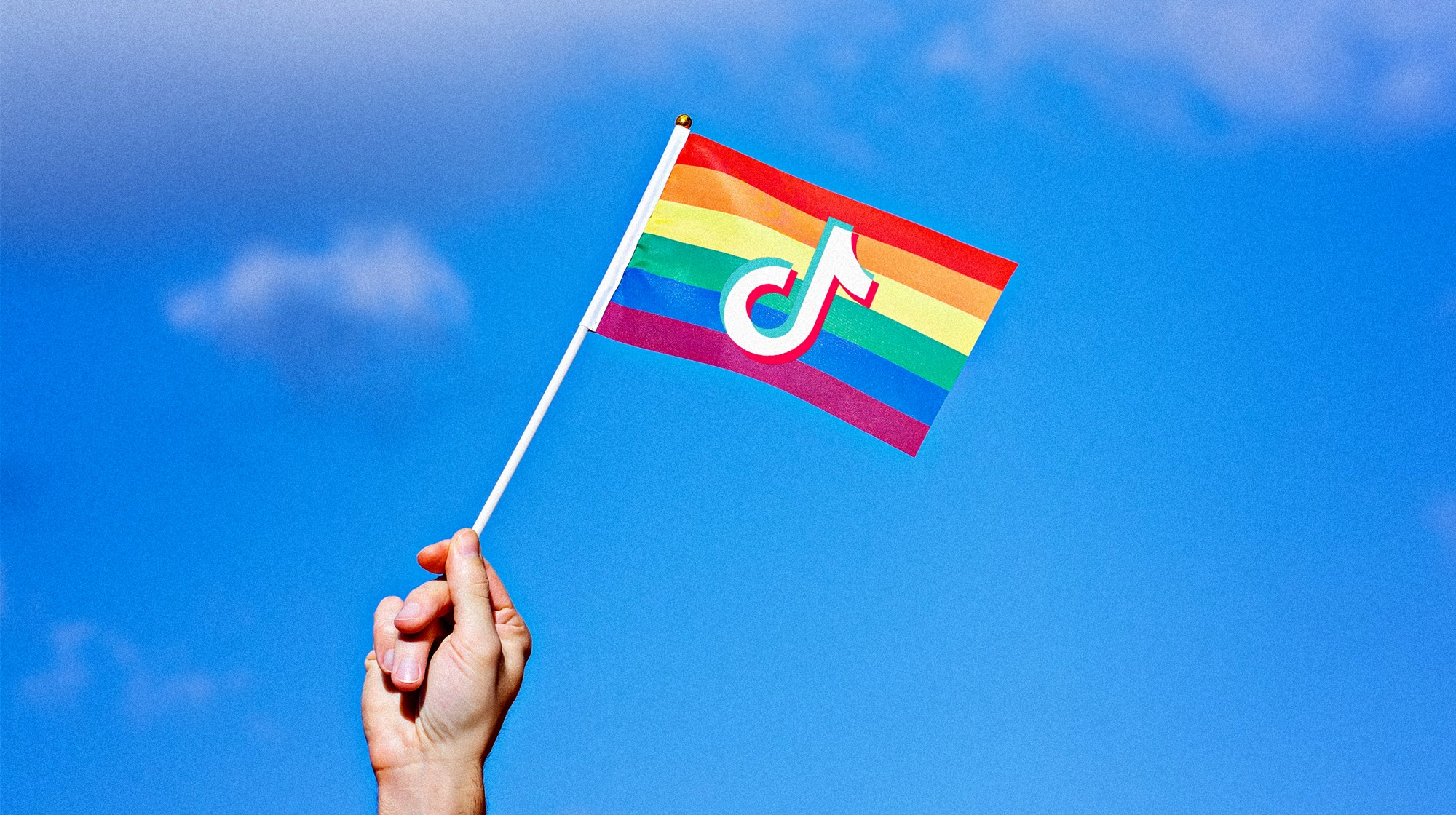 Loya and Almeida examine a “queer zeitgeist” on TikTok.

Despite the global dominance of social media companies like Facebook, Twitter, and Instagram, TikTok emerged as a highly successful video sharing platform. Here, we think about how TikTok content creation serves as an extension of queer community and identity formation, and what particularly makes TikTok a fruitful place for queer performance. We utilize Communication Theory of Identity (CTI) as our research lens to understand how TikTok hashtags and the duet/remix features connect the multiplicity of identities within queer life, such as bisexual, gay, lesbian, and transgender. CTI places communicative acts at the center of identity work, treating identity as an on-going and negotiated project, rather than an overarching structure (Hecht 1993; Hecht 2005) thus serving as a useful framework to address the various experiences of using TikTok as both a content creator and consumer. While other communities remix and duet videos, we hone in on the ways online queer communities are doing identity work by using this feature.

Tracing its lineage to earlier identity theories that situated identity as existing in the individual and society (Bush, 2016), CTI allows us to think through how an individual and their environment (be they physical or digital) interact through communicative acts to articulate identities, and sit with the reality that identity is dialectal and never finished (Hecht, 1993). With this view, CTI sees identity as composed of four frames (Hecht 1993, Nuru 2014): (1) identity as personal; (2), identity as enacted; (3) identity as relational; and (4) identity as communal. Personal identity is one’s self-concept and self-image, and in some articulations of CTI, one’s spirit (Golden, Niles, & Hecht, 2002); that is to say the most intimate and private parts of one’s identity. Enacted identity is the performance, expression or “acting” of one’s identity, that identity is emergent and that communication itself is a part of one’s identity. The relational identity consists of three levels: (1) how one sees themselves in relation to others and shapes social behavior to those around them; (2) the sense of self gained through relationships such as family, friends, co-workers or sexual partners and (3) the relationship itself is an identity, such as a member in a business or a particular family. Finally, the communal frame sees identity based on group/community affiliation and is held collectively by that group, working to unite the collective. These frames work in conversation to articulate the various manifestations and negotiations of identity, though frames may not always be in congruence. It is through these gaps but also through the merging of frames that CTI sees communication as the key tool in bolstering and living identity (Kam & Hecht, 2009).

TikTok closely resembles its video sharing predecessor Vine and the lip syncs and duets also resemble its prior conception known as Musical.ly. But below the surface and the default homepage lies a plethora of TikTok communities, many self-aware that they occupy an alternative space, as seen in the video above. Historically, queer and trans communities have found unique value in new and emerging technologies as a way to connect with others (Miles, 2018), educate about queer experiences (Fox & Ralston, 2016), and experiment with their identity (Cavalcante, 2019). Within TikTok we see queer content creators utilizing technology in ways similar to past research by educating viewers about international civil rights laws or by sharing how the voice changes when starting hormone replacement therapy. Unlike other social platforms though, TikTok is designed for this inherent queering that takes place. It calls us to think about this small paradigmatic subversion that queer creators undertake. While in some cases they use unique sounds to tell stories like duffel bags for trans women (video below), many queer them for community identity building.

The duet function allows creators to capitalize on a sound’s success to gain views while also providing opportunity for alternative interpretation. In duets, many creators echo the audio and visual, however in these self-proclaimed queer spaces content creators remix the visual into something outside heterosexual norms. For example, using the deep end freestyle sound, one user breaks from the norm and uses the sound to express his transman identity. Another user remixes a popular audio by Lil Mayo into a queer video by editing the word “homophobe” instead of “thots”. In duets, creators undertake identity work in their relational-enacted frames. The duet allows for the frames— in particular the relational subframe of how one sees themself in relation to others— to converse with the creator’s enacted goals and narrative, noting and playing off of the iterative nature of identity and the app. While the original TikTok video creates an identity narrative, the duet allows for the queer creator to negotiate their own identity into the video, queering the original video and their own. As creators, a queer enacted identity is able to contextualize the relationship not only between the creator and the sound, but the viewer and the queer digital space.

While as few as one identity is enacted in each video, creators still express their communal queer identity, working to unite the collective as Hecht suggests (1993). The communal frame acknowledges that held collective identities are not monolithic, but dialectically on-going in their formation. Diary videos like being trans at Disney World show a theme of anxiety and hiding as well as a tension of wanting to live true to one’s identity while wanting to hide because of potential discrimination. This video, while it speaks the creator’s enacted identity, alludes to the commonly held experiences many trans and gender non-conforming folks face, thus uniting folks who are typically alienated by geography. This identity work takes place for both the creator, who operates on an enacted-communal level, and the viewer, who is able to partake in identity formation through the personal-communal frames. Other trends take a more humorous approach like describing things that aren’t gay but “radiate gay energy”. For example, this video includes Volvos and rosy maple moths while another clip, seen below, includes the Jewish faith and the unsolved murder of JonBenét Ramsey. TikTok’s queer community is fundamentally different from previous platforms, with its emphasis not only on traditional identity expression online but an embrace of absurd and nonsensical humor.

In addition to identity expression, the duet feature allows queer creators to subvert non-queer sounds and Western knowledge. In this video, the creator subverts a dancing audio and traditional Western queer history. Here, the creator shows that despite gay marriage being recently legalized in North America, indigenous tribes have been practicing this for thousands of years. That CTI reads identity as iterative renders this continuing queer negotiation of both communal and personal frames—how we identity with others and how we deeply see ourselves— in heterospaces as a dialectical and recursive strategy for claiming queerness.

TikTok creators also share common experiences through remixing sounds that originate in a queer space, thus bolstering queer created content. For example, this sound originated with a user storytelling how their father wants them to act straight when friends are around. This sound is then re-used to express queer identity, but in a different way, like this video about sapphic attraction. Whereas queer identity work in heterospaces serves as a reclaiming of space for historically marginalized folks, the compounding and intensifying of queer spaces allows for the continuation of queer digital community building and works to tear down monolithic iterations of queerness in the zeitgeist. This works to create dynamic, complex identities for queer folks beyond one-dimensional queer identity manifestations. Again, queer folks continue to do the work of pushing the boundaries of queerness, utilizing TikTok’s platform and original “alt-mainstream” virality to form community and self.

Overall, the queer community on TikTok capitalized on the duet and hashtag affordances to mirror prior patterns of community expression online while demonstrating new ways to subvert the dominate culture. Through the process of remixing sounds, queer users affirm their own identity, teach others about their identity, and collectively construct a network of pop culture and symbols toward a “queer zeitgeist”. Identity is ongoing, with communication sitting at the heart of the work along with who we are communicating to. TikTok works to bolster each form of identity through the performances, duets and comments function, but more importantly, the queer zeitgeist is manifested through the relational-enacted frames and communal-enacted frames, which call us to situate their identities, and our own as viewers, in a queer paradigm. This study was done both before and during a global pandemic of COVID-19, a time when many people are stuck at home, face limited social interactions, and use technology even more. This context elevates TikTok’s importance as a platform for queer community and replacement for social life. Unlike other queer media spaces like television or Twitter though, the community on TikTok is made of many individuals without celebrity status and users have significantly less of a following, a characteristic of the early stages of social media like YouTube that showcased videos from everyday users.