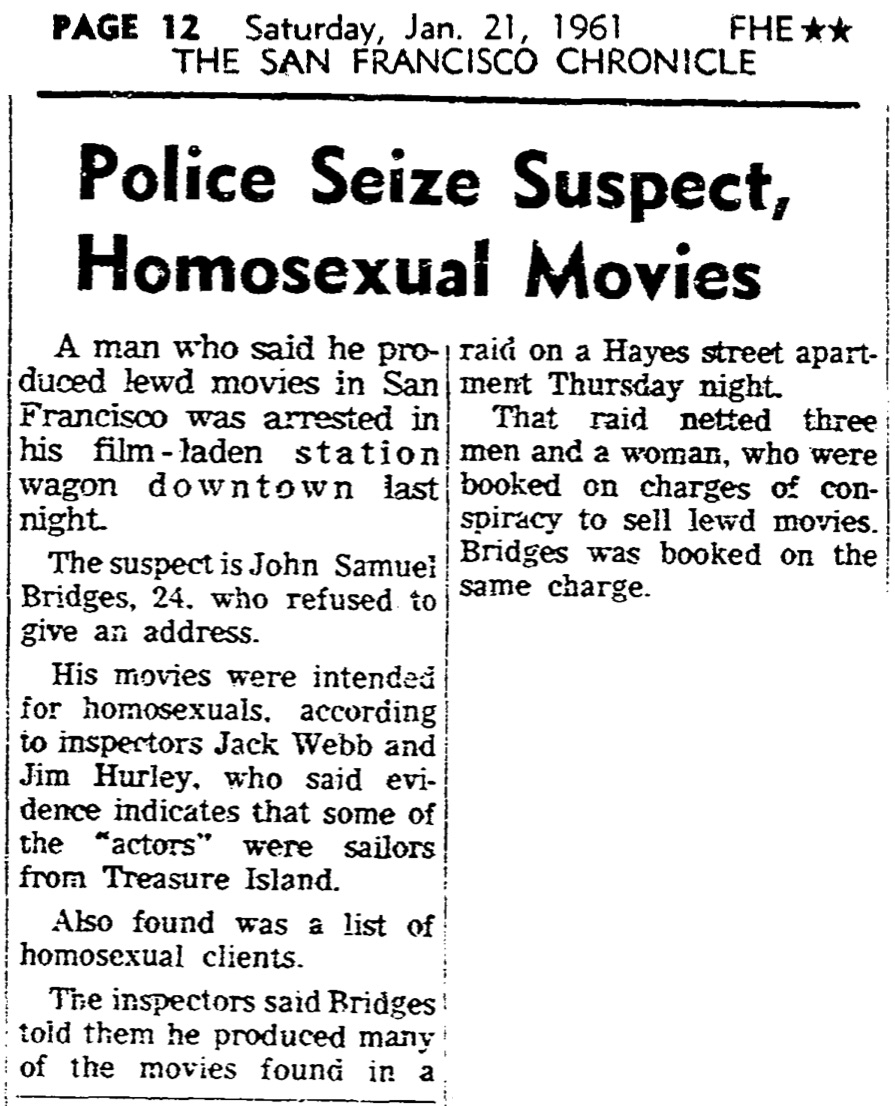 In June 2017, as I was researching the history of Californian gay media industries I came across a curious article in a January 1961 issue of the San Francisco Chronicle. Entitled “Police Seize Suspect, Homosexual Movies,” the article detailed the arrest of an individual named John Samuel Bridges whose station wagon was loaded with films apparently intended for distribution to gay male consumers.[1] The report noted there was evidence that sailors stationed at Treasure Island appeared in the films, a fascinating historical revelation given the island’s important place in San Francisco’s LGBTQ+ history. The Golden Gate International Exposition on Treasure Island featured popular amusements on its so-called “Gayway” that pushed the envelope on sexual propriety in the postwar era.[2] Treasure Island was also the location of a notorious military brig where gay men of the navy were incarcerated and abused before being discharged.[3] According to the Chronicle article, Bridges was involved with both the making and distribution of these movies, and officers allegedly recovered a list of potential gay customers. 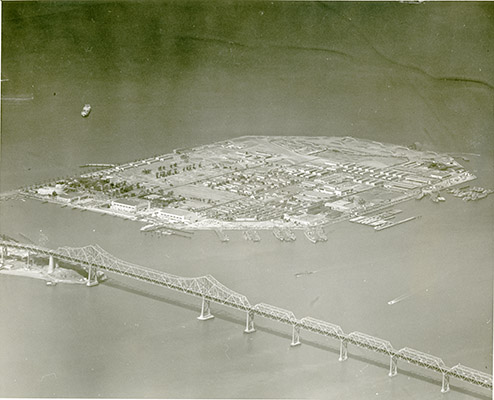 This incident is notable for a number of reasons. Gay nontheatrical distribution is generally an under-researched field that could uniquely contribute to ongoing debates in nontheatrical film history.[4] The date, 1961, precedes the famed advent of West Coast gay theater policies, namely the operations of the Haight in San Francisco starting in 1964 and the Park in Los Angeles commencing in 1968. Given the date and description, Bridges’ movies would have been either physique posing films or hardcore stag films, reproduced on small-gauge and distributed to nontheatrical gay consumers. As Elena Gorfinkel has detailed of the larger industry, small-gauge nontheatrical producers and distributors were industrially at odds with the 35mm theatrical adult film industry, who attempted to distance their work from small-gauge workers and also bar such workers from entry into the adult film trade organization.[5] Thomas Waugh estimates that in comparison to the massive gay photography industry, the much smaller international market for gay nontheatrical film “allowed at most a dozen producers in 1960.”[6] This estimate—and the allegation that Bridges’ car was packed with gay films—potentially places Bridges among the ranks of Bob Mizer and Dick Fontaine, the most prolific gay film producer-distributors in the state (and perhaps the country) before 1968. Furthermore, histories of the production and distribution of nontheatrical (and theatrical) gay films in San Francisco often begin with discussions of J. Brian or Hal Call, but include little information on the period before 1967.[7] Finally, given the difficulty of recovering distribution history due to gay nontheatrical films’ clandestine circulation, records produced by an in-transit arrest could include significant revelations.

For these reasons, I was fascinated to know more about this incident. Searches through available historical newspaper digital archives turned up no other results on either Bridges or the outcome of his arrest. Because of this scarcity of information, I decided to file a public records request with the San Francisco Police Department (SFPD) to see if a police report or other ephemera pertaining to this incident might still exist. California Government Code §6254 (f) (1) provides that under certain circumstances law enforcement bodies must make public:

On October 9, 2018, I submitted a request to the SFPD for all the above listed information relating to John Samuel Bridges’ arrest on January 20, 1961.

On October 10, I received a response from SFPD asserting that the information I requested would not be disclosed because it was criminal history information protected from public disclosure under Penal Code §11105.[9] I found that response confusing because an almost identical request to the Los Angeles Police Department for 1970s records received a response that did not refuse record disclosure, stating that “in order for Records and Identification to even try to search for arrest reports that old, they need the booking numbers.”[10] Because of this discrepancy, I decided to look further into the SFPD’s reasoning for refusing to disclose records in the case of Bridges.

After reading the Penal Code section cited by SFPD, I believed the information I saught may have been misunderstood as “criminal history information,” a specific phrase in the Penal Code §11105 defined as a compilation of data from an individual’s overall criminal record.[11] Because of this possible misunderstanding, I submitted a second request on October 12 specifying that I did not want a compilation of criminal history on Bridges, but only arrest information on the June 20, 1961 incident. The second request for disclosure was denied by SFPD on October 18, with a different rationale. This time the response stated that due to an appellate court decision in 1993, the California Public Records Act “only requires the Department to provide information relating to current or ‘contemporaneous’ police activity.”[12] Confused by this second unsuccessful public records request that cited a 25-year-old case, I searched and found a later 2015 appellate court decision that appeared to contradict the “current” argument in the 1993 case cited by the SFPD. The 2015 decision I found stated, “Section 6254, subdivision (f)(2) must be read according to its plain terms, and these terms do not include an express time limitation on production of only ‘contemporaneous’ or ‘current’ records.”[13]

With this finding, on November 2, 2018, I submitted a petition for review of my two public records requests to the Supervisor of Records at the San Francisco Office of the City Attorney.[14] In my petition I cited the 2015 decision, included copies of my original requests, and attached the SFPD responses. On December 3, 2018, I received a response from the Supervisor of Records that provided an interpretation and detailed legislative history of the “contemporaneous” and “current” §6254 language in the Fredericks and Kusar decisions.[15] In the response, the Supervisor of Records ultimately affirmed the SFPD’s refusal to disclose records on Bridges.

This process proved to be a learning experience, but it also speaks to the larger subject of the viability of accessing public records for historical research. At present, completing historical research using federal public records requests (via the Freedom of Information Act) can be feasible. However, my experiences attest to a current lack of feasibility in using California Public Records Act requests to research historical arrests by city police departments in Los Angeles and San Francisco. 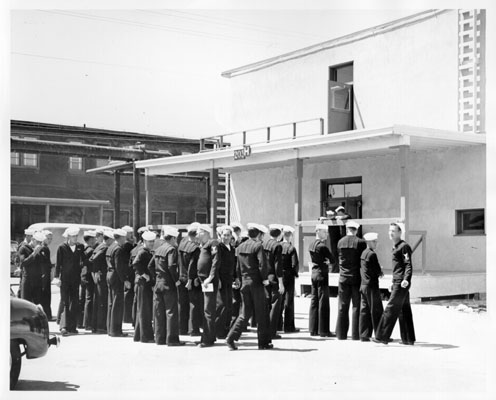 In the year following my unsuccessful public records requests, I’ve uncovered additional information that reveals a larger picture of John Bridges’ business operations. Beyond transporting nontheatrical gay movies, the original article noted that Bridges produced several other adult films confiscated the previous day from small-gauge entrepreneurs. The entrepreneurs apparently had some business connection with Bridges, but had previously founded a studio for “legitimate” nontheatrical endeavors (one individual later explicitly identified himself as an “educational film maker”).[16] However, when the studio went bankrupt they transitioned to the production of nontheatrical adult films. I am hopeful that pursuing further leads will result in developments on this unique case of clandestine gay-oriented nontheatrical distribution. Distribution remains a crucial yet exceptionally difficult sector to investigate, but media industry studies scholars continue to propose and apply creative approaches to researching distribution that emphasize critical, archival, and interview-based methods.[17]