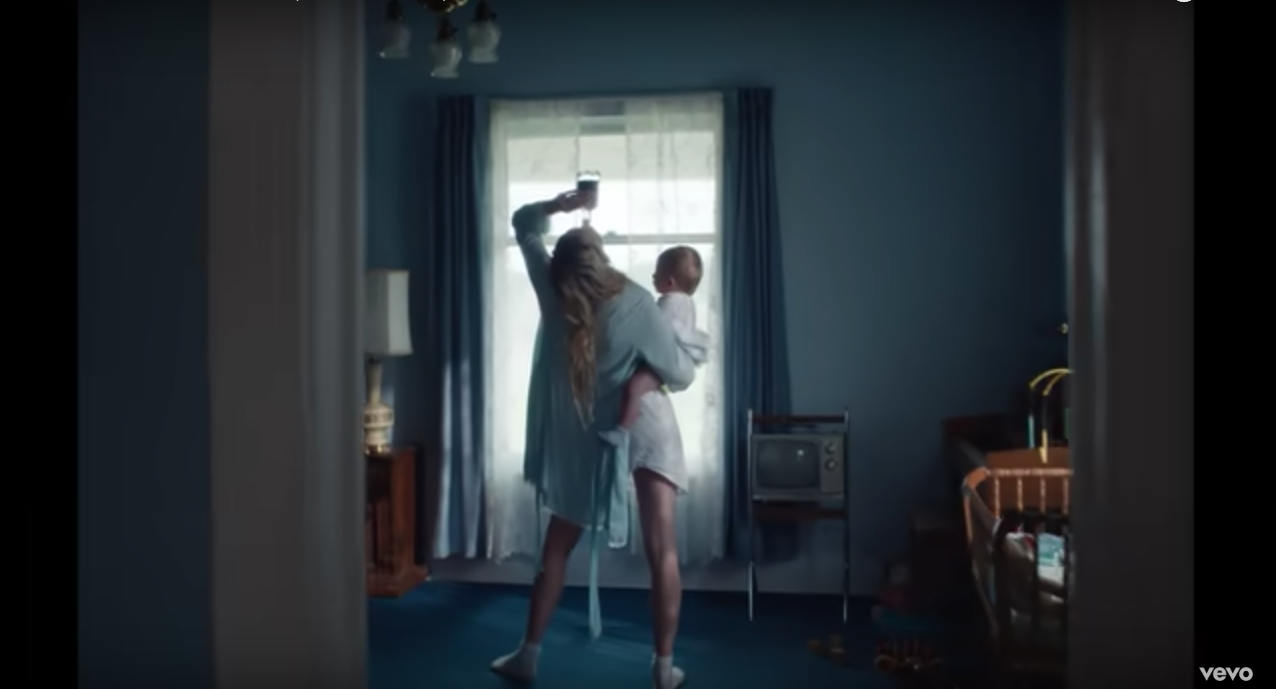 On September 8, 2019, The Lumineers’ III[1] premiered at the Toronto International Film Festival. Directed by Kevin Phillips, the film is comprised of ten music videos—one for each track on the album—and like the album, it tells the dark, multi-generational tale of a family destroyed by addiction. As such, we might call III a visual album, though each of the videos has also been released online in a standalone capacity.[2] One of the lead videos released on YouTube, “Gloria” is especially grim. It introduces us to alcoholic mother Gloria Sparks, who loves her baby but wreaks havoc on her family. The sad, elliptical story in this installment of III culminates in a horrible car crash with uncertain repercussions. “Gloria” features the type of loosely sketched, socially conscious narrative that is on trend in current music videos but is by no means new.[3] A far cry from the glitz and glam of some pop videos, “Gloria” is both moving and serious (as signaled by a plug for Alcoholics Anonymous in the credits below the video). This kind of seriousness (not to mention film festival premieres) sometimes earns music videos a “cinematic” label, but I would argue that “Gloria” is still a music video at heart, and that its music video qualities are as compelling as its narrative.

What are these qualities, though? Defining music video has proven an elusive task. Recent scholars have often dodged the question, settling on something like Steven Shaviro’s “I know it when I see it.”[4] Carol Vernallis suggests that the radical expansion of music videos, now no longer tethered to MTV or televisual limitations, means that we can no longer rely on the definition we once had, which was something like “a product of the record company in which images are put to a recorded pop song in order to sell the song.”[5] This definition certainly feels dated to us now, but its emphasis on commerce was always too limiting. Think of Bruce Conner’s experimental films inspired by Ray Charles and Devo,[6] or Kenneth Anger’s Kustom Kar Kommandos. Can’t we recognize something music video-esque in these non-commercial (or anti-commercial) works? Perhaps we don’t need a definition that delimits music video according to promotional function, medium (film, video, digital), or means of exhibition. Rather than policing the boundaries, can we ask what’s quintessential to this form?

If it’s true that we know a music video when we see it (and, importantly, hear it), how do we recognize it? When I ask students in my music video seminars this question, they usually begin by articulating a relationship between music and moving images, and ultimately clarify that music must drive the images in order for us to call this relationship music video.[7] This doesn’t mean that the images are merely supplemental, though, students point out. Nor does it foreclose the possibility of dialogue, sound effects, silence, or other music.

Giulia Gabrielli suggests that one of the constitutive ways that music and images “get in touch with each other” in music videos is through “synchronization points,” a term she draws from Michel Chion’s extensive work on audiovisual relations.[8] Synch points provide consonance between musical and visual qualities. They can arise when editing, camera movement, or on screen movement matches a rhythm, or when a lyric is visualized, to give just a couple examples. Gabrielli valorizes the kind of tight synchronization we find in Michel Gondry’s video for Daft Punk’s “Around the World,” where each of five character types is tightly choreographed to match one musical “voice” (bass, guitar, drums, synthesizers, or vocoder).

This emphasis on audiovisual synchronization is not new, of course. It features regularly in the long history of artworks loosely labeled visual music. Purists will tell you that visual music is not a sound art—rather, it is visual art that draws upon musical structures, feelings, or languages.[9] But visual music artists as diverse as Oskar Fischinger and John Whitney have paired their visual compositions with music to form compositions that we might recognize as music videos. There is clear continuity between this work and more recent music videos such as Shugo Tokumaru’s “Katachi,” Half•alive’s “still feel,” and Gnarls Barkley’s “Crazy.” These videos, like their visual music predecessors, translate musical qualities into colors, shapes, and movements.

If the tradition of visual music opens various avenues of audio-to-visual translation, though, it also raises questions about how tightly image should be synchronized to music. Fischinger told fellow filmmaker Hans Richter, who was critical of his work, “I never tried to translate sound into visual expressions.”[10] Rather, Fischinger saw the kind of tight synchronization implied by translation as just one of many resources available to visual music artists. Using the metaphor of a river as the music and a person strolling along that river as the images, he suggests that “The film is in some parts perfectly synchronized with the music, but in other parts it runs free … sometimes we even go a little bit away from the river and later come back to it and love it so much more—because we were away from it.”[11] Audiovisual synchronization in music videos often works this way.

Not all music videos strike this balance, though. Carol Vernallis proposes that in music videos, music and image function like a couple who must constantly negotiate each other’s needs. “We can assume,” she says, “there are issues of dominance and subservience, passivity and aggression.”[12] The same might be said of the artistic and industrial forces at play in the making of music videos. What happens, for instance, when a musician’s vision and a director’s vision are not in synch? Can music and image still “get in touch”? In my next column, I’ll turn to the question of how music videos work.