With the proliferation of “how to” videos on YouTube, the make-up tutorial has sprung up as one of the most popular—and profitable—video forms. These videos provide detailed real-time instruction about how to create make-up looks that invite viewers to learn new skills via imitation. The mode of recording utilized by makeup tutorials creates an intimacy of space that is fostered not only by the intimacy of YouTube, but also by entering the domestic spaces of vloggers and sharing in the private act of putting on make-up. This exposure of private space via the digital serves as a exposé of the imperfect spaces of the domestic—both bodily and spatial—that is in contrast to the cultivated spaces of public perfection trafficked in places like Pinterest or on blogs like GOOP. In the tutorials, the exposé of labor on display serves to produce an expectation of labor by making perfection accessible to all by teaching viewers how to mask failure through makeup.

One of the central elements of YouTube’s online culture is the video blog or vlog. Of vlogs, Jean Burgess and Joshua Green have stated, “Not only is the vlog technically easy to produce, generally requiring little more than a webcam and basic editing skills, it is a form whose persistent direct address to the viewer inherently invites feedback.” [1] This webcam—or increasingly mobile phone or digital camera—based mode of recording is inherently well suited for makeup tutorials as the frame provides a reflection akin to that of the mirror, creating a sort of screen mirror that allows viewers at home to easily follow along by setting their laptops or phones on their own vanities to mirror in their own mirrors what they see onscreen. The makeup tutorials invite viewers to learn new skills via imitation and privilege the peer-to-peer sharing that is a hallmark of the new media moment, where expertise has shifted from professional experts to amateurs.

Makeup tutorials are typically longer than the average YouTube video unfolding in about 10 minutes or the real time it takes to complete a look on the assumption that viewers will be working along with the vlogger; pausing when more time is needed or playing back when they don’t catch something the first time. The structure of the videos also teaches viewers the appropriate order to apply make-up (base, eyes, cheeks, lip) and this consistency of structure allows for easy moving about the video for viewers who only want one part of the look. These videos cover a multitude of topics from how to perfect a smoky eye to how to solve “problems” such as acne or dark circles. Tutorial topics are often motivated by community feedback with viewers requesting tutorials from vloggers using the feedback functions that are built into YouTube, creating the intimacy that Burgess and Green point to. In the case of these videos, the intimacy is not only fostered by the intimacy of YouTube, but also the intimacy of the actions in question: entering the private space of the vloggers and sharing in the private act of putting on make-up. As Sam Chapman of vlog duo PixiWoo has stated, viewers “see the imperfections disappear as you go through the video.” [2] This act of watching the imperfections disappear in seemingly real time is arguably one of the main pleasures of makeup tutorials. Rather then relishing in the shock and awe transformations of the before and after, as is characteristic of makeover television or stars without makeup features in tabloids and on gossip blogs, makeup tutorial videos use the act of transformation as their currency thus performing the hidden labor that produces aspirational beauty. In fact, with their long runtimes, they almost diminish the importance of the reveal, relishing instead the labor of transformation itself. It is this labor that becomes the spectacle. 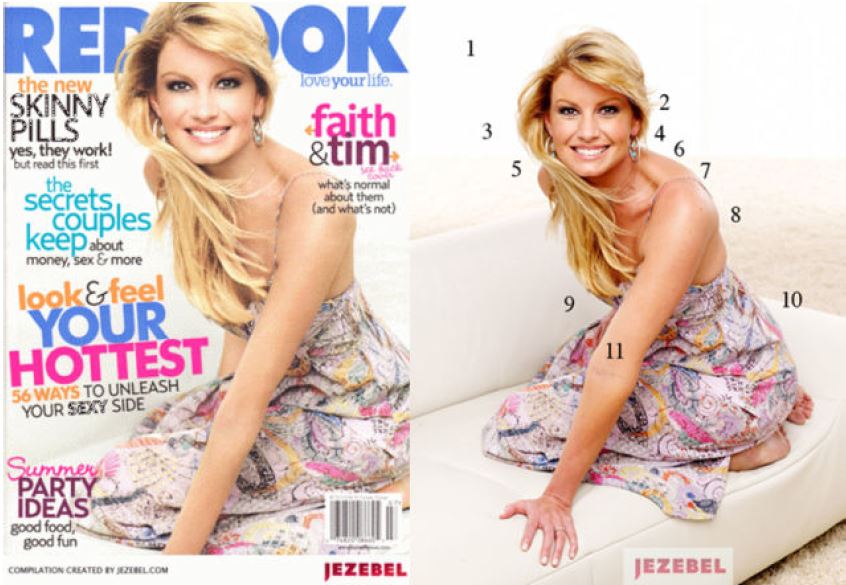 Showcasing this hidden labor is not designed to be part of a feminist project of resistance as we see with things like “Photoshop of Horrors” on Jezebel, where the exposé of labor is designed to show the impossibility or the fallacy of the image on display as an act of resisting, but rather these videos show the hidden labor as inspirational. As if once you know how to do it, you have no more excuses for why you can’t. This is especially true for women who have historically been left out or been marginalized by the editorial content of mainstream beauty magazines. Vloggers come in all races, shapes, and sizes to instruct the masses of women about how to create the perfect cat eye regardless of your eye shape or complexion. Vlogging culture creates a kind of uber customization of the beauty industry, but this seeming diversity belies the truth that most of these videos are ultimately asking women to aspire to the same feminine beauty standards. As scholar Elizabeth Nathanson has noted, “By demonstrating how to create a range of makeup looks, they perform their expertise for the masses, promising to democratize glamour and style by teaching others, while simultaneously establishing strict standards for appropriate femininity.” [4] The makeup tutorials show off the imperfections and note them as a feminine norm, but enunciate that imperfection is not an excuse for not adhering to the beauty standards of postfeminist consumer culture.

In their showcasing of the labor of beauty, these videos also serve a secondary purpose of showcasing the intimate spaces of domesticity. The videos are primarily set in the spaces where women put on makeup, namely bedrooms and bathrooms. These are not the powder rooms or living rooms that represent the public spaces of houses, but rather the private spaces that only intimates are typically granted access to. I would argue that one of the great pleasures of YouTube is the access it grants you to these spaces that become more and more off limits to adults. The settings of these videos then reflect the real-life domestic spaces of their makers. These are not the hyper-stylized spaces of lifestyle blogs and Pinterest inspiration boards, but rather real lived spaces with their own imperfections about them. Makeup tutorials relish the imperfection of the postfeminist experience—so you dropped some makeup on the white duvet, no problem; you messed up your eyeshadow, then take it off, rewind, and try again. These images are notably not edited out or re-shot by the makers, but rather left in to show off the imperfection inherent to both the labor of transformation and the labor of making.