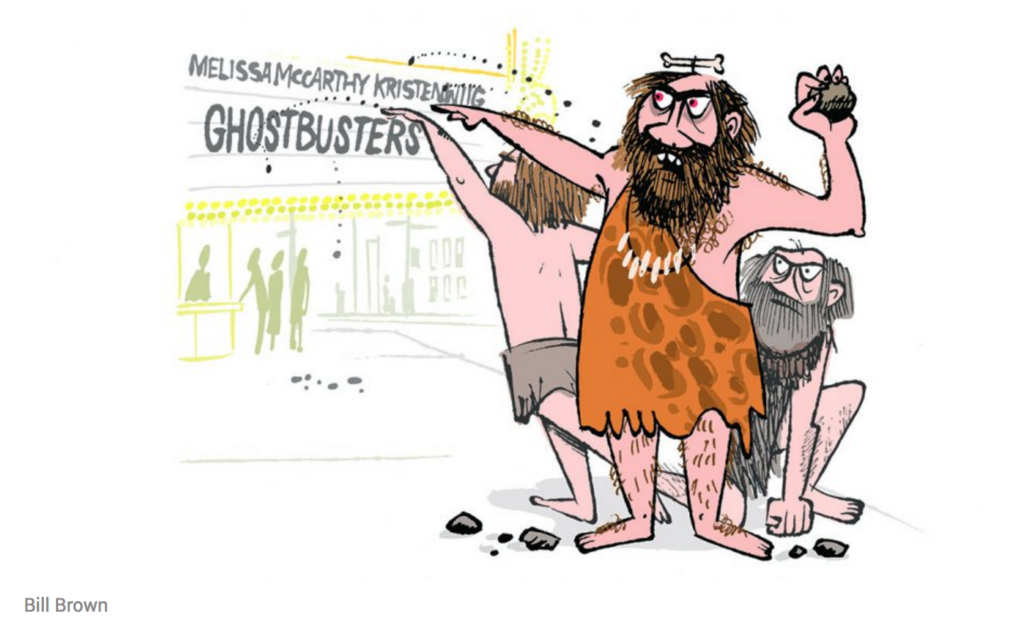 Actual depiction of men who don’t think women are funny.
“This film never was meant to be political. But, ridiculously, it became just that.” – Paul Feig1

From the time that Paul Feig announced he was rebooting Ghostbusters in 2014, the online backlash was almost immediate and the project was under constant scrutiny. At first, gender-swapping the four male characters with female characters was the main criticism. That one change was enough to send hardcore fans of the original films into a tailspin and their accusations covered the project (and the Internet) in a sticky coat of misogynistic, nerd boy nostalgia. As the project progressed, however, it received additional (and legitimate) criticism about casting the three Caucasian actresses as scientists and the one African American actress as a New York City subway worker. Then the movie opened and some of the critiques shifted to the queef joke early in the film.

In the scene, an oddball scientist played by Kate McKinnon (Saturday Night Live’s first openly lesbian cast member), plays audio of supernatural sounds for a colleague and a fart noise is on the recording. 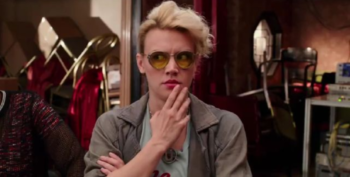 After playing the noise, she asks, “is it more or less disgusting if I tell you it came from the front?” The joke is absurd but not insignificant. It’s also one of the various factors that (despite Feig’s disbelief) makes the film political.

All human bodies make noise, but it is socially acceptable for some human bodies to make more noise than others. For example, fart jokes have a long and varied history in entertainment and popular culture. In “The History of the Fart Joke,” Gogo Lidz charts the progression of fart jokes from Aristophanes, Shakespeare, Ben Franklin, and Mark Twain, to Blazing Saddles, Monty Python, Austin Powers, and Anchorman [2]. Farts, of course, are universal and occur in both men and women but in pop culture, it’s usually men who get to make the most noise. However, anyone who thinks fart jokes are funny should think queef jokes are funny too, because it’s a similar sound; it just comes from a slightly different location. Yet that isn’t always the case. Unlike fart jokes, queef jokes have a less prominent place in popular culture.

All-male comedies written by male writers with jokes unique to the male experience (see: dick jokes, “blue ball” jokes, early morning erection jokes, erections-at-the-wrong-time jokes, caught-in-a-zipper jokes, etc.) are far more common than all-female comedies written with female writers that include jokes unique to the female experience (aside from childbirth). [3] This may be one reason Katie Dippold, one of the head screenwriters on Ghostbusters, had to fight to keep the joke in the script. According to Dippold, “It’s not like I thought that one day I would be fighting for a queef joke, but it was a big debate… Fart jokes have been in movies for years. If the only thing offensive about this is that it comes from the vagina, I’m like, ‘That’s on you!’”[4]

Silence and noise, when strategically deployed, are both political; they represent a refusal to accept social norms and may be used as a form of protest. According to Mary Chapman, author of Making Noise, Making News: Suffrage Print Culture and U.S. Modernism, “early twentieth-century suffragists’ radical deployment of noise as a mode of political self-expression was in many ways a reaction both to these proscriptions against women’s public utterance in nineteenth-century America and to the opportunities presented by the changing context of the modern public sphere.” [5] It is, of course, an overreach to compare a woman’s right to queef with a woman’s right to vote, but they are, in fact, related.

Body politics (the practices, policies, and social control of the body) are politics, so it matters which actors’ bodies get to make noise and which don’t — and which bodies are cast in which roles. Therefore, does the queef joke “save” the film as a feminist film? No. Of course not. The film itself is mediocre and the casting criticisms are valid. Sure, casting Melissa McCarthy as one of the lead characters makes economic sense. Out of the other three actresses, she is the biggest box office star. Based on her success with Spy (2015), it made sense to give her top billing. Hollywood films are risky and expensive to make so to offset that risk, they chose an actress who has a strong fan base and a proven track record to lead an ensemble cast. However, Leslie Jones could have easily played either of the other scientists instead of being relegated to the subway worker. So, in that regard, while the film might destabilize gender stereotypes, it simultaneously reinforces racial stereotypes. As a result, the Ghostbusters queef joke is only a small victory. Sure, it reinforces women’s right to make noise (from whatever hole they please), to be noisy, to refuse to shut up and conform and stay silent — but feminism gains little if it’s at the expense of other groups.

Therefore, a related question is not only who gets cast in which roles but, who is allowed to make noise in those roles and who is not? Which bodies? And specifically, what kind of noise and from where? As in, which body “gets” to queef on film and how will it be received? As Leigh Cuen points out, “In the few instances of films openly referencing queefing, the jokes are usually made at women’s expense. Take, for instance, a queef joke in the Ben Stiller movie The Heartbreak Kid, in which the vaginal puff is meant to show how unromantic married life can be.” [6] The distinction between the Ghostbusters joke and The Heartbreak Kid joke, as Cuen points out, lies between laughing with women rather than laughing at them. So perhaps in 2016, quirky McKinnon is the safest choice for this joke. Would critics of the film have disapproved of the queef joke coming from Jones as the only African American woman in the cast? Or McCarthy because she’s “plus-sized?” Would it have been perceived as a way to de-sexualize them in comparison to their peers? From which body is a queef joke the funniest? The raunchiest? The most grotesque? Which bodies are audiences more likely to laugh with — rather than laugh at? In her book, The Unruly Woman: Gender and the Genres of Laughter, Kathlee Rowe “investigates the power of female grotesques and female laughter to challenge the social and symbolic systems that would keep women in their place. More often, the conventions of both popular culture and high art represent women as objects rather than subjects of laughter.”[7] In Ghostbusters, McKinnon is in on the joke. She delivers the punch line and is the subject of the laughter — not the object. In this way, the queef joke may function as a social barometer — indicating how far we’ve come as a society in laughing with women rather than at them and accepting a (slender, blonde, white, lesbian) woman’s right to make noise.

However, true progress in the history of queef jokes will come when more diverse bodies (fat, brown, queer, trans, disabled, etc.) are allowed to make this kind of noise in mainstream Hollywood films — and be the subject, not the object, of the joke.