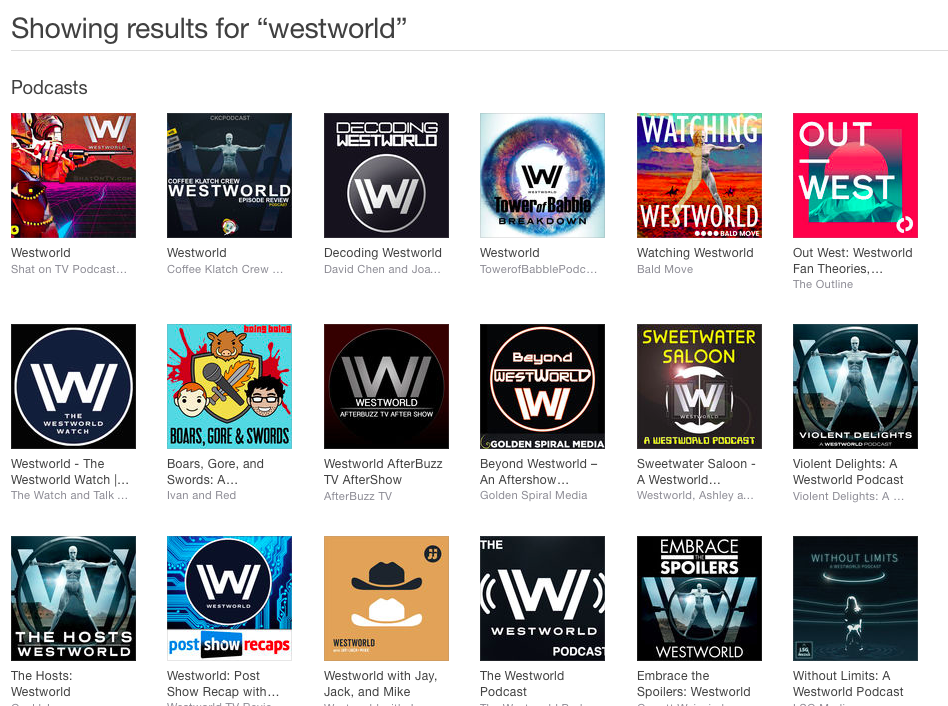 A selection of podcasts discussingWestworld

While a ratings and critical success, Westworld is perhaps most obviously a “hit” for HBO due to the sheer volume of “content” the series has generated. This includes a deluge of reviews and interviews from trade and enthusiast press outlets on Sunday nights when episodes finish airing, along with over forty podcasts (pictured above) devoted to analyzing each episode of the series. And while this type of coverage and analysis is common for “hit” television series like The Walking Dead or Game Of Thrones, both of those series were built around existing media franchises instead of a mostly-forgotten film from over forty years ago, making this a primarily self-starting phenomenon. At some point within the show’s first few weeks, Westworld became the type of series that floods social media with theories and reports about those theories and videos about those theories, and my question is this: Why?

Is Westworld designed as a giant puzzle? Did HBO use trailers or other promotional materials to frame it in these terms? Or is this a case where audience demand for specific forms of Westworld content is encouraging reporters to supply that content? Puzzling over the puzzling over of Westworld is not about finding a definitive answer to this question (the answer is some combination of the above), nor is it about trying to suggest there is one singular, correct way to read the series. Rather, it’s about thinking through how Westworld exemplifies shifts in how television is covered, reshaping the web of television, its audience, and the journalistic engines that serve as an intermediary. 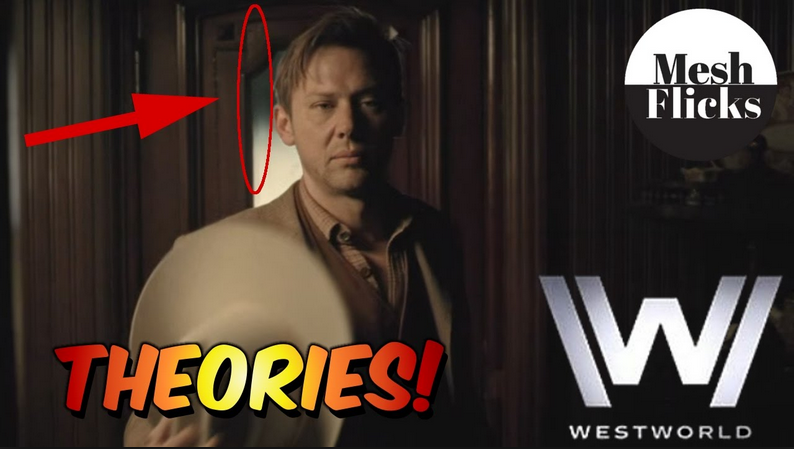 This screenshot comes from “Westworld | Theories! Different planet? Simulation?,” by YouTube user Mesh Flicks. As of November 2016, it has garnered over 42,000 views.

John Fiske argues in 1987’s Television Culture that there are three primary layers of television textuality. [1] The first, the primary text, is the series itself. The second, the secondary text, is what’s written about that series in magazines and newspapers, or through formal publicity. The third, the tertiary text, is how viewers respond to the series, whether in personal conversations or in letters to their local critic or favorite fan magazine.

There has always been a relationship between secondary and tertiary textuality: writing about polls creating a sense of community in fan magazines, Fiske argues that “these magazines do not create this activity, but they know it is there, encourage it, and give it a public status…in order to enhance the pleasures of the active viewer.” [2] While textuality becomes more complicated in an online environment, we can see how critics and reporters embraced the emergence of forms of what Jason Mittell refers to as “forensic fandom” around shows like Lost, with writers like Entertainment Weekly’s Jeff Jensen emerging as key theorists in that show’s fan community. Critics writing episodic reviews also created spaces where fans could congregate and speculate, with a focus on activating—and monetizing—those communities within online environments.

However, in the context of social media proliferation, this relationship has shifted. Rather than generating content to create spaces for community, the outlets generating hundreds of articles about Westworld each week are attempting to tap into the existing communities on Reddit or Twitter or Tumblr. Content is created for an internet governed by logics of spreadability, and increased concerned over search engine optimization as ad blockers and shrinking ad revenue threaten online journalism writ large. [3] They are also created in an environment where tertiary texts are increasingly shared as secondary texts, with formal reviews shared on Twitter alongside elaborate Reddit posts or detailed Tumblr theories, creating intense competition and blurring the lines between the two categories. If online users once looked to spaces like Entertainment Weekly or isolated message boards/wikis in order for their active viewership to be encouraged, social media has made such encouragement readily available, and reshaped the interplay between these agents of textuality.

The result is that Fiske’s notion that authors of secondary texts “don’t create this activity” has grown out-of-date. In the case of Westworld, the dictates of press coverage of the show were determined in advance of the show’s premiere: when it debuted on October 2nd, Vulture’s immediate coverage included both a traditional recap alongside “Our Biggest Questions After Westworld, Episode One.” Heavy.com published a slideshow—the peak of online journalism monetization—that structured their “recap” of the episode around “Top Theories and Explanations.” [4] Such coverage is based on these writers’ reading of the text, but the framing is also predicting and hoping to shape audience reaction—by the next morning, outlets like The Huffington Post were mixing their own theories with aggregated content from Reddit, and by the end of the week sites like Slashfilm were collecting theories that were in part generated by fans, but also included posts from sites like Hitfix.

These early secondary texts did not generate a theory-driven conversation around Westworld out of thin air, but Google Trends shows that the specific idea of “Westworld theories” was not something that predated the show’s premiere, garnering little-to-no search activity in the weeks leading up to its debut. This discourse’s presence in pre-written coverage represents an effort by websites to turn Westworld into another consistent traffic-generating series in the vein of Game of Thrones or The Walking Dead. Treating the show as a puzzle justifies not only weekly reviews and interviews when episodes air on Sunday, but also updates throughout the week aggregating fan theories from Reddit, responding to theories presented on other outlets, or generating new theories entirely. That the decision was made before the show premieres points to the role secondary texts played in shaping discourse around Westworld: while fans have embraced mysteries and theories as modes of reading the text, that market was in part generated by journalists prospecting for page view gold.

The forms of fan engagement emerging around Westworld are, as noted, familiar to fans of Lost, which makes sense given that both are produced by J.J. Abrams, noted lover of the “mystery box.” [5] The forensic fandom that emerged around that show has now developed into a generalizable set of fan practices that can and have been applied to other texts aiming for a similar effect. This has been facilitated by the formalization of tertiary textuality through sites like Reddit, and through the shift in secondary textuality toward generating content that feeds that community.

However, are Westworld and Lost that similar? They are both what Mittell identifies as “drillable” texts, but whereas Lost creates very basic mysteries—what happened, where are we— to structure its narrative, Westworld is not as open in foregrounding these questions. Its pilot is much more interested in philosophical inquiries about humanity, and corporate culture—in my capacity as a critic, I watched the first four episodes of Westworld in isolation in advance of their premiere, and never saw them through the lens of mystery or theories, and was surprised to see the discourse shift so heavily toward those elements in the weeks that followed. I understand where the reading originates from, and the show’s subsequent twists and reveals further encourage such theorizing, but it reinforced how much these discourses were amplified in spaces beyond the show itself.

Writing in the New York Times, James Poniewozik draws a contrast between the two shows, arguing that while Lost “also developed an ensemble of characters with distinctive and rich personalities,” Westworld is by comparison “a story about stories, a puzzle about puzzles, a game about games.” And while this distinction between the shows rings true to a point, how differently might Lost have played out if it had been immediately subjected to the same type of theory-based scrutiny as met Westworld, instead of able to gradually grow into that fan community? While these theories reflect the perspective of a subsection of Westworld’s viewers, and the economic interests of websites generating secondary texts, their predominance in coverage of the show reveals how logics beyond the text itself shape the way Westworld and future shows of its ilk are experienced online.