Loops within Loops: Reflections on the work of Marco Brambilla
David Bering-Porter / The New School 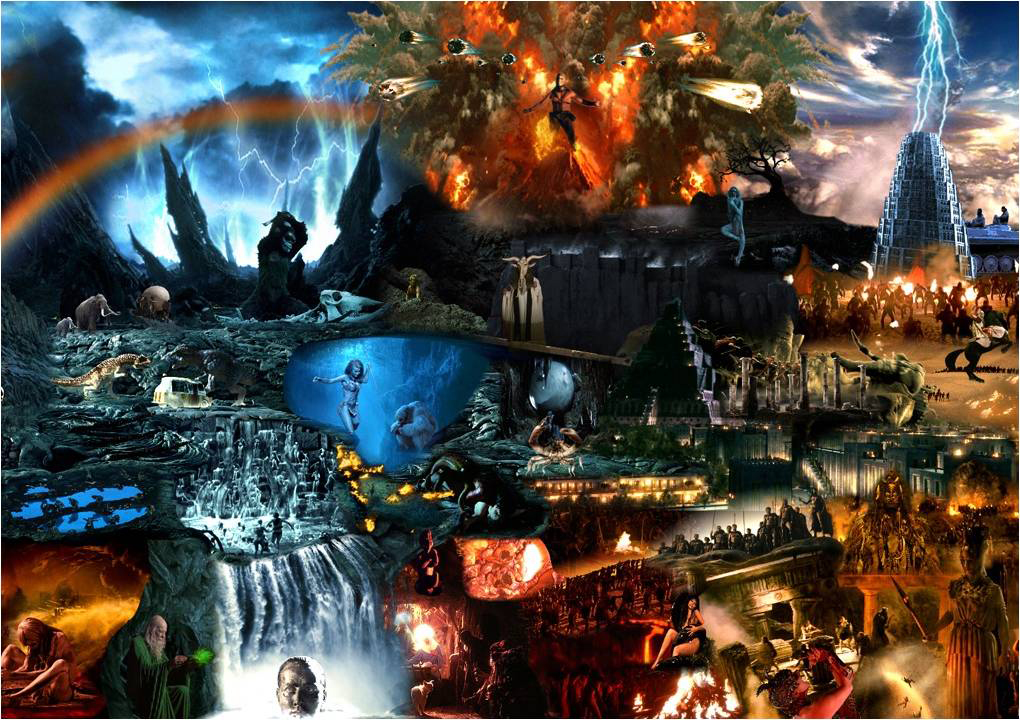 This article addresses the work of Marco Brambilla, a contemporary director and artist whose work in installation and video collage speaks to the broader themes of this special issue: the loop. My interest in the loop began with a previous article that I wrote on the gif as a file format and cultural form in digital media that reflects something important about the temporal patterns of our current stage of late capitalism.1 The repetitive loops of time appearing in gifs are symptomatic of a temporality in which patterns in our political and economic discourse reflect this repetitive impulse as a temporal signature of our time. I would like to return to the loop here and revisit this temporal form through the work of Marco Brambilla and the relationship to the loop that plays out in his work. Brambilla’s richly layered video collages, particularly the Megaplex trilogy, address the loop in different ways, bringing the reflexivity and reflectiveness of this temporal form into greater relief, providing a rich environment for further unpacking of the significance of the loop within our hyper-mediated environment.

The Megaplex trilogy speaks in a language of cinephilia. This is partly informed by Brambilla’s past experience as both a Hollywood director and an avid watcher of movies and these affective investments are reflected in formal qualities of the pieces themselves.2 The Megaplex trilogy is composed of three pieces, Civilization (2008), Evolution (2010), and Creation (2012) and each one displays an intricate collage of looping video footage sampled from a wide range of sources and brought together into a complex, visually dense bricolage of repetition and citation in 3D. Brambilla argues that this trilogy is made in reference both to his past career, which is richly illustrated by the breadth and complexity of visual citation apparent in these works.3 Cinephilia comes to the fore again in the title of the series, Megaplex, which refers to the massive, multiscreen movie theaters screening many different films at once. This multiplicity of screens is echoed in the very substance of the pieces themselves as each one is made up of looping pieces sampled from other films. 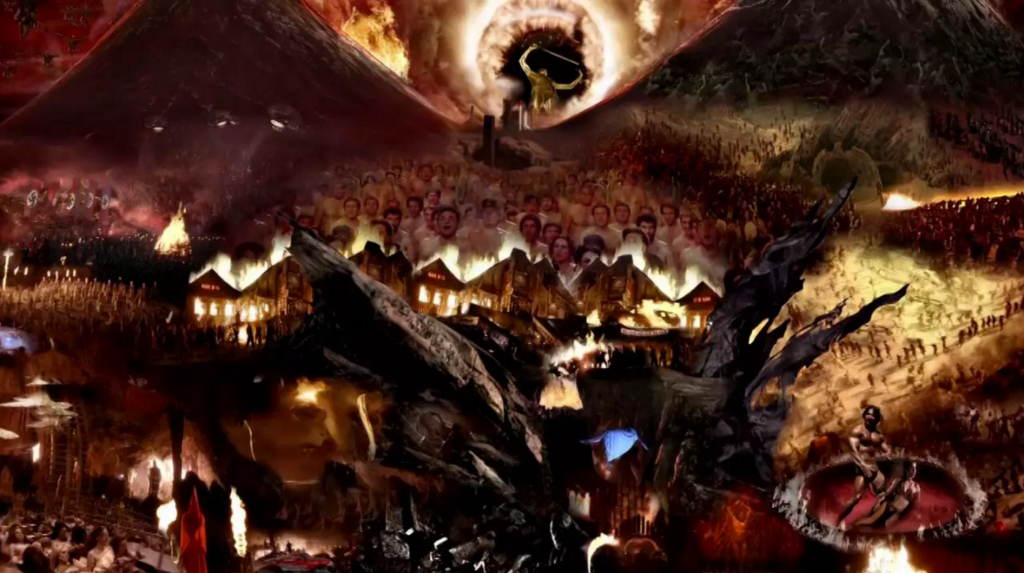 The first of the series sets the tone with a complex imbrication of moving images, sampled and interlaced together. Images from different films are pieced together to form a landscape that changes over time. Each sampled image moves with its own time, looping in a collage of repeating gestures and actions. It is only taken together that these various samples form a landscape within the larger collage and this larger image, too, is moving slowly along the vertical axis. Civilization transitions from a tableau of fiery volcanoes and storm clouds into a more bucolic picture of green hills and clear skies. This shift along a vertical axis, from a hellish landscape towards a more idyllic and utopian space, appears to work as commentary on the title itself, suggesting a grand narrative of progress, a movement ever upwards. The repetitive motion of Civilization, a loop from hell to heaven and back again, lends an air of futility to this progressive narrative and makes it seem less like an absolute change and more like a journey informed by Dante’s Divine Comedy.

Brambilla’s cinephilia is apparent as he draws upon samples and scenes from a host of famous and iconic scenes from other films in order to bring together these pieces into a highly textured bricolage. The samples of looping footage that makes up the larger image serves to animate the piece as a whole. As the eye moves from one pocket of gif-like movement to the next, the whole video seethes with life. Because each video sample operates according to its own temporality, each one remains independent, allowing Civilization to play upon the viewer’s own cinephilia as she searches for the citations and references that are playing out in concert on the larger screen. 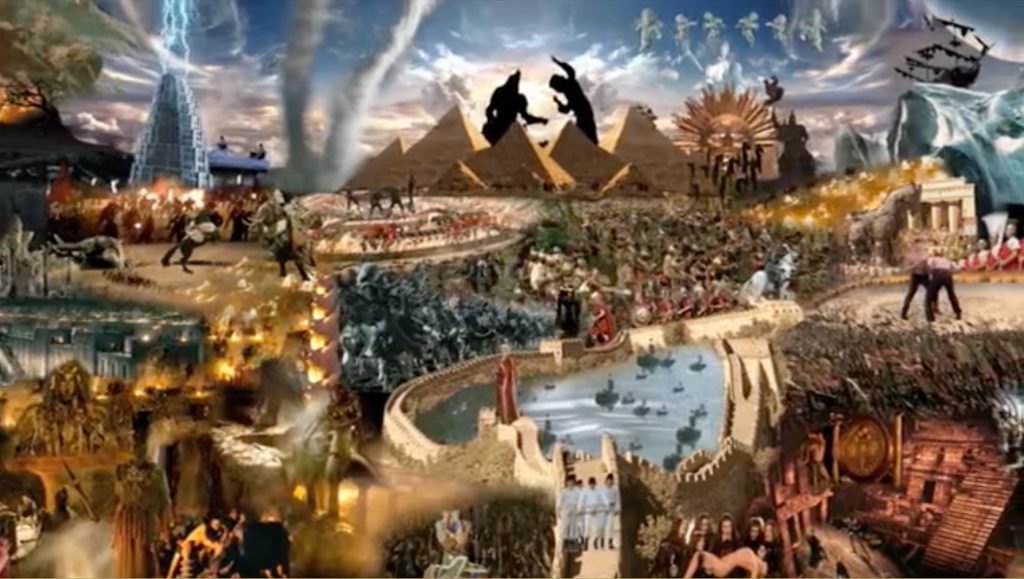 Evolution is constructed in a similar manner, composed of a collection of semi-independent samples taken from popular film and culture, this time scrolling into itself in a loop along the horizontal axis. Once again, cinephilia becomes a self-referential gesture as the work itself speaks in a language of repetition and citation, using iconic films to tie-in their meanings and connotations into the piece. The micro-loops created here seem to compound and operate at multiple levels at once; each sample loops on its own, according to its own time, and these temporalities join in concert into the large piece, which, itself, loops along a horizontal axis. The cinephilia of the piece calls out another loop, working through the language of citation and the love of cinema that resonates between the artist and the audience.

In “Video: The Aesthetics of Narcissism,” Rosalind Krauss argues that the medium of video operates not only through technological elements or physical mechanisms, but also through the “human psyche used as a conduit.”4 Krauss relies upon a certain ambiguity in the term “medium,” which, as she points out, brings together connotations from art, mass culture, and the occult or parapsychology, in which the term “medium” maintains its definition as a conduit of information, only this time with a “human receiver (and sender) of communications.”5 Krauss’ argument shows the way that video creates a feedback loop between psyche and technology; a series of reflections that creates a circuit of engagement between self and object. As Krauss puts it, this is a process of “[s]elf encapsulation – the body or psyche as its own surround” which, she points out, “is everywhere to be found in the corpus of video art.”6 This plays out in Brambilla’s trilogy in this logic of citation and sampling, which emerges from his own cinephilia and traverses through the cinematic references understood by the audience in order to gain its full significance. In Krauss’ words, “video’s real medium is a psychological situation, the very terms of which are to withdraw attention from an external object – an Other – and invest it in the Self.”7 In other words, video exhibits the conditions that psychoanalysis attributes to narcissism. 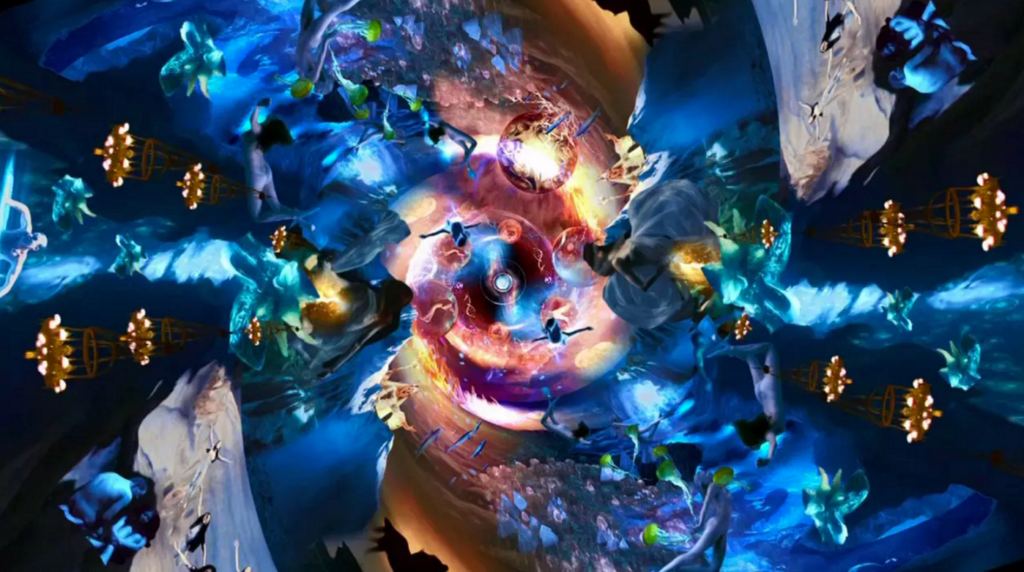 From a formal perspective, narcissism is especially relevant to the final piece in Brambilla’s Megaplex trilogy, Creation, where visual movement in the piece takes on a spiraling motion, recalling a formal echo of a vortex, in which the image exhibits the most explicit version of looping in on itself, doing so quite literally in an expressive logic of involution.8 For Krauss, reflexivity fractures into two categories and it does so through a kind of iteration – it is a matter of returning to an object. To be reflective, in contrast, is to lose distinction and it “implies the vanquishing of separateness. Its inherent movement is towards fusion.”9 The first is repetition with the acknowledgement of difference, whereas the second is the celebration of sameness. Both the reflective and the reflexive illustrate a kind of loop that can be discerned in video art, including the works of Marco Brambilla, but the citational quality of his work of sampling and collaging video into a larger aggregate images seems especially resonant with the notion of narcissism, as it works with and through the affective investments of both artist and viewer. To call out Brambilla’s work as an example of narcissism, or as one that is operating according to a logic of narcissism, is not an insult to either the artist or the work. Narcissism is applied here to suggest that the loops of meaning and reference that take place in and around the Megaplex trilogy necessarily move through the psyche of the viewer and illustrating the way that the loop, as a temporal form, structures Brambilla’s trilogy at a number of nested levels at once. Thus, Brambilla’s work is speaking not only to the significance of the loop as a temporal form reflective of our time, but also of the indistinction between technology and psyche when it comes to the path of the loop and the medium of video, even in the digital age.