Traditionally, fandom has operated on a gift economy. Rather than money, fans exchange gifts – time, effort, creative works – to express affection, solidify social bonds, and reciprocate previous presents. As Lewis Hyde notes, such an economy is characterized by reciprocity, effectively creating and maintaining a cohesive communal structure through social obligation. [1] Much like the commercial economy, fandom’s gift economy has migrated online in recent decades. With Tumblr serving as fandom’s de facto online hub, the platform’s technological affordances have encouraged a different iteration of the gift economy. On Tumblr, gifts are often graphics based and shared through posting and reblogging. Tumblr’s iteration has also afforded the television industry an opportunity to easily (and in some senses, organically) infiltrate and participate in fandom’s gift economy – most recently through Tumblr’s ubiquitous GIF.

GIFs have long been popular with fan communities on Tumblr. Fans create them, share them, and remix them, for a variety of purposes and contexts. Some fans use GIFs to “relive the best moments of that week’s episode or to closely analyze a sequence,” while others use them as comic reactions or to create fanworks. [2] Fans even create GIF fics, in which individual GIFs are combined to imply narrative causality. As Louisa Stein demonstrated in a recent issue of Flow, fans utilize vidding conventions to compile and combine GIFs in various ways to highlight characters, demonstrate themes, and/or illustrate relevant songs. These gifsets – carefully curated and purposefully arranged collections of GIFs – can be arranged in a grid for thematic and aesthetic reasons or posted in chronological order for narrative purposes.

While fan scholars such as Paul Booth, Nistasha Perez, and Louisa Stein have studied gifsets primarily as fan phenomena, we must also consider their provenance: fans are no longer the only parties creating gifsets. [3] In recent years, the social media promotional teams supporting millennial-focused networks like CW, MTV, and Freeform have begun creating GIFs from excerpted television footage and posting them synchronously with the episode’s broadcast. This practice is called live-giffing, a term coined by MTV’s off-air creative team in 2012. Rather than being solely created by fans, for fans, via torrented episodes, gifsets are now also created by the networks and shared via their official Tumblr accounts. This small change marks a significant shift in Tumblr’s gift economy: as advertising materials, the official GIFs that circulate through Tumblr fandom now connote both communal and commercial value. 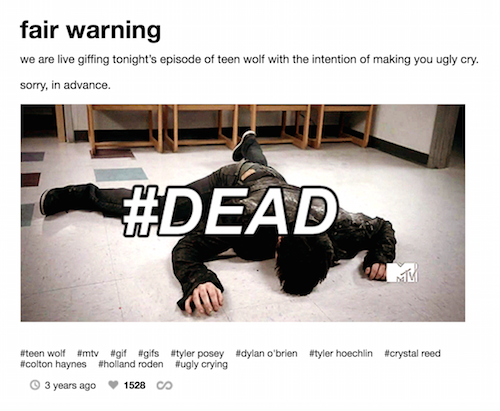 Like the contemporary practice of livetweeting, live-giffing involves posting GIFs in real-time via the show’s official social media account. Unlike livetweeting, however, live-giffing evolved out of and largely operates within the established fan practices on Tumblr. By posting high-quality gifsets on their official Tumblrs (essentially gifting them to fans and followers), networks are effectively co-opting fandom’s gift economy. These gifted GIFs are often branded with the networks’ logo so, as they circulate through Tumblr fandom, they function simultaneously as fanwork fodder and promotional material. Enabling and encouraging the dissemination of these GIFs allows for a more targeted circulation of advertising materials than traditional top-down promotional practices could achieve. Not to mention it’s free.

MTV’s Teen Wolf may have been the first show to embrace live-giffing, but others soon followed. In fact, most of the shows on the CW, MTV, and Freeform post GIFs occasionally on various social media platforms; some even post them in time with their episodes, though they usually reblog GIFs and gifsets originally created by fans. [4] Of the twenty-eight currently airing shows on these networks, thirteen engaged in live-giffing practices during the 2015-2016 season. [5] Freeform, more so than any other network, has embraced this emerging practice: their promotional teams currently live-gif eight of their nine scripted shows. One of their newest shows, Shadowhunters, is emblematic of both the industrial logics and fannish consequences of these industrially gifted gifsets. 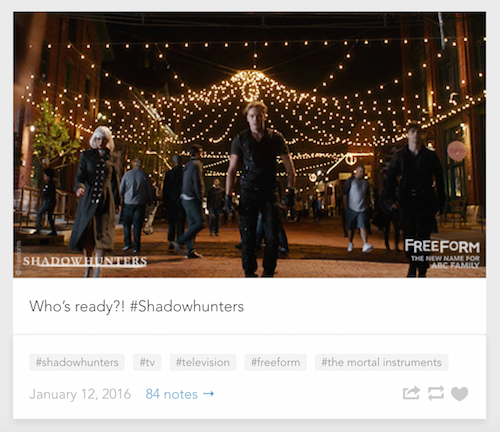 While shows like Supernatural and Teen Wolf adopted live-giffing practices mid-run (sometimes mid-season), Shadowhunters episodes and gifsets premiered simultaneously on January 12, 2016 – the same day ABC Family officially dropped “family” from both its moniker and target audience. Freeform’s rebranding was spurred by President Tom Ascheim’s desire to reach “Becomers,” a network-coined term for the 12-to-34 year old demographic that covers the younger swath of millennial viewers. According to Ascheim, the name was chosen to reflect the digital literacies of “Becomers”:

Media is oozing onto all sorts of different screens and platforms and it feels kind of free form in the way that people find it. Our audience doesn’t see themselves as consumers, but as makers so we wanted a name that felt participatory — they would be part of the process. [6]

Freeform, like the other millennial-focused networks, is cultivating a participatory, collaborative relationship between producers and consumers. By live-giffing their episodes on Tumblr, Freeform can leverage their multiplatform promotional efforts to encourage and direct, if not control, fan engagement.

Essentially, the industrially gifted gifsets function as native advertisements for potential audiences. As fans repurpose and reblog the official GIFs, their followers – who may or may not be aware of the show – will be introduced to Shadowhunters via the branded, network-provided GIFs. Creating and distributing gifsets on Tumblr increases market penetration with desirable demographics (the “Becomers”) while decreasing advertising costs. Networks are able to leverage digital technologies and the portability of television to collapse production hierarchies and outsource advertising labor to fans. Co-opting the extant fan practice of freely circulating GIFs allows promotional teams to tap into their fandom’s established distribution channels at little-to-no cost. While these practices don’t preclude fans from creating and using their own GIFs, they are indicative of industry’s increasingly active and influential participation in fan spaces and practices, as well as the eroding boundaries between commercial and gift economies.

For example, here a Tumblr fan has posted two GIFs (from Teen Wolf and Shadowhunters, respectively) to celebrate and support their favorite TV (relation)ships across fandoms. Under each GIF, attribution is given to the source from which they were reblogged. Notably, neither mentions the official Teen Wolf or Shadowhunters Tumblr. With each reuse and reblog, the provenance of the GIF is further obscured – unlike the network’s branding, which can be seen in the lower left-hand corner of the Shadowhunters GIF. [7] As this post demonstrates, Tumblr’s rhizomatic reblogging allows these industrially gifted GIFs to circulate ever further from their industrial origin while maintaining their promotional potential. As fans continue to express their affection through gifts and GIFs, networks continue to benefit financially.

Providing industrially gifted gifsets is neither universal nor obligatory for television networks. However, the practice is gaining traction among millennial-focused networks, both broadcast and cable. As these viral marketing strategies continue to collapse production workflows, textual boundaries, and industrial authority, we must consider how they also collapse fan-producer boundaries and blend commercial and communal value. Just a year after they began live-giffing on Tumblr, Teen Wolf began directly outsourcing their gifsets to fans like qhuinn and Neptunepirate – a model of professionalization that has only spread in the interim. Fandom has, by nature and by necessity, functioned via a gift economy. As television fandom is increasingly monetized and its fans are subsequently professionalized, we must consider how industry’s incursion into fannish spaces imbalances the gift economy and complicates the fan ecology.