In the Gif Space Michael Newman / University of Wisconsin-Milwaukee 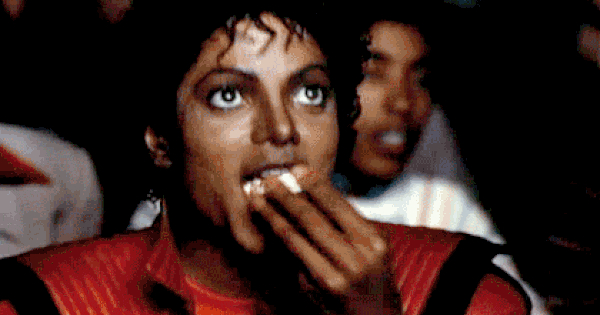 Maybe some of these gifs are familiar, playing on a silent loop in your mind and putting a smile on your face just from reading them described in words: crying Dawson gif, Jennifer Lawrence OK gif, Michael Jackson popcorn gif, blinking white guy gif, clapping Citizen Kane gif, Homer into the hedges gif, “This is Fine” dog gif, Kermit typing gif, Leo/Gatsby champagne toast gif, pizza delivery to a room on fire gif.

There’s a pleasure in the familiar when reliving such moments of emotional acuity and then reliving them again and again as they repeat. But these little loops are useful too, subbing in for verbal exchange in texts or tweets when emoji are too generic and words are elusive or just take work to summon. Language can be less potent, less immediately and fully expressive anyway. Gifs function in conversation as embodied emotional displays to make up for a lack of facial expressions and gestures online. [1] You can borrow a pair of rolling eyes from Krysten Ritter or Judge Judy to convey exasperation.

Gifs are available and easy to find using tools integrated into platforms like Twitter and the keyboards for messaging apps, which allow searching for specific content like “Drake” or “thumbs up” and suggest categories of reaction like “OMG,” “oh snap,” and “oops.”

These gifs come in many varieties, but the most familiar tend to be clips of commercial pop culture using figures who are already well known to gif sharers. SpongeBob, Liz Lemon, Kermit the Frog, Rihanna, Kim K, Britney, and the Minions are gif superstars. Harry Potter and Star Trek movies, The Office and Adventure Time furnish myriad clips. How did infectious loops extracted from movies and shows find their way into interpersonal communication, into tweetstorms, Facebook comments, and Slack convos, silently auto-playing on all of our screens? Turning brief bits of movies and television into gifs spread as a grassroots practice of media fandom within communities that function as gift economies (though the media industry has also gotten into the game of making its own gifs). [2] Like so much about mass media in the 21st century, the story of gifs is one of cultural power and agency see-sawing from industries to people and back again.

Giffing is still a practice of fans, remixing content as a new vernacular of repurposed moments. But the platforms where gifs are shared, the social networks and messaging apps, are integrating fun, user-friendly tools for search and categorization so that most sharers are now distant from the original work of producing and circulating a gif. Many sharers of gifs might have little knowledge of the original context or authorship of the little loop used to convey “mic drop,” “smh,” or “bitch please.” The gif is functioning as a more semantically replete and richly connotative version of an emoji. [3] Good gifs crop out extraneous parts of the frame, showing nothing but a feeling, like these gifs of Jonah Hill and Emma Watson. (Ever notice how gifs are rarely in the 16:9 ratio of most professional media content?)

What’s left is not so much a clip from a movie or a TV show (Get Him to the Greek and The Jimmy Kimmel Show, respectively) as an affect bomb you drop to express your reaction in a given moment. A gif can be many things, but this use is an expressive enactment: eyerolling, jawdropping, facepalming, shrugging, clapping, nodding, or hairflipping. The meaning is a feeling: ecstatic or pissed or judging you. Gifs don’t communicate information so much as expose interiority: this is me right now.

Both the platforms and the services facilitating gif-sharing are commercial, for-profit actors whose ultimate purpose is to exploit the sharing economy, collecting data about users and commodifying our attention. The story of gifs is exemplary of the digital age in popular media as users appropriate commercial media for their own uses and pleasures, only to have their participation and creativity, their communities of practice, milked as free labor producing commercial value for someone else.

The effects on the gif world go beyond commodification to shape what kind of gifs are made, used, and taken up as a shared resource of pop culture quotations. [4] Making money off of gifs is shaping the kind of gifs that become familiar and available. Just as Netflix is defining a new canon of television shows based on its available content, so are the gif companies enshrining a gif canon of loops that frequently rise to the top of searches and of the “trending” suggestions, like the exuberant twerking girl from Toddlers and Tiaras and the Fozzie Bear facepalm.

The magical randomness and beauty of discovery when it comes to gifs is fading as usage is encrusted in convention, as gif sharers draw from familiar genres and tropes of giffing organized into a repository of reactions organized alphabetically, “agree” to “you got this.” What was subcultural and novel is becoming formulaic and predictable.

Two rival startups greasing the wheels of this gif mainstreaming are Giphy and Tenor, and both have the same agenda of owning “the gif space.” This means becoming Google for emotions, facilitating a flow of expression rather than information. If Facebook owns the “social graph,” the gif startups want to draw an “emotional graph.”

Giphy is better known and more highly valued, and functions both as an online search engine for gifs on its own site and in Twitter and Facebook, and a brand partner for live television events, capturing thousands of moments of award shows, sporting events, and other content as it airs. It is also a gif studio making originals such as bundles of gestures and expressions featuring actors from the CW series Riverdale, whose target audience of people too young to remember Hillary Clinton as a First Lady overlaps with Giphy’s.

You are likely to have used a Tenor product if you have sent a gif in a text message; their GIF Keyboard search tool is used on millions of mobile devices.

Both Giphy and Tenor have a vast library of gifs tagged by content and type, organized into “reaction” categories, and the millions and billions of searches for these gifs could be fertile terrain for advertising. Tenor has sold the top result in searches for certain terms like “yolo” to sponsors promoting a new movie or a brand like Domino’s, which is to say, sometimes the gif you share is an ad. While this isn’t the apocryphal “subliminal advertising” of the past, it shares with other instances of seamless or frictionless marketing strategies — branded entertainment, ads in search results — a subtlety and integration into patterns of media usage that makes you wonder how much consumers recognize that they’re targets of a persuasive campaign and a big data operation. [5]

Reaction gifs illustrate the push-pull dynamics of participatory media as user networks are subsumed and exploited by commercial actors from legacy media giants to cool-kid startups. They occupy a blurry boundary space between media industries and grassroots communities. Giffers appropriate mass media, poaching fleeting moments for new purposes. Gifs can pay tribute and give users new opportunities to geek out over fan crushes and favorite scenes. In turn, as highly engaging, “relatable” media, gifs are ripe for being returned to the circuit of commercial exchange, offering another opportunity to extract value from the audience’s attention as corporate profit-seeking creeps into every once-private moment of life.

The gif canon is at once a new slang, [6] a lexicon of emotion expressions, a monument of fandoms, and a platform for monetizing billions of people’s conversations, enlivening them with popcorn munching, side-eye glancing, and happy dancing. As commerce and advertising colonize more and more of our online realms, we really should wonder: whose gif space is it?