A&E’s new series Bates Motel starts with two characters struggling to begin anew and escape the past—a fitting entry into a text that reworks Alfred Hitchcock’s Psycho (1960) as it echoes Marion Crane’s flight at the beginning of the film. The episode begins with the suspicious death of Norman Bates’s father, and the purchase of the Seafarer Motel by Norma Bates. As mother and son arrive at the eponymous motel, Norman responds to his mother’s desire to begin again by saying “Maybe some people don’t get to start over. Maybe they just bring themselves to a new place.” Maybe, as Norman will later say in Hitchcock’s film, “We’re all in our private traps, clamped in them, and none of us can ever get out.”

Indeed, as the series is marketed as a prequel to Psycho, the question of the narrative is not what will happen, but how will it all go wrong? Norman’s fate as the psychotic mother loving/hating killer is all but determined—the terror and pleasure of the horror reboot is in seeing the monster inevitably uncovered and revealed to us. Bates Motel is an Oedipal narrative in oh so many ways. 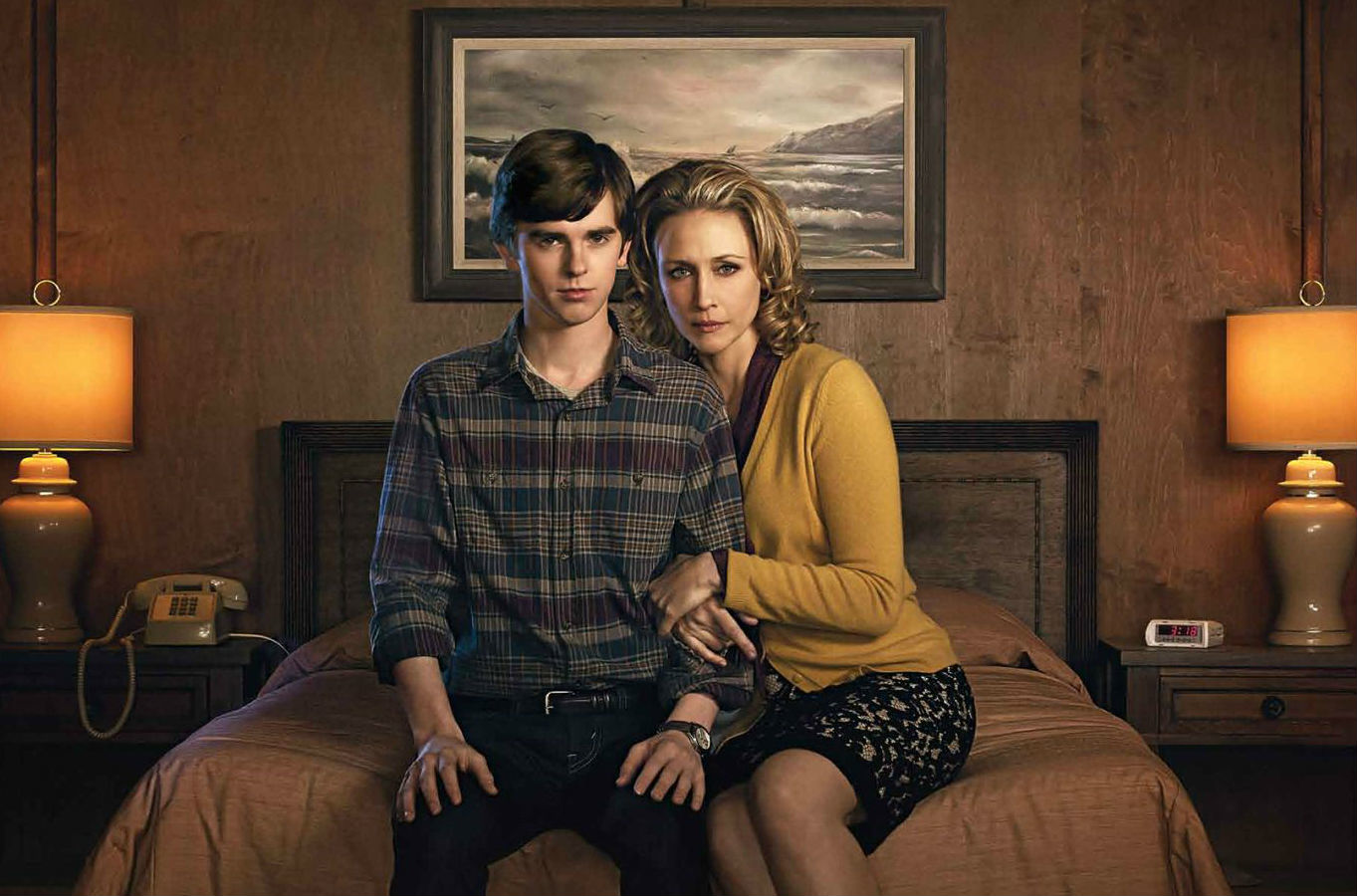 In the last five years, audiences have seen upwards of a dozen remakes of horror films, including Friday the 13th, The Hills Have Eyes, The Last House on the Left, Black Christmas, Halloween, When a Stranger Calls, My Bloody Valentine, Amityville Horror, Prom Night, The Wicker Man, Dawn of the Dead, Invasion, The Fog, and The Omen, to name a few. Forthcoming remakes include Nightmare on Elm Street, Night of the Demons, It’s Alive, Sorority Row, Piranha, Children of the Corn, The Eyes of Laura Mars, and Hellraiser. Four of these have gone on to spawn sequels and, one assumes, a renewed franchise.

“Reimagining,” or more frequently “rebooting,” has become a popular way to promote films that chose to revisit familiar narratives with an altered cinematic aesthetic. This approach extends beyond the horror film, most famously in the recent Dark Knight and Star Trek franchise reboots. Contained in the word choice is the notion that these franchises have failed, or at least lost energy—as if repeated sequels had somehow depleted the original text of life. The reboot seeks to give the audience the familiar narrative, but to modernize it. This, however, is where Bates Motel is doing something very interesting.

Bates Motel is a prequel to Psycho set in a modern time. But instead of bringing Norman and his mother into modernity, it uses their chronological stasis to specifically code them as out of time. The design of their previous home, their dress, their early-seventies automobile, and Norman’s taste for decades-old music and movies are all temporally dislocated from the contemporary setting of the program. 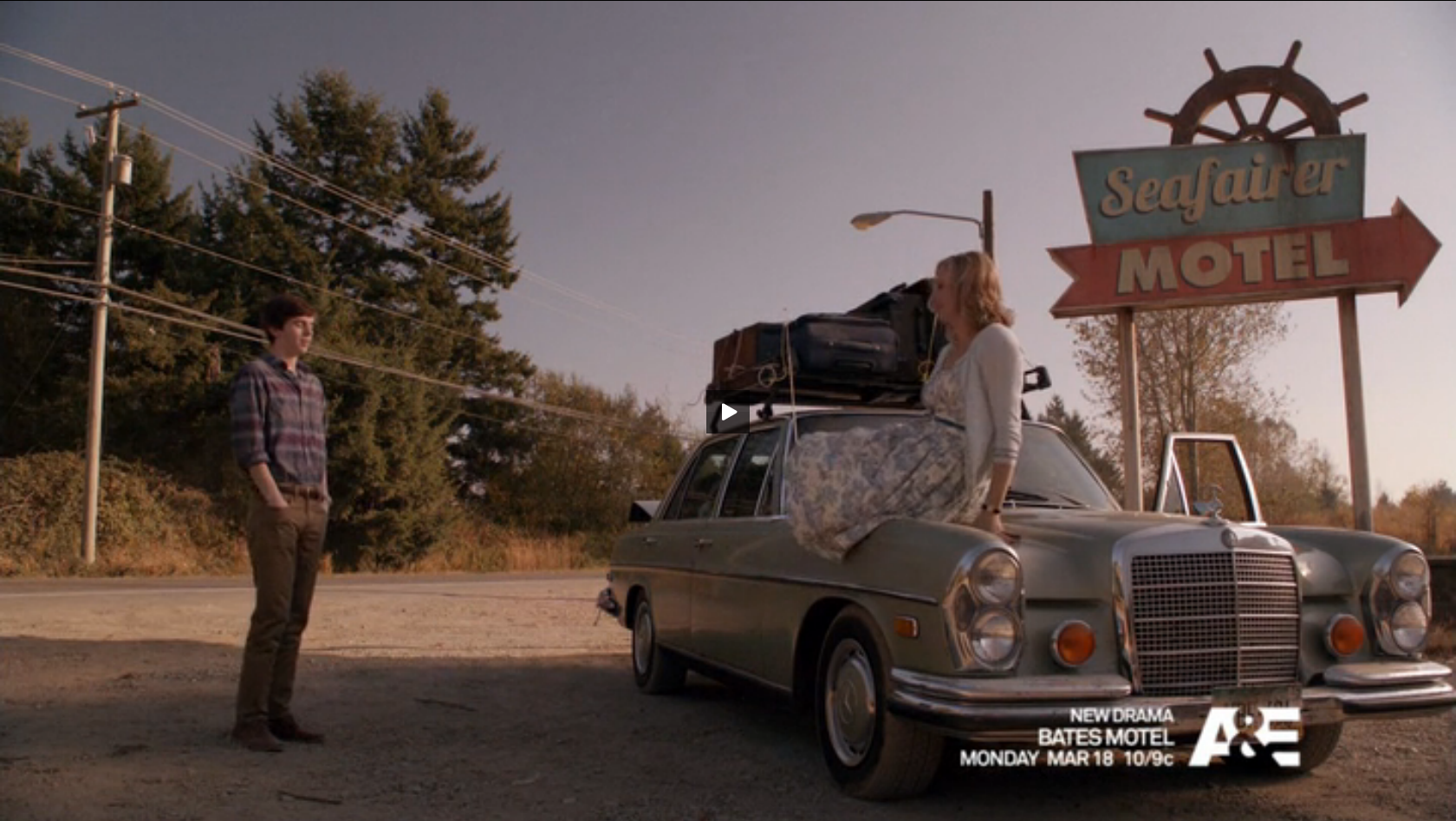 Indeed, we may think of Bates Motel as an “elsewhen” narrative that seems to coexist in multiple time periods simultaneously, as in Bride of Frankenstein, Edward Scissorhands or Napoleon Dynamite.1 The series is also clearly invoking Twin Peaks, which was animated by a similar postmodern nostalgia and temporal pastiche. As such, chronology functions symbolically rather than realistically. The 1960s past, as evidenced by the Bates home and the intervention of Norman’s poetry teacher Ms. Watson, seems linked to expression and emotion, but also dark secrets and trauma. 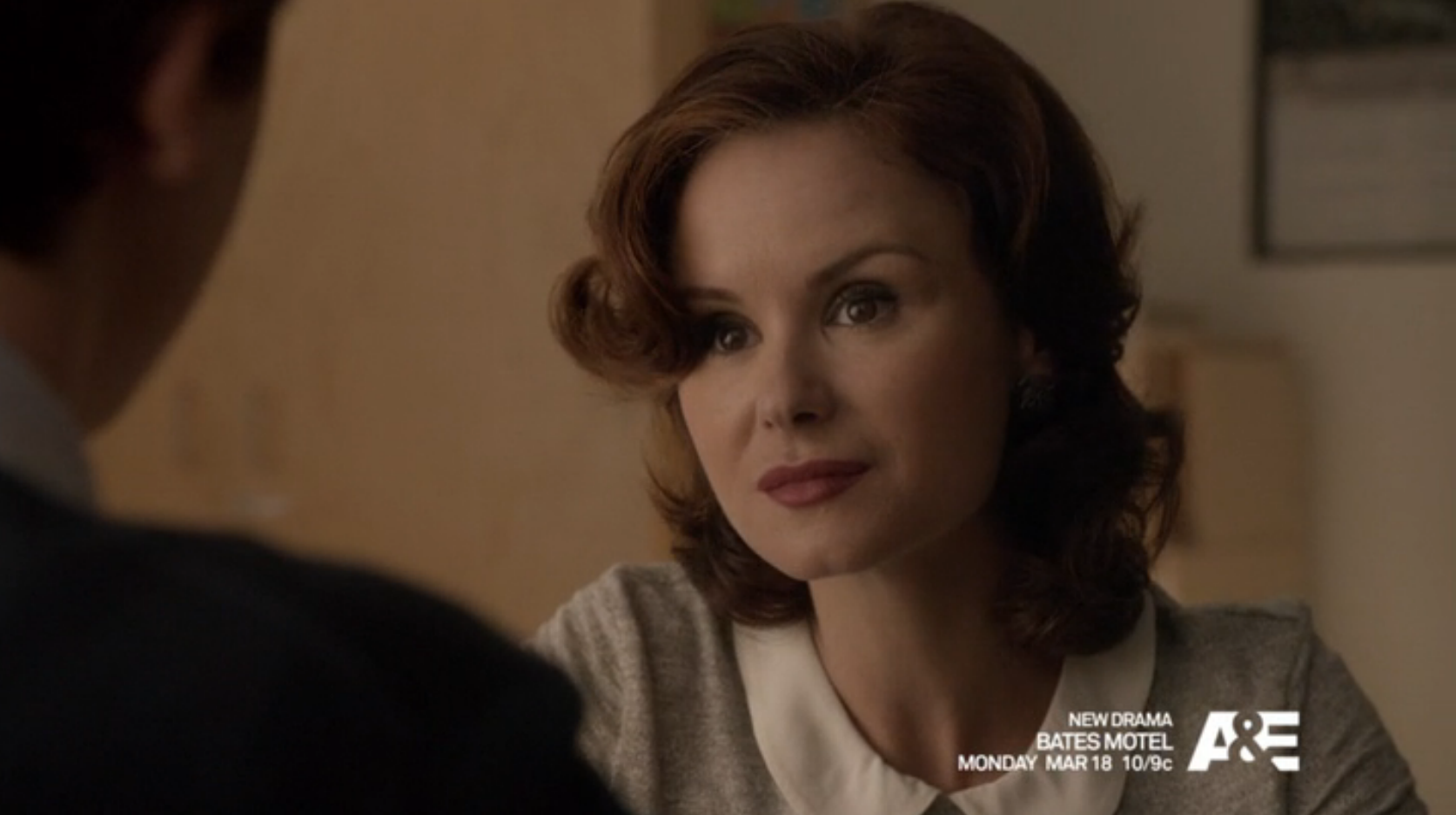 Images of the present, like the cellular technology of the young girls at Norman’s school and the drunken rave they attend, seem linked to disconnectedness, numbness, and voyeurism. At the rave, the episode lingers on Norman’s subjective POV as he silently surveys the foreign, contemporary teenage culture, finally stating, “There’s a lot to look at.” This dichotomy is fitting for a Hitchcockian narrative, which so often vacillated between intense subjective experience and cold objectivity. This conflict between obsolescence and modernity recalls Brian DePalma’s Carrie, in which Carrie White was similarly positioned between modernity and her mother’s Old Testament antiquity. Like Carrie, the series Bates Motel uses distemporality to mark certain cinematic spaces as creepily static and unyielding. As the future of Norman Bates is in the past (the 1960 film), he must remain out of time to become who we know him to be.

In terms of audience engagement, the reboot offers a set of valuable questions concerning spectator pleasure. If the audience already “knows” (or thinks it knows) what is to come, what is enticing about a reboot? The pleasure of these films, I argue, can be accessed through comparison to an unlikely set of films: the makeover genre. This cycle of films, of which we might include Now, Voyager (1942), My Fair Lady (1964), or Miss Congeniality (2000), for instance, is predicated on the transformation of an unsuitable woman into a properly feminized and classed object of desire. As several critics have noted, however, the genre is entirely dependent on the true image of the star “revealed” by the close of the film.2 That is to say that a film such as Now, Voyager is not about fixing an ugly woman played by Bette Davis as much as it about uncovering the true Bette Davis underneath all of the fabrication of dowdiness.

The monster movie is also structured around the dynamic reveal.3 So too, does it tease our desire and fascination to have the creature’s true form revealed. This is even more pronounced in the horror reboot that investigates the “becoming” of a monster familiar to audiences, as in Bates Motel, Halloween (2007), or Friday the 13th (2009). As a kind of perverse makeover genre—or a makeunder genre—they fulfill our desire to see monster’s true self4 brought into being.

The rebooted horror franchises tend to make their killers more humanized than their former counterparts. Jason in Friday the 13th becomes a sort of mentally unstable isolationist, attacking teenagers who dare to venture onto his land—more Ted Kazinsky than Frankenstein. No more a slothful Goliath awaiting the convenient broken ankle, the rebooted Jason lives off the land and travels in subterranean tunnels to hunt his prey. In Halloween, Michael Myers emerges as a bullied man-child with explosive fits of rage, transformed from a lumbering Golem to a steroidal juvenile delinquent. 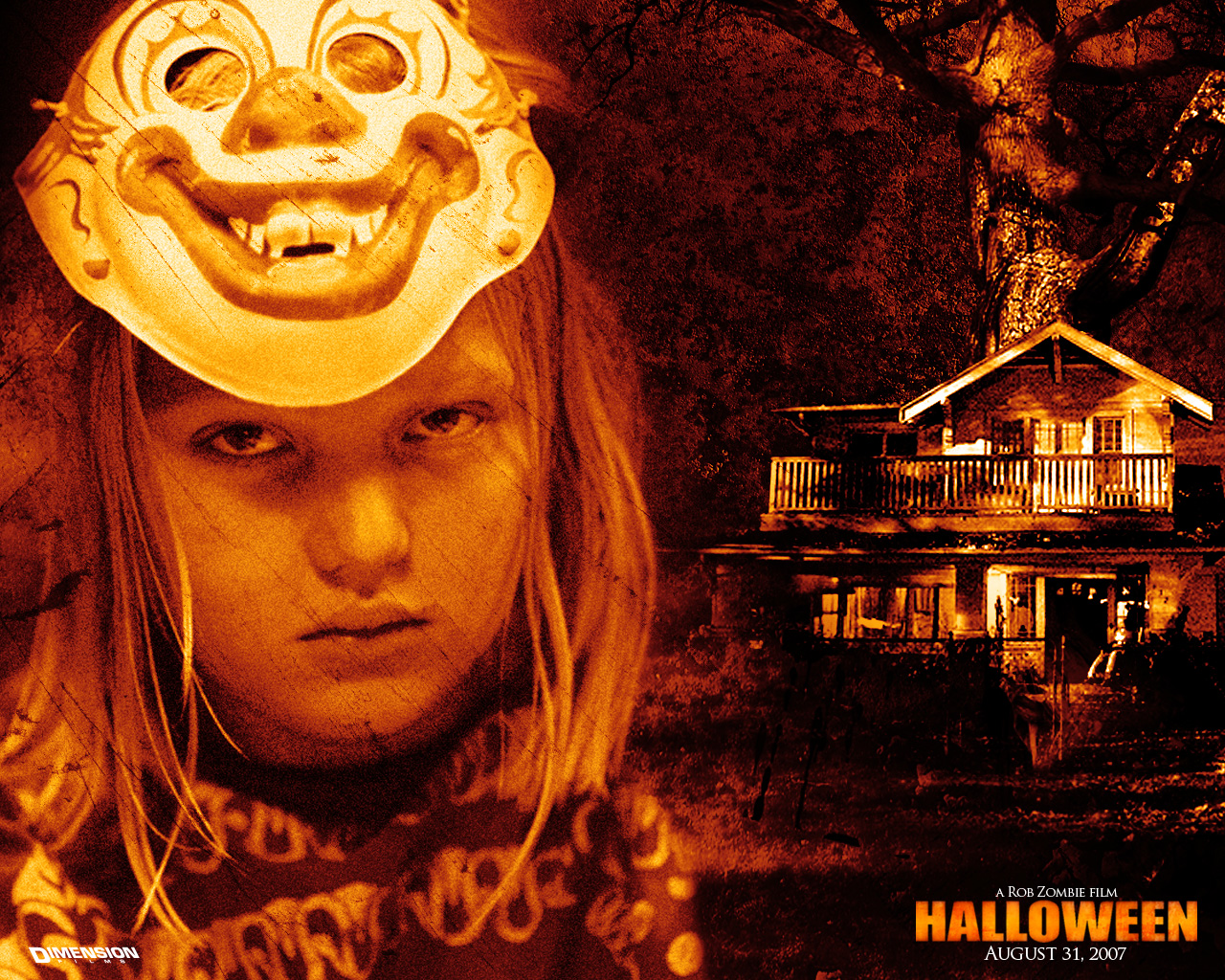 Indeed, several rebooted franchises seem to take a noted interest in the monster’s origins—both Friday the 13th and Halloween revisit their character’s childhood as a means of eliciting an almost-but-not-quite sympathy for the homicidal maniacs at their center. Rob Zombie’s remake of Halloween expands the famous child’s POV opening to a 40-minute origin narrative that details the abuse leading to the killer’s dissociative disorder. Friday the 13th takes the death of Jason’s mother in the original film as the site of childhood trauma that will create the grown killer. In a nod to Lila Crane’s exploration of the Bates home in Psycho, one set of unwitting victims actually stumbles across Jason’s cabin with his tiny boyhood bed, seemingly held in stasis from the moment of his childhood trauma. 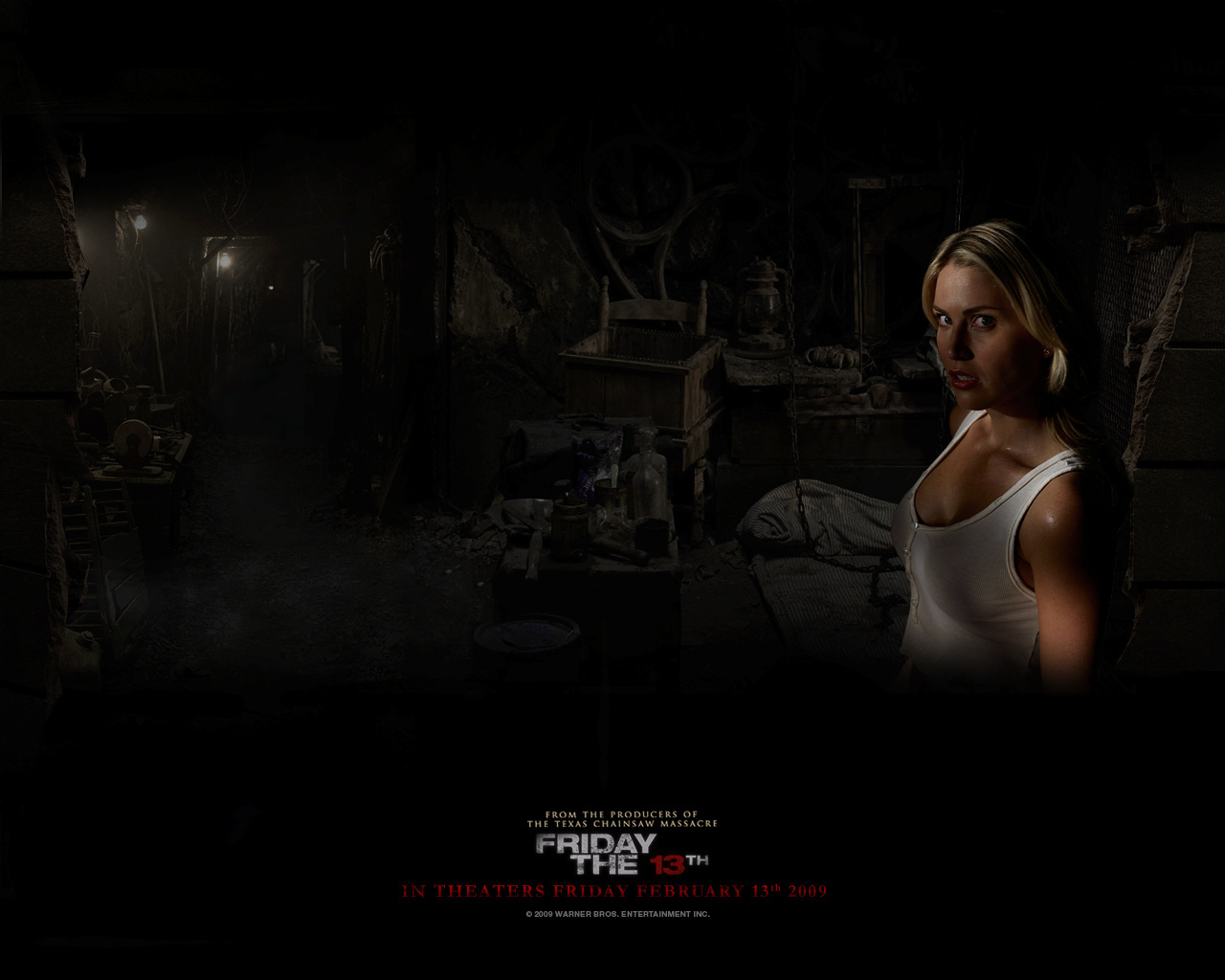 Jason’s room in Friday the 13th

Most importantly, both Friday the 13th and Halloween narratively turn on the moment in which the troubled child “discovers” his identity as a monster by donning his mask for the first time. Since we know the monster best as their masked selves, it is in fact the mask that is the true identity—in masking, they become authentic.5 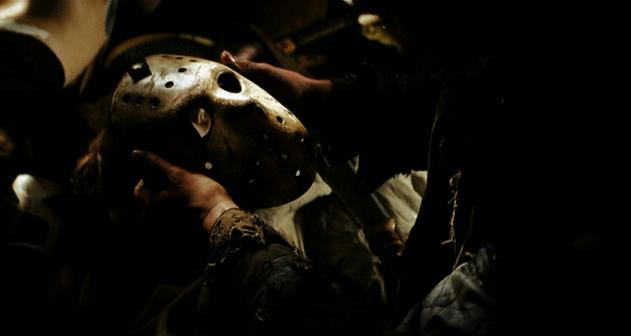 The makeover genre, of course, enacts transformation through the removal of some items (glasses, body hair, ill-fitting or masculine clothing) as it seems to naturalize the addition of other items (makeup, jewelry, hairstyling, modern clothing). But this is, of course, also a mask—and part of the pleasure of the reveal is seeing the actress remove the mask of character role to don the mask of stardom. In the horror reboot, for whom the monster is the star, the audience is primed for the climactic moment in which the creature removes the false mask of normalcy and dons the true mask of monstrosity. For Norman Bates, that moment may come when we see him take on the guise of his mother for the first time—and remain clamped into the trap of narrative inevitability.