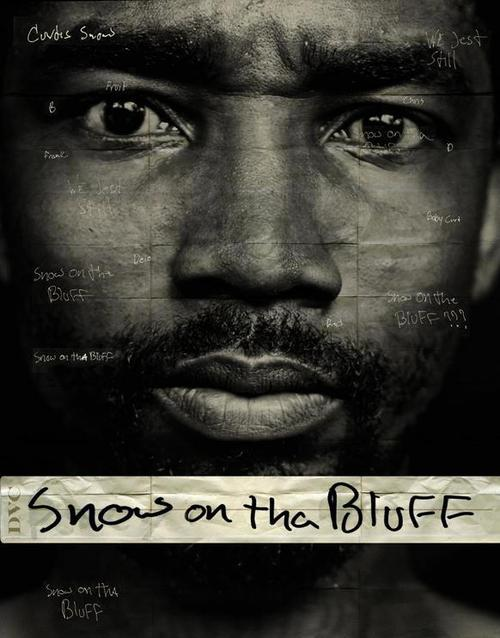 The project began when Curtis Snow contacted director Damon Russell, requesting help editing hours of raw footage documenting his everyday life. Shortly after, Russell and Snow constructed a lightly fictionalized narrative around Snow’s footage and began shooting dramatized scenes. Snow on tha Bluff premiered at the 2011 Slamdance festival, and gained widespread distribution on June 19, 2012, making it available on DVD, digital download, and instant steaming via Netflix, iTunes, and Amazon. Despite its controversial subject and non-conventional narrative, Snow on tha Bluff was the most watched film on Netflix Instant on September 11, 2012. Ultimately, the film’s widespread appeal can be, at least in part, attributed to marketing Tha Bluff within a hyperreal framework following the film’s mainstream DVD and digital streaming release.

Snow on tha Bluff’s executive producer, Michael K. Williams, who played Omar Little from the acclaimed series The Wire, contacted Snow and Russell after seeing several poignant YouTube clips. Williams stated he was attracted to the project because he viewed Snow as the “real live Omar Little.” Williams’ promotion of Snow as an authentic embodiment of Omar Little through social media platforms primed the market, and especially Wire fans, for Tha Bluff’s mainstream release. Wire fans cite the shows’ authenticity and relation to real events as reasons they enjoyed the series. Williams’ personal history of childhood homelessness in New York City and prevalent facial scar, which was sustained in a bar fight, added credence to the series and their fans’ claims of authenticity. In other words, Williams, like Snow, added ‘street cred’ to their respective projects.

Tha Bluff’s promotion teams are attempting to further leverage Williams’ fame and ties to The Wire by positioning itself in relation to the show’s established acclaim. For example, the movie’s upcoming Blu-ray package release featuring Rolling Out Magazine’s blurb “grittier than The Wire” demonstrates the complex relationship between Tha Bluff and The Wire. Recognizing The Wire’s ready-made audiences’ preferences, Snow on tha Bluff frames itself as an extension of pre-existing social dialogues concerning crime, poverty, and racial relations, while simultaneously promoting itself as a more authentic, “grittier” ‘hood’ experience. 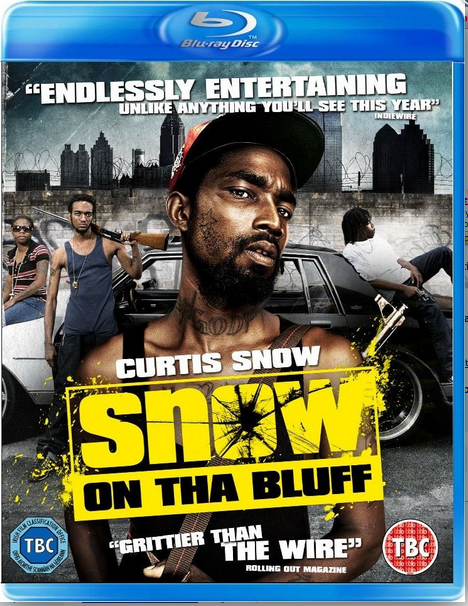 Recognizing the marketing limitations of documentary classifications and styles, the film’s utilization of fictionalized narrative provides an accessible framework for reality TV audiences. Russell’s background in reality TV, producing reality docu-dramas like A&E’s The First 48 contributes to Snow on tha Bluff’s hybrid style. In an interview earlier this year, Russell commented on his background saying, “people complain about reality TV, but actually it’s kind of an interesting form. You take real people, and you have real stories and you’re fudging things to try to make them interesting for TV.”

Emphasizing ambiguity and its attachment to hyperrealism has direct ties to reality television. In his scholarship on hybrid documentaries, film scholar Ohad Landesman points out, “the hybridity between fact and fiction in reality TV is often achieved through an aesthetic ‘illusion,’ where shaky handheld camera and unmediated spontaneous action create the impression of a privileged representation of authenticity inside a fictional and staged environment.”1 However, because Snow on tha Bluff captures illegal activities and illicit spaces, its shaky handheld aesthetic signals a direct mediation rather than privileged representation of authenticity. Whether the footage is dramatized or real, the onscreen presence of illegal guns and drugs, and images of the Bluff’s squalor indexes material realities that register social meanings. As a result, the film’s classification as a “hyperreal gangster drama” reaches a broader audience without detracting from its social value.

Landesman explains that, “it is the viewer who ultimately determines the mode of engagement with the object at stake, sizing things up and settling the balance between fiction and reality.”2 As Landesman argues, viewers’ engagement with hybrid films involves a negotiation of multiple registers or meaning that may or may not include scrutinizing the footage’s veracity. Nevertheless, the confusion between reality and fiction prompts curiosity regarding Snow on tha Bluff’s veracity. In Tha Bluff’s press kit, Williams, Russell, and Snow collectively address the question of what is real and what is fictional, encouraging viewers to “watch the film and decide for yourself.” After Snow on tha Bluff’s premiere, the Atlanta Police Department launched an investigation based on film footage they claimed to be video evidence of criminal activity. Thus, for legal reasons, no one involved with the film is allowed to divulge which elements are truly real and/or fictional.

Because Tha Bluff has no fixed relationship with reality, the text is open to a hyperreal framework. Crime novelist Irvine Welsh’s Guardian article about The Wire describes Omar as “a hyperreal fantastic character” and argues that Omar hyperreal quality “works as grammar, adding something rather than weakening the plausibility of the show.” Williams’ authentic embodiment of Omar allows his characterization to be registered as hyperreal without compromising the show’s realism. Similarly, Tha Bluff’s unfixed position yet inscribed authenticity primes the movie for creative promotional tactics. Tha Bluff’s official movie poster, for instance, features a hyperreal, glossy rendering of Snow and his fellow robbery boys. The poster, featured on Tha Bluff’s Blu-ray cover, transforms gangster paraphernalia like guns, tattoos, and gold chains, into symbols that immediately attract a host of potential consumers. However, Tha Bluff’s guerilla aesthetic, its authorization by Williams, and its connection with The Wire prevent its hyperreal poster from compromising the movie’s authenticity.

Distinctions between the first and second official trailers for Snow on tha Bluff call direct attention to the film’s hyperreal framework. The first trailer, published on YouTube in December 2010, promoted Snow on tha Bluff’s premiere at the 2011 Slamdance Festival and other festival screenings. It roughly pieces together various scenes to showcase its guerilla, amateur aesthetic. Jumpy, handheld framing, the use of night vision, and a reflexive camera acknowledgment characterize the film’s aesthetic. The second official trailer, published on YouTube in June 2012 to promote the movie’s mainstream DVD and digital steaming release, applies a highly stylized aesthetic to the film’s raw footage and includes previously unseen dramatizations (which are mysteriously absent from the film). The digital application of sepia tones in the second trailer transposes a uniform style onto the film’s raw footage, which subverts its relationship to authenticity and makes it aesthetically appealing to mainstream audiences. Moreover, the intermittent cuts to images of Snow riding a four-wheeler through the Bluff simulate a linear narrative structure making the trailer more cohesive. Using images not featured in the film (e.g., Snow riding a four-wheeler), endows Snow with a persona that is constructed outside the film text. Snow’s AK-47, which is strapped to his chest in the second trailer as well as the movie’s official poster and subsequent promotional photography is only briefly featured in the film, but becomes the totem of his hyperreal persona. Rather than detracting from Snow on tha Bluff’s authenticity, Snow’s persona functions as a shorthand that resonates with viewers and appeals to a multitude of potential viewers.

Recently, Funny or Die posted a video of an old white couple sitting on a couch talking about Snow on tha Bluff. The video resonates because the couple represents the last people expected to watch a “hyperreal gangster drama,” but they applaud the film’s social value stating that, “everyone needs to watch it”. Russell has even confessed his own skepticism about the Snow on the Bluff’s mainstream reception, explaining in an interview that the movie’s success still “blows his mind.” He thought the film would ultimately only be appealing to the gangster community. This continued belief further underscores the ambiguous position Snow on tha Bluff inhabits. Because the narrative relies on an amalgamation of both truth and fiction, its hyperreal marketing allows audience members, and even the filmmakers themselves, to continually question the film’s reception without hindering its social aims or values.