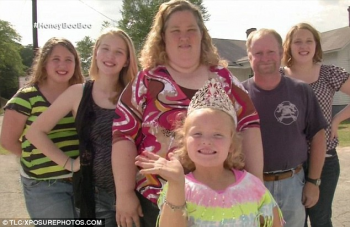 Structurally, Here Comes Honey Boo Boo is the unholy union between two popular TLC programs—Toddlers and Tiaras, where Honey Boo Boo rose to prominence through a viral clip on YouTube, and Extreme Couponing, where housewives such as Alana’s mother work the coupon system strategically to stockpile inexpensive goods from grocery stores. One could add that the program fits into a multi-network interest in “white trash spectacle,” including CMT’s My Big Redneck Wedding and Redneck Island, Animal Planet’s Hillbilly Handfishin’, MTV’s Teen Mom and The Jersey Shore, and TLC’s own My Big Fat Gypsy Wedding.

[youtube]http://www.youtube.com/watch?v=WCEsvWXnfEw[/youtube]
Alana a.k.a. Honey Boo Boo Child introduces herself on Toddlers and Tiaras

Several media outlets have discussed the class politics of the show, particularly how the program manufactures a white trash circus in which the assumed white spectator assumes his/her “good white” status through deriding spectacles of “bad whiteness.” Indeed, this recalls the rhetorical function of the traditional Victorian freakshow, which Rosemarie Garland Thompson claims formed “a public ritual that bonded a sundering polity together in the collective act of looking.”1

Glitzy the Pig
This derisive gaze is a useful starting point in unpacking the problematic nature of TLC’s program. More troublesome, though, are the tacit links that the program makes between its rural subjects and livestock, particularly pigs. Indeed, the freakshow aesthetic relies heavily upon subjects who suggest ambiguity, often seeming to exist in the liminal space between human and inhuman. In her application of Michel Bakhtin’s “carnivalesque,” Kathleen Rowe discusses the figure of Ursula the Pig Woman from Bartholomew Fair—the embodiment of excess, filth, corpulence, and gluttony. 2

In Here Comes Honey Boo Boo, the show begins with a traditionally posed family photo that is interrupted by Mama’s eruption of flatulence. This preoccupation with bodily functions continues throughout the series, as Mama suggests that farting 12 to 15 times a day helps her lose weight. Later an entire episode entitled “She Oooo’ed Herself” will be devoted to the inappropriate release of excrement. In wallowing in flatulence and shit, Honey Boo Boo and her family are associated from the outset with Bakhtin might refer to as “bodily lower stratums.” 3 At the “Redneck Games,” the young daughters compete in the “mud pit belly flop,” and the program will continue to associate the family with grime, filth, and animals that wallow in the mud. 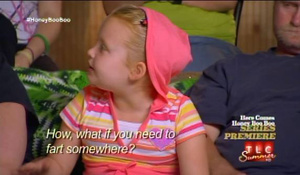 So, too, does the program obsess over the excessiveness of the female body. In introducing her family, Honey Boo Boo says, “This is my crazy family! I have three sisters, Pumpkin the craziest, Chickadee the pregnantest, and Jessica (known as “Chubbs”) my favoritest, my BFF.” Nearly every episode is devoted to the spectacle of Mama’s excessive pig woman body, dwelling especially on her gluttony and her inability to lose weight along with her daughter Chubbs. Scenes of Mama weighing in and overwhelming the scale are underscored by muffled tuba music, meant to mimic the corpulence of her body and to queue the spectator into his/her intended affective relationship to this moment. Mama also obsesses over her ugly “hooves,” which have been damaged in an accident, and whose later display is meant to evoke more disgust at the grotesquery of her body. 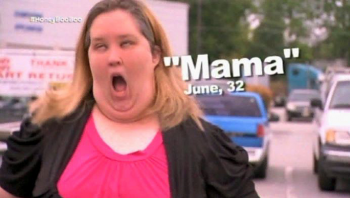 “Mama” and her unruly body

To make the point even more apparent, the producers introduce a pig named Glitzy as a pet into the family in episode two. That episode, “Gonna Be a Glitz Pig,” makes a fairly tacit connection between Alana-as-beauty-queen and Alana-as-pig (“Glitz” being the name of the pageant that Alana is entering that month) as Alana dresses the pig up like a miniature version of herself. The overt slippage of identity in the episode’s title denotates what the program otherwise suggests through association: that Honey Boo Boo and her family are indistinguishable from swine.

Oh, and at the Redneck Games, the family competes for fame and glory by bobbing in a water tank for—what else? Pig feet.

Honey Boo Boo as Failed Object
Indeed, the program as a whole seems to be conceived a snide narration of the joke that one “can put lipstick on a pig,” but it will always be just that—a pig. Perhaps this aggressive joke is why the show minimizes Honey Boo Boo’s time competing in pageants (less then three minutes per episode) and dwells on her attempts to “put lipstick on” her boorish ways. The backwoods setting of the show (B-roll shows the southern flag, railroads, stray dogs, Walmart) is designed to contrast with the hyperpermativity of the pageant world (glitz, artificiality, expensive clothing). The mobilization of this binary works to illustrate how white trashness is incompatible with pageanty, civility, and humanity. In episode four, the family hires an etiquette coach to educate Honey Boo Boo and her sister Pumpkin after Honey Boo Boo received a competition note that she was not refined and feminine enough. Unsurprisingly, the episode deals with the inability of the girls to adopt any mores of bourgeois culture, particularly as the table manners lesson was interrupted by flatulence and profanity. In her work on the grotesque female body, Rowe notes that “in bourgeois culture, the pig came to represent boorishness, bad manners, and other violations of taste, as in Lewis Caroll’s Alice’s Adventures in Wonderland, where Alice scolds the Duchess’s grunting ‘baby’ for improper manners.” 4

In the first episode, Alana proclaims “I am Honey Boo Boo Child and I am a pageant queen super star!” This is another of the program’s contradictions. Alana does not have her own show because she is a pageant superstar—far from it. By the show’s own admission, she has never won a pageant crown or placed above third. The show rarely spends more than five minutes per episode on the pageant circle itself—rather the focus in on the preparation and eventual failure of Alana to live up to the classed aspirations of the enterprise. Ultimately, the show is a chronicle of a lower class girl who attempts to ascend through the acquision of language and proper etiquette. But this is No Fair Lady: this is Pigmalion. The truly insidious part of the show—and there are many to choose from—is not the construction of a freakshow aesthetic where the audience solidify their status as “good white” subjects. Nor is it even that the show equates its rural subjects to animals who wallow in their own filth.

No, the worst part of the program is that it desperately wants Alana to fail. When Honey Boo Boo recites her catch phrase “A dolla make me holla!” like a pre-loaded Chatty Cathy doll, we are provided with a summation of the show’s representative economy. The program demands that she holler, more appropriately, squeal—loudly, boorishly, trashily—for our entertainment. And for that, she secures her place as a white trash diva child and in turn secures her (family’s) paycheck. But to be a success at this show, she must be a failure at pageantry, at femininity, at whiteness, and at humanity.