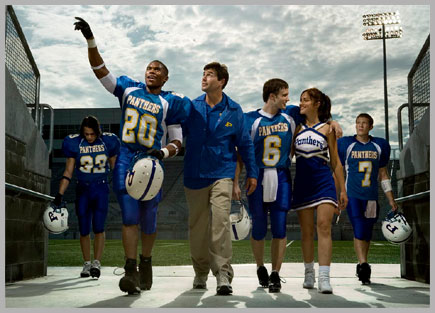 I need to include an obligatory “spoiler alert” here, since the odd screening schedule of Friday Night Lights (2004-2011) has created a divide between those who have DirecTV (on which the show recently finished its last season) and those who do not (for whom the show’s last season will air on NBC beginning April 15).

This column will probably be equal parts appreciation, critical analysis and eulogy. Saying goodbye to a television show is an odd feeling, particularly because you are saying goodbye to a habit, to a time slot, or, in recent years, to part of a “list” of DVR recordings. The ending of a series also abruptly highlights the fact of television authorship; the continuous experience of a series returning from week to week or season to season perhaps allows viewers indulge in the idea that the series just exists, unending, in some dream-like television database. Friday Night Lights’ primary stylistic feature – the use of documentary-style camerawork – perhaps encouraged the idea that the world of Dillon, Texas would somehow continue week to week, indefinitely. The show did have its own stops and starts, as its future was up in the air after both the first season and the writer’s strike in 2007-2008, leading to premature season finales that tried to awkwardly tie up narrative ends.1 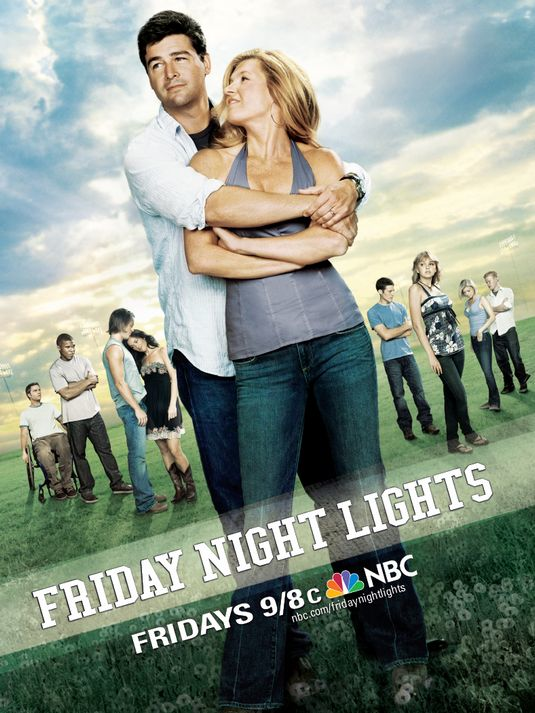 Focusing on the Taylor family

On the subject of continuity, FNL faced the problem that most high school teen dramas face at some point in their run – the fact that their protagonists eventually graduate – but managed to circumvent the awkward transition from adolescence to adulthood (that shows like Beverly Hills 90210 (1990-2000) and Saved by the Bell (1989-1993) clumsily tried to address) with a focus on Coach Eric Taylor (Kyle Chandler) and his family. Perhaps the show’s greatest contribution to the television landscape was a nuanced and developed focus on rural, working-class Americans; the sense of being dropped into a small Texas town was consistently underscored by the show’s commitment to location shooting.2 The characters’ occupations (football coach, high school principal, waitress, nurse, police officer), the modest houses, an open and unflinching attitude towards financial problems – these were the show’s primary markers of its working-class to middle-class milieu.

Then, of course, there was the football, which also helped the show maintain narrative continuity from season to season and contributed, along with the camerawork and location shooting, to a carefully constructed sense of authenticity around the lives of small town Texas residents. The focus on one high school football team (in seasons 1-3, the Panthers, and in seasons 4-5, the East Dillon Lions) fed seamlessly into the series’ alternation of interpersonal, melodramatic storylines; whether rooting for the team, its player or its coach, we as audience members never really suffered from any conflicts of interest. The football itself was filmed in the same documentary realist style as the rest of the show, highlighting the essential moments of each game with familiar conventions – shots of the scoreboard, close-ups of brutal tackles, the sounds of referee whistles and crowds cheering, and glimpses of Coach Taylor’s tense expressions.3 From my own personal sports-watching standpoint, this was the ideal distillation of the essential moments of football into easily digestible melodramatic nuggets. As my partner and I would watch episodes together, I would often think about the show’s gendered address – why would my sports-obsessed partner agree to watch a teen melodrama with me? Did he see it as nighttime melodrama or sports-themed drama? Did the documentary style somehow mitigate the show’s deep investment in the dynamics of heterosexual courtship and teenage angst? Was the football authentic enough to anchor his identification? Whatever the case, our viewing pleasures overlapped enough to keep us together in front of the television from week to week. 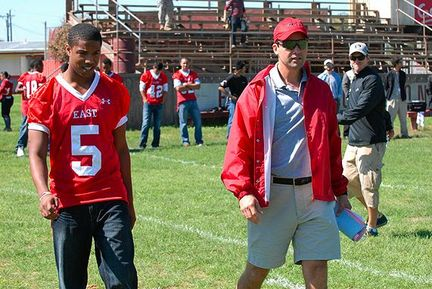 In comparison to the show’s nuanced and sensitive portrayal of Coach and Tami Taylor’s (Connie Britton) marriage, the black characters come mainly from broken homes. After the exit of Smash Williams, the show’s main black protagonist is Vince Howard (Michael B. Jordan), who Coach scoops up from the nasty crime-ridden streets of East Dillon and turns into the team’s star quarterback. Howard’s mother (Angela Rawna) is a heroin addict, but her son’s new leaf prompts her to get clean and find steady work, and when his ex-con father (Cress Williams) enters the picture in Season 5, the Howard family gets a sweet glimpse of what “normal” family life is like. But Mr. Howard can only stay away from crime for a few episodes, and it is the demonization of the black father in season 5 that really made me cringe. For both Smash Williams and Vince Howard, Coach Taylor serves as substitute white father, and with the addition of Mr. Howard’s unreliable and unstable black father character in Season 5, the show truly asserts its conservative nature and what George Lipsitz would call its “possessive investment in whiteness.” Lipsitz argues that Americans are encouraged to “invest” in whiteness, both in terms of capital and ideology; on a narrative level, the success of the town, its minority population, and its football players depends on the particular brand of conservative white patriarchy that Taylor represents.4 On the level of production and television markets, the financial viability on the show, particularly with the increased racial diversity of the fourth and fifth seasons, depends on the white family at its center to carry it through an already whitewashed television landscape.

I felt increasingly uncomfortable as the last season went on, particularly as Vince Howard’s character suffered under the influence of his black father and only improved under the explicit guidance of Coach Taylor. Camera angles and positions, as well as specific edits and cuts, privileged the relationship between Taylor and Howard as symbolic of the series’ main narrative throughline – not only that sports are a microcosm of life but also that white male leadership is a clean and effective remedy to interpersonal, political and racial dramas. The Taylors eventually move to Philadelphia, and in one of the last shots, the camera pans slowly over black high school football players’ faces, listening raptly, as Coach spouts his various aphorisms. You can take the man out of Texas, but not Texas – or dominant white masculine ideology – out of the man; you can take a show off the air, but it’s hard to forget the ambivalence that it leaves behind.