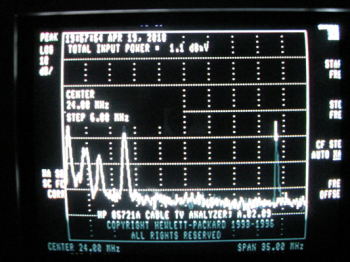 At some point in the last few months, a new kind of place appeared in the economic order of my television set. I didn’t see it at first. One of my graduate students was the first to ask me—with a distinct air of suspicion—if I had noticed anything unusual on channel 33.1 But when I checked, it didn’t show up on the set that I scan most intimately and exhaustively: the one that opens up my living room to a glorious horizon of digital plenitude. In fact, I couldn’t see it at all until I turned on the smaller, older television set that I watch as I drift into and out of sleep in my bedroom. Then it appeared in all its promised splendor: in the place where ESPN Classic had once opened up a portal to the nation’s heroic past, there appeared instead a DOS-based graph—looking like a relic of the seventies in its own right—that declared itself “HP 85721A CABLE TV ANALYZER A.02.09.” 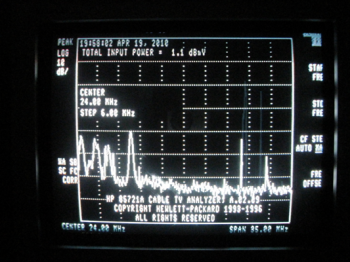 The technological anachronism notwithstanding, this graph turned out to register a very different temporal order than its nostalgic predecessor. Indeed, the top-left corner of the black-and-white screen displayed the proper day’s date and a real-time clock counting the seconds, while the top of the screen marked out the “total input power” of the cable signal at my house. And underneath, the coup de grace: a live graph of the “total” signal frequency that spurted, condensed, and leapt across the entire “span” of the spectrum, mapping out a constant state of electronic agitation. I will not mince words: channel 33 had become the very picture of televisual presence. ESPN Classic—like the glorious past it had summoned—would be gone for good.

There is of course nothing inherently strange about the disappearance of a cable channel—especially in service areas like Stillwater, Oklahoma, where one provider holds a monopoly and can change the lineup of channels with impunity. But it is not every day that one turns on the television to find a real-time graph of cable television’s quivering liveness; I have never seen one anyhow. Cable providers typically deal with the elimination of a channel in one of a few ways: they insert another channel, conceal the gap by eliminating the un-programmed channel from the channel-flipping flow, or simply allow the blue screen of an electronic void to cast a chromatic reproval upon customers too cheap to upgrade their package. Of these standard solutions, the introduction of the cable TV analyzer channel most resembles the last. After all, I didn’t see it at first because the digital tuner connected to my main television does not show it. When channel 33 disappeared from its lineup, it was quietly eliminated from the numerical flow of the channels one traversed in moving up and down the broader band, as per the second solution. To click on channel 33 was to land on either channel 32 or channel 34; the onscreen channel guide made this same causal elision. Channel 33 simply ceased to exist as a place on the spectrum for digital customers, most of which already knew that ESPN Classic was also available at a more upscale version of this same location on the spectrum: channel 133. 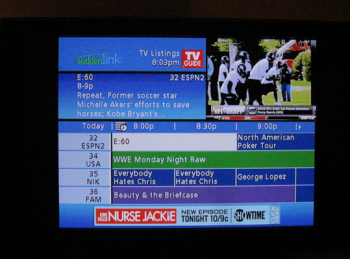 There is no Channel 33

In other words, SuddenLink attended to the aesthetic preservation of flow in its broadband programming economy—and the experience of plenitude that it makes to digital customers—as if it were touching up a vagrant’s attempt to deface the Mona Lisa. But for customers still clinging to their old analog sets or their basic cable budgets, it provided the closest thing possible to an aesthetic presentation of the plenitude lost on their outmoded technology. That is, the company did not simply refuse to cover up the gap in the flow of channels available, and it did not simply confront analog recidivists with the aesthetic guarantor of that flow’s absence: a chroma-key blue screen signifying the hole that had opened up in the economy of channels. A fortiori, it provided a display manifesting this technological outmodedness in its own primitive aesthetic, and doing so for the eminently “practical” purpose of providing a diagnostic read-out on the impending expiration of the technology itself. Like most diagnoses, though, this one inevitably participates in effecting the outcome that it promises to merely predict: it is an EKG for another era’s liveness that anxiously assures this expiration in advance by making the potential of the signal to flat-line at any given moment a permanent fixture of the pre-digital programming economy.

As the terms that inflect this entire account already suggest, the canonical television studies scholarship on both “liveness” and “flow” offers indispensible resources for explaining how the economic imperatives of the television industry might profit from this unusual display of its technological capacities, and why the display itself might cultivate a sense of anxiety in the spectator to this end.2 And yet, as I have tried to suggest in my two previous columns, shifting these terms into the theoretical vocabulary of post-Heideggerian political thought opens up new ways of thinking about the economic basis for these familiar tropes of televisual presence; new ways of thinking about the relation between ontology and technology that has codified around them; and new ways of approaching the hegemonic nature of this relation at the level of methodology. Along these very lines, we might consider how strongly the account of the cable television analyzer laid out above—and more precisely, its position in relation to the technological economies of television programming—resonates with Ernest Laclau’s well-known account of the empty signifier. As Laclau explains at much greater length in the 1996 Emancipation(s), an empty signifier is one that points “from within the process of signification, to the discursive presence of its own limits.”3 It can perform this impossible task because it effaces the particularity of its own particular significance in the differential order that defines signification as such, emphasizing instead the equivalences of its signifying potential, and in doing so, “assum[ing] the role of representing the pure being of the system—or rather, the system as pure Being.”4 A full explanation of the empty signifier is of course beyond the scope of this essay. But suffice it to say that Laclau defines this set of discursive relations as the logic of hegemony itself, whereby a particular signifier assumes the function of representing a universal meaning that fundamentally exceeds it and does not exist otherwise. And as Laclau insists, the ontological force of this hegemonic set of relations derives precisely from the aesthetic economization through which it establishes signification as a system—not from any “last instance” of economic relations per se.

With this premise in mind, we might think of the appearance of the cable TV analyzer on channel 33 in similar terms. After all, it presents us with the image of a frequency equalizer rather than an image of any particular channel in the economy of cable programming, and in doing so, it points to the plenitude that lies beyond the hegemonic limits of this system precisely in the act of constituting this system as an economy that is aesthetic and financial at once. Put otherwise, the cable TV analyzer makes the absence of a particular signal—ESPN Classic—present by presenting the presence of the signal in general in the empty space it has left behind. Of course, to think of the cable TV analyzer in this way is to think of the apparatus of television in rather different terms than we might think of it in the Althusserian theoretical economy which largely informs our existing discussions of television technology. For it reminds us that the television screen itself functions in a similar way regardless of any one technological incarnation of its “essence,” even when it conceals the economic limits of its order in the constant flow of images, channels, and programs that pass across its surface, as it does in the digital programming economy described above.5 Or rather, it reminds us that if the aesthetic affect of televisual flow evokes its own experience of the medium’s “pure Being” or presence, it is only because it too defuses the power of any one image, channel, program, or technology to exhaust the specificity that the screen itself signifies—not because it defines the “essence” of some originary notion of television technology.

At the same time, this scenario reminds us that if the aesthetic experience of rupture associated with “live” crisis coverage often marks out an affective crisis in the ontological economy of television representation, it is only because such crises temporarily fix the hegemonic significance of the world that television—in the broadcast era and the post-broadcast era alike—otherwise promises to scan indeterminately. Simply put, to think of the cable television analyzer as an empty signifier requires that we think in turn of the entire ontological discourse surrounding television as something more complicated than a delusion of technological essentialism—something that cannot be completely “demystified” through materialist histories of production relations and reception studies, and neatly dispensed with as mere ideology. Insofar as it reminds us that the economic basis on which television’s ontological discourse relies is aesthetic first and foremost, it reminds us that the medium also constitutes the material relations of its industrial, political, technological, and territorial economies on the ontological grounds of this aesthetic economy. And in this much, it reminds us that understanding the complex role television new and old plays in the production of our social and political existence will require something more than sensitivity to the myriad differences that ultimately define the medium’s specificity in an infinite number of material institutions and practices—as crucial as this mode of research may be. For unless we accept the accumulation of these differential specificities as the medium’s promise of yet another plenitude that we cannot hope to represent, and must thus defer indefinitely, it requires that we indulge in a hegemonic crisis of our own: we must reconsider the distinctly Althusserian theoretical foundations on which the field is built as such, as well as the questions, terms, and methodologies it has allowed us to take for granted for so many years.