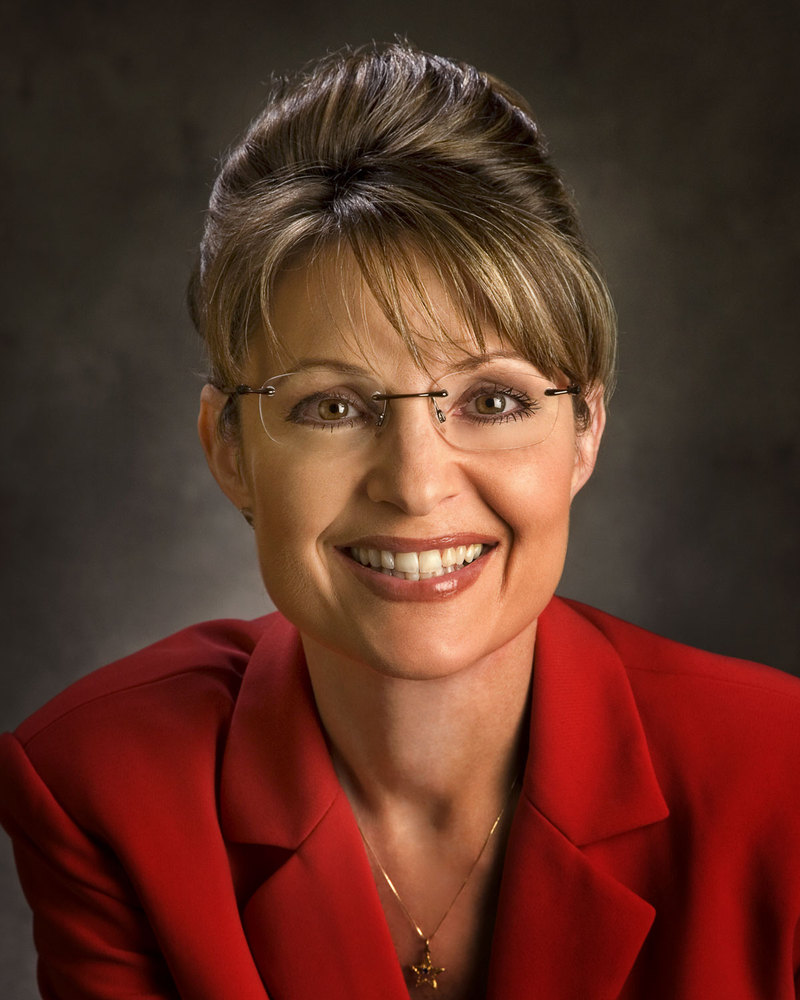 ‘A race that began as The West Wing now looks alarmingly like Desperate Housewives,’ wrote UK journalist Jonathan Freedland (Freedland 27).1 Never a truer word has been spoken. Every day more revelations about Sarah Palin appear in the British press – of a son deployed in Iraq, another with Down’s Syndrome, a 17-year-old pregnant daughter (and of a wedding hastily being arranged), to say nothing of ‘troopergate’ as well as rumours of a fake pregnancy and a son that is really her grandson; and then, of course, there are her politics – the family values, her faith, her adamantly pro-life, pro-guns and anti-gay marriage stances. It does indeed seem as if Bree Hodge has stepped out of the glossy Wisteria Lane mis-en-scène and into the glaring media spotlight of US political celebrity; and like Bree, Palin visually presents a model of self-composure and self-determinism in spite of the chaos encircling her life. Or, so the script appears.

Leaving aside the sudsy shenanigans it does appear as if the media have been left stumbling over exactly how to cover the 44-year-old, mother-of-five, governor of Alaska. The reason I propose here lies with her media image as representing a feminine ideal, which is compelling enough to psychically entangle us and from which we are not entirely able to free ourselves. Intoxicatingly presented, persuasively offered as saying something important about female accomplishment, her image is embedded in and through dominant norms defining the feminine self, her body (slender, attractive, youthful – and not forgetting that trademark smile), her lifestyle choices (wife, ‘hockey mom’, working mother). Never mind those lurid headlines, or that she cannot help but polarise the US electorate with her political beliefs, she looks perfect.

‘My feelings about Palin have everything to do with her gender’, writes Rebecca Traister. 2 I couldn’t have put it better myself. Like Traister I find myself ‘tied in knots’.3 When we talk of Palin we cannot seem to stop talking about her gender – her procreative abilities, her reproduction choices, her mothering, her children, and of course, her appearance; and it is for these reasons that she so seductively embodies, what Traister describes as, ‘a form of feminine power that is utterly digestible’ .((ibid)) This ‘power’ I would argue is not merely about party politics, but it is nonetheless a profoundly political issue. It is ‘utterly digestible’ because her representation exacts a powerful normalising hold over us, shaped and ‘inscribed’ as it is with the imprint of prevailing historical and political forms of discursive power that manage and animate our perception and experience of what the ‘correct’ female body should look like. What I am suggesting is that while we know that what she represents is a constructed ideal, and while we understand what her representation is doing, we still compulsively pursue that ideal as something that truly matters. 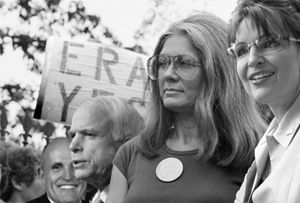 This discourse of the feminine ideal as body stands up well, due undoubtedly to how simple it is to sustain. For, in Michel Foucault’s words, ‘a solemn historical and political guarantee protects it’. 4 But as he later describes, power endlessly shifts, constantly generating new forms of subjectivity. Power is never stable; resistance is everywhere. Palin’s political fortunes may be intimately tied to her gender (in particular, to her motherhood), but, and what intrigues me here, it is how those traditional gendered norms that she represents absorb dissent and are being modified as a consequence. It is for this reason that I think she proves so infuriating for political pundits to critique, but is why her constituency like what they see (and quite literally, if reports about her optician being inundated with orders for those designer glasses are to be believed).

Nowhere is this paradox more self evident than in how Palin represents so seductively ‘the personal is political’. As Foucault tells us, dominant norms (institutions, culture) are perpetually being resisted and reconstituted by knowledge that has developed and gained momentum from elsewhere ‘in the power network’.5 Under the guise of female empowerment, the Palin image is saturated in the political means of her personal life, mangling the vocabularies of Conservative populism (anti-contraception, anti-abortion) with feminism (equality, balancing family life with ambitious careers). Her representation, embracing contradiction, ‘living comfortably with paradox’6 in many ways enters into dialogue with contemporary feminism and its politics of ambiguity – only to stoke the flames of disagreement over how exactly to define your terms when talking about women and power. But in this squabble are we not missing a more crucial point? For, the Palin image operates inside meticulous codes – of marriage sanctified by church and state, of motherhood and of family extolled by popular media rhetoric. It is a lesson in unseen power whereby biological vigour translates into political energy; and power comes not from party politics (as such), but from ‘that [which] we no longer perceive … as the effect of power that constrains us’.7 No wonder we cannot help but become mesmerized by Palin’s use of her femininity.

‘Who wants to talk about boring policy when we can talk about teens and sex and pregnancy?’ writes Traister.8 She, like many of us, may bemoan how this history-making moment for women has become hijacked by the ‘uterine activity’ ((ibid)) of the Palin family. (Oh, Hillary, it could have all been so different.) But should we really be so surprised that we are talking in this way, adopting such a stance with a woman like Palin who thrives so much better in the mainstream. Let’s face it: she looks good on the front cover of the glossy weeklies that sell such images, such ‘impossible contrivance[s] of perfect womanhood’.9 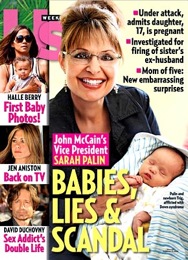 On the Glossy Weeklies

It is where her looks can be discussed in infinitesimal detail, her fashions endlessly critiqued, her status as a mother swooned over. But does that image stand up so well in the broadsheets where only the politics matter? We may know political image is highly choreographed, but the visual of Palin cradling her handicapped baby son in her arms is nonetheless a powerfully emotive one that effectively silences, for better or worse, everyone. 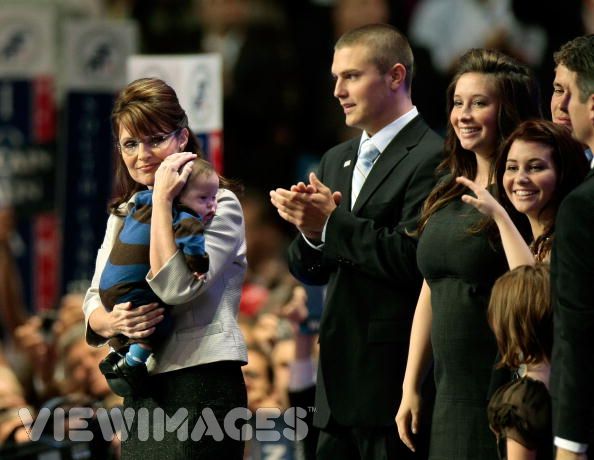 Palin with Baby Trig in Arms

Because she is a woman, and one publicly seen to be combining motherhood with presidential politics, the mainstream press (along with the Democratic campaign team) has shied away from direct criticism. But is the reason merely that no one can afford any semblance of sexism? I would suggest something else. So imbibed are we in this image of the feminine ideal that to critique that script is almost impossible. Disclosing what should not be said, to denounce that ideal of American womanhood that the mass media works so hard to promote and enforce as the norm,10 cannot be done. No wonder the media has found itself perplexed, reduced either to frustrated dismay, spluttering incongruity, saccharine hyperbole or sniping gossip.

As I write this piece news reaches us in the UK that Palin-mania is waning. Forget the row about lipstick. Only the economy matters now. Nevertheless the UK media assesses John McCain’s choice of running mate as a timely reminder that the US isn’t quite done with the culture wars. Indeed are not the social conservative Republican values visibly inscribed across her very body – her handicapped son testimony to her pro-life convictions? Nothing more needs to be said. The visual says it all. Unlike Hillary Clinton whose voice is familiar to us in the UK, Palin is nothing but image. But, surely, isn’t that the point? Her image is far more powerful than anything she could ever possibly say.

Image Credits:
1. The Feminine Ideal?
2. Feminism Meets the Right?
3. On the Glossy Weeklies
4. Palin with Baby Trig in Arms

Author Bio:
Janet McCabe is Research Fellow (TV Drama) at Manchester Metropolitan University, and managing editor of Critical Studies in Television. She is author of Feminist Film Studies (2004), as well as co-editor of several titles on contemporary US television, including Quality TV (2007). She is writing a book on The West Wing.