May 22, 2008 Erin Giannini / University of East Anglia 5 comments
Converging in the Strike Zone: Fan Support and Its Effect (Or Lack Thereof) on the WGA Strike 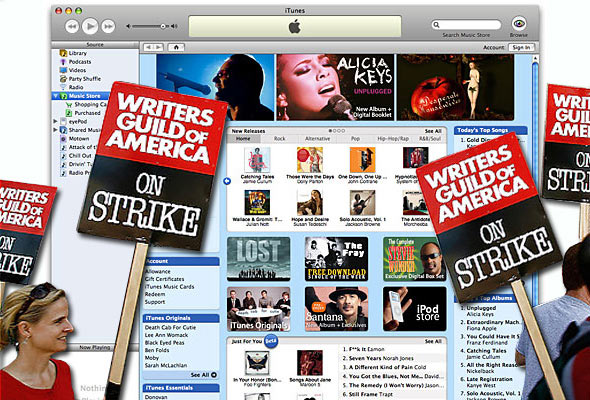 In Convergence Culture: Where Old and New Media Collide, Henry Jenkins discusses how what he terms “knowledge communities” can be utilized in a marketing context, if producers tread carefully.1 Further, he argues that this works both ways: corporate and consumer convergence influence one another. Media corporations spawn their products across multiple delivery channels (TV, Internet, DVD, iPods, etc); consumers use these new technologies to gain power over their media. Not only in terms of viewing processes, but in the communities they create. These communities, as Jenkins discussed in greater depth in Textual Poachers, have always managed to assert some level of re-interpretation and power over the text through the mode of fan-fiction and other fan creations.2 The current model of convergence, however, allows greater interaction between producer and consumer, and helps these consumers influence content. 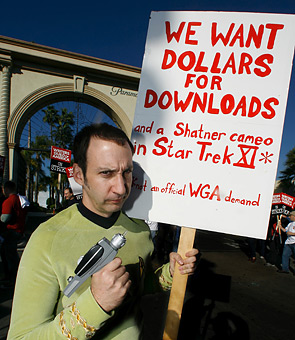 This convergence that allows the fans the ability to “talk” to the producers and creators of these shows allows an impact greater than just registering complaints about new characters or problematic storylines. Fans have mobilized to make their opinions known to producers. In the 21st century, fan campaigns no longer rely solely on written correspondence—now, it is the sending of “things” that fans seem to think will get a studio’s attention, “things” that have a particular correspondence themselves to the televisual story they are supporting. For instance, fans of The 4400 mailed bags of sunflower seeds, while Friday Night Lights fans have sent mini-footballs, light bulbs, and eye drops.3 Yet, barring exceptions such as Jericho, which fans successfully kept on the air for an additional eight episodes after mailing in tons of edible nuts, these campaigns do not have an enviable success rate.

One reason why might be found in Scott Lash and Celia Lury’s analysis of Max Horkheimer and Theodor Adorno’s notions of the Culture Industry. Lash and Lury claim that rather than objects mediating representation and formulating identity, the new global model of the culture industry means that objects take on numerous properties and meanings outside of what the product intended and represent “difference.” It is the difference between the meaning of a commodity and a brand: a commodity is produced; a brand is a producer of meaning. Commodities are alike except in terms of how much they cost, whereas brands seek difference, specialness.4

Broadcast networks have certainly made use of the Internet to “brand” individual shows. All of the broadcast networks in the United States provide online content; some provide full episodes, previews, or web-only episodes (known as “webisodes”), character blogs, or interactive “novels.” However, a workable economic model, either current or predictive, for what the Internet can provide in terms of value-added or actual revenues, has been claimed to not yet exist. The Academy of Motion Picture and Television Producers (AMPTP) were reluctant to commit to a percentage of money from these new technological elements, as they had not yet mined the complete cost-benefit profile of Internet and new media technology. The WGA’s complaints were tied into the strike resolution in 1985, when they agreed to a cut in residuals for the video tape market, to 0.03% of profits; in the current economy, with DVDs, this amounts to about 4 cents per DVD sold.5 They wanted to raise that to 0.06% and include new media, in particular, downloading to unconventional mediums, such as iPods and mobile phones. The AMPTP claimed that web- and new media-based content was promotional and had no profit margin, and turned down the request.6

What sets this strike apart is the presence of the very thing that is at issue: the Internet. The WGA utilized the Internet to mobilize fan communities and garner support among viewers through strike updates, blogging, and posting strike (and corporate exposure) videos on YouTube, and took the media to task for negative portrayals of the striking workers. Joss Whedon used the blog whedonesque.com to provide updates and counteract what he felt was the negative portrayal in venues such as the New York Times, in which they referred to the writer’s strike as having “All the trappings of a union protest …But instead of hard hats and work boots, those at the barricades wore arty glasses and fancy scarves.”7 He responded with:

Oh my God. Arty glasses and fancy scarves. That is so cute! My head is aflame with images of writers in ruffled collars, silk pantaloons and ribbons upon their buckled shoes…The entire writers’ guild as Leslie Howard in The Scarlet Pimpernel. Delicious. Except this is exactly the problem. The easiest tactic is for people to paint writers as namby pamby arty scarfy posers, because it’s what most people think even when we’re not striking… (And Hollywood writers are overpaid, scarf-wearing dainties.) It’s an easy argument to make. And a hard one to dispute.8 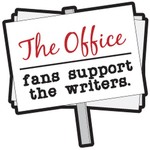 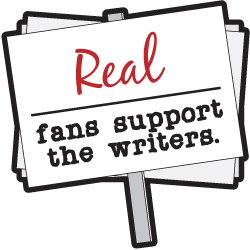 This is certainly an example of convergence in action. It is difficult to measure how much of an influence the fans had on the AMPTP, but show creators and writer-producers thanked fans for their support in winning the public relations war of the strike.9 In the end, however, the real power brokers in this strike were the advertisers; they had the right to ask for their advertising dollars back if the strike persisted; in mid-November 2007, they announced that they would demand their money back before mid-December, as the strike meant that those who have contracted for first-run programs were not, in fact, getting what they paid for.10 There is a debate regarding how much the strike costs, with estimates ranging from $380 million to $1.5 billion.11 Certainly, fan support focused attention on the strike; whether it had a influence, or just gave fans something to do while their favorite shows were off the air, is a negligible conclusion.