The proliferation of screen media has been so swift that many questions remain unanswered. In convergence culture [S]mall, [M]edium, [L]arge and [EX]tra-[L]arge screens all compete for ‘eyeball attention’. The contemporary screenscape is fragmented due to rapid advances in digital compression formats and distribution platforms. What to watch? When to watch it? On which screen? For me, these questions instil a certain level of screen-anxiety.

Focus is often toward the technical ‘quality’ of competing media, such as the mp3 debate in the digital distribution of music. But screen media is a visual medium. And one significant issue, often glossed over, is that of screen size, or scale. The lack of attention paid to the aesthetics of scale sits at odds with its place in the history of the visual arts. Scale remains relevant to the other art forms – the fine arts, architecture and urbanism. Does size matter for screen media? 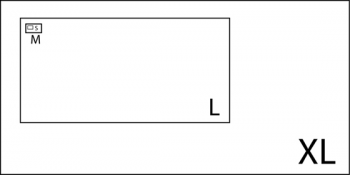 Mobile/Computer Screens Chuck Tyron wrote an interesting Flow column looking at ways in which “the computer appears to be supplanting both the movie screen and the television set”. Tyron points to the first (legally) self-distributed feature film on YouTube: Four-Eyed Monsters. This feature was initially released as a series of 8 video podcast episodes (for computer, PSP or I-Pod consumption). Next, the entire work was uploaded to You Tube in the form of a 71 minute ‘Clip’. The creators of Four-Eyed Monsters (Arin Crumley and Susan Buice) position themselves as Independent filmmakers. The feature has also screened at film festivals and some theatres, through self-distribution. It is available for DVD purchase.

For me, the Four-Eyed Monsters experience unfolds on my laptop screen, in a You Tube screen which measures 11cm x 8cm. I don’t make it through the 71 minutes. My fear is that, with the miniaturisation of new screens, we have discarded a century-plus of film culture which has debated the aesthetic impact of film language, scale and aesthetics: mise-en-scène, camera movement, shot size and duration. Can a feature really shift so effortlessly across scenes? Lev Manovich tells us that a key principle of the New Media is that it can exist “in different, potentially infinite versions” (2001: 36). But surely these multiple versions need to address the notion of scale, if they are to be consumed across the contemporary screenscape?

Widescreen TV The DVD of Bubble (2005), from eclectic and prolific filmmaker Steven Soderburgh, carries the tagline: ‘another Steven Soderburgh Experience’. On January 27, 2006 the feature was simultaneously released in movie theatres and satellite/cable TV (HD Net Movies) with a DVD release on January 31st (Wikipedia). Bubble created controversy by mounting a challenge to the traditional ‘release window’ formula. Some theatres chose to boycott the film as a stance against the ‘cannibalisation’ of their product. In Wired , Soderburgh predicts “it will be a while before bigger movies go out in all formats; in five years, everything will.” 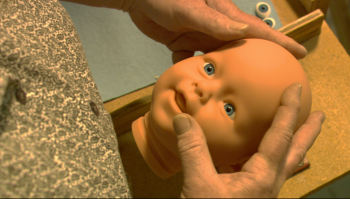 I purchased Bubble from Amazon and watched it on my 40-inch Sony Bravia (HD) LCD television screen. The film was shot with the expensive HD cameras which Lucas used for Revenge of the Sith. For Bubble, Soderburgh opts for a entirely different digital aesthetic than the gaudy VFX of the Star Wars prequels. He speaks about a ‘digital stillness’ in digital cinematography (no film runs through the camera) and opts for static, tableaux shots, wide-angle lenses and significant colour grading (in post). With the HD format (1920×1080 pixels) there is an ‘easy’ equivalence between the camera and the HD widescreen television. But Bubble works against this, by eschewing the 16:9 ratio for a more ‘cinematic’ theatrical ratio. The film looks and sounds great on the Bravia.

For Soderburgh, the cinema remains “the number one destination” (Wired) His ‘design’ for Bubble provides a feature film which will work across screen scale at the Medium/Large end. Soderburgh also provides a refreshing take on the idea of multiple versions of feature films across screen platforms. He advocates a mix/mash-up aesthetic:

“I’d like to do multiple versions of the same film. I often do very radical cuts of my own films just to experiment, shake things up, and see if anything comes of it. I think it would be really interesting to have a movie out in release and then, just a few weeks later say, “Here’s version 2.0, recut, rescored.” The other version is still out there – people can see either or both. For instance, right now I know I could do two very different versions of The Good German. (Wired)

Theatrical 2D The battle of the screens in the1950s is well documented. A series of widescreen formats, such as Cinerama (2.8:1), were engineered by the studios in a climate of panic. Today, the fear is back. In Australia, Village Cinemas use the catchphrase: ‘See it Bigger, See it Better, See it First: Only at the Movies’. This is a footnote to movie poster advertising for new theatrical releases. It runs on television, newspapers and is planted on buses and billboards around the city.

In order to keep their promise to the theatre chains, Hollywood (arguably ‘Post-Classical’ Hollywood) is also fighting back. Recent Blockbuster cinema reveals an amplification of classical Hollywood narration: in terms of duration (features are getting longer and longer) and in terms of scale. The latest Bond film Casino Royale (2006) provides a good example. An early scene involves a foot chase through a building site in Madagascar. It lasts almost 10 minutes. The scene is a live-action sequence performed by Sébastien Foucan, founder of ‘free-running’. It displays a hyperkinetic aesthetic, marked by rapid cutting and fluid, mobile cinematography. I saw Royale on the cinema screen and (for this part of the film) was convinced by the ‘Bigger…Better’ mantra.

Mission Impossible III (2006) (the best one by far) also presents an interesting case. Writer/director J.J. Abrams was head-hunted by Tom Cruise after seeing Alias on DVD. With his strong background in television production, Abrams brought a new aesthetic to the Mission franchise. The film starts in Close Up (CU). Abrams cuts between handheld CUs of the protagonist Ethan Hunt (Tom Cruise) and the villain Owen Davian (Philip Seymour Hoffman). This presents a ‘mutation’ of the television aesthetic on the big screen. It makes for a thrilling start, helped by the riveting performance by Seymour Hoffman. 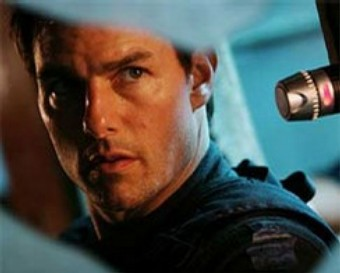 Theatrical 3D Avatar (2009) is the forthcoming Blockbuster from James Cameron, his first feature since Titanic (1997). The claim is that Avatar “will test new technologies on a scale unseen before in Hollywood”; Cameron describes the project as “a true hybrid – a full live-action shoot, with C.G. characters in C.G. and live environments.”

(See Entourage for a parody of Avatar as ‘Aquaman’: James Cameron plays himself in an amusing cameo). 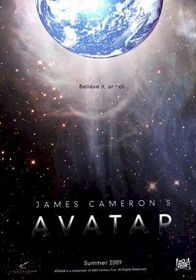 Cameron’s ambition is to create a ‘next-generation’ experience which will stand alongside 2001: A Space Odyssey (1968) and Star Wars (1977). The cinematic scale of Avatar is reflected by its budget of around $200 million (USD). This makes the studios nervous, who are already hyping the film. Jim Gianopulos (co-chairman of Fox) says:

‘This will launch an entire new way of seeing and exhibiting movies…once again Jim is transforming the medium. Jim’s not just a filmmaker; every one of his films have pushed the envelope, in its aesthetic and in technology…”

Big claims for a big film. But given the shaky history of 3D in the cinema, I would be nervous too.

The notion of scale in contemporary screen media is significant in a culture of convergence and excess. Heterogeneity of platforms and formats exists: from micro-screens of mobile media to new 3D digital theatrical projection. But beyond the hype, the formal and aesthetic implications of scale should be addressed. This is not to prioritise any historical or conservative notion of scale but rather to promote those creative, messy juxtapositions in screen culture: towards an adaptation, amplification, collision and mutation of screens.

The title to this column was lifted from Rem Koolhaas’ wonderful ‘novel’ on architecture S, M, L, XL.