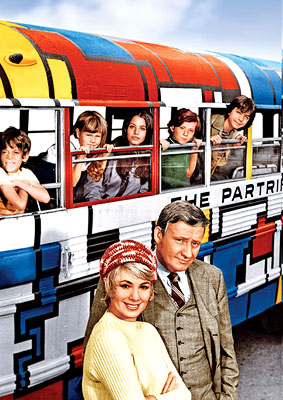 Perhaps no program fulfilled what Richard Dyer has called the “utopian promise of entertainment” for its time more than The Partridge Family. A half-hour generic hybrid of the backstage musical and the family sitcom, loosely based on the real-life singing family The Cowsills, The Partridge Family aired on ABC on Friday nights from 1970 to 73, and on Saturday nights from 1973-74. Unlike its frequent lead-in show, The Brady Bunch, which never broke the top 30 in its original run, The Partridge Family was a top 20 program and gave birth to a huge national star, teen singing sensation David Cassidy. While memories of the show invariably focus on Cassidy and the teenage girls who screamed for him (and a remarkable outpouring it was), the release of the show’s first season on DVD offers an opportunity to reflect on the program as a whole. Much more than the Bradys, who became much more popular in syndication, the Partridges were of their time. The Partridge Family balanced countercultural and traditional values, offering all sides in the nascent culture wars the fantasy of a community brought together through song that was incredibly appealing. The program crossed generations as families watched together; 38% of viewers were children, 15% teenagers 28% women over 19, 19% adult men. Watching the first season has made me appreciate all over again the way in which the Partridges used bubblegum pop music as both a balm and an inspiration for a tense, divided society. It’s the best kind of fantasy entertainment because the program doesn’t ignore the cultural tensions of the time or suggest that they don’t exist. Rather, The Partridge Family explicitly foregrounds social problems, tying the characters to the historical context of the 1970s but suggesting that music can, if only temporarily, make things better and offer hope for the future.

As a proto-cultural studies child, I infinitely preferred the world of the Partridges to that of the Bradys. First of all, the Partridges offer a functional alternative to the traditional nuclear family, in which women are the main sources of strength. Shirley Partridge (played by the wonderful Shirley Jones, who had turned down the role of Carol Brady) is a pragmatic single mother, whose husband has conveniently died before the pilot opens. The lack of a patriarch is never a problem, and dead dad is never spoken of or missed by any of the five children. Moreover, the children look nothing alike, and it is easy to fantasize, as a friend of mine did, that the children have multiple fathers. Elder son Keith (David Cassidy) is the dreamy-eyed crooner, while elder daughter Laurie (Susan Dey) is the serious social activist, my first feminist model and one of the first portrayals of a self-identified feminist on narrative television. Precocious middle son Danny (Danny Bonaduce) is the resident smart-aleck younger brother and comic foil, the conservative minority in a household of liberals (the two youngest children are seen but happily largely unheard). Even manager Reuben Kincaid is far too ineffectual to have any real authority, and functions primarily as comic relief. In the Partridge family, feminine social values of cooperation are foregrounded; decisions are made democratically, and children are given an extraordinary amount of freedom to manage their lives and make their own mistakes.

The lack of nuclear insularity also gives the Partridges more freedom to be socially aware and involved. Unlike the Bradys, who live in some nameless generic white suburb outside of LA, the Partridges seem to really live in San Pueblo, their fictional northern California town (suspiciously close to Berkeley!). They are part of a larger community of people, rather than sealed off into a smothering little Freudian bubble. The Partridges frequently walk through downtown streets, and constantly interact with a variety of community members, including neighbors, school staff, business people, police, protestors, and audience members. The demographics of the community mirror the demographics of a Northern California town with its mix of different classes, ethnicities, races and religions. The liberal producer of the program, Bernard Slade, also created the Catholic/Jewish sitcom Bridget loves Bernie and was known for foregrounding social difference within his programs (often with controversial results, but not here).

The Partridge’s professional status as traveling musicians also gives them unusual mobility for a family “situation” comedy, which has traditionally focused on the home environment. Even the Brady’s take to the road only for family vacations, but the Partridges often tour across the country, interacting with a variety of people and, in so doing, encountering many in need of help. The first season focuses on the adventures of the family’s first cross-country tour, which gets them out of San Pueblo and takes them (sometimes literally and sometimes on the Hollywood back lot) to Hollywood, Las Vegas, Albuquerque, Detroit, and a federal penitentiary. As Laurie’s extraordinary assertion in the pilot suggests, traveling does indeed offer the family “a good way to find out exactly what’s wrong with this country!” On the road, they become enmeshed in a labor strike at their hotel, pick up a young female hitchhiker and help her renegotiate her custody arrangements, and help African-American inner city Detroit residents (headed by Richard Pryor and Lou Gossett, Jr!) save their community nightclub, even attempting to adapt their musical sound to better suit the tastes of the community (the result is more pop-“African” than soul). This last episode shows both the strengths and limitations of the program. Shirley’s attitude toward Gossett and Pryor can only be termed maternalistic, and the Partridges are clearly the protagonists; they come into this neighborhood and save the day (in family fashion, by organizing a block party). Nevertheless, the sense of cross-cultural solidarity and empathy with the communities of troubled people they encounter is remarkable, and perhaps best summed up in Shirley Partridge’s assertion at a prison benefit: “I can’t imagine what it’s like to be a convict, but I think in some real way, we’re all prisoners.” 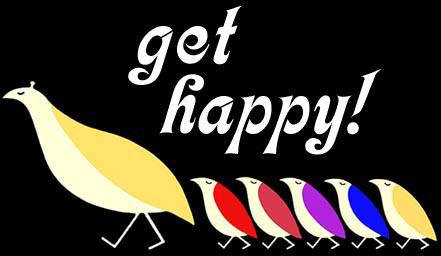 The Partridge’s family problems are also a reflection of their social context. While The Brady Bunch focuses almost exclusively on problems within the family that are personal and psychological in nature (Jan is jealous of Marcia, Greg’s ego is too big), the Partridges’ problems are more often refractions of larger social issues: how to address the problem of teenage runaways, how to cope with social disapproval from conservative neighbors, how to get through the military’s ridiculous red-tape, how to draw attention to the poor living conditions on reservations, how to help solve the energy crisis, how to cope with an intruder (no need to call the police!). The extended family is also addressed in several episodes devoted to Shirley’s father’s fears about being no longer relevant to society (another ineffectual patriarch). While The Partridge Family addresses the requisite teenage traumas (dating, braces, overnight fame), it does so in a way that always ties the public with the private, making the child aware of the way in which his/her troubles occur within an extended family and larger community context. The public status of the Partridges facilitates this continual consciousness about themselves as family participants and community citizens as well as individuals, and encourages a sense of shared social responsibility. Laurie copes with her embarrassment at having to wear braces because the family needs her to perform; Keith’s relationship with a young feminist results in his committing the family to performing at a feminist rally, resulting in community controversy. Dating and school problems are invariably framed by current sexual politics, where equal rights triumphs and male chauvinism is explicitly rebuked.

While The Partridge Family offers good-hearted if unsophisticated solutions to social conflicts, its primary comfort is a musical one – the ability of popular love songs to bring communities together and offer a sense of, in Dyer’s phrase, “what utopia would feel like rather than how it would be organized.” (Dyer, Entertainment and Utopia, 20). The feeling of well-being that the family’s smiling faces and Keith’s enthusiastic crooning conveys are all the more pleasurable and meaningful because of the way in which the program situates its musical healing explicitly within a divided social context. The best example of this from the first season is “My Son, the Feminist” (mentioned above) in which the Partridges perform at a “POW” (Power of Women) rally. After they agree to appear, Shirley is attacked by a group of “Moral Watchdogs” (Phyllis Schlaflys-lite), who threaten to ostracize her from the community, enraging her. At the rally, Keith performs the show’s biggest hit “I Think I love You,” soothing the hurt feelings of his feminist girlfriend and winning over half of the Moral Watchdogs, who have shown up to protest: “Believe Me/I Only Want to Make You Happy,” croons David/Keith. And he does. In this context, what is apolitical and escapist music becomes more resonant because of its attachment to social issues and its function as a mediator, alleviating the tensions created by the narrative and offering hope for community consensus. In these moments, the personal is indeed political as the diverse citizenry, inspired by the Partridge’s, also unites and harmonizes together. The Partridge Family, through blissful music and sheer good will, makes such reconciliation possible.