New to You?: NBC’s The Office and the Remake of a Cult British Hit TV Series 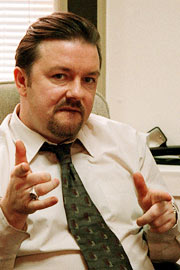 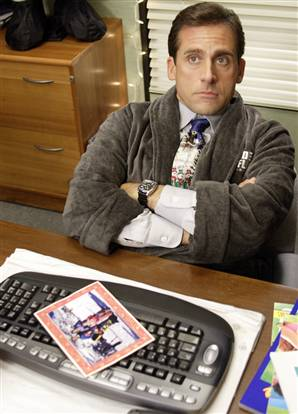 When I first heard that there was going to be a US remake of The Office, I thought about the various ways in which NBC would get its version of The Office all wrong — as if any US television executive was going to understand what is funny about David Brent with so many of them being David Brent-like themselves. How was any actor going to fill Ricky Gervais’ shoes and pull off his singular charm? Moreover, the writing was funny and quotable, the ensemble acting superb, and it was a fresh take on the faux cinema verite documentary. However, I do not want to compare the two versions. NBC’s version is not as terrible as I feared and it has some genuinely funny moments. Rather, I wish to understand why an award-winning, short-run, cult British television series such as The Office is an attractive remake candidate for US television, considering that NBC’s broadcasting model requires them to successfully produce four times as many episodes a year for a much larger and different American audience.

NBC’s profitability, during its heyday as “Must See TV,” was anchored by blockbuster sitcoms from The Cosby Show to Seinfeld. Their prime time shows still capture the most prized advertising demographic: 18-49 year-old viewers. In the last few years, NBC has remade several BBC situation comedies with disastrous results, such as Cold Feet, Coupling, and Men Behaving Badly. Given so many attempts at recycling British sitcoms, there is a trend at work here. While there are famous examples of successful British sitcom adaptations in the 1970s (All in the Family, Sanford and Son, and Three’s Company being the most cited), lately NBC seems desperate for an imported sitcom remake to satisfy its core audience, but misses the mark every time. Furthermore, something about NBC’s BBC remakes seem reminiscent of an earlier NBC marketing strategy.

In the late 1990s, NBC ran a summer ad campaign with the tagline: “If you haven’t seen it, it’s new to you.” The idea behind the campaign was that a rerun is only a rerun if someone saw the original airing of the show. It transformed the concept of the rerun from an industrial designation (the second time a show airs on a network) to a question of audience reception (it is only a rerun if the viewer watches it more than once). In an age of channel surfing, NBC was hoping that people who missed the initial airings of “Must See TV” shows would watch them during their off-peak summer broadcasts for the first time. Therefore, “Must See TV” received a corporately blessed time shift from which it never fully recovered. The network’s key slogan in the 1980s and 1990s was a viewing imperative: “Must See TV” meant you must watch when the network says you watch. But in a nod to its time-shifting audience (armed then with VCRs and remotes and now increasingly with TiVo and digital hard drives), the rerun mentality of “new to you” became the newest NBC mantra. I would argue this broadcasting sensibility feeds into the slew of British remakes at NBC, of which The Office is merely the latest attempt. Therefore, it does not really matter whether The Office is a good, bad or indifferent remake, because NBC is not marketing the show as a remake, or even trying to capitalize on the American fan base of the UK original. NBC is hoping that its version of The Office will be “new” to its prized 18-49 demographic.

From this perspective, what lessons might be learned from the remake/rerun strategies fueling Coupling, Men Behaving Badly, Cold Feet and The Office? There are two lessons I wish to highlight. The first is the contradiction of a remake that is “new to you.” I doubt that The Office is really new to the average media consumer. This is different from what was happening during the 1970s British television remake cycle. How many viewers of All in the Family were familiar with its UK source material, Till Death Do Us Part? But today, the proliferation of TV shows on DVDs and cable/satellite broadcasting (along with other communication channels like the Web) means that there is a greater likelihood that these British sitcoms will be well known (and possibly beloved) by key segments of the American audience. Shows like NBC’s The Office will inevitably be compared to their UK originals, and often pale by comparison.

A second lesson to consider is how these remakes could be differently “faithful” to their UK roots. Right now, the failed remakes share the characteristic of being almost too faithful in their transpositions of the source material. The US producers identify American correspondences for locales, characters, acting styles, premises, class structures, attitudes, and jokes and rebuild these shows from the top-down with these replacement parts (it does beg the question whether all British comedy has an American equivalent). This has been a failed strategy so far. One potentially counterintuitive suggestion to create better US remakes is by changing them less and keeping more of their UK flavor. Not all British TV imports are homogenized and Americanized beyond recognition to their UK counterparts. Many shows retain their British sensibility along with their UK stars. Three high profile examples are Weakest Link (Anne Robinson), Supernanny (Jo Frost), and American Idol (Simon Cowell). In fact, one could argue that American equivalents of the British shows, Supernanny or Pop Idol, would not have connected with American audiences outside of the charisma and attitude of its British leads such as Frost and Cowell. And while I recognize that different remake strategies should be in place for situation comedies versus reality television series, an attempt to keep some elements of British comedy might succeed better on US television. Tepid remakes like The Office and Coupling suggest that creators should at least try something new rather than retain an unimaginative fidelity to scripts relocated to [US City or Town Most Like the One in the Funny British Show], USA.

Note
Ricky Gervais makes a similar insight in his discussions about trying to get The Office produced and being asked why David Brent wouldn’t just be fired for being incompetent. Gervais mentions the bosses working at TV networks as a case in point. See Gervais’ comments at The Office on the BBC. Last Accessed on 22 April 2005.