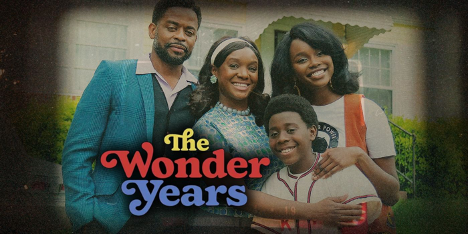 In the second part of my discussion of Black Lives Matter television (BLM TV), I focus on the reboot of The Wonder Years, which premiered on ABC on September 22, 2021. As I said in my first Flow column, “BLM TV is an amalgamation of non-narrative and narrative approaches to interrogating structural racism and anti-blackness on- and off-screen.” Upon initial examination, the new version of The Wonder Years does not subscribe to the conventions I have previously laid out as important to this cycle of programming. However, I want to consider it as an example of the possibilities for BLM TV in articulating the interplay between past and present African American experience as it connects to the expression of black joy against the backdrop of racial discrimination and oppression.

Indeed, critic Aramide A. Tinubu states that while updating a classic network dramedy of the late eighties and early nineties could be seen as unnecessarily tampering with a cultural artifact so tied to its historical moment, in fact the reboot has “never been more timely.” The Wonder Years is set during the late 1960s like the original series, but now centers a black middle-class family living in Montgomery, Alabama. Twelve-year old Dean Williams (Elisha “EJ” Williams) is the series protagonist and episodes follow his perspective as a child while he reflects on his coming-of-age as an adult in the current moment through voiceover narrated expertly by Don Cheadle. In the pilot, adult Dean directly comments on the parallels between 1968 and 2021. “Growing up, mom and dad gave me the police talk” is the very first line he speaks followed by recounting to the audience the social and political climate of the 1960s – racial unrest, a divisive presidential election, and even a flu pandemic – that are all also crises of the present day in the United States. As child Dean rides his bicycle carefree through his black neighborhood in the city, adult Dean explains that the “Long Hot Summer” uprisings of 1967 caused a wave of white flight to the suburbs. The first episode introduces viewers to the Williams household, which also includes
music professor/funk band leader father Bill (Dulé Hill), accountant mother Lillian (Saycon Sengbloh), and burgeoning radical older sister Kim (Laura Kariuki). In the midst of attending a now-integrated junior high school, crushing on Keisa (Milan Ray), and attempting to win a scrimmage game of baseball against a white little league team, Martin Luther King Jr. is shot. Later, the Williams family and their friends watch television coverage as news of his death is reported on air. Shouts and cries are heard from outside the home. The assassination prompts the community to take to the streets in anguish. Though confused about the eruption of violence that occurs, adult Dean relays that the anger made a little more sense as his younger self catches his best friend Cory (Amari O’Neil) kissing Keisa. Otis Redding’s “A Change is Gonna Come” plays as the episode ends with multiple forms of heartbreak. 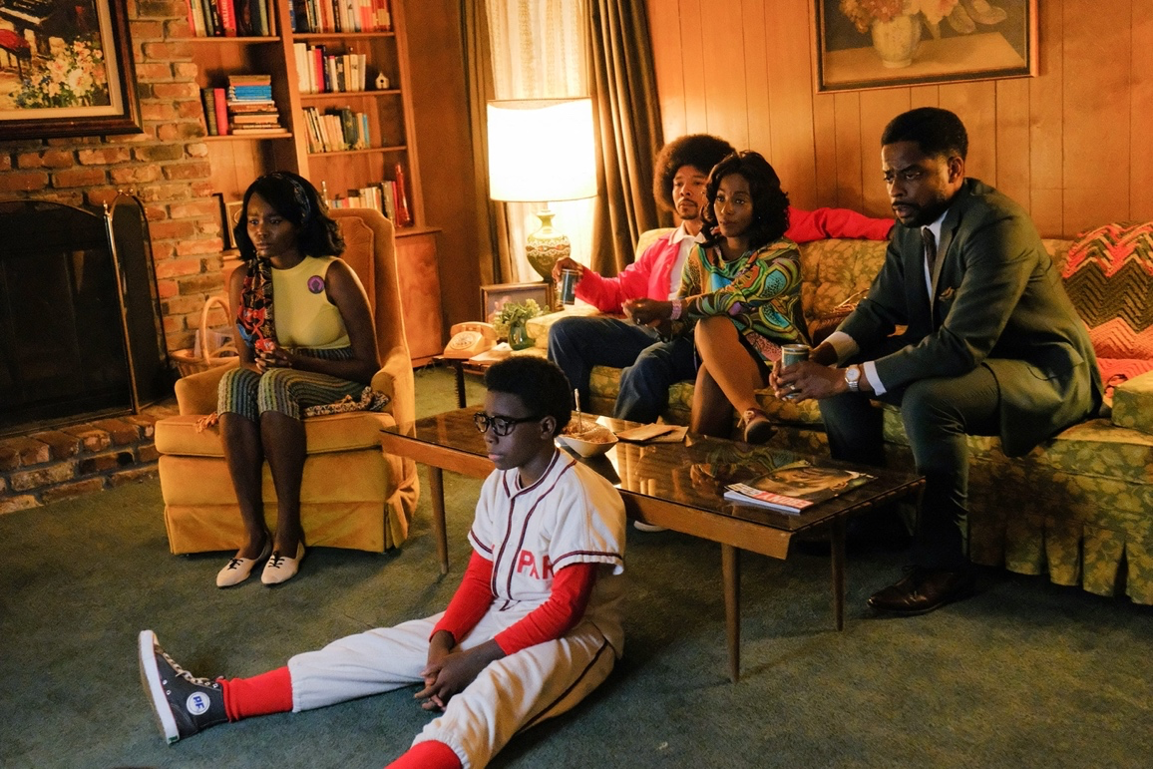 Like many reboots, The Wonder Years was met with some skepticism. Why, exactly, did it exist? Who was the imagined audience? Certainly reboots of all-white programs with casts of color can provide familiarity for viewers at the same time that they work “to challenge the status quo,” (147) as Jacinta Yanders argues of the Latinx remake of One Day at a Time (Netflix, 2017-2019; Pop, 2020). In a sense, the act of re-envisioning television texts of the past with an attentiveness to race can be understood as a kind of reparative gesture in and of itself. However, if such compensatory practices are superficial and do not cultivate cultural specificity and resonance with minoritarian identity and experience, then the reboot is merely window-dressing in the service of diversity and inclusion. Yet The Wonder Years manages to subvert the trap of what Kristen Warner calls “plastic representation.” The reboot produces racialized knowledge about the Civil Rights and Black Power era from the vantage point of Black Lives Matter. Most importantly, the program fruitfully engages with what Badia Ahad-Legardy conceptualizes as “afro-nostalgia” in which black folks “discern and devise romantic recollections of the past in the service of complicating the traumatic as a singular black historical through line” (3). In this way, African-American historical memory is tied to a generative conception of nostalgia and the affective pleasures of feeling good in spite of national upheaval and crisis. Episode Two of The Wonder Years picks up in the aftermath of King’s murder and makes use of archival footage of the funeral. Dean’s church mourns the icon in service while Dean mourns his own unrequited love and the potential loss of a friendship. He is distracted from the black communal trauma at hand as he enviously watches Keisa and Cory sitting together in a pew. When the congregation rises to sing the Negro National Anthem, child Dean looks exasperated as adult Dean complains: “Why did songs about oppression have to be so long?” The rest of the episode explores how Dean’s sadness over his personal troubles comes to be misperceived as grief over King. He willingly accepts a better grade from a concerned white teacher in a humorous example of how he takes advantage of such a perception. With its narrative emphasis on black childhood, The Wonder Years exposes the generational gaps between individual and collective memory of the era.

Herman Gray assesses the “social desires” of contemporary TV programs that remember the Civil Rights Movement and perform “recuperative work” by presenting the figure of the “civil rights subject” (351, 353). Following this trajectory, Jennifer Fuller examines what she terms “civil rights melodramas” of the 1990s that promoted liberal messages of “interracial cooperation and reconciliation” to improve race relations (176). The Wonder Years as a twenty-first century dramedy does not enact the same kind of wish-fulfillment of its predecessors across genres. Its view of the sixties from a child’s eyes and retrospective structure also allows for a strategic hindsight on racial tensions and conflicts that can be read outside of traditional respectability politics. For instance, the series tackles education and integration at the outset. With the closing of the all-Black elementary, Dean and his friends are bussed over to the now-mixed race Jefferson Davis Junior High School. At the school named after the president of the Confederate States, the black kids deal with what we now call microaggressions: white students look disgusted as Cory drinks from a water fountain. A white female teacher makes remarks that are prejudiced (Dean reflects in voiceover that they were probably outright racist) in the classroom. The school gets its first African American faculty member, Mr. Brady, in the episode “Black Teacher.” White students immediately believe that Dean, Cory, and Keisa will get preferential treatment due to their shared blackness. Yet Mr. Brady is from Chicago, wears a kente cloth, and gives lessons on the history of oral tradition through the African griot. Dean remembers his embarrassment: “I always wanted a black teacher but did he have to be so black?” Though Mr. Brady successfully diversifies the Knowledge Bowl team (“A team that was 100% white is now 60% black…that’s what we call reparations math” quips adult Dean), he is met with opposition by white parents and ultimately leaves the school as it is not the right fit for his pedagogical style. Though his time at Jefferson Davis is short-lived, he continues to have an influence on Dean.

Creator and showrunner Saladin K. Patterson comments of the reboot: “We don’t want it to feel like a documentary, we don’t want it to feel too didactic, we don’t want it to feel like we’re preaching or teaching too much about what happened in the times.” The sitcom format of the series demands episodic closure in which moral lessons are learned and The Wonder Years manages such didacticism through narrative nuance in character motivations. In a poignant episode, Dean’s older brother Bruce (Spence Moore II) returns to Montgomery over Christmas after serving in the army in the Vietnam War. However, he decides to re-enlist because lucrative professional opportunities at home are unavailable, despite having fought for his country, due to bigotry. Another episode examines the subtle ways in which racism intersects with sexism when Dean is witness to how his mother thrives at her job despite how she is treated in the workplace. The series punctuates its realism with the fantastical—Dean dreams and imagines—to create levity in storytelling. And of course, there is television. 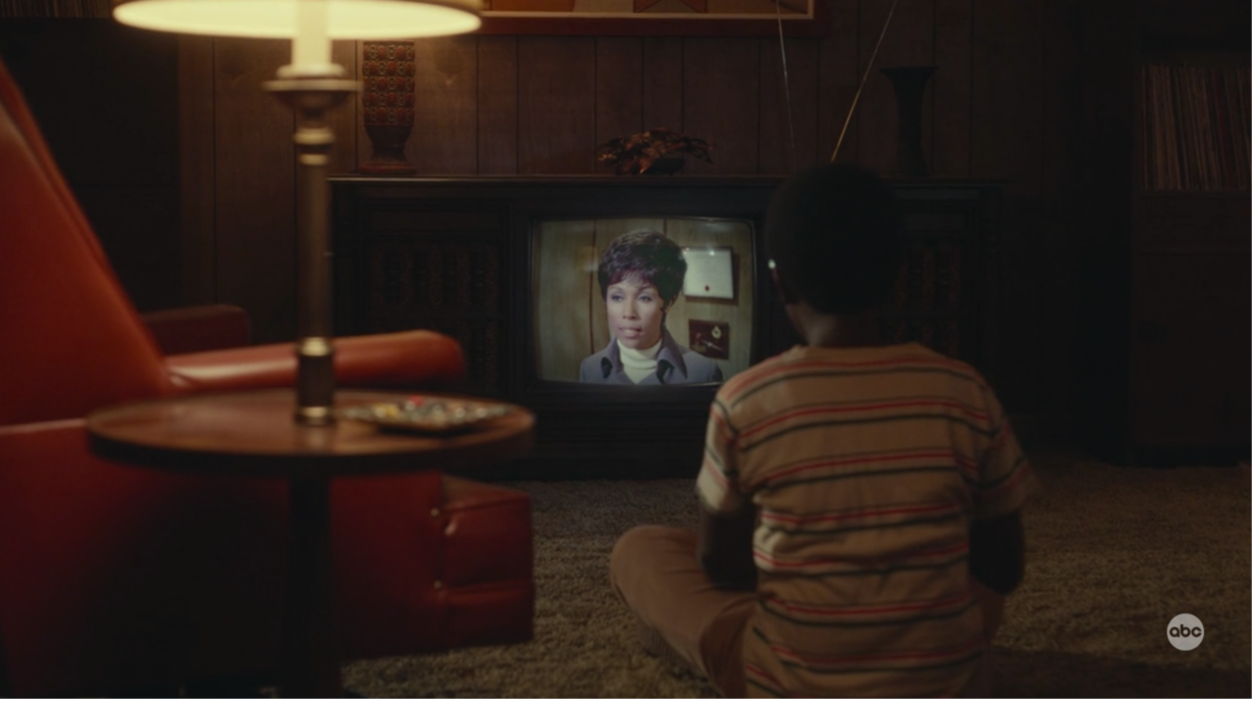 Dean has an affection for television as kids normally do, and it functions as one of the primary apparatuses in which he encounters the world. Ryan Lizardi states that “All forms of the televisual nostalgic modality likewise tend to trigger automatic memories in viewers so they are perpetually enticed to look backwards on their own individualized and media-defined pasts.” (39) As in the original series, the reboot includes references to media texts, but the latter adds a different contour in its exploration of mid-twentieth century black spectatorship that creates an archive of programming that resonates across decades. 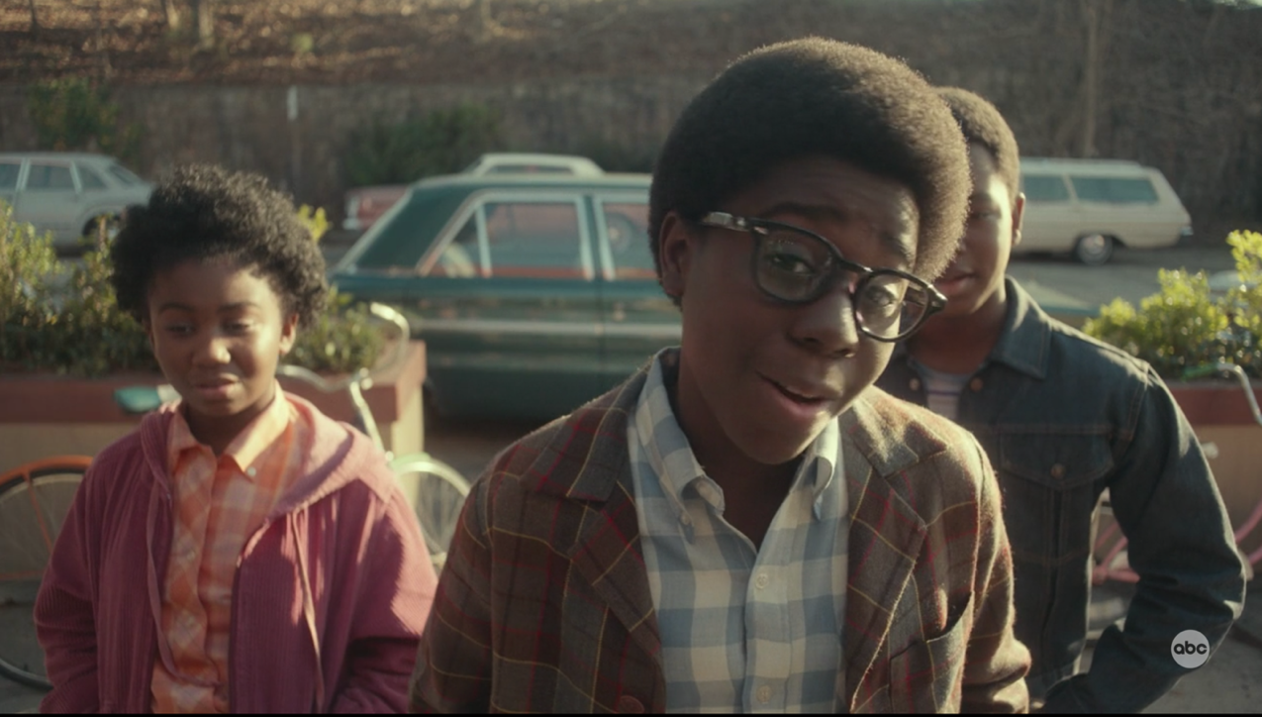 Daniel Marcus writes that the original The Wonder Years (ABC, 1988-1993) “can be seen as part of a generational effort to understand the relationship between two controversial eras in recent American history, the late 1960s and the 1980s, presented from the perspective of a fictional secondary participant in the social changes of the 1960s.” (223) The new version attempts to make meaning between the 1960s and the 2010s/2020s, in a practice of repetition but with a difference. James Poniewozik comments that the current Trumpian MAGA moment gives the rebooted The Wonder Years “an immediate sense of purpose: to integrate TV’s Memory Lane, to complicate our idea of what nostalgia means, to show us what it looks like when someone else climbs in the time machine” and is “allowed to find wonder in the past.” The reboot deserves to be taken up on its own merits—Dean Williams is not Kevin Arnold. In Dean, black audiences are invited to long for a past childhood where particular kinds of innocence may have been foreclosed, but you still had to stay out of grown folk’s business. With its wholesome whimsy, The Wonder Years is indicative of how TV can explore nostalgia and express sentimentalism as constitutive of black subjectivity even in the current BLM moment.