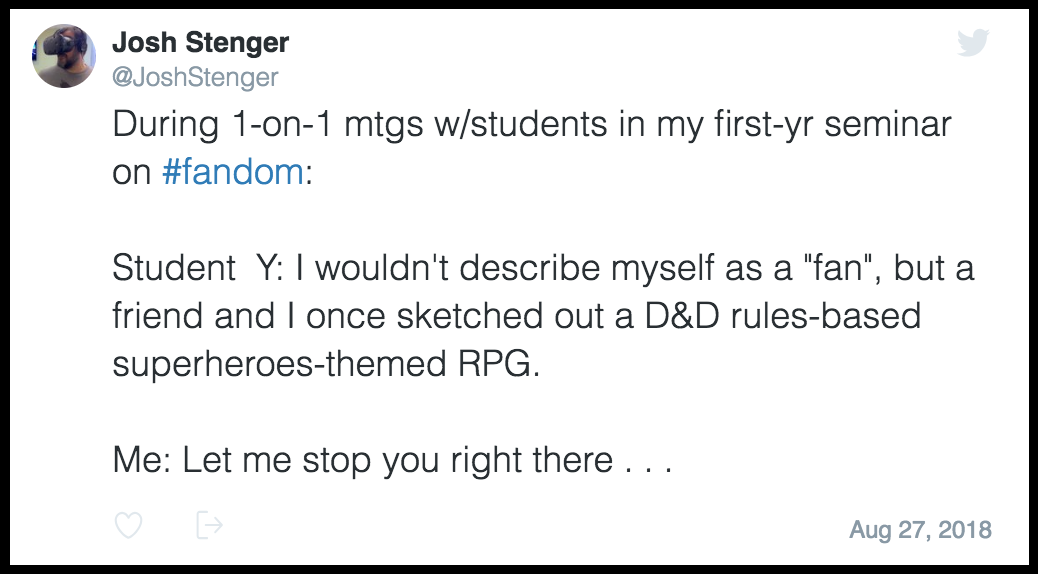 So much has changed in the eight years since Paul Booth claimed in this same journal that “the time has come for a critical reassessment of the value of fandom within the academy.” I believe he was quite right, just as I believe the academy has developed a fuller understanding of fandom’s value, thanks in large part to the dauntingly robust body of scholarship and curricular and pedagogical innovations of so many fan studies scholars. I would like to propose a different kind of critical assessment, or rather, a realignment, and a time-sensitive one at that. No one needs to worry whether or not higher education is going to be disrupted. SPOILER ALERT: It is. Whether the disruption is dramatic or traumatic will depend to some degree on whether the transformative changes it entails are adopted from within or imposed from without. In what follows, I hope to begin a conversation about the ways in which fandom and fan studies are distinctly well-suited to help effect some of the changes the academy needs to consider making if it hopes to proactively navigate the uncertainties ahead.

“The college education we need today must prepare our students for their epic journey, the mountain and the cliff’s edge. It should give them agency, arm them to take on a difficult world, to push back and not merely adapt to it. […] To revolutionize the university, we don’t just need a model. We need a movement.”
– Cathy N. Davidson, The New Education[1] 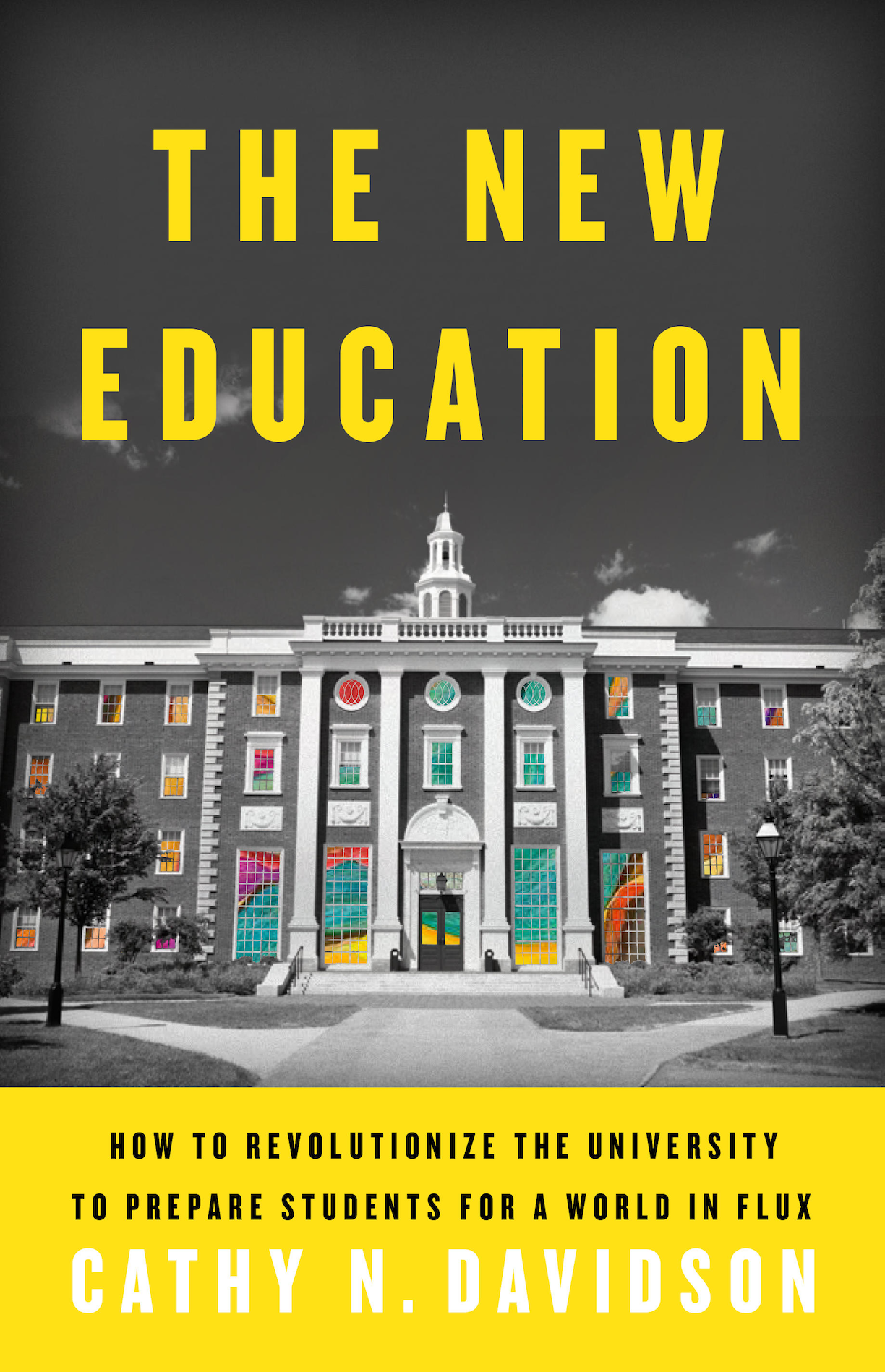 The modern American university came into being between roughly 1860 and 1925, and was designed, according to Cathy Davidson, to train and credential “the professional-managerial class in a time of rapid technological, scientific, social, and economic change.”[2] We are currently about two decades into a period of comparably disruptive technological, scientific, social, and economic change. Despite this, as Davidson argues in The New Education, our institutions of higher learning remain stubbornly yoked to the past in a number of consequential ways, making the need “to revolutionize the university to prepare students for a world in flux” increasingly urgent.

If academics and academic institutions aspire to contribute meaningfully to our students’ ability to navigate and contribute to the world as it will (soon) be rather than as it (just) was, we need at least to be willing to let go of some of our most entrenched structures and practices. Davidson contends, for instance, that we must “redesign the university beyond the inherited disciplines, departments, and silos by redefining the traditional boundaries of knowledge and providing an array of intellectual forums, experiences, programs, and projects that push students to use a variety of methods to discover comprehensive and original answers.”[3]

Achieving this will not be easy.

Most colleges and universities accommodate, and many actively encourage, some degree of change within existing disciplinary, curricular, and administrative entities – e.g., individual courses, major requirements, academic departments, and the like. However, the system as a whole has always favored continuity over disruption, and so structural transformations that ramify across, between, or throughout these entities, are often regarded as impossible, anathema, or both. This is neither accidental nor inevitable, and for over a century it has reified an educational model that privileges disciplinary bodies of knowledge and expertise.

In the proverbial “real world”, however, bodies of knowledge are promiscuous, unruly, and un-disciplined, and are arguably becoming more so all the time.

So where does all this leave higher education, and what does it have to do with fans, fandom or fan studies?

“Fandom as a practice has always existed in an uneasy relationship with its own academic study.”
– Paul Booth, “Fandom in/as the Academy”

If, as Paul Booth observes, there is an “uneasy relationship” between fan studies and fandom, xkcd’s “Purity” suggests there may be any number of uneasy relationships between certain disciplines and, well, other disciplines. Academics’ capacity for disciplinary self-importance notwithstanding, disciplinary hierarchies are a reality in higher education, though they tend to be shaped by external rather than internal dynamics. “Some disciplines are culturally valued higher than others,” Booth explains, making “the choice of what we teach and study […] limited by those that have value in our culture” as determined by “ideological validation” and associated market forces.[4] Over the last decade or so, the value of a given discipline, and indeed of a college degree, seems to rise and fall based not on factors like intellectual purity or specialization, but employability and professionalization.

It is worth noting that in either scenario, academics who teach and research certain aspects of popular media can expect occasionally to find themselves having to explain, or even to defend, their fields to colleagues or administrators, just as our students can expect occasionally to encounter skeptical family members eager to know why someone would go to college (‘just’) to study fandom or video games or television. Such interactions may be motivated by doubts about these fields’ intellectual rigor, academic legitimacy, or pre-professional worthwhileness. And whether initiated by a senior professor keen to protect and preserve the (“purity” of) traditional academic disciplines or by a parent anxious about the enormous cost of a college degree, they express a common belief that if a body of knowledge can be acquired without the specialized expertise of a university faculty it should be.

They also express a common anxiety about the ability of higher education to justify itself in a post-Internet world. We should not trivialize that anxiety, but neither should we disregard the value of forging thoughtful, intentional connections between academic and non-academic knowledge, skills, and expertise. Analogous connections between knowledge communities happen online all the time, almost always resulting in opportunities for productive tensions to be explored and resolved through what Henry Jenkins usefully describes as “exercises in popular epistemology,” where the emphasis is “as much on how we know and how we evaluate what we know as on the information itself.”[5]

Fandom and fan studies have a meaningful role to play in helping colleges and universities reexamine, and hopefully even transform, how, whom, and why they educate. They are not alone in this, to be sure, but I believe they are particularly well-suited to the task. Consider, for instance, that despite (or indeed because of) the fact they have an “uneasy relationship,” fandom and fan studies have a long history of interacting, collaborating with, and yes, challenging each other in ways that, more often than not, are mutually edifying.

Below, I offer several additional observations and examples of how and why fans, fandom and fan studies can contribute to the kind of “new education” Davidson describes, and invite readers to think of and to share how other disciplinary traditions and forms of knowledge might do so as well. 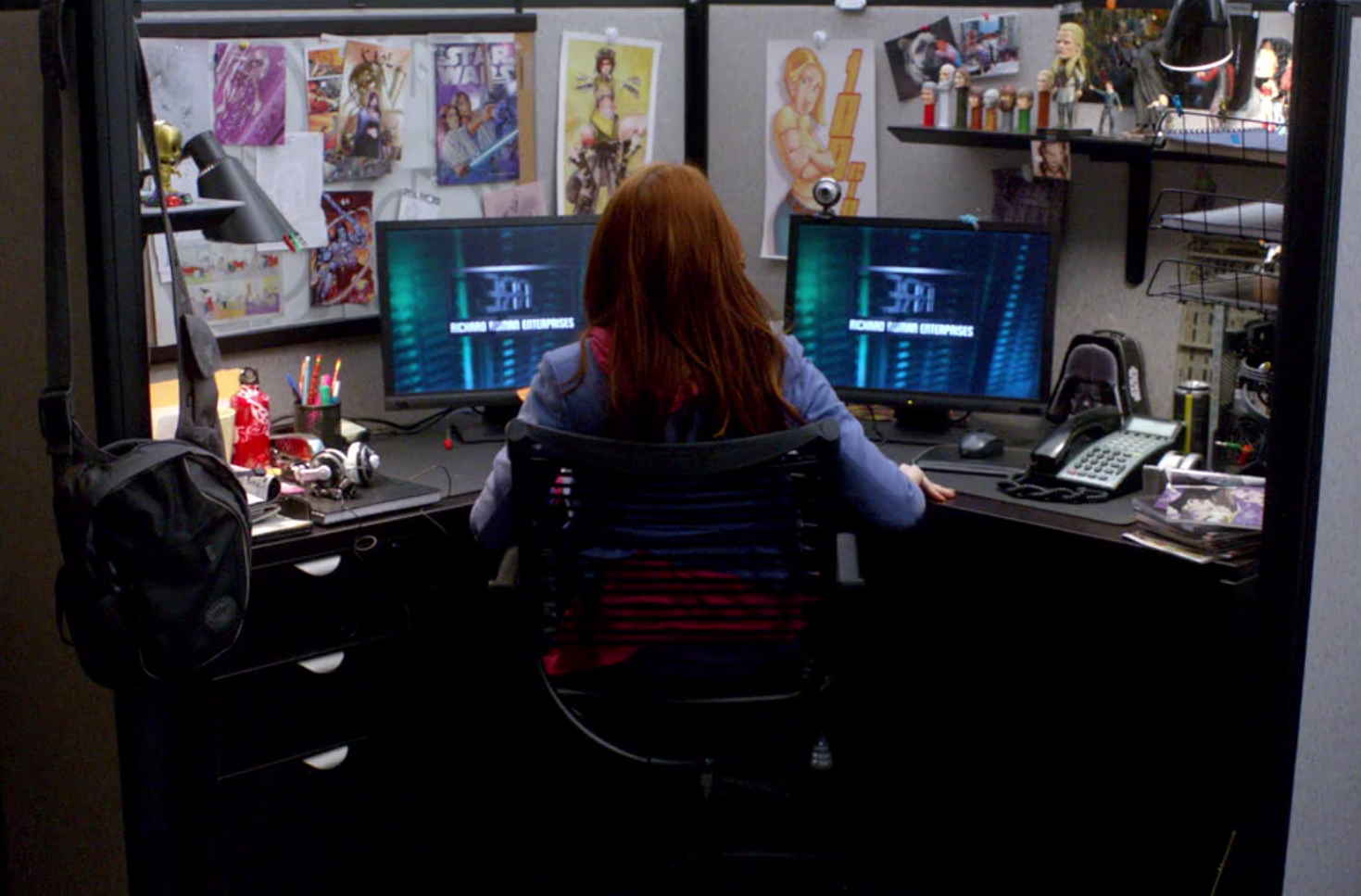 Fangirl and white hat hacker Charlie Bradbury (Felicia Day) in Supernatural (“The Girl with the Dungeons and Dragons Tattoo,” S07e20)

Last but not least, and in conclusion, fandom and fan studies are just so ‘meta’. That is, they tend to be deeply self-reflexive pursuits wherein even well-established epistemological, methodological, ethical, and community norms are regularly reexamined, refined, and renegotiated as needed. This at once results in and from—and to a certain degree requires and rewards—a relatively high degree of active participation, engagement and communication among members of these communities. At the risk of seeming either cynical or glib, one suspects there are lessons here for faculty and administrators as well, for if there is any chance of revolutionizing higher education, we must be willing to reevaluate everything, and to listen to and work with everyone who shows up.