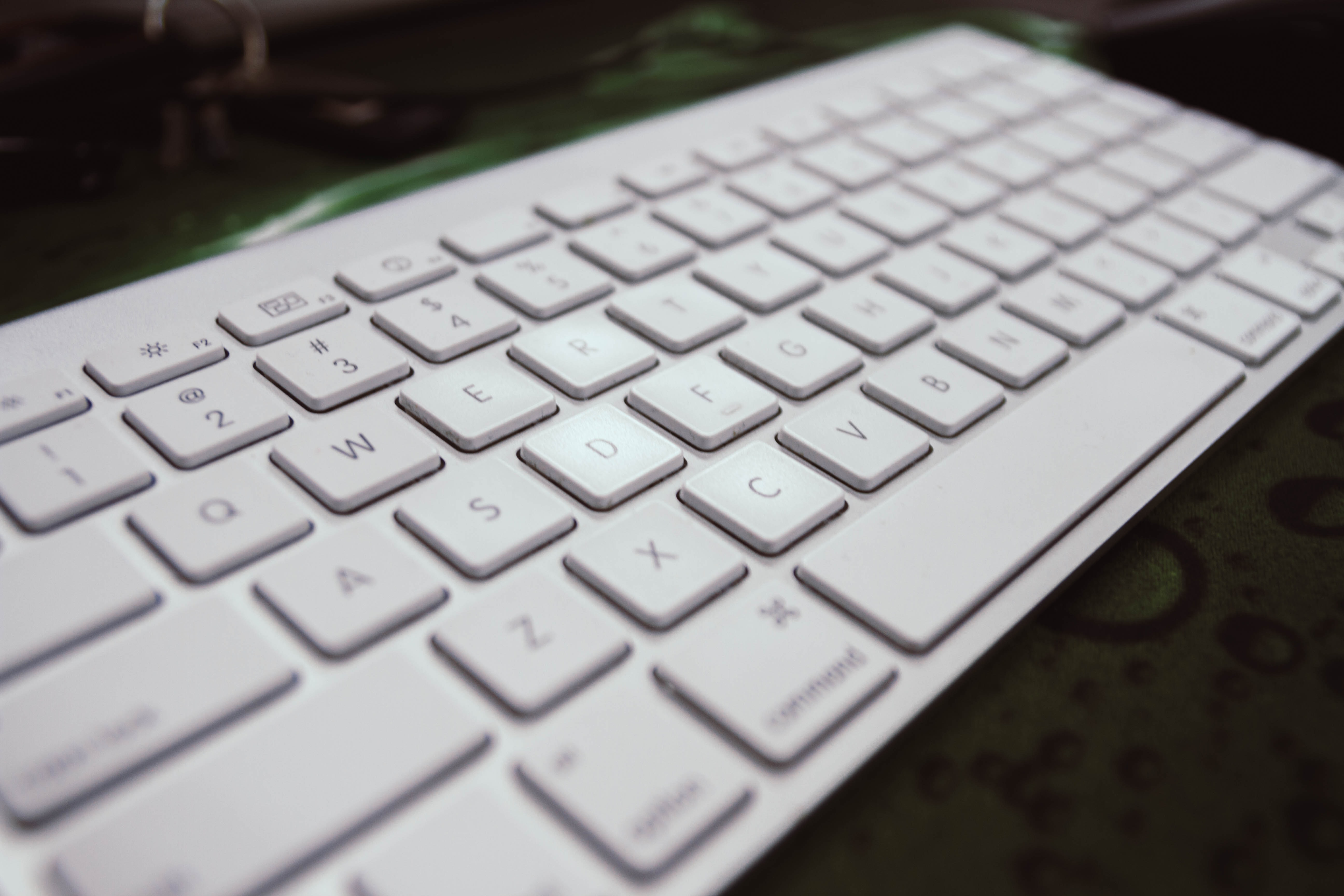 A picture of a keyboard.

Before email became a routine task and sink-hole for newsletters, direct marketing and spam, it was a format for play and trouble. In Flow’s last issue, Kevin Driscoll argues that if we want to understand the commercialization of the internet since the 1990s, we have to look more closely at email. Building on this, e-mail is also a window into the web’s early potential as a queer space for sexual expression before this commercial trajectory was resolved.

Many online protests in the 1990s used email to replicate postal letter-writing campaigns. Often written off as “clicktivism,” these campaigns allowed people to join protests without leaving their keyboards. One high-profile online protest in 1996 raised the stakes of email protest with a more experimental tactic: using attachments. Organized by free speech group Interactivism, this protest asked Americans to engage in direct action, breaking an unjust law by emailing dirty files to politicians. 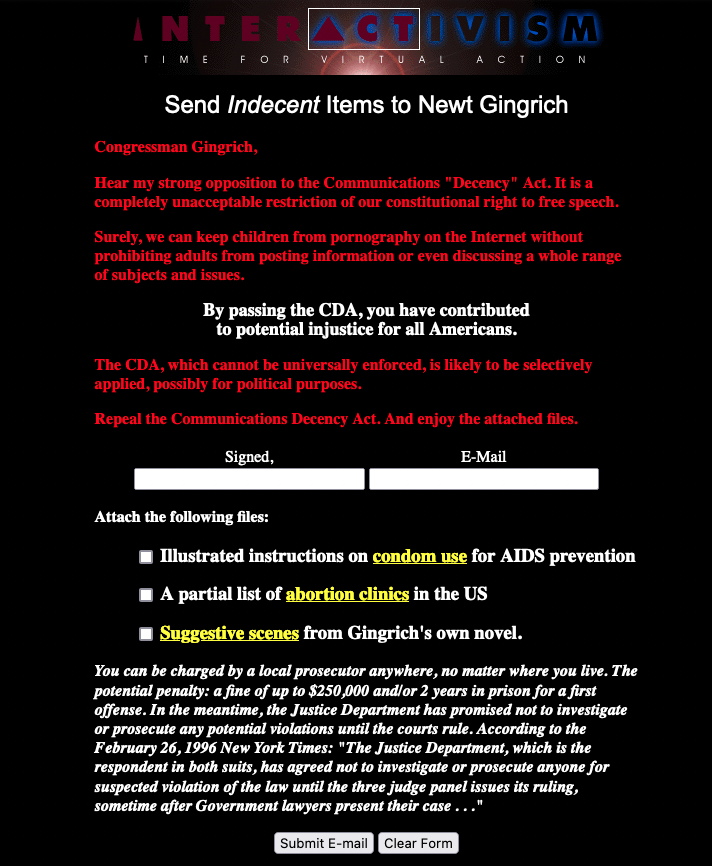 Screenshot of an Interactism email generator for the CDA attachment protest.

Protestors emailed a series of technically “indecent” files as attachments to Speaker of the House Newt Gingrich using an online email generator. Selecting from a menu, senders chose their attachments, wrote their name and email address in text boxes, and clicked “Submit E-mail,” all within a web-based form. By inundating the Speaker’s email account with files large by mid-1990s standards, senders cleverly broke the censorship provisions of the act, putting themselves at risk to the criminalization of sexual expression online.

In their content, size, and abundance, these attachments presented a misfit with Gingrich’s inbox and the act’s notions of criminality: these files shouldn’t fall within the drag-net of indecency, but they are sent with intention to break the law. 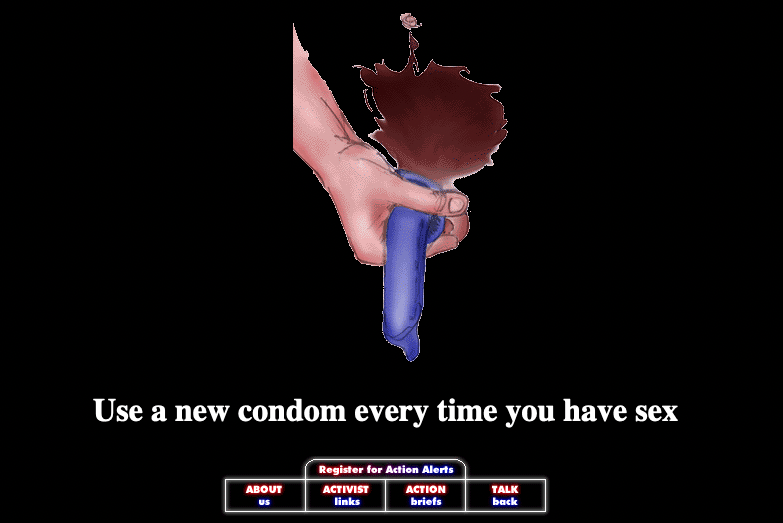 The first attachment, “Illustrated Instructions on Condom Use for AIDS Prevention,” is an entirely ordinary series of instructions, ubiquitous within 1980/90s safe sex discourse. Simple, semi-realistic drawings of a cobalt blue condom being lubricated, rolled on to an erect penis, and then removed are not at all titillating, but they do depict an erection, complete with a hairy sack: the images would get an R rating from the MPAA, but you might just as easily find them in a pamphlet in the guidance counsellor’s office.

The second attachment, titled “Abortion Clinic Listings,” also pokes at the concept of indecency but does so without the visual depictions of sex most often associated with the early internet as a pornified space. As an .html file, this is just a list of names and phone numbers, but the information points toward abortion, an “indecent” prospect to pro-lifers. Declaring this attachment indecent or patently offensive would set a highly censorious precedent by making pointing to information a civil liability and criminal offense. 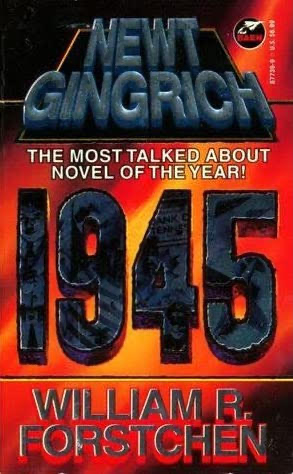 The third attachment users could select for the protest was a text file listing excerpted sex scenes from Newt Gingrich’s own novel: 1945 (1995). I have not read 1945 and don’t plan to, but this file, titled “Naughty Nips from Newt to Newt” suggests the book is a spy novel set in D.C. that features many “pouting” and “purring” “sex kittens” and is probably not very good. This attachment playfully emphasizes that a whole lot of communication about sex is actually quite banal, cringeworthy even, and that almost everyone does it. The attachment concludes, “Tame stuff, clearly, even to many of those pre-teens on the Internet the ‘Decency Act’ is supposed to protect. But possibly ‘offensive’ by some community standards and potentially illegal today on the Internet. Poor Newt.”

Each of these attachments is indecent by some community’s standard, but obviously should not be censored, either because of the social good the information offers, or because the content is utterly unsexy even though explicit. As the form message put it, “The CDA, which cannot be universally enforced, is likely to be selectively applied, possibly for political purposes. Repeal the Communications Decency Act. And enjoy the attached files.”

Gingrich and the public servants answering his email are not meant to enjoy these files. They aren’t salacious, and in the case of Gingrich’s own book, are making fun of the politician’s milquetoast sexual taste. Participants broke the law with awareness that they were really only making trouble: overloading a government email server, sending more messages than public servants could read through and sort, and pointing out the law’s intractability in practice.

Email attachments make trouble at the level of design. Often this trouble happens when an attached file is incongruous with the message itself: you think you’re opening a useful document from a co-worker but it’s actually malware, or the attachment is a bait-and-switch punchline for a joke begun in the message itself. A related technique uses mis-directed hyperlinks; think Rickrolling. The incongruity between a message and attachment opens on to humor and trouble: the internet nerd’s perfect set-up.

Protest messages appended with sexually explicit files are instances where email attachments served as low-key “dirty” communication. Once removed from the message itself, they expand how we understand attachments. Through attachments, stigmatized sex practices infiltrated everyday messaging and entangle sex with email.

The “bad attachments” protest grew out of a more fundamental disagreement over another shared set of objects and imaginaries: the nascent web. Online information about sex was vital to communities with limited access to other channels, including queer and rural youth, people living with HIV, sex workers, kinky people committed to niche sex practices, and others. For a moment in 1996, their interests happened to dovetail with the goals of libertarians and tech companies, who envisioned the internet as new colonial frontier that needed protection from regulation.[2]

Protest attachments constitute a queer, material digital practice, attuned to the political demand for information access as a means of survival and sexuality as a public and intimate mode of being in and working on digital networks.[3] For these users, the web was a scene of potential liberation worth making trouble over.