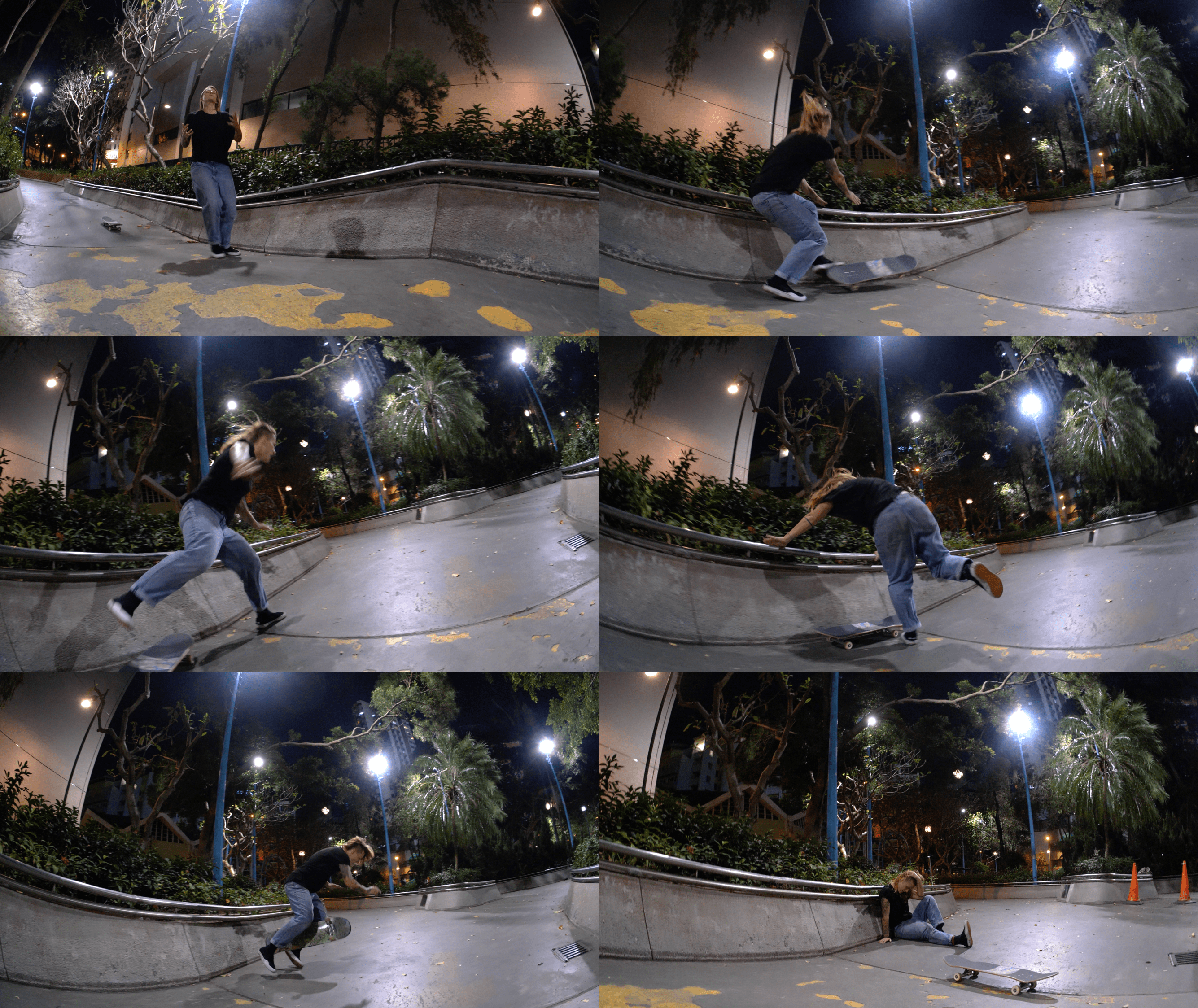 Skateboarding is a discipline of failure. This is intriguingly present, addressed and mythologised in the media of the culture. Ever since videography began to be a popular method of capturing the skills and progression of skateboarders, there has been a focus on the unavoidable truth and persistence of failure. In this article we will introduce how skateboard media represents failure, and in turn discuss the ethics of failure in skateboarding, identifying a philosophy and pedagogy which must be critiqued and appraised.

Failure is a relation as much as it is an activity that traces the incremental mastery of movement over time.[1] Skaters fail so that they get a better understanding of their equipment – made up by their board and the built environment – and find success in subsequent efforts to land tricks. The vernacular for a success in skateboarding is a ‘make’, a rather tepid term that emphasises the ubiquity of the fail.

Skateboarders use the mantra of falling and getting back up in other aspects of their lives, too. As high school teacher John Dahlquist[2] explains during a panel on skateboarding and education, “At the end of my classes, I usually have to throw my students out of the classroom. A lot of them beg for three more tries: ‘I’ve got this, just give me three more tries. I promise I will learn.'” Dahlquist teaches at Bryggeriet, a high school (Gymnasium) in Malmö run for and by skateboarders.

Skateboarding can be a learning tool through its blatant embrace of failure, yet this philosophy has permeated the media representation of the culture in ambiguous ways. It is celebrated with pride and a recognition that success and innovation are not a triumph over failure, but more truthfully the bounty of failure.

Skateboard media has largely followed the standard media timeline from scarcity to plenty.[3] Skateboarders growing up in the 1980s were for the first time able to access niche videos filmed and produced by skateboard companies. Being subcultural products, these not only spoke to the values and aesthetics of the community, but they also established a convention that exists to this day.[4] Skateboard videos were typically 30 to 60 minutes in length and showcased the best skateboarding of each of the skateboarders on a team. Notably, even though a team is represented, the video is composed of individual parts each focusing on one skateboarder. Each part is typically the length of a song, and the music makes up an integral part of the skateboarding video.

These parts would be played ad nauseam in skate shops, to the point where skateboarders intimately knew the ins and outs of the video – from the tricks performed and the attire of each skater to the rhythm of the soundtrack and the sounds of polyurethane wheels on a variety of surfaces. Skate videos were made to be played on repeat, to be rewinded until the VHS spool would fall apart and the video would be glitchy or unusable.

In the popular VHS videos of the mid to late 1980s from companies such as Powell Peralta, Santa Cruz, Vision, and H-Street, these highlight reels of individuals  were complemented by a part called the ‘slam section’. In contrast to the rest of the video the slams were captured fails of each of the skateboarders, often comical, mostly superficial falls and slips, and occasionally painful cuts and broken bones. The inclusion of these fails is worthy of note and has, along with other elements of the VHS skateboard video convention, endured and transformed along with new media.

By the mid-90s skateboarding had become more niche and the media conventions were self-aware and savvy.[5] The slam section disappeared and instead the fails became peppered in with the rest of the skateboarding. For a professional skateboarder, the most painful or absurd fails became additional motifs in their part. Take for example the final clip from Ali Boulala’s part in the iconic Flip video Sorry from 2002. Boulala attempts to jump the enormous and now famous Lyon 25 set of steps. He fails, painfully injured on the floor, but the miss is a goal, making him relatable, human, one of us.[6] These fails highlight that the skateboarder is no superhuman, and reject the suspension of any belief in their omnipotence. Instead, they instruct viewers of the necessity of hard work and persistence that each successful trick included.

The most recent manifestation of the fail in skateboard media comes from the dual developments of digital video technology and online streaming services. The Thrasher YouTube video channel is one of the premier sources for the dissemination of skateboard videos. It is here that most skateboarders aspire to have their footage hosted.

As the longer format videos have become less common, the new norm is for skateboarders to release a ‘part’ independent of a larger video. This in effect is a short solo or team video between approximately 3 and 10 minutes. It will typically contain a carefully curated number of fails to balance the aesthetic that skateboarders are accustomed to.

Increasingly, Thrasher is also releasing ‘raw files’ of these parts, extended footage of a number of failed attempts. These are not edited to music, and will often contain unspectacular failed attempts, sometimes dozens upon dozens. An example of this is the Chima Ferguson ‘Nice to See You’ part released on Thrasher’s YouTube channel on October 14, 2021. The video serves as a promotional video for the skateboarder and his shoe sponsor Vans. The video duration is just over six minutes but a subsequent ‘Raw files’ video of the same part released on December 2, 2021 is substantially longer at nearly thirty-six minutes  and provides a behind-the-scenes look at the hard work, fails, and imperfect attempts at many of the tricks he performs.

Another Thrasher series, ‘My War’, allows skateboarders to talk about a location and trick that has caused them ongoing challenges. Ultimately the video concludes with the success, the make, but the bulk of the narrative is on the failure. Similarly the ‘Quartersnacks • Favorite Spot with Andrew Allen on L.A. High’ from October 2021 is hardly a celebration, as the majority of the footage is of Allen falling, failing, and despairing at this location which has become an adversary in his career. 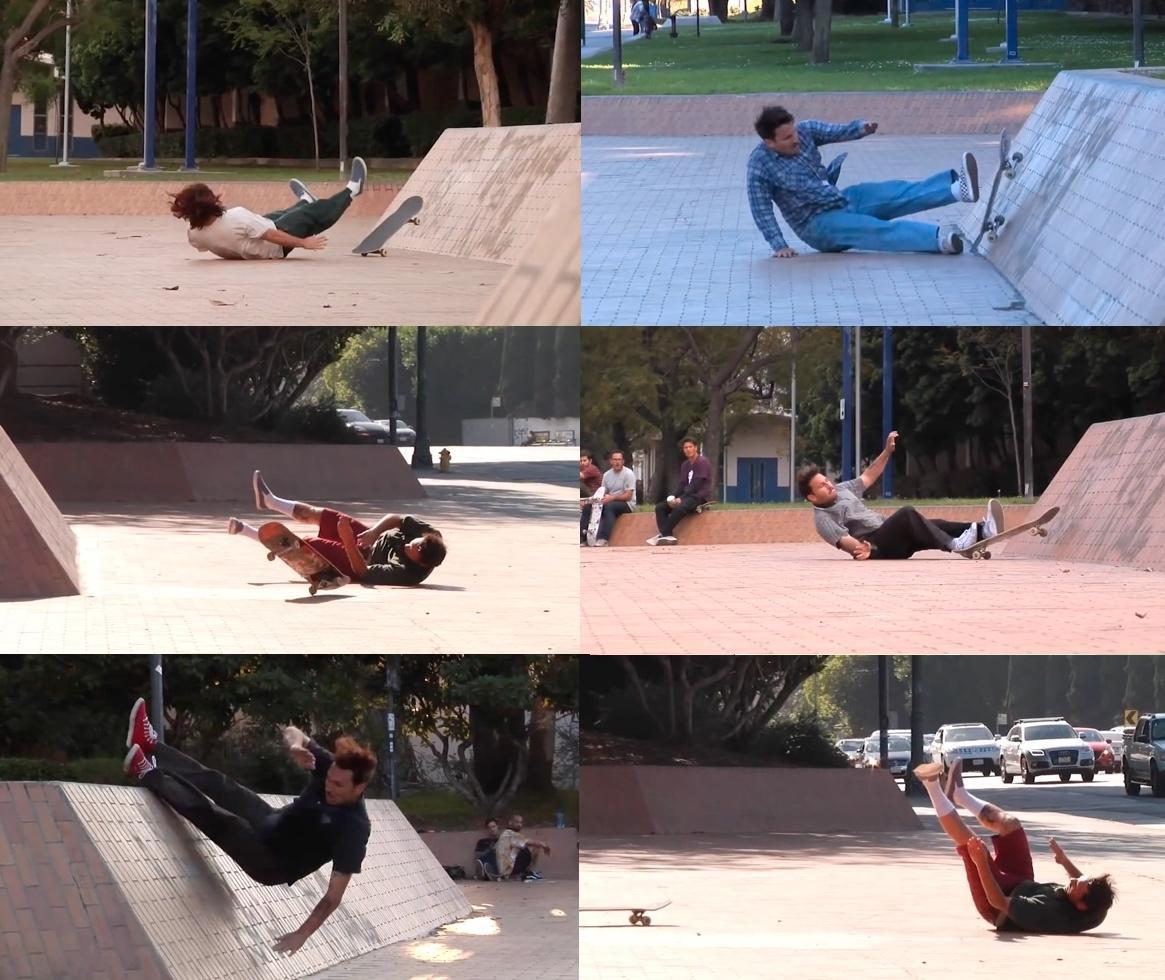 What is the value of failure for skateboarders? What does it symbolise and construct for them? We can argue that it is in part an affirmation that skateboarding is difficult, painful, and frustrating. That any success on the board is also representative of a legacy of defeat.

From a political paradigm, failure in skateboarding is a motif about resolve, hardiness, and an ethic of hard work. It is the exquisite demonstration of neoliberal self-reliance, a persistence to rebound in the face on an unending austerity in opportunity. Indeed, the abrasions, aches, and pains are predictable, unlike the success. The media representation of failures also speaks to the kinds of skateboarding that are deemed worthy of being filmed: you can fail, as long as the tricks are extraordinary. To a certain extent, failure in skateboarding builds upon narratives of the hustle, of meritocracy, of the self-made man.

Critiquing this philosophy, the Tired Skateboards collective offers a space for alternative failure. In the collective’s videos, it’s not about the aestheticised failure of godlike choreographies, but rather about minor failures: ageing bodies that feel fatigued, move slower than their younger counterparts, and tumble over the smallest of curbs. And yet, these skaters are more than willing to fail, even if their falls and defeats break away from the contemporary currency of the spectacle.

Media representations like these speak to honesty. There is no fourth wall in skate media. When trying the hardest tricks, videographers and photographers are often present – filling their SD cards and mini DV tapes with hours of failure. There’s no such thing as a bad take: falling or failing builds both a fetishised aesthetic and a pedagogy of the bold. For failure teaches skateboarders a sense of resolve and humility that is cautioned against in a risk-averse world.