Portrait of an Art House during a Pandemic, Part One
Sarah E. S. Sinwell / University of Utah 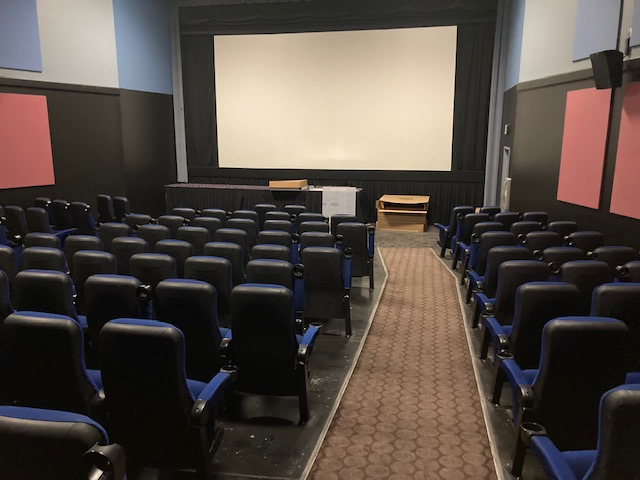 The Salt Lake Film Society closed both the Broadway and Tower Theatres in March 2020 due to the pandemic.

On March 13, 2020, like most art house cinemas and other movie theatres across the United States and even the world, the Salt Lake Film Society, home of the Broadway and Tower Theatres in Salt Lake City, Utah closed its doors due to the global pandemic. This essay studies how local non-profit art house cinemas responded and adapted during the pandemic in order to continue to uphold our mission “to educate, advocate, and inform about—and through—cinema.”[1]

As an active part of the art house community in Salt Lake City, I have been a member of the Executive and Governing Boards of the Salt Lake Film Society since 2015, and Vice Chair of the Board since 2021. Over the years, my positions on the Executive Board have enabled me to take on more of a decision-making role in relation to both financial planning as well as the revisions of the by-laws and the future plans for the Tower and Broadway Theatres. Since the closing of both of our theatres in March 2020, we often had Executive Committee meetings once a week (as opposed to our usual monthly schedule), in addition to many emergency meetings to discuss COVID-19 safety protocols. At the same time, the Board and staff were also working on our Diversity statement, recruitment to the Board, fundraising, and trying to keep our community and audiences engaged with the theatre and our screenings even while our doors were closed. Keeping the theatres closed also required full-time labor on the part of the employees of the Film Society as they ordered safety equipment, inventoried our concessions and video collection, applied for grants, and monitored our facilities. Particularly at the Tower theatre, a historical theatre that occupies a central portion of our historic 9th & 9th neighborhood, our employees and staff received constant questions and concerns regarding its closing since so many of our other favorite neighborhood restaurants and shops had closed during the height of the pandemic. 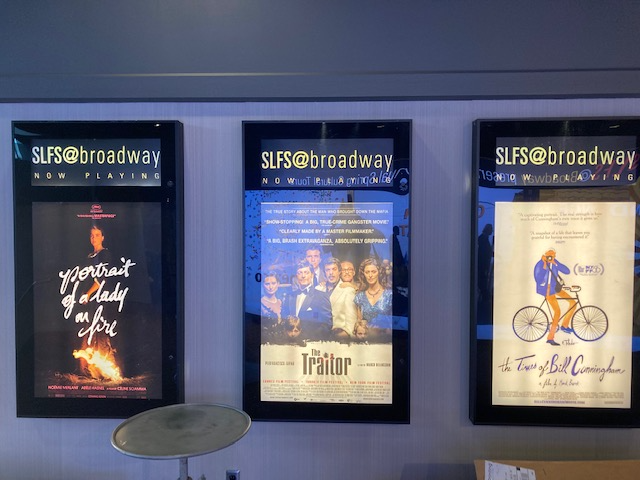 Seventeen months later, the Broadway Theatre still had posters on the walls from March 2020.

On August 11, 2021, I returned to the Broadway theatre to attend a special event screening open to a closed community of film lovers in Salt Lake City. When I re-entered the lobby of the theatre for the first time since March 2020, almost a year and a half later, the walls still held the posters from all the films that had been playing in our theatre when I last visited on March 9, 2020. I remember this date so well since it was my last time at the Broadway before it closed on March 12, 2020. Since my university was on Spring Break for the week, I was able to attend a matinee screening of Celine Sciamma’s Portrait of a Lady on Fire (2020), a film I had seen once already a few weeks earlier at a special preview. The posters on the walls of the lobby included not only Portrait of a Lady on Fire, but also Seberg (Benedict Andrews, 2019), Parasite (Bong Joon-ho, 2020), The Traitor (Marco Bellochio, 2019), and Fantastic Fungi (Louis Schwatrzburg, 2019). 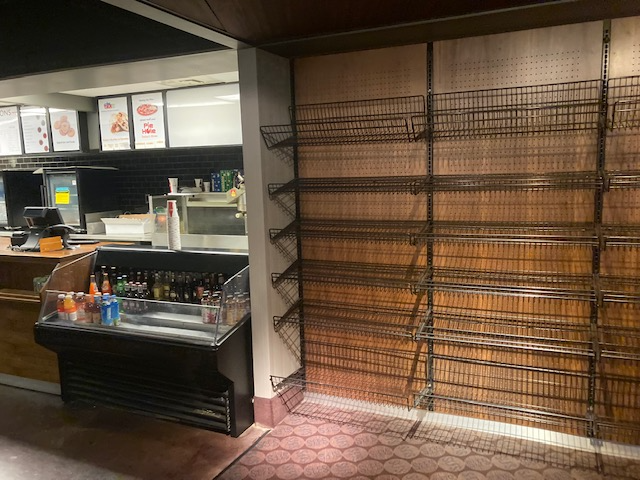 The nearly empty concessions area at the Broadway Theatre in Salt Lake City.

A time capsule of pre-pandemic times, the concession stand still held kombuchas and high-end local sodas, although the other food and candy had been removed from the lobby since they had already passed their expiration dates. I learned that even concessions such as Vitamin Water had expired during the pandemic, while our theatres were now stocked with masks and other health and safety equipment, extra water bottles, and plexiglass screens. 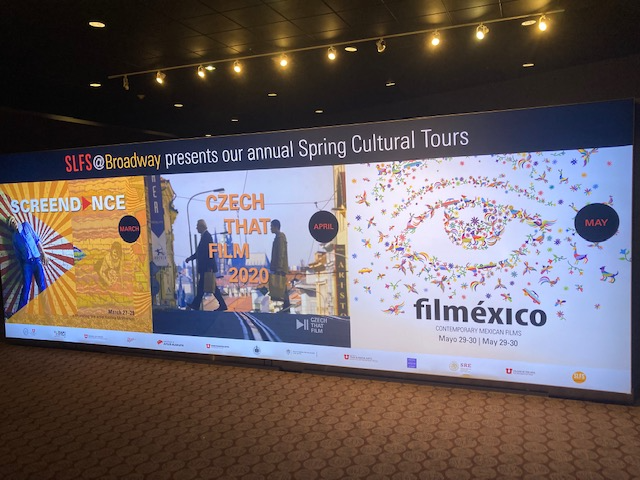 The Salt Lake Film Society was able to transition its Filméxico programming online during the pandemic.

Also, on the walls of the theatre was evidence of three of our annual spring cultural programs from earlier in 2020, the Czech That Film, Filméxico, and Screendance Film Festivals. As we transitioned to online programming during the pandemic, we were able to offer the Filméxico festival virtually, along with three new virtual film festivals, including our new Climate Change Film Tour as well as the L’Chaim Jewish Film Tour and the Masima Pacific Islands Film Tour in spring 2021. As stated in a press release from the Film Society in October 2021, these tours 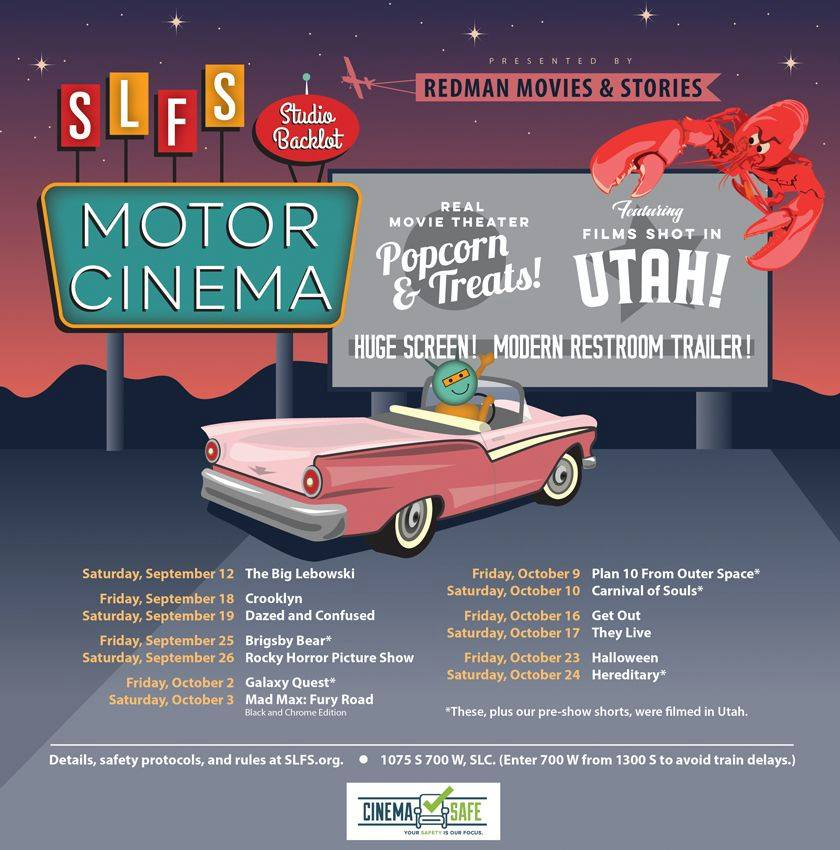 Pivoting to these online festivals was only part of our strategy, however. At the same time, our non-profit organization was transitioning to alternative modes of theatrical exhibition in an environment in which re-opening still seemed unsafe. Collaborating with local film production company Redman Movies & Stories, we created a drive-in movie theatre called the Studio Backlot Motor Cinema in fall 2020, screening such films as Plan 10 from Outer Space (Trent Harris, 1995), The Big Lebowski (Joel and Ethan Coen, 1998), and Mad Max: Fury Road (George Miller, 2015). We also utilized our knowledge of art house exhibition to create our own streaming service, SLFS@home and @HomeArts. Starting with providing streaming to our own community from the Salt Lake Film Society, over the course of the pandemic, we extended this service to 34 other non-profit art house cinemas and arts organizations across the country, including the Coolidge Corner Cinema in Brookline, MA, the Avalon in Washington, DC, and the Roxie in San Francisco, CA. In late 2020, I was even asked to curate a special collection for SLFS@home, including Driveways (Andrew Ahn, 2019), Abe (Fernando Grostein Andrade, 2019), and Coded Bias (Shalini Katayya, 2020). I had seen some of these films when our theatres were still open, but, most of them I had seen through the SLFS@home platform itself. Among other favorites on our streaming service were Shirley (Josephine Decker, 2020), Yes, God, Yes (Karen Maine, 2019), Sundance shorts, and the Wong Kar-wai collection.

Closed for 589 days, the Broadway reopened its doors on October 22, 2021 with screenings of Dune (Dennis Villeneuve, 2021), Jodorowsky’s Dune (Frank Pavich, 2013), Bergman Island (Mia Hansen-Love, 2021), The Rescue (Jimmy Chin, 2021), Velvet Underground (Todd Haynes, 2021) and The Harder They Fall (Jeymes Samuel, 2021). Unable to re-open the historic Tower Theatre due to supply chain issues, the Broadway also did not open all of its six screens, since we are still in the midst of trying to improve some of the auditoriums. In the meantime, SLFS@home is still in operation and screening such films as Ema (Pablo Larrain, 2021), The Mustangs (Steven Latham, 2021), and Summertime (Carlos Lopez Estrada, 2021) and Filméxico returned as a hybrid festival (much like the Sundance Film Festival itself) in November 2021. While the Studio Backlot Motor Cinema remains a semi-permanent third venue for SLFS, it is uncertain what the future of drive-ins (and our two brick and mortar cinemas) may be as we wait to find out what happens at our two theatres as they reopen.

In 2022, I will continue this series of posts for Flow and talk about how our theatres are continuing to respond to the pandemic following our re-opening.