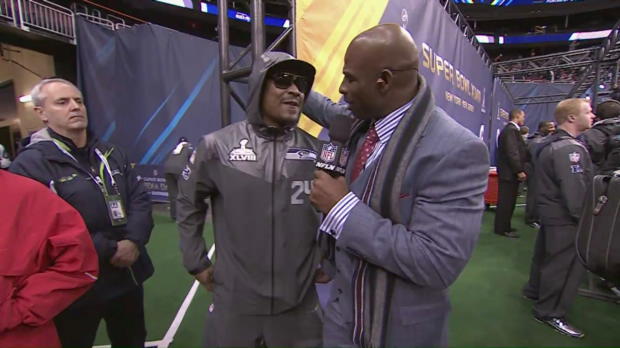 During Super Bowl XLVIII’s Media Day, Seattle Seahawks’ elusive running back Marshawn Lynch exited his mandatory press conference after only six-minutes and twenty-seconds (of a sixty-minute timeslot) to the surprise and dismay of reporters and media outlets gathered for the event. His brief appearance was to avoid a potential $100,000 fine by the NFL for noncompliance of the league’s policy that players engage in “reasonable cooperation with the news media” during the pre-Bowl event.[1] Later that day, as he stood at the edge of the step and repeat banner surveying the sports media spectacle around the championship game, Lynch was approached by football Hall of Fame cornerback turned NFL Network analyst Deion Sanders. The interview-averse Lynch allowed Sanders, with camera operator in tow, to draw near him and improvise a conversation about his excitement for the upcoming game. Asked about his shy demeanor and disinterest with the press, Lynch responded to Sanders’ questioning of his silence with the iconic “show, don’t tell” retort: “I’m just ‘bout that action, boss.” Their endearing two-minute exchange highlights why Lynch is still a fan favorite as well as why his stonewalling sentiments and telegenic qualities make for a challenging and captivating media spectacle.

In this column, I want to embrace and engage the exigent demands of Lynch’s challenging and captivating media persona. First, I want to broadly reflect on the televisual politics of Lynch’s defiant press conference performances.[2] Second, I want to briefly consider David Shields’ 2019 experimental documentary Lynch: A History, which culls a range of television footage and other media sources to interrogate race, sports, and American media through the unruly personality and enigmatic persona of the football star.

A former Cal Golden Bear and 5X-Pro Bowl running back who won a Super Bowl title with the Seattle Seahawks in 2015, Lynch is known for his emblematic and epithetic “Beast Mode” brand, on and off the playing field. An Oakland native, he captured sporting acclaim with his unstoppable ability—in his words—to “run through a motherfucker’s face” to get to the end zone. A sensational athlete, Lynch gained widespread notoriety off the gridiron for his mediagenic resistance: a surly and sardonic demeanor and an increasing disengagement with sports journalists during mandatory press conferences. During press conferences, Lynch repeatedly stonewalls or signifies, redirecting their questions with short, terse phrases about other topics or gives no explanation or further clarification for his withdrawn behavior. For example, before Super Bowl XLIX, Lynch tells reporters at press day: “Hey, look. I mean, all I week I done told y’all what’s up and for some reason y’all continue to come back and do the same thing that y’all did. I don’t know what story y’all trying to get out of me… So y’all can go and make up whatever y’all want to make up because I don’t say enough for y’all to go and put anything out on me.” In this moment, Lynch’s press conference performance is a rebuke and rebuttal, chastising a media clamoring to engage with him only on their terms and for their benefit. Lynch’s monologue continues: “I’ll come to y’all event and y’all shove cameras and microphones down my throat, but when I am at home in my environment I don’t see y’all. But y’all mad at me.”

One of Lynch’s most famous press conference exchanges came during the 2015 Super Bowl media blitz where he responded to the barrage of reporters with the repeated (and now officially trademarked) refrain: “I’m just here so I won’t get fined.” Black athletic refusal to “play along” underscores how Lynch enacts a symbolic and political noncompliance, a mediatic moment that serves as a rupture in Black sporting iconicity—I will not perform as you so wish. His calculated defiance cast him within a sporting and televisual continuum of Black athletic refusal from Tommie Smith and John Carlos to Colin Kaepernick and Eric Reid to Naomi Osaka and Simone Biles. His strategic press conference mutism is not an example of conservative reticence desired by those who hope Black athletes just “shut up and play.” As critic Hua Hsu underscores in The New Yorker: “Lynch’s [profound] silence came to register as an expression of power—a way of controlling his own narrative by refusing to offer one.” His resistant actions during that press conference and others function in stark contrast to his media celebrity. Lynch regularly appears on TV commercials and late night shows and has had guest roles on Westworld, Brooklyn 99, Bar Rescue, and The League, among other programs. Lynch’s televisual silences and refusals (he famously sat for the US National Anthem and stood for the Mexican national anthem in 2017), therefore, operates as a tactical refusal and/or reversal of sports television’s industrial complex that mandates telegenic personalities and treats athletes as trained seals who must bark answers at the crowd of journalist. Under the scrutiny of the press, his radical noncompliance, disgruntled silence, and elliptical curtness enacts a televisual politic at once singular and collective, one enmeshed with historical discourses of resistance grounded in the politics of place, race, and sport in public life and the public’s imagination. 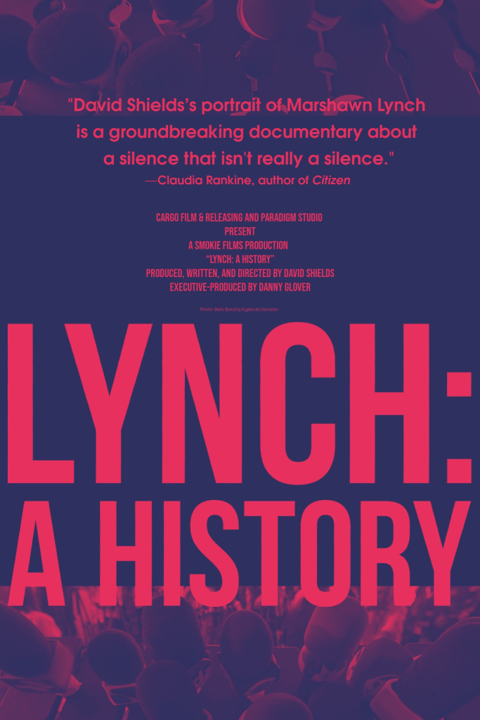 Lynch’s dynamic televisual politics are the subject of David Shields’s experimental sports doc, Lynch: A History, about the football player and the physical and symbolic violence of not only the sport but also American society. As a character and catalyst, Lynch functions in the documentary as an iconoclastic historical and media contestant. The collage film is a compilation of seven hundred found footage clips from a range of television and media sources including interviews with Lynch and others, game footage, television commercials, news reports, film clips, cable news programming, fan videos and YouTube clips, and even stills from Lynch’s favorite book Dr. Seuss’s The Cat in the Hat. The documentary also includes haunting footage of state and vigilante murder of Black people and acts of police brutality. Examining the politics of place, particularly Oakland as a refuge and reservoir of militancy, revolutionaries, radicals, and the birthplace of the Raiders professional football franchise, Lynch: A History collates television footage of Black resistance within a wide field of physical struggles and sporting and social movements. Blurring media and sports worlds, the film’s style of multi-format visual blitz creates a visual ecology of US racial history and our contemporary experience of image and information consumption within sport and media’s matrices of profit and distribution.

This film positions Lynch as a cipher and allegory, athletically moving us through televisual and other related media-content via montage where the metric, dynamics, and tonal aspects of each shot and scene reverberate in concert and discord against and alongside each other. The spectacles of sports, commentary, violence, entertainment, consumerism, white supremacy, police brutality, Black death, geopolitical issues, and sporting celebrity share a sensorium on screen in much the same way they do in our lives. As a result, Lynch’s sporting blackness becomes the linchpin of the film, a raced form and formation that dictates, directs, and diffracts meanings and, as the documentary’s title suggest, the racial formations of an American history. Shields’ documentary is a representational history of Lynch’s media persona but also one of our collective mediated experience. As a result, the documentary—like Lynch’s press conferences—resonates and echoes an insurgency by showing and not just telling us who—or better yet what—Lynch is all about. And this is significant for a football star who has repeatedly us: “I’m not about to say nothing.” Or, to playfully rephrase Ralph Ellison’s allusive question in Invisible Man in Lynch’s terms: “who knows but that, on the lower frequencies, I do not speak for you… because I’m just ’bout that action, boss!”[3]