A few weeks ago, a fandom quiz floated by my fan-centered social media feeds titled “Which Old School Slash Fandom Are You?.”[1] Its introduction read as follows, “Back in the days of zines and yahoo groups and hand-mailed fanfiction, a few fandoms reigned supreme. Which one are you?” Once completed, the quiz gave humorous descriptions of fandoms that were significant to anglophone slash fanfiction writing communities in the 1990’s and early 2000’s. These included older shows like the Star Trek franchise and The Man from U.N.C.L.E. (1964-68), as well as Due South (1994-99), and The Sentinel (1996-99), amongst others.

The Sentinel, perhaps being the most niche, seemed to attract the most curiosity from newer fans and in response, fans who had watched the show or participated in the fandom posted humorous recollections of the show itself – including questionable plotting and low-quality special effects. They also underlined its enduring legacy in fanfiction, the trope of the “Sentinel AU,” which was based on a throwaway line on the show but continues to have an afterlife in many fandoms even today. It even has a Fanlore page.[2]

A common refrain in many reactions to the ignorance about the original show and fandom was that “the youth” should know their history. While framed humorously in this case, the larger belief that younger/newer fans are unaware (and unappreciative) of the challenges faced by earlier online fanfiction communities is a common one. The challenges recalled most often underline the fact that writing and reading queer fanfiction carried real risk at the time.[3] Sometimes this came from cease-and-desist letters sent to fan writers, and sometimes from legal crackdowns against all queer content by hosting platforms. The most cited case of the latter being the Livejournal purge known commonly as Strikethrough.[4] In this narrative, the establishment of the fan-run Organization for Transformative Work (OTW), partly as a response to these challenges, is seen as a watershed moment. Both the OTW and its independent fanworks platform the Archive of Our Own (AO3) are also framed as unique spaces for all fans to celebrate, respect, and protect. A further implication is the warning that if this history is forgotten or undermined, fans will once again face the same threats with no recourse.

The aim of this article is not to question the importance of knowing fandom history, including the challenges I’ve just traced. It is also not to undermine the remarkable achievements of fan-led organization like the OTW, which has received widespread recognition, including a Hugo Award. What I would like to do, however, is illustrate how this narrative of fandom history is a partial one that works to obfuscate the fact that these these spaces have also been characterized by white-centricity, racism, and anti-Blackness from their inception. This aspect, often ignored in hagiographic retellings of the experiences of “fandom elders,” is a key way in which the effects of whiteness are invisibilized and made to seem neutral when it is, in fact, constitutive of these spaces.

Screenshot of fandom quiz “Which old school slash fandom are you?”

The reason I argue this is because no historical narrative is mobilized in a vacuum. The framing of queer slash fandom as primarily a space of resistance and point of queer connection and discovery for older fans (also characterized as perpetually under threat) is being made explicitly in response to contemporary critiques made around these spaces. While these critiques vary in legitimacy – some are undeniably influenced by ageism and misogyny – I am most interested in those that focus on the long history of fandom’s white-centricity and racism.[5] These are crucial interventions because only when racism is accepted as having always been part of queer fandom, instead of something that was a minor aspect or perpetuated by a few individuals, can the needle move on from current frustratingly cyclical conversations around what anti-racist work, if any, is possible in ostensibly progressive fandom spaces and institutions.

To return to the case of The Sentinel, a fact that is very rarely mentioned in humorous retellings of the show and its enduring legacy in decontextualized fanworks, is that its plot had, at its very core, an extremely problematic approach to non-white cultures and individuals. This encompassed the depiction of the indigenous people of Peru as the origin story for Jim Ellison’s (the main character) enhanced senses, the side-plots concerning protagonists of various racialized identities, as well as the actual appearance of “tribal” Peruvian characters in the later episodes. 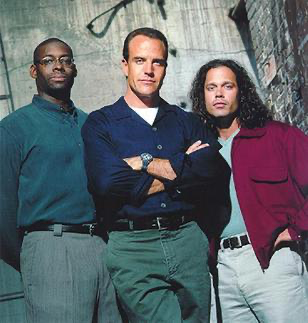 Cast members of The Sentinel played by Bruce A. Young, Richard Burgi, and Garrett Maggart.

Again, the racist aspects were not additional or extraneous to the show’s narrative but embedded in the worldbuilding. As someone who read the fanfiction first and came to the actual show later because of geographical accessibility issues, I was quite taken aback by the level of racism in the text because it certainly wasn’t an aspect that slash fandom even registered as problematic, let alone critically examined, in any significant way.

In order to explore this further past my own recollection, I also reached out to see if any other fans would share their experiences of these dynamics with me. Several people responded, and I quote some below. As a note, the fans who responded to me hail from different nationalities but all self-identified as white and under the queer umbrella.

“I do not remember any discussion of the problematic racial dynamics of the show at the time. In fact, until you mentioned it, I had completely forgotten about the Peruvian origins of Jim’s senses.” (Anonymous respondent)

“In my interactions at the time, I would say I never noticed discussion of any kind about the problematic racial dynamics. My impression was that rather than unpick racial dynamics the general tone in the fandom was vague to explicit fetishization of “the noble savage.” In looking at the show/fandom now, mostly in the “sentinel/guide AU” genre rather than the specific show, I have mostly felt that the origin of the “sentinel” has been…I guess whitewashed? Most AUs seem to elide the native Peruvian origin story in favour of large scale A/B/O style categorizing of individuals.” (Anonymous respondent)

“I cannot recall anyone ever saying anything about the racism or identifying it as such. I don’t recall ever hearing anyone talk about there being anything wrong with the concept of a white (US military!) hero who learns secret skills when he “goes native” in a “primitive jungle tribe.” As someone who’d grown up on colonialist literature about noble savages and such, none of it registered as racist with me at the time, and I don’t think any of my fandom mentors or friends ever suggested that it might be.” (Sinja)

Only one respondent, Derry, recalled some discussion around the racism in the text, in the context of the depiction of Simon Banks (Jim Ellison’s boss) who was played by Bruce A. Young, who is Black. However, this was a meta-critique and did not influence the larger fanfiction itself.

It is certainly true that the racialized origins of the “Sentinel AU” trope have been whitewashed. The Fanlore page offers no explicit acknowledgement of this fact, even though it indicates the use of “spirit animals” in the canon and fanon, which is an established marker of problematic cultural appropriation. While seemingly innocuous, this detail is illustrative of how racist tropes become decontextualized and normalized. Along with how the show and fandom are memorialized as perhaps a bit cringey but certainly something to be remembered with fondness, this further illustrates how whiteness works to invisibilize itself in fandom histories so that they can be read within a narrative of queer progressive politics that does not ask fans to reflect on their participation in and amplification of effectively racist structures.

These structures are not abstract but are embedded into the broader contemporary debates around what fandom is, who is included in it, and whose comfort and safety is prioritized in these ostensibly progressive and inclusive spaces. In fact, I would say that these framings of fandom history actively encourage fans to deflect from their complicity in these structures and frame all critiques of their spaces as ill-informed and bad faith attacks.[6]

So, yes, “the youth” should know their history, but perhaps it is time that “fandom elders” reckoned with theirs as well.