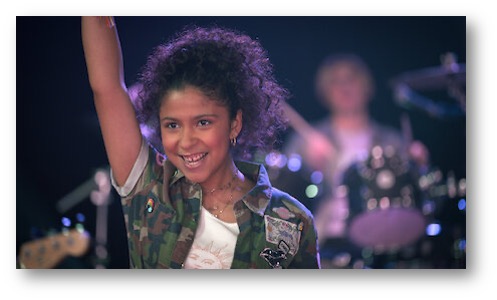 In the midst of the pandemic, I like millions of others spent a lot of time watching television. And the majority of programming options reinforced the findings of industry reports that Hollywood continues to tell stories and provide representations that reinforce white normativity – white producers, white writers, white directors, white actors – despite industry findings that more diverse casts and storylines perform better at the box office and in the ratings and meet demands by audiences for more diverse representations.

Always looking for programs that feature actors who look like me, an African descendent Puerto Rican/Dominican, and my mixed-race nine-year old son; we stumbled upon Netflix’s Julie and the Phantoms (2020-present) featuring Puerto Rican-high school student Madison Reyes in the lead role of a high schooler from a multiracial Latino family who is coping with the death of her mother by performing with a musical ensemble of ghosts. Like the first time my family saw African American/Puerto Rican Miles Morales as Spiderman in Into the Spider Verse (2019), that moment of pleasure and visual recognition was priceless for us, and it reminded me once again that representation matters. Representation matters because it is so integrally connected to how people understand the value given to particular identities.

If representations are important to how we make sense of ourselves and others, I began to question how mainstream media productions cast mixed-race or multiracial Black/Latinas? What does it mean that Black/Latinas are cast by either their racial identity or their ethnic identity but rarely both? And what might be the implications of the binary logic for the “symbolic construct” of authenticity in casting, a construct that is grounded in visual performances race and ethnicity that too often erase the complexity of mixed-race and multiracial identities and representations?[1]

Building on E. Patrick Johnson’s (2003) work on black performance and authenticity, where he cautions the “arbitrariness of authenticity…carries with it the dangers of foreclosing the possibilities of cultural exchange and understanding” – I explore Latinas and Latinx performances of Blackness and mixed-race identity in the contemporary context of anti-black racism and the emergence of mixed-race and multiracial demographics.[2]

Yet when it comes to popular media narratives, images, and actors of mixed-race or multiracial Black/Latinidad, the complexity of that diversity rarely makes it on to our screens.[3] Thus, I employ the “/” in Black/Latinidad rather than the hyphen of Afro-Latinidad to speak to the perpetual negotiations of living across racial, ethnic, gender, and sexual identities – identities that exists relationally with each other and against normative whiteness, brownness, and blackness. While the hyphen implies identities in comfortable existence, the slash evokes conflict, liminality, tension, and moments of disidentifications, moments that work “within, on, with, and against a form at a simultaneous moment.”[4] The slash of Black/Latinidad presents an opportunity to trouble notions of identities as fixed and explore the intersectionality of ethnicity, race, and gender in popular media.

Black Normativity and the Casting of Mixed-Race Black/Latinas

Mixed-race U.S.-born Black/Latina actors, especially women with dark-skin complexion, face a binary choice in casting options – to perform the role of African American characters or not perform at all. According to UCLA’s Division of Social Science 2021 Hollywood Diversity Report, opportunities for ethnic and racial U.S. minority women actors remain equally scare in film – with Black women cast in leading roles more often than Latina/x actors (13 to 4). Not surprisingly, the most common opportunities for mixed-race Black/Latina actors is to perform African American narratives. 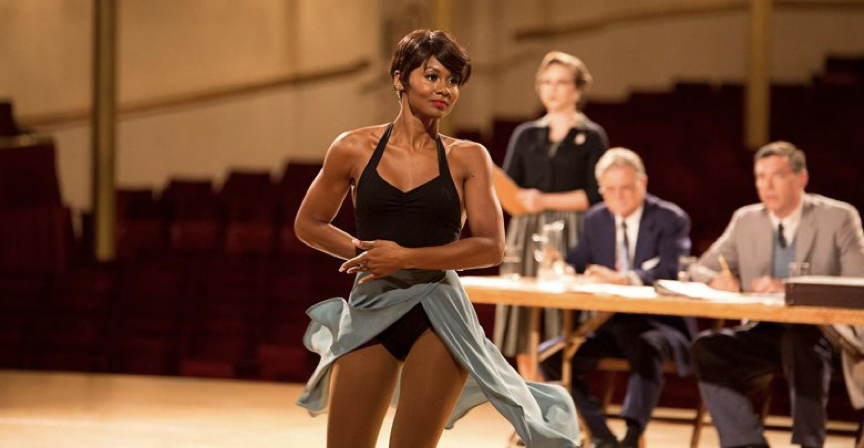 In an interview with the Los Angeles Times, Emayatzy Corinealdi commented that “The truth is I’m a black actress in Hollywood, and that’s hard,” she said. “But that doesn’t mean I have to live in that space. It’s our responsibility to try and change that, to do whatever we can contribute to make that change.”[5] Corinealdi broke into Hollywood performing the lead-role of Ruby, a nurse with an imprisoned husband living in Compton, CA, in Ava DuVernay’s Middle of Nowhere (2012). She won an “African-American Film Critics Association Award” for Best Actress, and she has gone on to costar as Miles Davis’ wife (Frances), in Don Cheadle’s biopic Miles Ahead (2015). Corinealdi has three TV projects in development in which she plays various Black characters.

Given the continued reliance within US culture on visual definitions of race and the one-drop rule that defines people with any African American heritage as black, the casting opportunities for Corinealdi are shaped by her racial and gender identity, subsuming any opportunities based on her identity as mixed-race woman of ethnic Panamanian descent. Like other mixed-race actors who are read visually as black, her racial and ethnic identities are placed in opposition to each other. Corinealdi has never been cast in an Afro-Latina or Latina role illustrating that while she has had increased opportunities, the range of those opportunities remains constrained by the casting politics of racial and ethnic authenticity.

Ethnic Normativity and the Casting of Multiracial Black/Latinas

Corinealdi’s experience reinforces Gina Torres’ observation that the world likes their Latinas to look Italian. Although white actors are perceived to be racially neutral and always afforded the privilege of performing any ethnicity, multiracial Black/Latina actors, U.S. born Latinas of African descent, are mostly afforded the opportunity to perform non-ethnic Black characters. The either/or tension in Hollywood’s casting practices for multiracial Black/Latinas speak to pre-existing intersectional hierarchies of power and difference, hierarchies that privilege some categories of identity while relationally marginalizing others.[6]

In the case of actors like U.S.-born Dominican/Puerto Rican Zoë Saldaña or Cuban American Gina Torres, Latina multiracial ethnicity is placed in tension with blackness despite what Tavia Nyongó argues is the “false dualism between blackness and Latinidad that is as untrue today as it was in the past and will be in the future.”[7] 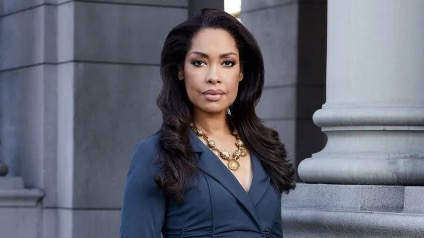 Gina Torres playing the role of Jessica Lourdes Pearson in Suits (2011-2016) and the spin-off Pearson (2019). Courtesy of USA Network.

After more than 92 acting credits, Torres as co-executive of USA Networks Suits’ spin-off Pearson, finally achieved her lifelong career goal of playing an “Afro-Latina” character: “I was very specific about reinventing Jessica’s mythology and making sure, for the first time in my life, I would actually be playing an Afro-Latina character,” she said, excitedly… I got to say, ‘this is who she is and we are going to reintroduce her to the world as a proud Afro-Latina character.’”[8] Coming in as the network’s lowest rated program in 2019, the Afro-Latina spin-off lasted only one season perhaps speaking to the power of U.S. ethnic and racial normativity that perpetually places blackness in tension with Latinidad.

In calling attention to normative performances of racial and ethnic authenticity, I am not questioning nor arguing against the need and demands by Black and Latina/o/x activists, audiences, and actors for visibility in front of and behind the camera, a demand that gained urgency under the confrontation with systemic racist of the past two years. However, I do want to call attention to normative visual expectations around ethnicity and race in casting culture. Torres’ complex desire, willingness, ability, and failure to perform a Latina ethnic identity and a Black racial identity reveals the edges of visually based notions of authenticity.

Black/Latinx Disruptions of Performances of Latinidad

Alongside the conflicts and tension of living across the slash, and performing in between blackness and Latinidad, the past three years have also created opportunities for showrunners, directors, and actors to depict what Muñoz termed a brownness that is “the ontopoetic state not only of people who live in the United States under the sign of Latinidad but of a majority of those who exists, strive, and flourish within the vast trajectory of multiple and intersections regimes of colonial violence.”[9] Thus, I would like to conclude with a reflection on representations and performances of Black/Latinidad that push back against normative depictions of U.S. Black and Latina/o identities, culture, and lives.

Pose (2018-2021), a series featuring the largest cast of transgender actors, gives voice to the lives of queer communities-of-color and their participation in New York’s 1980s ball culture. Featuring Black/Latinx actors in the lead roles, the series creates a path to perform the fullness of their reality – Black, Latinx, trans, and queer. Its queer Afro-Latino showrunner Steve Canals observed of the show, “I think that there’s this belief, somehow, that particularly for people of color – for black and Latinx people – that somehow our lives are just doom and gloom and bleak all the time … (a)nd the reality is no: we have lots of joy. And we have hopes and dreams and fears and aspirations, just like everybody else. It’s just important for the audience to know that our lives matter. And our voices matter. And that, regardless of the environment that we are living in, that so we have the right to dream.” 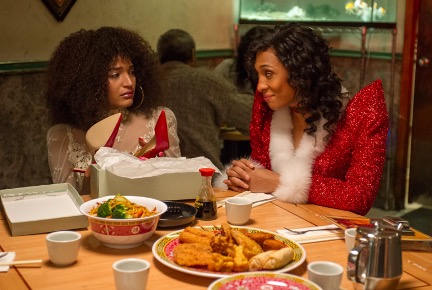 Pose presents a challenge to normative understanding of race, ethnicity, gender, and sexuality in casting blackness and brownness by making visible the multiplicities of identities for people who live within and across those categories. For MJ Rodriguez, who identifies as a trans-Puerto Rican woman of African descent, her lead role in Pose was transformational and vindicating:

And seeing a woman like myself strive and get the things that I feel like I’ve always wanted… It feels so good. I feel so seen. And I hope I’m giving inspiration to people out there. I know that I am, but I hope it’s even bigger. Because the more imagery of a person like myself, or any woman who’s in this kind of position, it just broadens the spectrum for people to understand we have what it takes to really achieve our goals in the industries that we decide to go into, specifically for myself acting and singing.[10]

Pose provides a space for Black/Latinx actors and audiences of mixed-race and multiracial African and African American descent to push against Hollywood’s normative representations of cis-Black and cis-Latina/o identity.[11] In doing so, the visual representations and narratives of Pose’s Afro-Latinx mixed-race and multiracial characters challenge their absence from Latinidad by insisting on being “seen” and push against their gendered exclusion from Blackness and Latinidad by insisting on having their “ethnicity” and gender identity visually recognized.

Programs like Pose, Julie and the Phantoms, and the growing number of shows featuring Black/Latina/x characters and casts that are able to occupy a racial and ethnic identity across gender and sexuality contribute to the disruption of the power of race as a “visual technology,” as a commonsense, yet unstable visual way of performing ethnicity and race in the United States and the Americas, a visual method that maintains white cultural and social power and privilege.[12]

The author would like to acknowledge the insightful and provocative conversations with Stephanie Perez and Ariana Cano that informed this essay; both are Ph.D. candidates at the University of Illinois Urbana-Champaign’s Institute of Communication Research.