Family Brands: From the Nelsons to the Kardashians
Cynthia Meyers / College of Mount Saint Vincent 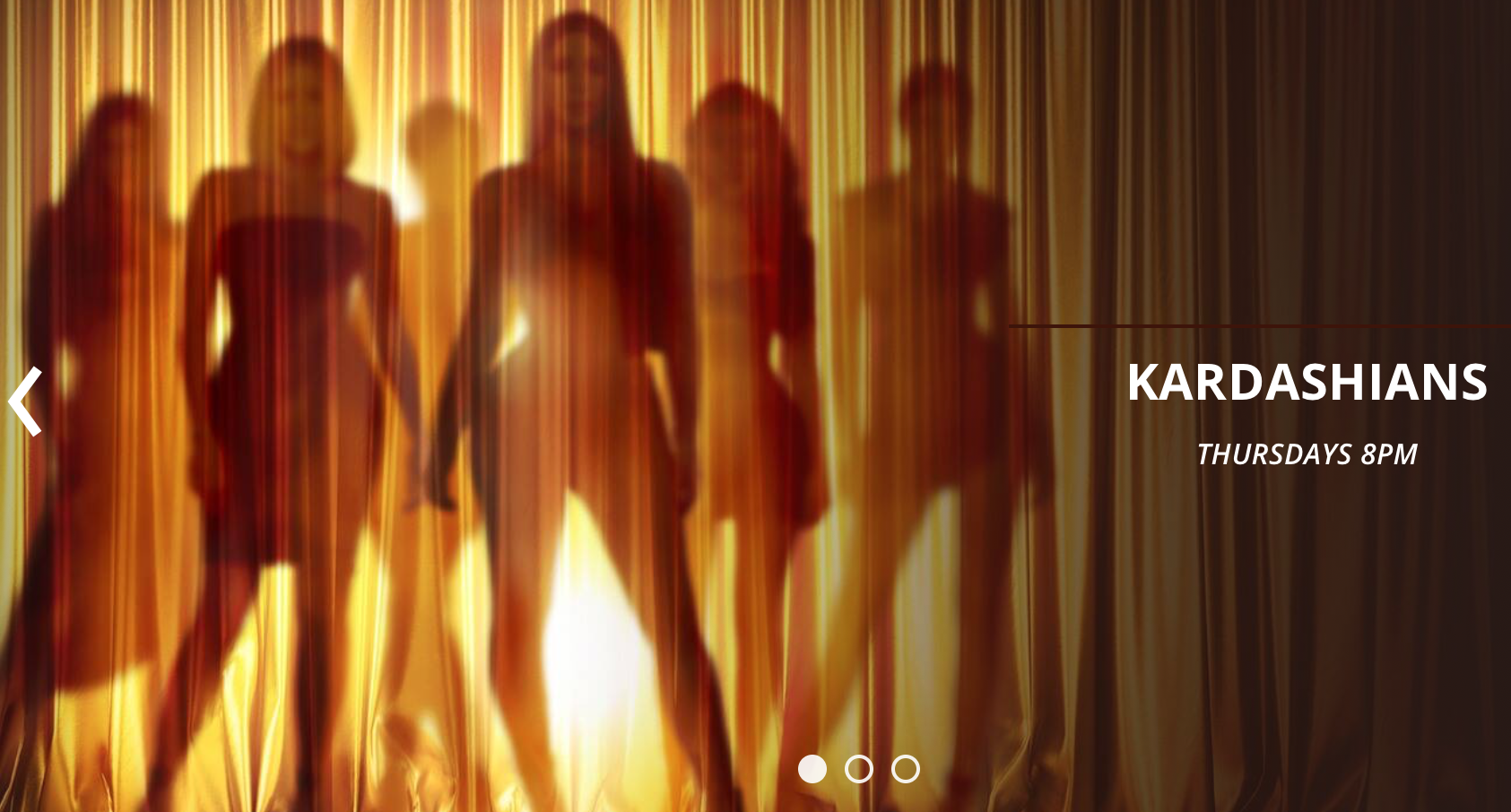 Keeping Up with the Kardashians, 2021 promotional image.

We all know about the Kardashian-Jenners: how they parlayed a proximity to celebrity and scandal into a series of television reality shows and then leveraged that exposure into a juggernaut of brand endorsements, product lines, social media superstardom, and cosmetic moguldom. Although there’s plenty to say about how this happened, they are also practitioners of what I call the “family brand”: members of a family become characters in entertainment formats, building a recognizable identity as a family, and then using that to commercialize that identification by endorsing brands, creating product lines, producing media content, and cross-promoting all of it.

The Kardashian-Jenners are far from the first family to exploit themselves in a reality show purporting to expose a “behind the scenes” actuality—other popular programs in this genre include The Osbournes (MTV, 2002–2005) and Gene Simmons Family Jewels (A&E, 2006–2012).  And today the family brand is a mainstay on YouTube; family vloggers such as The ACE Family, The Labrant Fam, Mazelee, and Family Fun Pack regularly present unscripted scenes from their daily lives, often structured as domestic sitcom narratives or as common YouTube genres, such as challenge, prank, slime, or shopping videos.

The ACE Family, “The Girls Do the No Budget Shopping Challenge!”

Often relying on child performers too young to consent, these media producers hope their audiences will ascribe a level of authenticity to their vlogs that they may find missing from conventional scripted television. Most of these family vloggers earn revenues from brand deals, product placements, and merchandise sales. We can watch the ACE Family shop at the Disney store and the Mazelees discuss an ice cream brand. Relying on a production style that Crystal Abidin calls “calibrated amateurism”—appearing amateurish enough to suggest credibility and authenticity yet in actuality careful and professional—these vloggers hope that audiences will be charmed by their cute children saying the darndest things, and that brands will make deals with them as “brand safe” content providers.

The family brand has probably been around for as long as entertainers have wanted to charm audiences. A vaudeville historian could no doubt point to many examples, such as the Five Kellys, a 1920s dancing “kid act” featuring a young Gene Kelly and his siblings. One of the most successful family brands of the twentieth century was the Nelsons. Ozzie Nelson, his wife Harriet, and sons David and Rick were stars of music, radio, and television from the 1930s until the 1980s and their television sitcom, The Adventures of Ozzie and Harriet (ABC, 1952–66) is remembered as the apotheosis of bland family sitcoms. 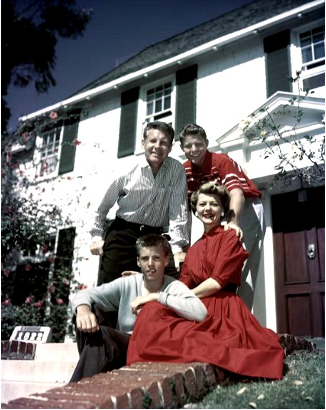 Ozzie, Harriet, David, and Rick Nelson in front of their home.

Though Ozzie Nelson designed his fictional eponymous character as lovably bumbling, often confused and incompetent, the real Nelson was a canny entertainer, producer, and writer.[1] He started out in the early 1930s as a touring bandleader who cross-promoted his paying live gigs by appearing for free on radio shows. To increase audience interest he hired a “girl singer,” the experienced vaudevillian Harriet Hilliard, who married him in 1935. The Nelsons’ musicianship was not as accomplished as other dance bands, so Nelson tried to make their musical performances more like “miniature musical comedies,” including joking patter about their marriage. In 1933 they performed on a weekly radio program, The Bakers’ Broadcast, produced by the ad agency J. Walter Thompson for the Standard Brands company to promote Fleischmann’s Yeast. Radio, Nelson believed, made the Nelsons seem more like familiar neighbors than distant celebrities; their radio performances were like “visiting people in their homes,” and Nelson believed that audiences viewed them “as friends as well as entertainers,” accessible and relatable.

By the mid 1940s, Nelson realized he could parlay their skits about family life into a radio show that he produced. The Adventures of Ozzie and Harriet premiered on CBS radio (1944–54) sponsored by International Silver. Since the Nelsons had stopped touring the previous summer, the premise was that they were leaving the entertainment industry to settle down with their two young children; this premise would provide many “fish out of water” situations as they learned to maintain a house rather than rely on hotel employees. At first, their two sons were played by actors, but by 1949 Nelson insisted on using his actual sons to play themselves. Nelson hoped that this would enhance the program’s versimilitude; he often claimed that the plotlines were based on their actual experiences. But even as they represented themselves as an ordinary white middle-class American family, the Nelsons were in fact hardworking professional entertainers performing scripted scenes conceived by Nelson and punched up by professional scriptwriters. In 1952 The Adventures of Ozzie and Harriet moved to television (the radio version continued until 1954), and Nelson was careful to integrate his sponsor Hotpoint’s kitchen appliances into the set and plotlines. 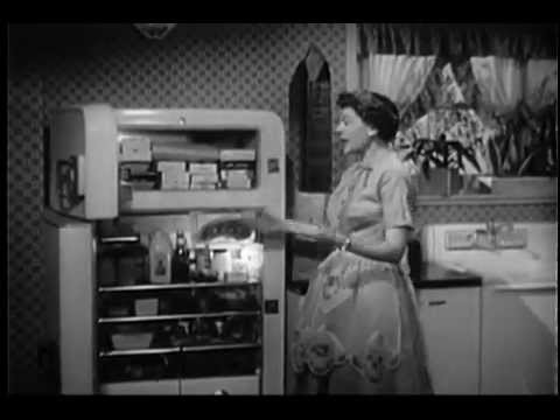 Though she was a veteran professional performer who in 1937 had voluntarily separated from her infant son in order to pursue her Hollywood film career, and she had a full staff maintaining her actual home, Harriet Nelson courted her audience by playing the character of a full-time wife and mother, devotedly preparing food and tending house.

Kodak, which became the show’s sponsor in 1956, expected the family to incorporate picture-taking and cameras into the program.[2] The opening of the program featured a son wearing a Kodak camera and the cast participated in at least one commercial per episode, as you can see in the opening minute of this episode, “The Bachelor.”

Although Nelson complied with Kodak’s directive that he include plot lines incorporating photography, as in the episode in which he takes a photograph of the neighborhood children with a pony, he had to fight off Kodak executives’ efforts to interfere in other ways. They disliked his father character, whose pratfalls and self-deprecating dialogue ran counter to Kodak executives’ expectations that father figures on television, which they considered to be a strong effects medium, should convey authority and command respect.

“The Pony,” excerpt, The Adventures of Ozzie and Harriet, Season 7, episode 4.

Having started his entertainment career in popular music, in the mid 1950s Nelson was quick to identify rock ‘n’ roll as an up-and-coming genre. His son Rick showed interest and talent, so Nelson worked to build Rick’s music career by featuring him performing songs on the television program (in 1957 his first was “I’m Walkin’” by Fats Domino), signing him to a label, producing his recordings, and promoting him as a teenage heartthrob. Branching out this way was particularly useful as the Nelson children aged out of cute domestic scenes. Eventually, the program would include the son’s wives, maintaining the family’s fictionalized narrative. Rick Nelson’s twin sons would carry on the family tradition and become mildly successful music artists in the 1990s. 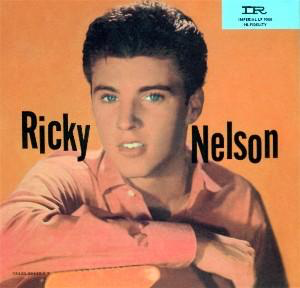 The Nelsons, then, were developing many of the same strategies later employed by the Kardashians to attract and appeal to audiences. Keeping Up with the Kardashians (E!, 2007–2021) at first styled itself as a jokey domestic sitcom, obvious in the opening titles featuring a backdrop of a suburban house. This type of image, visible in the Nelson program’s opening to signal suburban normalcy, is used by the Kardashians to signal the constructed nature of the program, as the image of the house as a backdrop falls “accidentally” and for comedic effect. 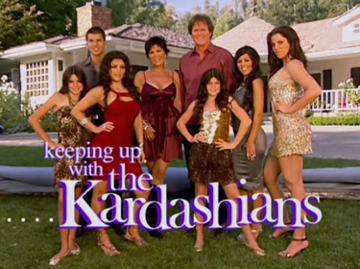 But the show’s strategy grows clearer in the first episode’s opening scene, featuring the mocking of Kim Kardashian’s rear end, setting up the reflexive self-deprecating humor that maintained audience sympathy for characters that otherwise lived a life far more rarified than theirs. Kris Jenner, the executive producer and “momager,” has liked to insist that the program simply captures her family as they are.  But though the Kardashians improvised their dialogue in actual homes while the Nelsons recited scripted dialogue on a set (identical to their actual home, Nelson claimed), both shows are clearly heavily produced. Both include predetermined story lines and scenes designed to build narratives about a family whose appeal rested in their ability to entertain audiences through constructed narratives of aspirational family life.

Original opening credits from Keeping Up with the Kardashians.

For both the Nelsons and the Kardashian-Jenners, despite the individual celebrity of different family members, the family’s (albeit mediated) interrelationships helped to establish and maintain their claim to audience attention. Maybe it would have been possible for Kylie Jenner to reach social media stardom and cosmetic empire moguldom without years of appearances as a character in the family dramedy, and maybe Rick Nelson would have become a pop star without his father’s open efforts to build him up as a teen heartthrob on the family’s sitcom, but I think it more likely that their success grew out of the family brand.

Audiences value authenticity, and what audiences deem to be “authentic” has changed over time. Today, the stilted dialogue of The Adventures of Ozzie and Harriet would no longer read as an authentic representation of family life, but for some large numbers of viewers, it seemed to work, maybe because of the aspirational yet achievable representation Nelson tried so hard to perfect. The Kardashian-Jenners have long ago left minor celebrity status behind and have ascended into the celestial sphere of billionaire-music-sports-television-social-media royalty. They thus risk losing the sympathy they so carefully cultivated through reflexive and self-deprecating humor and interfamilial conflict. Current viewers looking for glimpses of authentic family life, seemingly unscripted and real, may turn instead to the family vloggers on YouTube. Advertisers, in any case, will continue to thrive, as these family brands remain excellent promoters of products, merchandise, and services, drawing in audiences that aspire to join their families by joining in their brand consumption.

Image Credits: References:
tagged with 27.08, Advertising, Branding, Keeping Up With the Kardashians, Reality TV, The Adventures of Ozzie and Harriet, Volume 27