On one level, Bennett’s persona is a new iteration of an old formulation. In the tradition of figures like Phyllis Schlafly, she is a conventionally attractive blonde white woman who publicly advocates for conservative positions and gains notoriety because conservatism is typically thought of as being antithetical to the interests of women.[1] The political position Bennett takes is pro-gun, nationalist, anti-regulation, anti-communist, and in favor of the privatization of all services provided by the state, including public education such as public universities. Her platform is also enmeshed in the culture wars, hailing a supposed silent majority whose rights have allegedly been taken away by now-privileged minorities. Bennett’s opponents, by contrast, are classified as “leftist,” “Marxists,” and even “domestic terrorists.”[2]

Moreover, like other reality TV and documentary before it, Bennett’s footage stakes a claim as “a record of an event that has been minimally influenced by either the process of filming or the process of editing”[3], despite being selected from a broader body of video in the interest of constructing a narrative. That is, viewers don’t get to see the times that Bennett encounters people who can make a cogent argument. In this way, Bennett and her team are able to carefully construct her image, positioning her as an extroverted and sensual white woman capable of silencing her discursive opponents with the power of her rhetoric, an aspirational model for those who share her politics. This is how it looks as she emerges gracefully from an argument with a feminist who identifies her as a white supremacist or arguing with students who cannot back up their statements. This does important cultural work, as “by making the target the victim of disparaging humor, other group members can gain a feeling of group solidarity and cultural superiority” (Hobbs and Grafe), such that the videos work to consolidate in-group feeling among adherents of far-right politics.

What is new about Bennett is her participation in a group of social media personalities we’re calling reactionary influencers.[4] These micro-celebrities[5] combine reactionary politics and the social media influencer economy and include well-known figures such as Milo Yiannopolous and Richard Spencer. Some, like James O’Keefe and Steven Crowder, share Bennett’s “confrontations on video” format. Others, like Blonde in the Belly of the Beast, Lana Lokteff, and Faith Goldy, are also conventionally attractive white women. What they all have in common is that they use social media to reach new populations, largely youth, with the same old slogans repackaged as “edgy” content. As YouTube scholar Becca Lewis describes such influencers, “Blending the ‘glamour’ of celebrity with the intimacy of influencer culture, they broadcast gender traditionalism and performed ‘whiteness.’ In this way, influencers display the way they live their politics as an aspirational brand” (28). 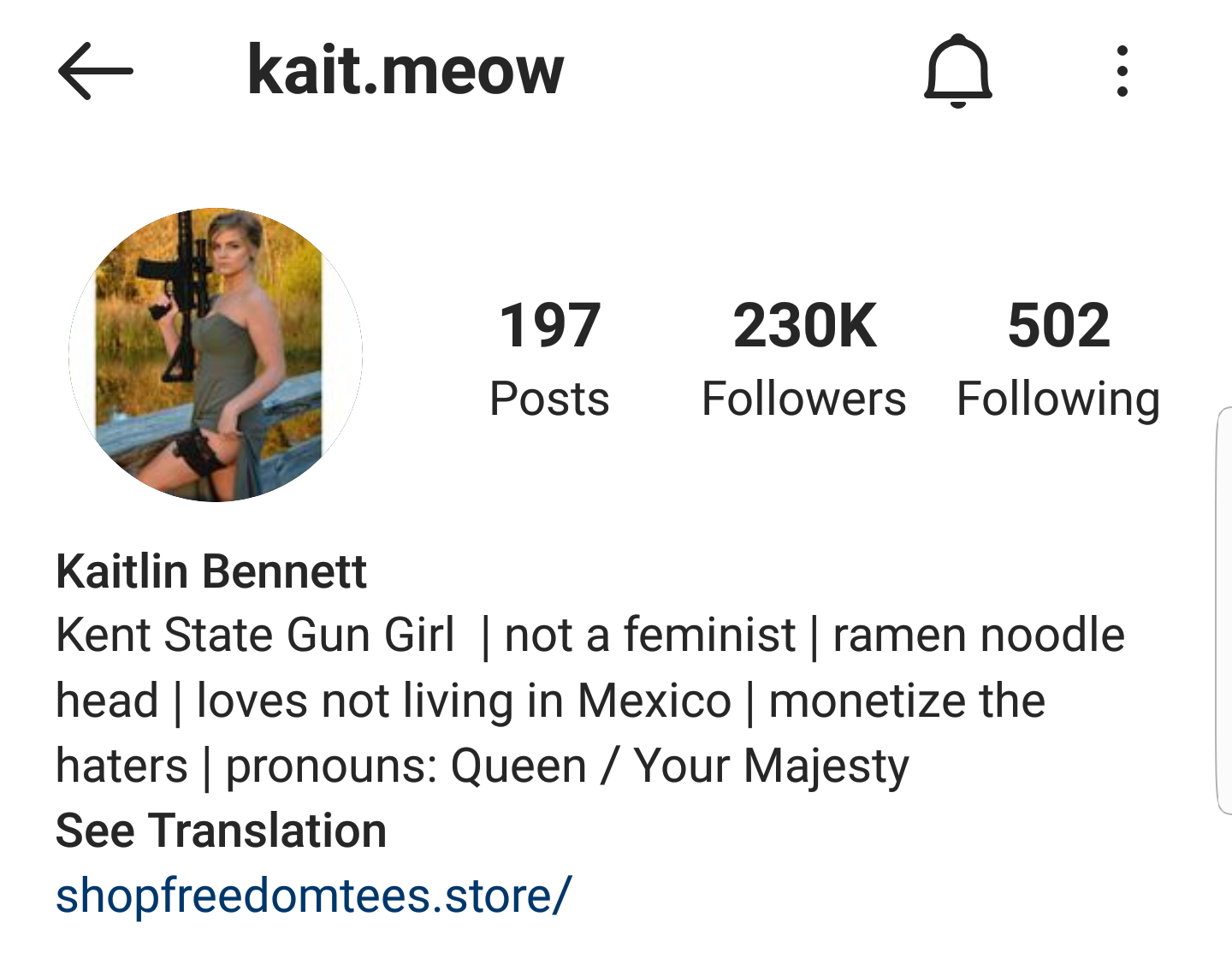 However, a seemingly curious thing happened in the midst of memeing her way into a lucrative career and intentionally sparking conflict: Bennett positioned herself as a victim “assaulted” by a “violent mob” that required her to leave UCF’s campus. We argue that this is the actual purpose of the reactionary influencer’s confrontational format—not saying the offensive out of a deep love of free speech, but out of a desire to provoke a negative response from allegedly overly-sensitive “snowflakes” that lets the reactionary influencer stage victimhood and call for the state to take action against opposing speech.

The tweet shows the true meaning of Bennett’s provocation tour of college campuses. She seeks not to exercise her own right to speech, but to incite counterspeech in order to enable its repression.  The “defund” framing is also no accident. As noted by Bakhtin[6] and later by Foucault[7], a text is inserted in a web of meaning and does not appear by chance, but when the right conditions exist for its emergence; moreover, a text is always dialoguing with and questioning other texts. #DefundUCF emerges in the context of summer 2020’s upsurge of calls to #DefundThePolice, constructing a university where people disagree with Bennett’s views as an institution that abuses the public with taxpayer funds by analogy to the police as an institution that abuses the public with taxpayer funds. While the use of tax funds for public goods such as education has been widely critiqued on the right for years[8], Bennett makes her case explicitly through the tactics of the reactionary influencer, combining the amplification of social media with a cultivated confrontation and the mainstream tendency to see white women as easily victimized. In this way, she seeks to bring the power of the state to bear against speech she disagrees with, while alleging that her own speech is the one being harmed.