From Hate Hoaxes to Circulatory Terrorism: The Case of #NotAgainSU
L. Corinne Jones and Mel Stanfill / University of Central Florida 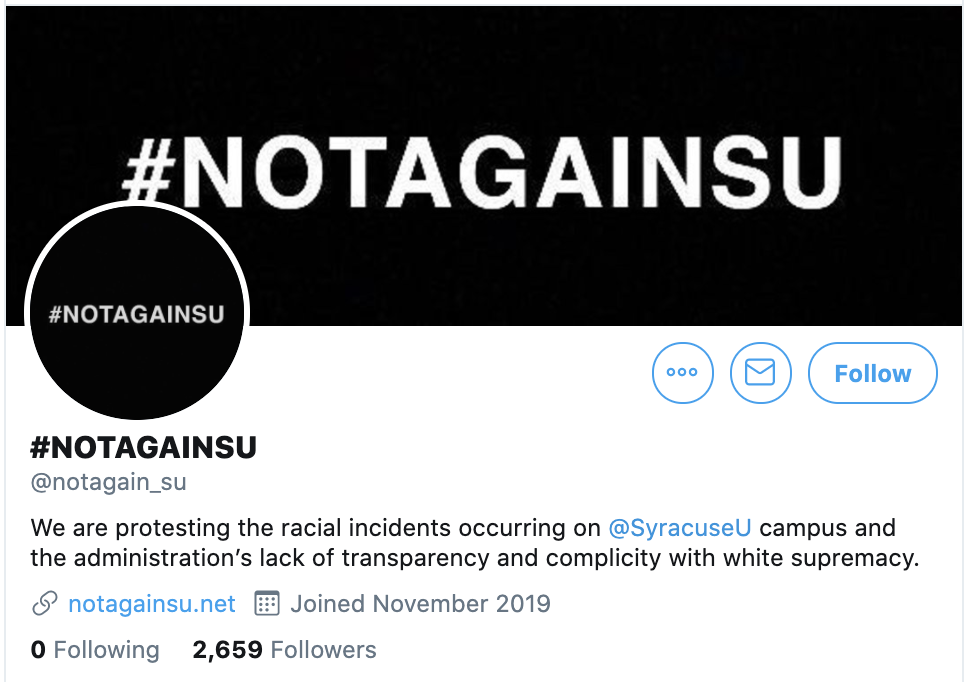 On November 19, 2019, news reports began to emerge that the white supremacist manifesto of the March 2019 Christchurch, NZ mosque shooter had been mass distributed to students at Syracuse University via Apple Airdrop as well as posted on Greekrank.com, a website where users rank Greek organizations and post anonymously. These alleged incidents occurred against the background of previous racist graffiti targeting Asian and Black students and the discovery of two swastikas. The earlier events had spurred the creation of Black student-led organization and hashtag #NotAgainSU as well as protests demanding accountability for the perpetrators, diversity training for faculty, staff, and students, and clarification of the anti-harassment policy on hate speech, and this existing activism made #NotAgainSU central to the response to the manifesto.

If stories of hashtag activism are now ubiquitous, one thing that the development of #NotAgainSU emphasizes is that crossover into mass media is still essential for building awareness at scale. National news organizations soon reported on the manifesto, and Twitter users exhorted SU alum and then-presidential candidate Joe Biden to use his platform to raise awareness. By noon on November 20, Biden had tweeted calling to “stand up together as a country against racism and bigotry” and linked to a CNN article about the hate crimes. Soon after, fellow presidential candidate Kamala Harris tweeted with the hashtag #NotAgainSU and linked to a Daily Beast article. Both tweets generated significant engagement, amplifying the issues and, with the #NotAgainSU hashtag, the work of the protesters. Hashtag activism is valuable because it spreads more quickly than news media sources and lets activists frame their own narratives,[1] but news media attention has historically been a key strategy through which protesters gain attention,[2] and #NotAgainSU bears out the ongoing benefits of leveraging the news–though, as Whitney Phillips notes, this runs both ways; mass media can also amplify alt-right narratives.

However, #NotAgainSU also demonstrates that the model of using social media to drive awareness of activist causes is not as simple as it’s often made out to be. While high-profile tweets can bring national attention to a cause, they can also bring negative and delegitimizing attention to those causes. For instance, on November 21, right-wing journalist Andy Ngô, known for his close coordination with violent white supremacists, also tweeted about #NotAgainSU, saying the manifesto “was a hoax,” linking to a CBS article which called the manifesto “likely a hoax.” Ngô’s claim of a hoax was retweeted 1.7K times. (For comparison, Harris’s tweet was retweeted 541 times, and Biden’s 1.3K times.) In addition, commenters on Biden’s, Harris’s, and Ngô’s tweets alike sought to delegitimize students’ fear as not credible and cast them as overly sensitive. If there is much emphasis on how social media let activists get the word out and democratize information-sharing, the ways they equally allow false information to get out are usually treated separately, as in discussion of how social media platforms spread conspiracy theories, rather than seen holistically that both are usually happening at the same time in any given flashpoint.[3] However, looking at the Syracuse case we can see that tweets raising awareness of the manifesto and contesting its contents went hand in hand with delegitimizing counter-discourses.

Third, and we’d argue most importantly, #NotAgainSU shows an emergent social media phenomenon we’re calling circulatory terrorism, in which talking about the existence of violence produces the harm the violence was intended to cause, irrespective of the truth of the social media information. This is similar to what Phillips calls “the oxygen of amplification,” in which journalists reporting on the alt-right raised its profile, as well as arguments that the circulation of videos of the extrajudicial execution of Black people in order to raise awareness causes trauma, in the sense that sharing is a source of harm, but it’s different in that we argue the harms of sharing can be uncoupled from the actuality of the source. As suggested above by Ngô’s tweet, there was doubt about the distribution of the manifesto; about four hours after Harris’s November 20th tweet, SU student newspaper The Daily Orange reported that the University’s Chancellor had said that the Airdropped manifesto was “probably a hoax” because law enforcement officers were unable to locate anyone who directly received it. However, the perception that the manifesto had been sent, and the implicit threat contained in the manifesto, had caused actual tweets that spread the perception that it had been sent, doing the harm that sending the manifesto would have been intended to do. Though SU claimed there was no direct threat to campus, students fled, fearing impending violence. If (domestic) terrorism is defined by the FBI as “violent, criminal acts committed by individuals and/or groups to further ideological goals [ . . . ] such as those of a political, religious, social, racial, or environmental nature,” cultivating fear of violence can further those same ideological goals, which is what happened in this case. Thus, while Biden and Harris’s tweets raised the profile of the protests and were helpful to the cause in that sense, they also participated in spreading the fear that the manifesto itself would have caused.

One major response to reports that the manifesto was being considered a hoax was to put it into the context of other alleged “hate hoaxes.” The response that appeared immediately underneath Ngo’s tweet linked to a map of “hate hoaxes,” and Biden’s and Harris’s tweets also received similar replies. Though less than one percent of reported hate crimes are false, these comments suggested that “hate hoaxes” are common. On one hand, this is a recursion of the perceived circulation problem—just as the real circulation of tweets did the harm the manifesto was intended to do, independently of the actual circulation of the manifesto, so too did tweeting about fake hoaxes create the same effect of undermining confidence in the harms of hate crimes as if the hate crimes really were fake.

But on the other hand, and perhaps most interestingly, the concept of circulatory terrorism suggests that because hate crimes can cause terror whether they are real or not, there may be no such thing as a hate hoax. In particular, while some such alleged hoaxes are events that were reported but didn’t occur, or were created by the false victim, as much as 30 times as many are real instances of swastikas, cross burnings, etc. that are claimed to have been jokes or pranks and not “really” evidence of hatred.[4] Importantly, public opinion and the law are much more ready to recognize that threats of violence cause harm regardless of their veracity when the terrorism in question is not white supremacy. Witness at least five men charged with making terrorist threats after so-called pranks that involved coughing on people or licking objects while pretending to have COVID-19[5] as well as arrests over school shooting “jokes” and jokes about Islamic terrorism. Thus, the idea that a representation of violence might in fact be violence when it produces the same fear response as violence itself is, while not universally accepted, certainly accepted in a variety of contexts.

It’s important to distinguish the manifesto’s perceived circulation from the perception of proliferating “hate hoaxes” in part because the manifesto’s perceived circulation enacted terror on systemically marginalized students, while spreading tales of “hate hoaxes” is rooted in the denial that any such pervasive marginalization exists. But they also differ because a white supremacist manifesto that didn’t actually circulate can’t be perceived as a crime in the same way that the false report of a hate crime can be, because the former upholds white supremacy and the latter contests it. In this way, much like the Trump administration downplaying the Department of Homeland Security’s conclusion that white supremacists are the leading source of homegrown terrorism, the contestation over whether the manifesto actually circulated is rooted in the drive to deny the existence and importance of white supremacy as violence.

Ultimately, the case of the manifesto and its response shows that, though hashtag activism may be democratizing, it can also enact circulatory terrorism in which, regardless of the truth, the circulation of reports of violence enact the harm the violence was meant to create. Recognizing such circulation as circulatory terrorism thus calls for taking a hard look at how it is supported by the structures and incentives of social media platforms. Much like recent controversies over Facebook’s tendency to polarize and YouTube’s radicalization pipeline, a platform designed to attract as much attention as possible, regardless of the content, can do harm when what it circulates is information about a hate crime. Furthermore, at the same time that there have been controversies over social media platforms profiting from advertisements on content like ISIS and KKK videos, the ways such companies actively “intensify” engagement to solicit more data from users and advertising revenue[6] on the content that drives circulatory terrorism deserves the same attention.