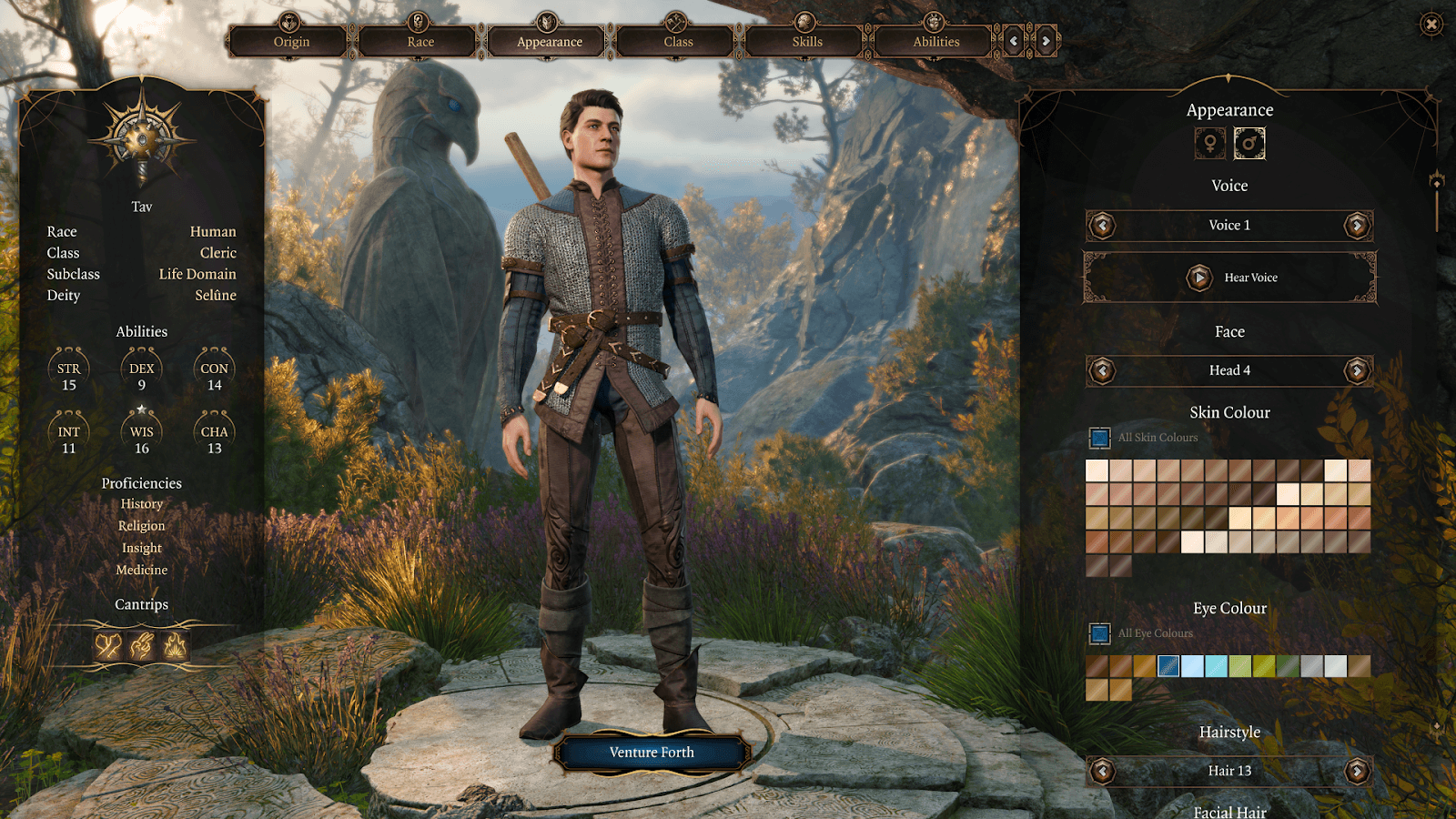 Larian Studios critiqued their players for producing this avatar via their most common character creation choices. Image via Larian.

Following the recent early release of Larian Studios’ Baldur’s Gate 3 (BG3), the game’s creators leveled an unexpected critique at their players. The developers merged data from players’ most common character creation choices and found the result to be “the most generic dude possible.” The accompanying image shows a white male human with short brown hair, blue eyes and a typical square video game jawline, an avatar recognizable from dozens, if not hundreds, of other video games. In their company blog, Larian’s developers jokingly wrote, “What the hell guys. We gave you demon eyes, horns, and even tails. We are sorely disappointed. Go crazy. We worked hard on this!”

This light-hearted note refers to the developers’ careful attempts to include a variety of both fantasy and real-world representations in BG3. The game offers several in-game “races” or species like elves, githyanki, and tieflings. It also modeled character faces off real people of different ages and ethnicities to create over 150 different options. Journalist Ash Parrish, reporting on the early access game, additionally complimented Larian’s array of skin color and hair options, and how BG3 lets players use these in non-“canon” ways. For instance, Parrish was able to make a Black tiefling, even though these demon-born characters usually tend towards pink or red skin tones. 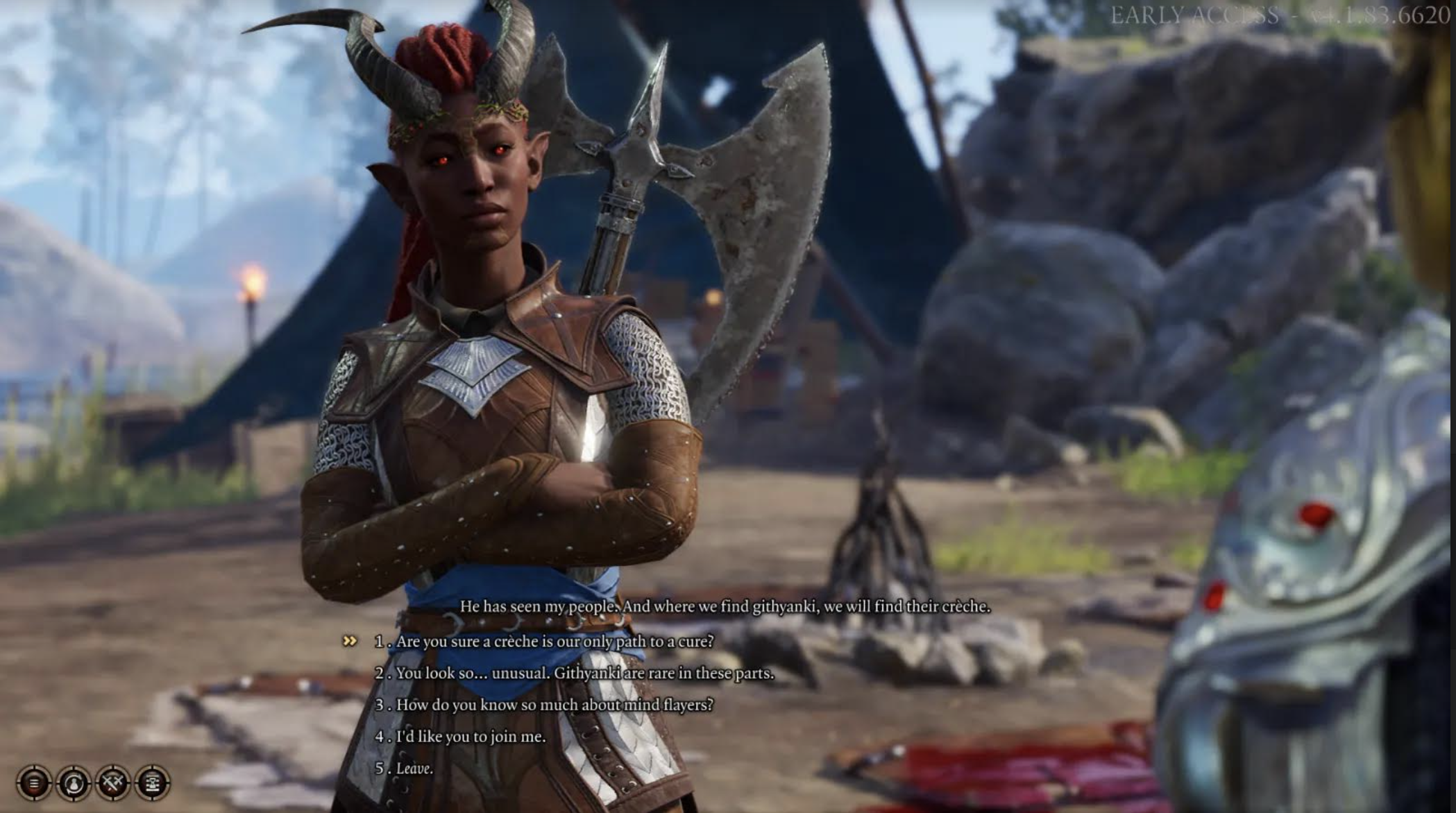 As we see in Larian’s “generic dude”, however, adding options doesn’t necessarily rethink the basic assumption that gaming and gamers tend to be male and white. BG3 thus presents a case study in how far games have come in their representations of race, as well as how far they still have to go. Extensive research has shown that games overrepresent white male characters compared to women and/or people of color (Williams, Martins, Consalvo, & Ivory, 2009). Underrepresented groups then adjust to this lack, considering representation “nice when it happens” (Shaw, 2014, p. 209) but not necessarily expecting it. Diverse character creation options give players the ability to push back against these trends and build avatars that resemble them (or that don’t, depending on preference). But stereotypes about gamers can still hold sway, resulting in generic avatars and suggesting an ongoing need for intervention.

Additionally, what many of the recent BG3 conversations don’t recognize is that issues of race in gaming go much deeper than skin color and hair styles. Game designers and players also need to remain attentive to the use of the term “race”, how real-world ethnic stereotypes influence games, and how well-known texts can come to dominate representations within a genre.

As media scholar Melissa Monson (2012) points out, using “race” to describe species “draws upon and reinforces the preconceived notions of a race-based society” (p. 54). In short, dividing characters into “races” and assigning them different characteristics essentializes race and reinforces its use as a central organizing factor for broader societies and cultures. Monson uses the example of World of Warcraft, pointing out how the player’s choice of race determines “one’s geographic starting point, physical appearance, skill set, talents, intellect, temperament, career (class), language, technology, and culture” (p. 57). Races possess unique physical, personality, and behavioral characteristics that prevent any overlap between them. Race thus becomes a static, biological construct, in contrast to the real world where it is better understood as socially and culturally constructed. 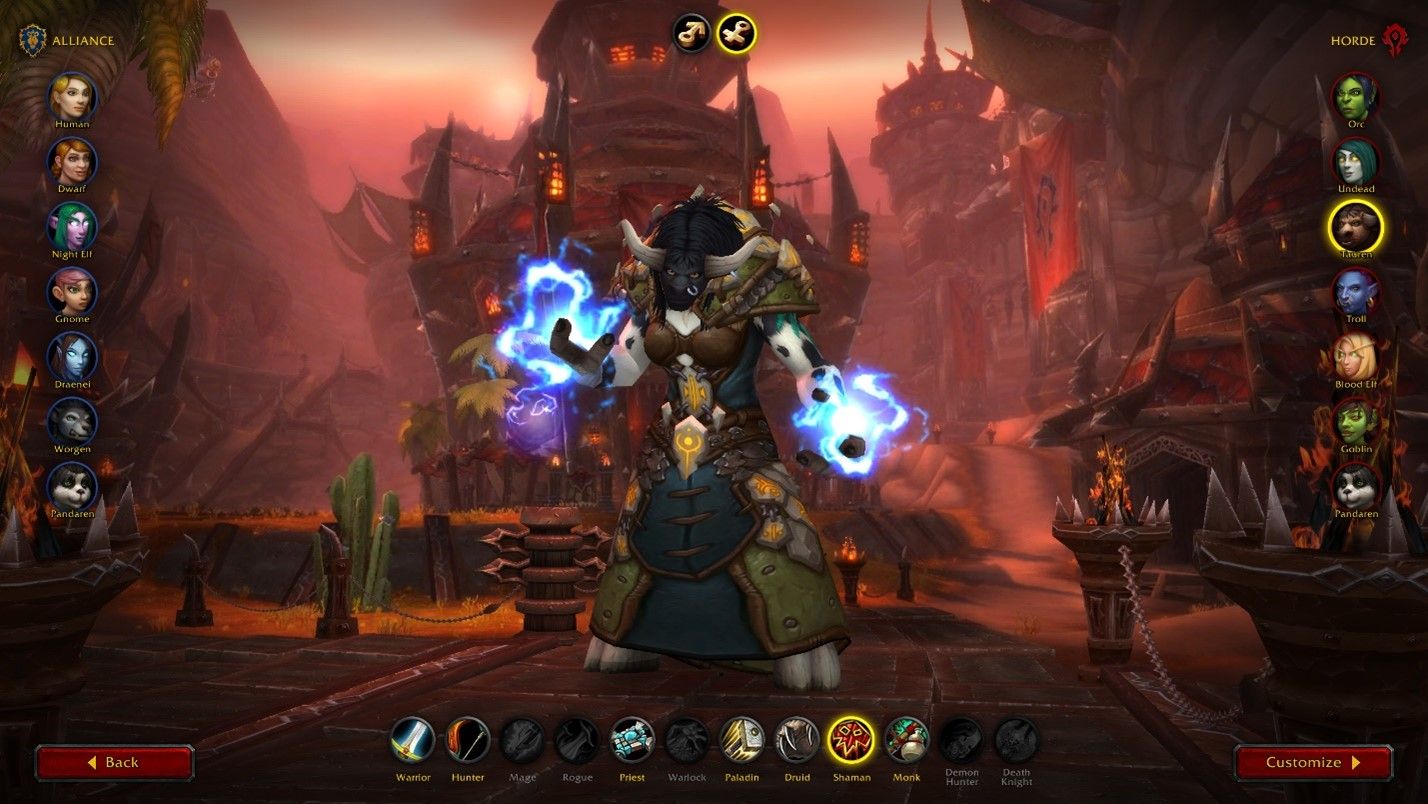 World of Warcraft’s character creation screen as of the 2020 Shadowlands expansion. Note the grayed out class choices at the bottom, showing roles that are not available to tauren. Image via MMORPG.com.

Games’ tendency to draw on a handful of prominent texts as inspiration potentially worsens stereotyping, as many foundational works contain racialized tropes. For instance, the Baldur’s Gate series developed out of the Dungeons & Dragons franchise, which itself emerged from existing texts such as the work of J.R.R. Tolkien, Robert Howard’s Conan books, or Edgar Rice Burroughs’s Barsoom series. While addressing all these influences is beyond the scope of a short piece, several examples of racial essentialism are immediately apparent. D&D races have different inherent skills, presenting them as biologically distinct. The series has also been criticized for its depictions of drow elves: dark-skinned, underground-dwelling elves who are primarily represented as evil.[1]

Considering Tolkien’s Middle Earth novels, numerous scholars have argued that Tolkien’s language and hierarchy of races (from elves to orcs) problematically associate blackness with evil and whiteness with good (e.g. Fimi, 2012; Rearick, 2004; Young, 2015). Other analysts have suggested Tolkien’s dwarves, which the author explicitly connected to Judaism and Hebrew, potentially extend anti-Semitic stereotypes (Brackmann, 2010). Of course, scholars do not fully agree about how to interpret Tolkien and his work, especially as several of his letters strongly repudiate anti-Semitism.[2] Further, although many people see a strong connection between texts like D&D and Tolkien’s novels, D&D creator Gary Gygax argued that any links were emphasized by players more than by the game itself.[3] The goal here is thus not to blame Tolkien (or any other individual or text) for issues of race in gaming and media more generally. Rather, it is to recognize the outsized influence certain sources wield so that developers can instead diversify their inspirations. 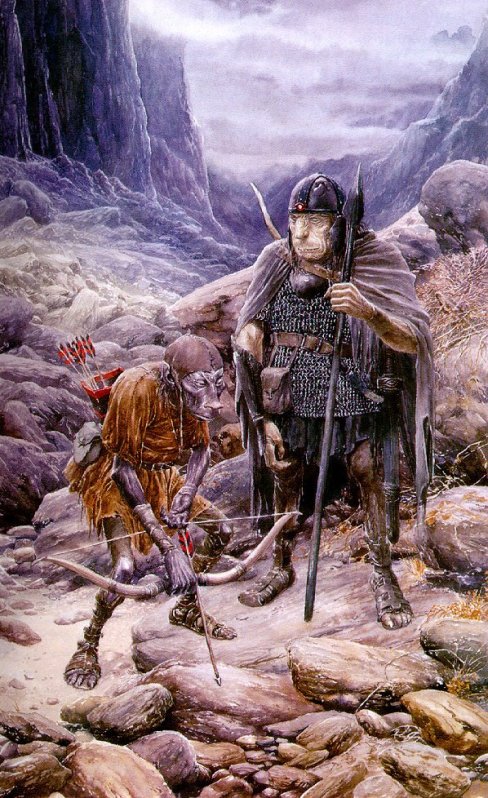 In an ongoing content analysis of games that offer players a choice of different character races, we (this article’s authors and co-researcher Emily Saidel) find that developers consistently draw on a narrow set of existing texts. Of eighty-four fantasy-based games in our sample, thirty have strong ties to Tolkienesque tropes. These range from the obvious—e.g. EverQuest’s humans, elves, dwarves, and trolls—to the subtler, e.g. the Elder Scrolls series’ Altmer and Bosmer elves or Orsimer orcs. However, many of these reinforce racial patterns from the source texts and from real-world stereotypes. For instance, the Elder Scrolls’ Black, Middle-Eastern inspired Redguard resemble Tolkien’s Haradrim and are characterized as naturally athletic and resistant to poison compared to other in-game human races (Hammar, 2015). The fact that over 1/3 of the games we have analyzed in this genre draw on the same inspiration is no doubt concerning, as stereotypical representations have consequences for viewers, fans, and broader culture.

That developers reproduce existing tropes is not surprising. Video games are a high-risk industry, leading studios to rely on proven ideas to increase a game’s marketability and perceived chances of success (Srauy, 2019). At the same time, some developers have successfully diversified their racial representations without loss of audience or profits. For instance, Dungeons and Dragons’ Fifth Edition (D&D5e) depicts a range of human races, and its developers turned to more wide-ranging texts for inspiration, including work by Octavia Butler, Ursula LeGuin, and Saladin Ahmed. D&D parent company Wizards of the Coast also recently announced that they will begin addressing some of the deep-rooted tropes underlying drow elves, orcs, and the Romani-inspired Vistani. Finally, Wizards of the Coast has reached out to more diverse player audiences, working to undermine the idea that D&D is primarily for white men. This multi-pronged intervention has driven D&D5e to great success. 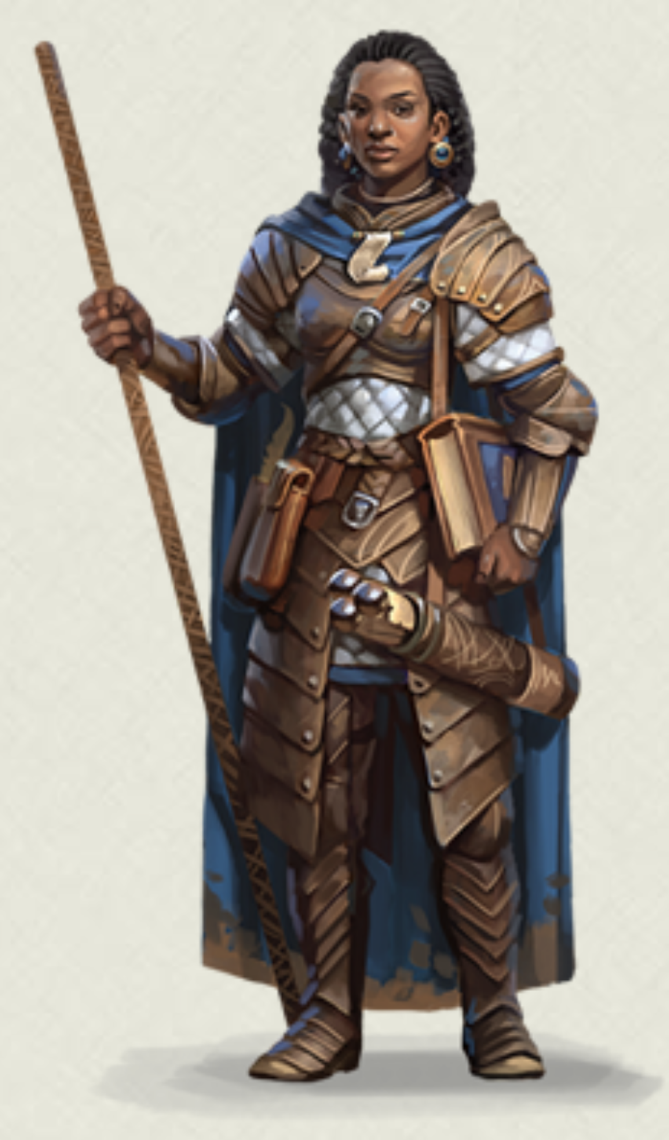 D&D5e depicts a Black woman as the main illustration for humans in the Player’s Handbook. Image via Wizards of the Coast.

Returning to the Baldur’s Gate 3 example, then, we can see that in-depth character creators are a start towards inviting more people to see themselves in games. Developers like Larian should be celebrated for their hard work in these areas. It’s also important to recognize that players have some agency and can push back against even stereotypical representations by embodying these roles in counter-stereotypical ways. But fully addressing questions of race in gaming requires more consideration of underlying inspirations and stereotypes as well. Further, while developers can take the first step, players also need to invest in reimagining game culture. As the generic white dude reveals, many gamers are comfortable with the status quo. Players and developers alike need to recognize that diversifying representation is not only a market benefit, drawing in new potential audiences, but a benefit towards how we understand the world as well. Gamers already believe (and some evidence suggests) that games allow them to build relationships, explore new perspectives and develop broader worldviews (e.g. Bourgonjon et al., 2016; Yee, 2014). Breaking out of limited, repetitive tropes will let players do so in more expansive ways.

Shaw, A. (2014). Gaming at the Edge. Minneapolis: University of Minnesota Press.