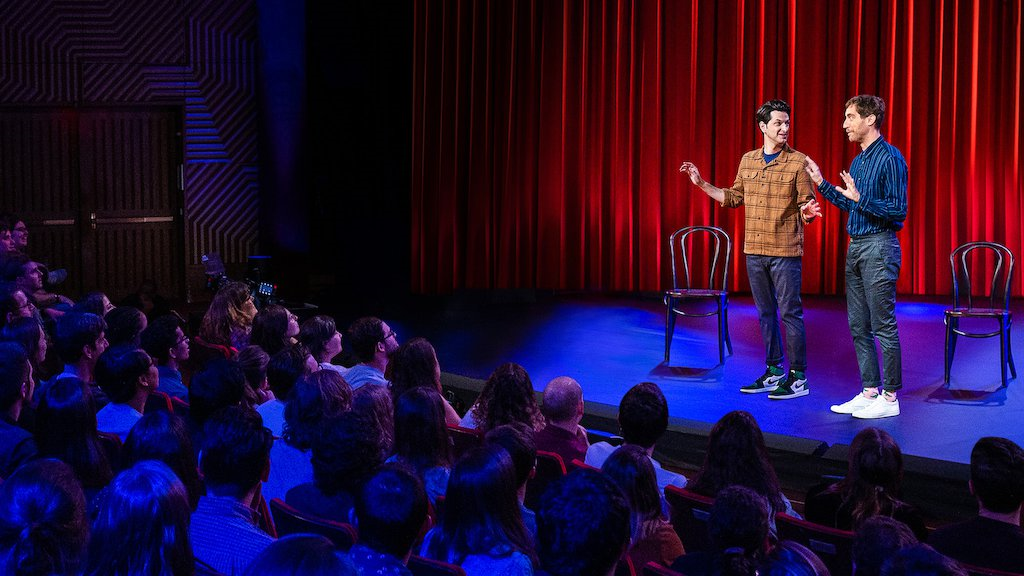 On April 21, 2020, a series of three comedy specials under the name Middleditch & Schwartz was released on Netflix. The comedy show, created and performed by the eponymous comedy pairing of Thomas Middleditch and Ben Schwartz, consists of tapings of theatrically performed long-form improv comedy. This is to say, Middleditch and Schwartz, following a brief discussion with an audience member as a starting point, completely make up an hour-long comedic narrative on the spot. While this may sound unlike any televised comedy special you have ever heard of, improv has enjoyed a lengthy history on- and off-screen. The form stretches back to the 1930s with the acting teaching of Viola Spolin at the Hull House in Chicago (where improv was not necessarily a comedy form, but an exercise in extemporaneous expression for the sake of less inhibited acting).[1] Improv would go on to serve as the backbone for multiple comedy institutions—The Second City, the ImprovOlympic (iO), and the Upright Citizens Brigade (UCB), among others. And while various members of these comedy communities have achieved successful careers in the entertainment business, rarely has long-form improv comedy been translated to film and television. 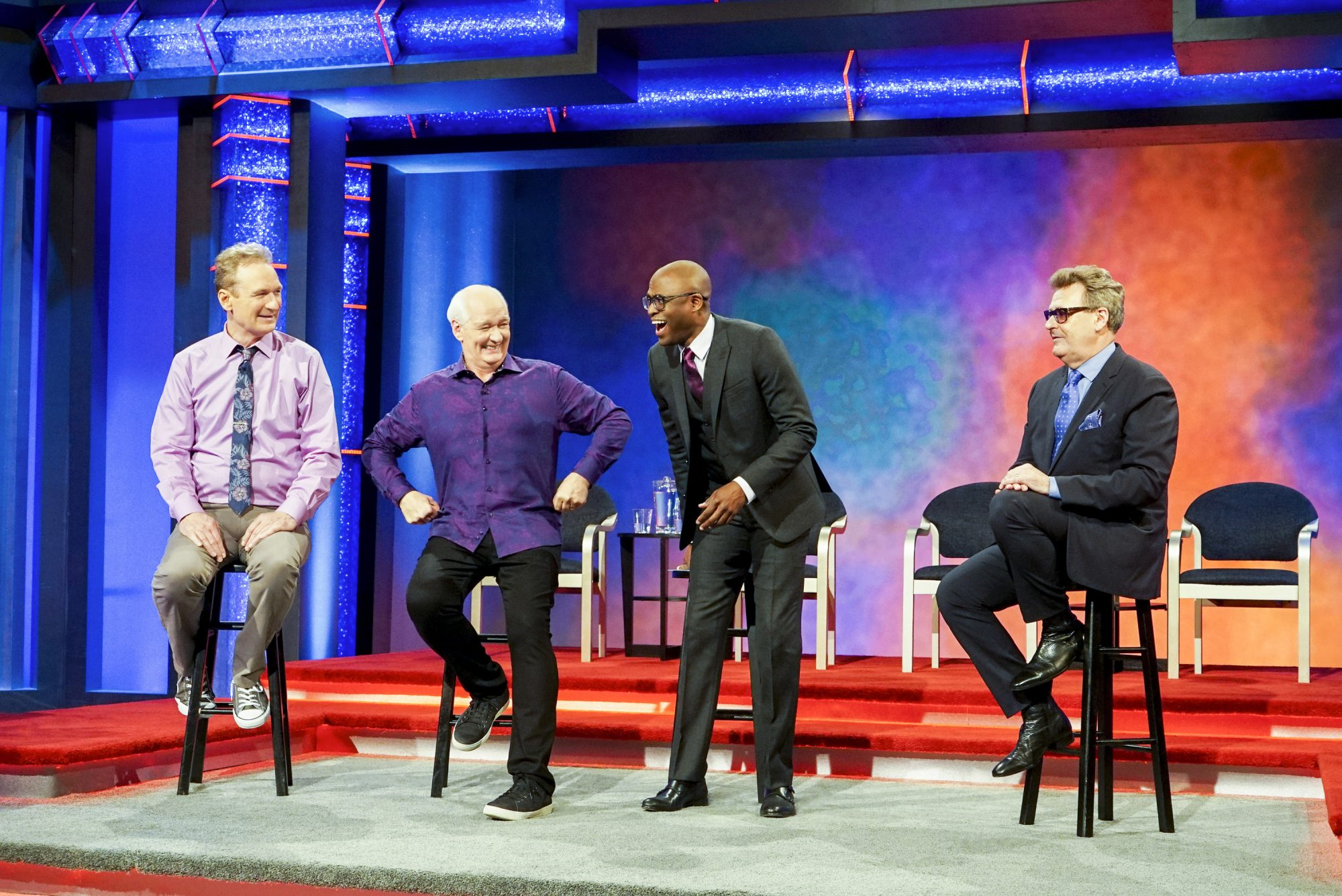 The most obvious defining element of improv is spontaneity. Improv scenes are constructed based on the fundamental principle of thinking on the fly. This is not to say that improv lacks structure—that is far from the truth. Long-form improv, according to the Upright Citizens Brigade Comedy Improvisation Manual, necessitates that performers find “the game” of a scene, which involves searching for an unusual aspect early on in a scene and then heightening by posing the question, “if this unusual thing is true, what is else true?”[2] Students at the UCB learn a variety of different structural formats for long-form improv, such as “The Harold,” in which improvisers construct three seemingly disparate narratives that coalesce at the end of the show.[3] Different improv theaters have their own philosophies on the construction of long-form improv. Nevertheless, all improvisers are taught how to structure scenes logically as they are making them up on the spot. Spontaneity is not attained at the expense of narrative structure.

In this light, it seems feasible to translate long-form improv into an episodic format. However, the act of getting a program like that green-lighted and financed has proven to be a difficult process. Schwartz, describing the pitching process for Middleditch & Schwartz, saw push-back when his answer to what the show would be about was, “We have no idea. It could be about anything.”[4] There is an understandable reticence to financing a show with no script and apparently no guarantee of structural integrity. This could explain why even shows created by institutions known for improv comedy, like SCTV (Global, 1967-79; CBC, 1980-83; Superchannel/Cinemax, 1983-84) and The Upright Citizens Brigade (Comedy Central, 1998-2000), opted for a sketch comedy format. Even The UCB Show (Seeso, 2015-17), which initially ran on an OTT network branded on its appeal to the “comedy nerd” crowd and, thus, would appear as the most conducive arena to market test an episodic long-form improv format, instead structured episodes with a mix of sketch, character-based, and stand-up comedy. 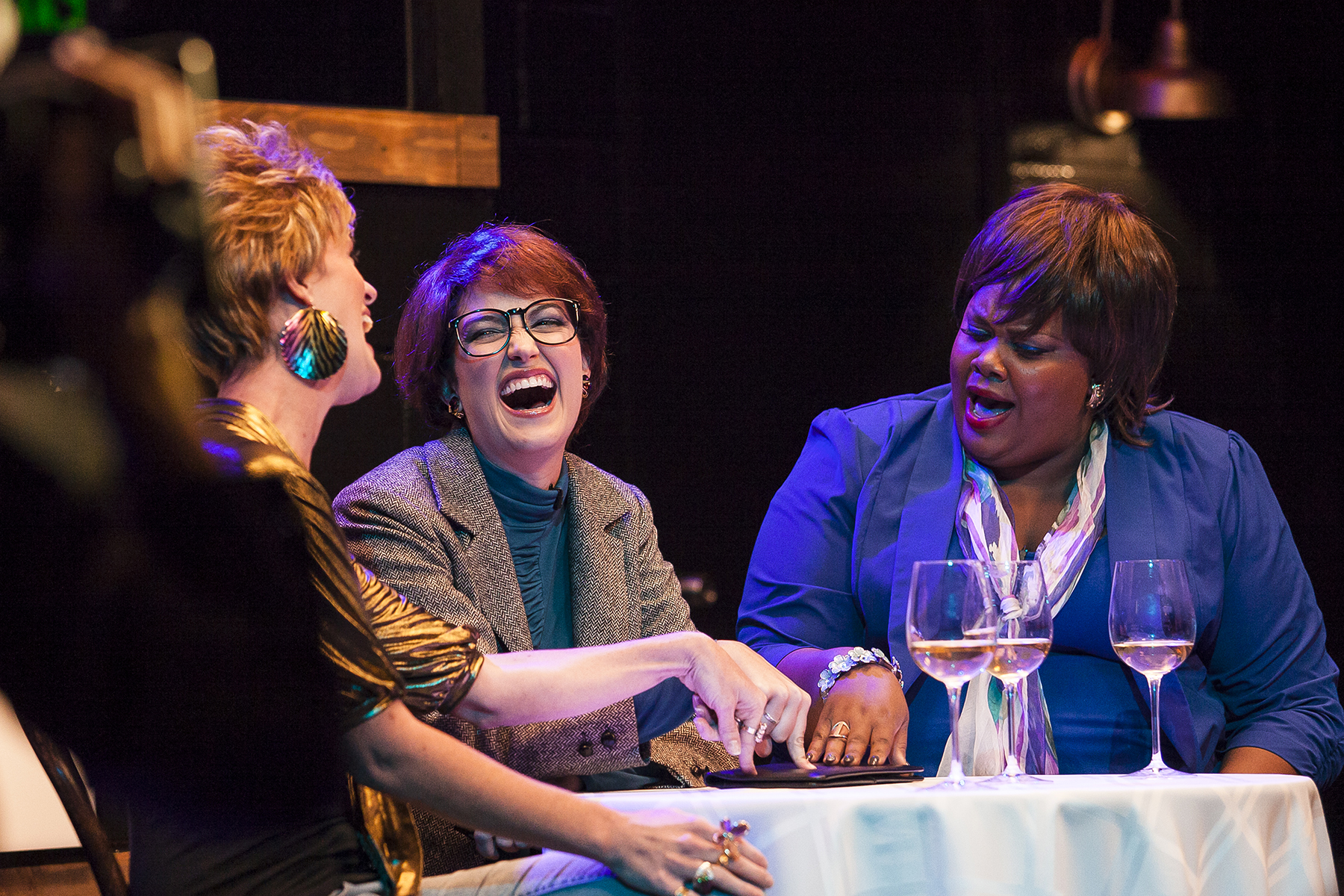 Middleditch & Schwartz has, apparently, broken through that barrier of reticence with the help of Netflix, but the replicability of the show’s format remains up for debate. It is a piece of content that seems to work perfectly within Netflix’s infrastructure. One of Netflix’s primary focuses is engagement—the company highlights the metric of “hours per subscriber per month” as a strong indicator of subscriber retention.[5] Their success, then, is dependent on having a large, diverse library of content, but this library must not necessarily consist of entirely “high quality” content. As Matthew Ball suggests, “Netflix’s scale and technology enables it to launch a mediocre show to a larger audience than most of its competitors can when they produce an outstanding one. That doesn’t mean the company doesn’t want great shows, but it does mean that the risk of producing a disappointing one is much lower.”[6] This is not to speak to the quality of Middleditch & Schwartz, but Ball’s point speaks to the freedom over qualitative risk that Netflix has over its competitors, meaning that Netflix can take a risk on a form largely untested in the visual media marketplace where other companies cannot.

While Middleditch & Schwartz has proven critically successful, Netflix is likely not the venue that is going to prove or enhance the mainstream viability of long-form improv. In an interview with Forbes, Middleditch and Schwartz admit to the increasing visibility yet still niche status of long-form improv. “Improv is a little bit more out there now,” Schwartz says. “The fact that we’re on TV makes it easier [to find an audience] … [b]ut at the beginning of every single show, we explain what [long-form] improv is because we assume the entire audience has not seen it.” To which Middleditch adds, “Only the ‘Yes and…’ nerds.”[8] This acknowledgment of the niche fanbase for long-form improv factors into Netflix’s algorithmic handling of its content. At the special’s launch, Middleditch & Schwartz may have received marquee status on Netflix’s user interface—at the very least, it is sure to have received high visibility on the user interface of users who, according to Netflix’s algorithms, enjoy this brand of irreverent comedy. Since then, as with all Netflix content, the show has disappeared under the weight of the revolving door that is new Netflix releases. Now, the show’s viewership is going to come predominantly from those users who seek it out (i.e. the “yes and… nerd” niche). This is to say that, while Netflix may be the company who took the big swing of financing long-form improv comedy on a large scale, it may also be the exact wrong location for such a project if that project’s goal is to broaden the viewership of improv comedy.