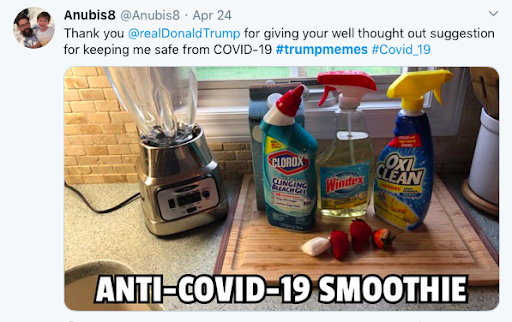 On April 24, 2020, social media responded to a comment made by US President Donald Trump during a press conference to address the COVID-19 pandemic. In that press conference, the president suggested that injecting disinfectants might be a potential cure for the illness. The White House issued transcript quotes the President as saying, “And then I see the disinfectant, where it knocks it out in a minute.  One minute.  And is there a way we can do something like that, by injection inside or almost a cleaning.”

News organizations spent significant time discussing Trump’s suggestion. So much so that the White House Coronavirus Task Force coordinator, Dr. Deborah Birx, said the media attention was “distracting” from the communication needed around COVID-19. Manufacturers of cleaning products and health care agencies were quick to denounce the president’s suggestion. However, news anchors, manufacturing leaders, and health care officials were not the only ones responding to Trump’s statement. Social media users quickly responded by lamenting the president’s intelligence and generating memes that questioned his credibility. 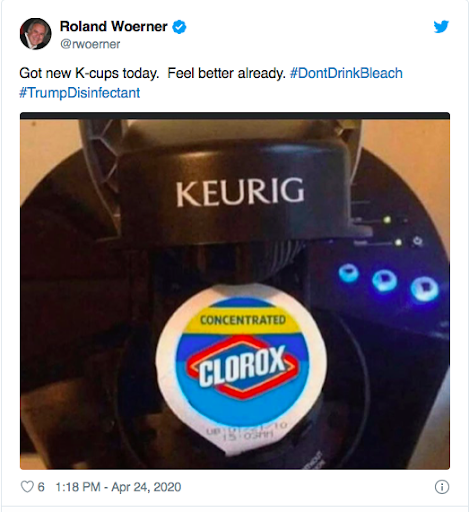 Memes are primarily meant to be funny and are often used as a way to publicly ridicule people or their behaviors. The hashtags #trumpmemes and #dontdrinkbleach were trending on Twitter after Trump’s press conference. Memes associated with these hashtags ranged from ridicule of the president to presenting new disinfectant products like Clorox Chewables and Lysol smoothies to political memes that depicted Democratic foes laughing over Trump’s statement or using it for political leverage in an election year.

But, why does this matter?

While President Trump is not a medical doctor, he is the primary speaker at the White House Coronavirus Task Force briefings. Trump often appears at these briefings with medical staff, including Dr. Birx and Dr. Anthony Fauci, who have long-standing credibility in the medical community. Dr. Fauci and Birx’s earned credibility may make Trump overconfident, and may cause the public to afford him credibility over a topic that he is not medically qualified to address. On the day Trump made this statement, he was joined by Dr. Birx, whose demeanor during Trump’s comments became a meme, with social media users suggesting she did not support his comments. 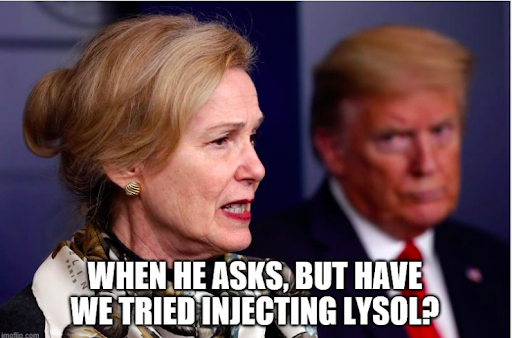 While a recent poll found that only 23% of Americans have a high level of trust in Trump’s public communication, there remain serious implications for Trump’s medical musings. After he touted the drugs chloroquine and hydroxycloroquine as potential treatments for COVID-19, Americans began hoarding and even consuming the medications, often causing more harm. Maryland Governor Larry Hogan reported that hundreds of people called an emergency health hotline with questions on whether they should drink disinfectants.

Credibility, whether low or high, deserved or not, is afforded to government officials. This comes with a special responsibility to the public to get the facts right. As current memes indicate, however, Trump’s credibility is in question. These memes may serve as more than an attempt at humor. They may save lives.

Image Credits:
tagged with COVID-19, Memes, politics, Trump
Flow is a critical forum on media and culture published by the Department of Radio-Television-Film at the University of Texas at Austin. Flow’s mission is to provide a space where scholars and the public can discuss media histories, media studies, and the changing landscape of contemporary media.