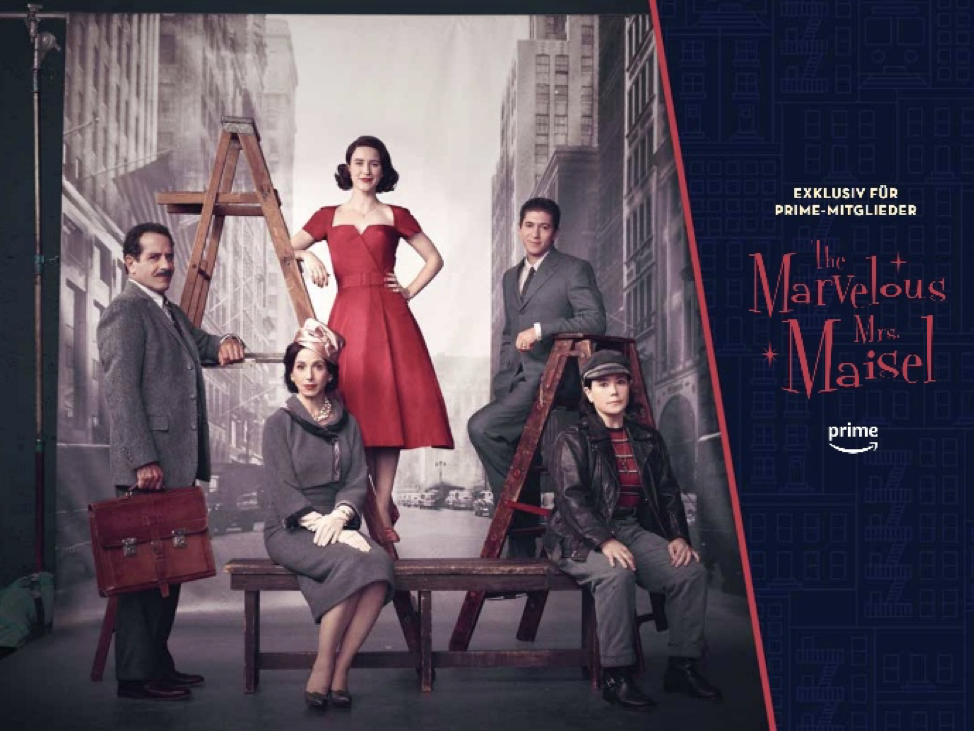 “It’s interesting. My father pointed out that my favorite part about a newspaper is the ads for shoes. And I felt bad about that, but now I think maybe they just put those ads in newspapers to distract us. Because if women don’t realize what’s going on in the world, they won’t step in and fix it. Because they will fix it- And accessorize it!” (Midge Maisel, Season 1, Episode 4, “The Disappointment of the Dionne Quintuplets”)

The Marvelous Mrs. Maisel (Amazon, 2017-present) is a dramedy set in late 1950s New York City about a Jewish housewife (Miriam (Midge) Maisel) from the Upper West Side who stumbles into a nascent career in stand-up comedy after her husband cheats on her with his secretary, and, subsequently, leaves her. In the series’ fourth episode, Midge accidentally ends up at a protest in Washington Square Park. As she strolls through the park with her son, someone is playing the piano as children, mothers, strollers, and passerby meander. Disrupting her reverie, she is bumped by another woman, who apologizes before running off, declaring, “I hope she hasn’t spoken yet!” We soon learn “she” is Jane Jacobs[1], the real-life activist who critiqued and fought 1950s urban renewal policy for its privileging of industry, cars, and capital over people, culture, and experience. Midge makes her way to the rally and finds it is a protest of Robert Moses’ plan to demolish the park to make way for the interstate highway.[2] Before she knows it, Midge is called to the microphone, much in the same coincidental manner she finds her way to the microphone at the Gaslight Café in the season’s pilot. Ever the performer, Midge works the crowd, declaring that now that she, and other women, are aware of the harms being done to their city, not only will they not stand for it, but they “will fix it, and accessorize it.” 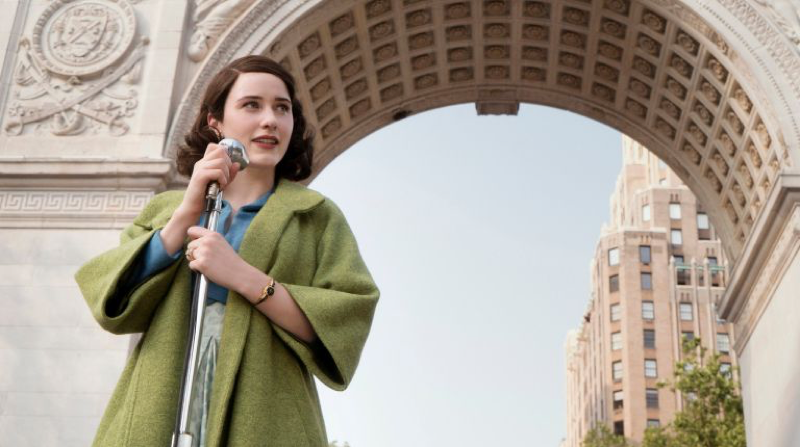 Miriam (Midge) Maisel (played by Rachel Brosnahan) speaking in Washington Square Park at a Jane Jacobs rally against Robert Moses’ plan to build a highway through the park. 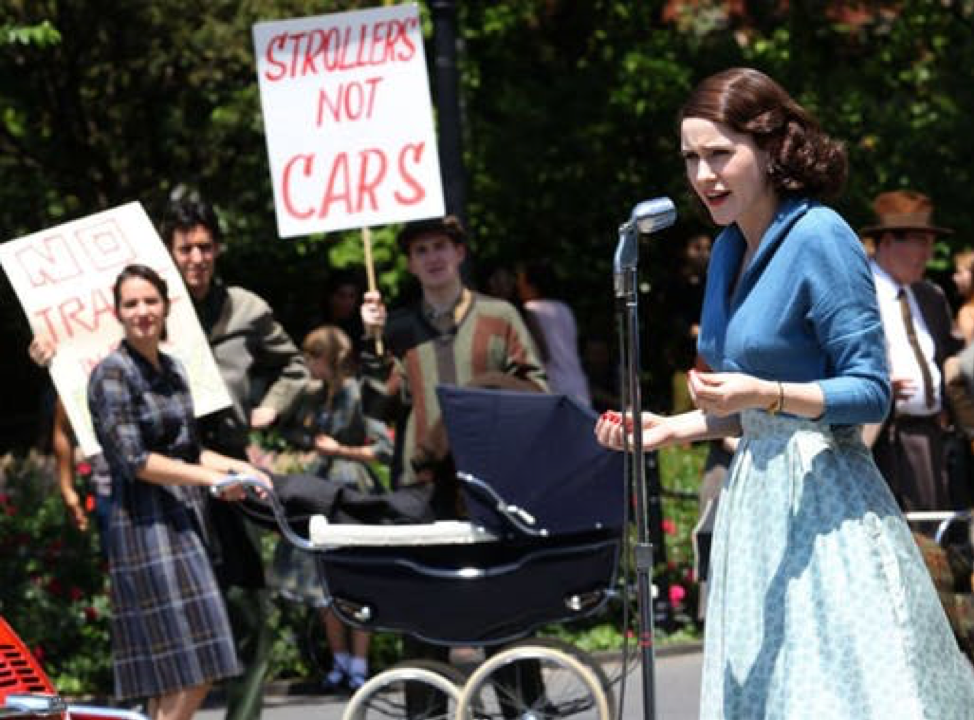 Midge speaking at Washington Square Park rally, surrounded by protestors holding signs declaring statements such as “Strollers not cars” demonstrate the gendered dimensions of Jacobs’ and other’s critique of Robert Moses’ urban renewal plan for New York and other cities, by arguing that cities needed to make space for mothers, children, and families.

The rally is so far Midge’s only entry into any kind of formal political activism. Instead, her comedy routine, largely pushing boundaries against 1950s gender norms, becomes the primary focus of her (coincidental) politics. Still, the rally is a notable scene for what it intimates about the show’s commentary on New York City, both then and now, and, perhaps especially, what women might do about it.

Much like the beleaguered New York of Jane Jacobs’ era, New York City has again become subject to a discourse of urban crisis—not because it is faltering, as in Jacobs’ day, but because it is prospering. As the city becomes an urban playground for the rich, and iconic neighborhood establishments close to make way for luxury condos no one will ever occupy, lamentations over a lost New York abound. Consider, Jeremiah Moss’ popular blog and book, Vanishing New York[3], dedicated to cataloging the disappearance of a New York both iconic and mundane. As a July 2007 post ominously notes, “Now I wait, hiding inside these bricks, blighted and condemned, for the wrecking ball to come for me as it will eventually come for you. In the end, we will all be lost in the pile of this vanishing city.”

Moss is neither the first nor last to decry that New York just isn’t what it used to be. In 1967, Joan Didion’s now famous essay, “Goodbye to All That,” kicked off a whole genre of writing about a New York loved and lost. Although Didion’s essay is more about a longing for a lost youth than for Moss’ vanishing New York, the current mode of “Goodbye New York” is much more along the lines of the latter, where everyone from celebrities to unknown struggling artists wonder if New York is really worth it anymore. For David Byrne, New York is becoming a city for the 1% that no longer makes things and is especially hostile to the social and economic conditions that foster art, creativity, and culture. For Ann Friedman, whose essay, “Why I’m Glad I Quit New York at Age 24,” went viral, New York is “that guy”—you know the one—“the prom king. He knows he’s great, and he’s gonna make it really, really hard on you if you decide you want to love him.” Friedman is just one of a number of women penning such essays, leading the feminist blog Jezebel to query, “Is Dumping New York City ‘A Girl Thing?’”

Amidst this longing for a lost New York, it is little wonder that some of the most popular recent television series set in the city are period pieces, including The Marvelous Mrs. Maisel.  In its fastidious set design, aimed to transform today’s city streets into the sites, scents, sounds, and experience of 1950s New York, the series produces affects of nostalgia. As production designer, Bill Groom noted, “It’s nice sometimes to capture a little bit of the New York that’s disappearing.” The series imagines a New York that was more gritty and “authentic” than the one of today, but also a past in which women were at the cusp of a movement and leading the charge to create a city that responded to their needs. Undoubtedly, this nostalgia is as much about the present and future as the past, responding to gendered discourses of urban crisis in present-day New York City while reminding us of a past in which New York women were poised to create change.[4]

What are we to make of this nostalgic longing, especially as it becomes pegged to Jane Jacobs and her influential work on gender and the city? As Jacobs makes her way into contemporary popular culture, her theories of women’s importance in creating vital and vibrant cities is also seeing a revival in urban planning and renewal strategies. Marguerite Van Den Berg suggests Jacobs’ appeal is precisely because of her emphasis on gender—“femininity is here associated with the imagined future city: a city of creativity and spontaneity…Jacobs is mobilized because she symbolizes this non-modern spontaneity, but also because she is a woman.”[5] Yet, unlike Midge, the women of today’s New York, especially women of color and working class women, are not only fighting new Robert Moses figures—real estate developers and tycoons who want to clear the city to make way for new high rises and highways. They are also, in a sense, fighting today’s Jane Jacobs, whose ideals have been adapted by real estate developers and bureaucrats alike to preserve and reinvent the city’s “authenticity,” driving up rents and displacing the poor as much as those strategies more Moses-like.[6] While Midge joins arms with other women calling for the preservation of Washington Square Park, if she were transported to today, would she be protesting yet another coffee chop, Edison lightbulb decorated craft beer pub, cat café, or axe-throwing range?

One can only wonder.

Nostalgia is a powerful affect. It remains to be seen how Mrs. Maisel exactly imagines Midge and other women will ultimately “fix” and “accessorize” the city. I guess we will just have to keep watching.