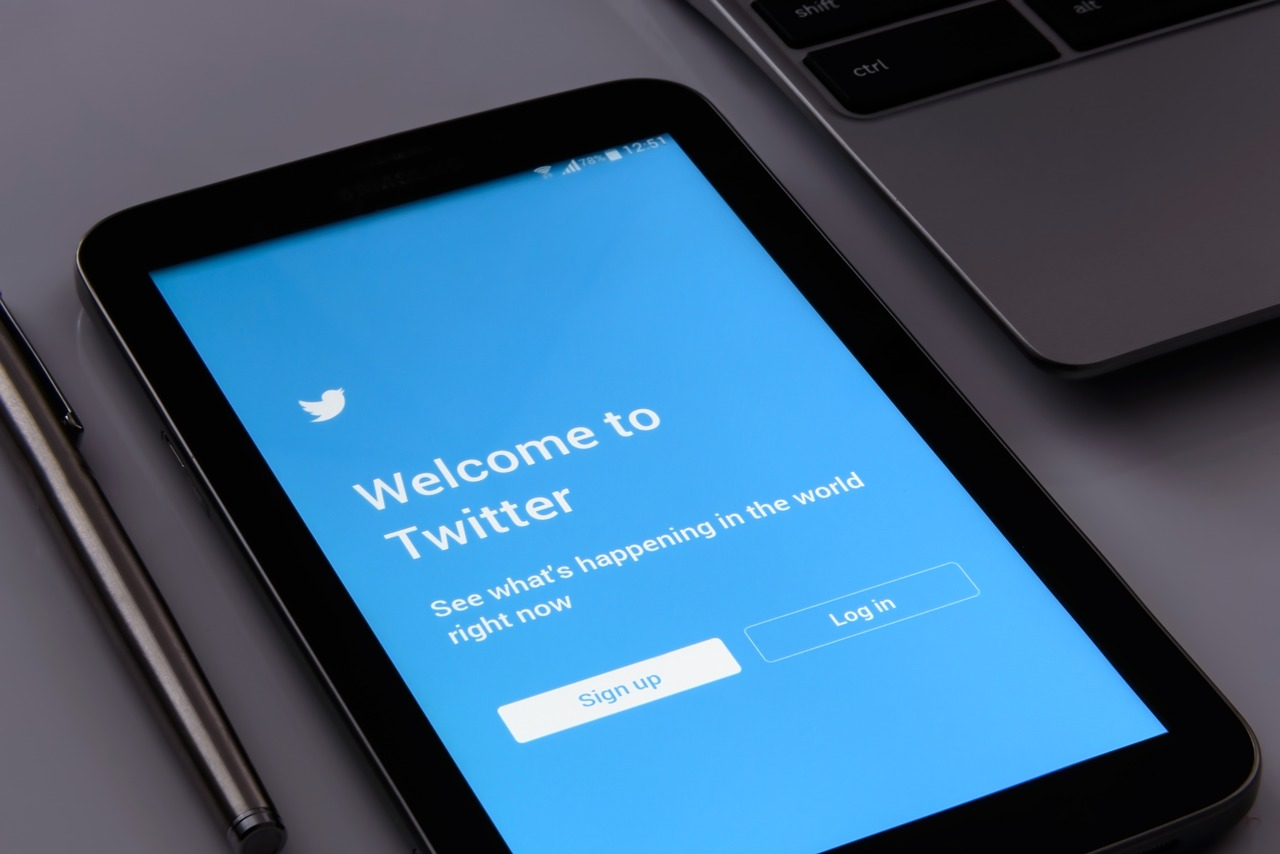 Researchers have increasingly turned to Twitter for social media analysis.

In recent years, as more scholars have begun turning their attention to social media, quoting and citing material from social media sites, particularly Twitter, has become a source of great controversy. Traditionally academics have considered anything publicly available online as “published.” Therefore, no permissions are required to cite this material with proper attribution. While this is an established standard among researchers, it is not universally agreed upon by social media users, many of whom feel citing their tweets is equivalent to eavesdropping on a personal conversation or even intellectual property theft. This has emerged as an ongoing debate with little consensus.

Because social media blurs the lines between public and private, producer and audience, and mass and interpersonal communication, users have complicated and often contradictory beliefs about how their social media timelines should be viewed and potentially used by researchers.[1] Twitter is a particular challenge because it so commonly functions as both mass media, a one-to-many style of communication, and interpersonal comunication. Politicians and celebrities rarely hold official press conferences anymore. They instead make statements via Twitter and other social media. Many Twitter users see their tweets as contributions to a larger public discourse and will often describe them in terms of intellectual labor and/or property. At the same time, Twitter is social media and retains some of the expectations of social interaction. Users have conversations and interactions that they see as sociality, not mass communication, and consequently, quoting or referencing these tweets is viewed as similar to quoting a conversation that was overheard. Users in the same networks, sometimes even the exact same users, interpret Twitter in both of these contradictory ways. 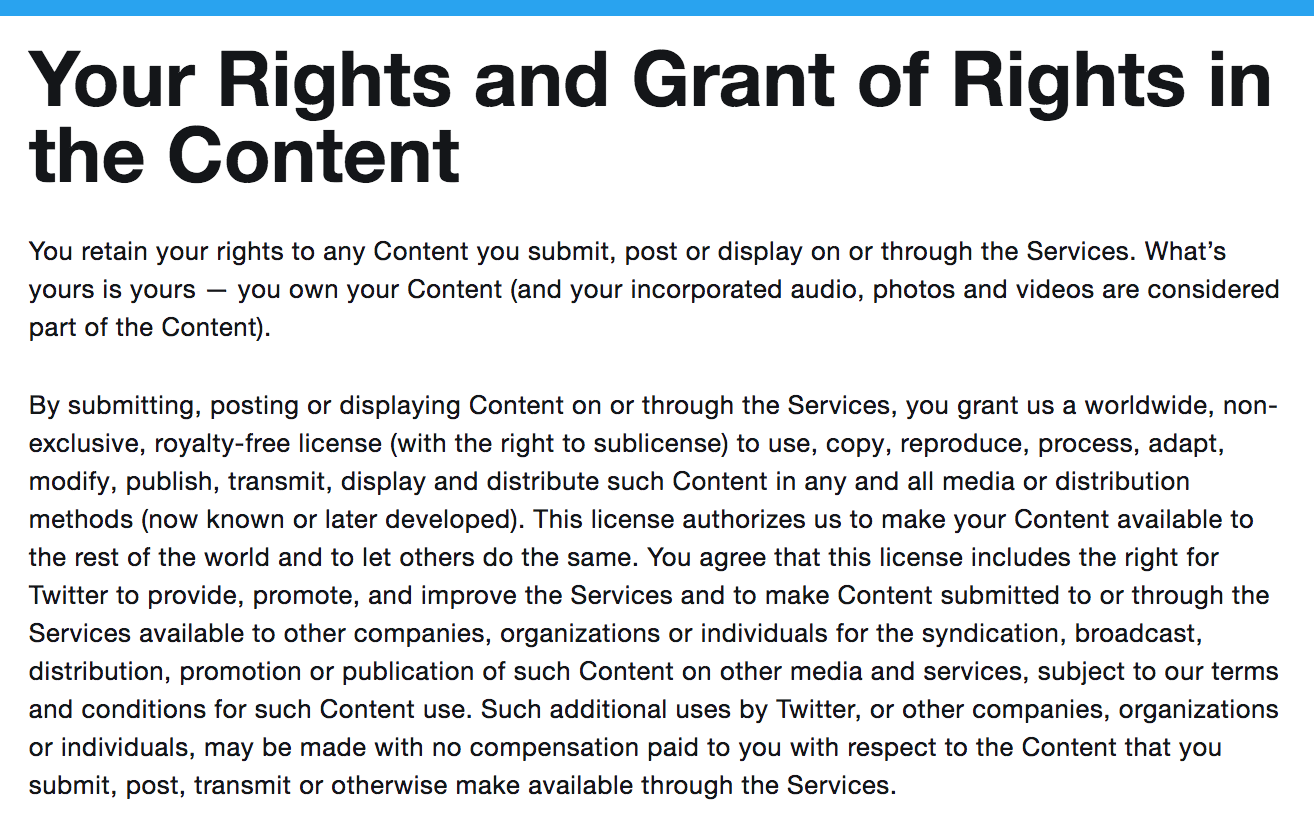 Unlike many social media platforms, Twitter’s Terms of Service does not grant the platform copyright of users’ content. According to Twitter, “You retain your rights to any Content you submit, post or display on or through the Services. What’s yours is yours…”[2] The the rights and regulations of intellectual property have been governed by a set of federal laws that outline who can use ideas, how, and under what circumstances. Section 107 of the Copyright Act allows for unlicensed use of copyrighted material for commentary and criticism, parody, news and reporting, teaching, scholarship, and research.[3] Academics are covered under several of these categories, making direct citation permissible with proper attribution.

However, though that is the legal standard, in the age of massive media conglomerates the de facto standard for Fair Use has been based on which entities have the resources for legal action. For example, academics are routinely forced to pay licensing fees to cite song lyrics in their work. Under fair use, quotation of song lyrics should be permissible as commentary, criticism, or scholarship. However, after the music industry began aggressively pursuing peer-to-peer file sharing and other intellectual property issues in the early 2000s, fair use seems null and void when it comes to materials owned by this industry. Publishers of academic books and journals simply can’t afford to be embroiled in a legal conflict with large media corporations and will instead require authors get permission for quotes. Obtaining this permission generally involves the author paying a licensing fee that can be several hundred dollars per line of lyrics. This phenomenon is not confined to academia. Stephen Colbert did several segments on The Colbert Report where he joked about his inability to use footage of NFL games or even use the trademarked phrase “Super Bowl” because Comedy Central’s parent company Viacom was unwilling to take the legal risk. Thus, while there are legal standards, ultimately copyright and usage is a matter of power, not legality.

Some Twitter users express attitudes about intellectual property and quotation that are in line with fair use, merely wanting their ideas attributed to them. However, some users express a belief that on the surface is more in line with the licensing model embraced by the music industry or NFL, that they should be compensated when their words are used regardless of the context. In part this is grounded in the ways that marginalized people, particularly Black women, are systematically denied the opportunity to benefit from their intellectual contributions. Outlets often seem eager to quote marginalized people’s ideas while rarely giving them opportunities to write professionally. This licensing-style approach to quotation seems to grow out of this inequality. These users are often chided for claiming intellectual property rights that far exceed those granted by law or norm. But, given that the enforcement of intellectual property rights have largely become about power, rather than legal standing, demanding compensation for quotation can be understood not only as an attempt to rectify an economic imbalance, but as an attempt to reclaim power. Users from marginalized groups have long had little say in how they were written about and how their ideas were used. Demands for remuneration when they are quoted are both an amelioration of inequitable material circumstances and an assertion of agency.

These power dynamics require researchers to be particularly attentive to the ethics of their citational practices. The days of codified, agreed-upon field-wide practices are gone. To be ethical in our research, scholars must be attentive to the complex, nuanced, and fluctuating contours of power in Twitter networks. Our approaches to citation of social media sources must be contextual, adaptable, grounded in cultural competencies, and created in conversation with those we cite.

Image Credits:
1. Researchers Have Increasingly Turned to Twitter for Social Media Analysis
2. Screengrab of Twitter’s Terms of Service Page
3. No consensus among Twitter users about fair use and copyright.