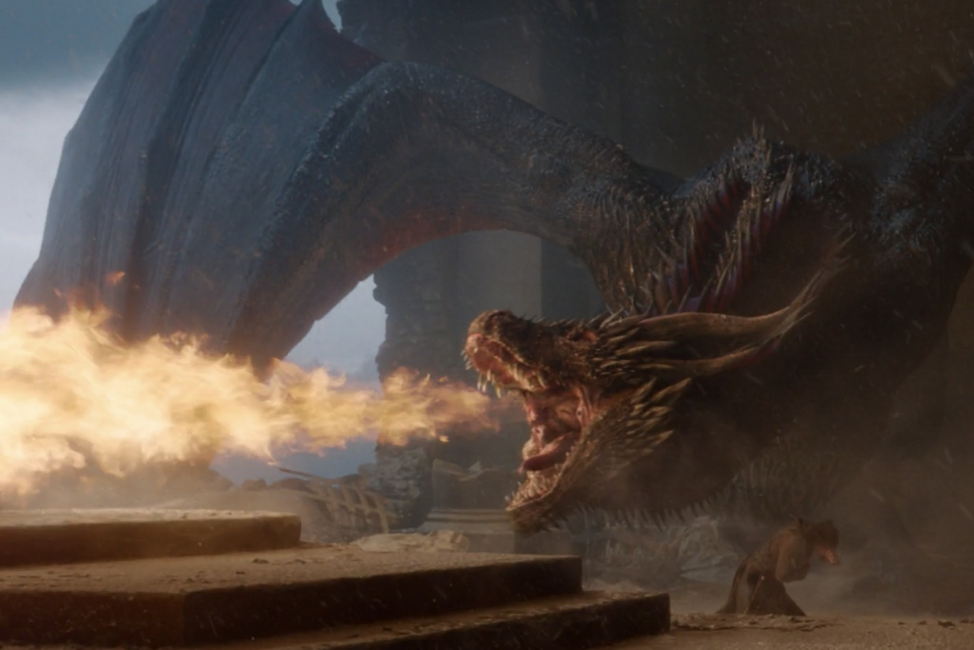 A lot of folks are upset with the final season, and the final episode, of Game of Thrones. I don’t blame them. Characters’ essences seemed to veer at right angles, a lot of loose threads weren’t tied up, and Arya is all set to be Westeros’s very own Christopher Columbus.

However, some of the online vitriol has made me wonder if we have been watching the same show. As Kristen Warner points out, thinking through gendered modes of reception is vital to unpacking this show and its fandom. Here, I offer a take: the show (and its source text, but more on that later), has always been fundamentally queer. And the finale was oddly, queerly, satisfying.

From day one in Game of Thrones, anyone who tried to assert power in the traditional masculinist patriarchal manner—war, birthright, honor, chivalry, overpowering your enemy by force—simply died, was a shit ruler, clueless to soft power, or all of the above. Because patriarchy is a violent, closed system and heteronormativity specializes in its reproduction, from day one it was always the queers/disabled/kids/social outcasts (read: those who can’t rely on the system to ratify their genital agency) in Westeros who have known what’s up. They have rarely if ever been invited to the table, they have to move in the wings in order to get what they need, and as such they have a clearer sense of power and injustice, unclouded by masculine ego and dickly posturing (Varys, anyone?). They’re better at the game precisely because they have never known the dull safety of state-sponsored patriarchy. This is a powerful social critique that is embedded in George R.R. Martin’s text. It resonates with the late media scholar Alexander Doty’s famous argument in his book, Making Things Perfectly Queer: it is not enough to “read” some media “queerly”; in fact, shows such as Designing Women or Laverne & Shirley are literally queer, in their politics of relation, their eschewing of norms, their baked-in values.

What viewers may have missed in their rightful rage against this season’s clumsy plotting and its especially poor exposition of Dany’s sudden, so-called “descent” was the subtext hidden in the ostensible way forward in Westeros—specifically, the makeup of those who wind up on Bran’s Small Council as the series ends. If Dany wanted to “break the wheel,” she did so inadvertently, and via her death, for she would never have picked this strange assortment herself. But their specific selection is anything but random. The Small Council is really where ruling power resides in Westeros, though this may be emphasized in the novels more than the show, and thus easier to miss. This is the sly redemption built in to the finale, and begins to make sense if we consider the figures specifically: 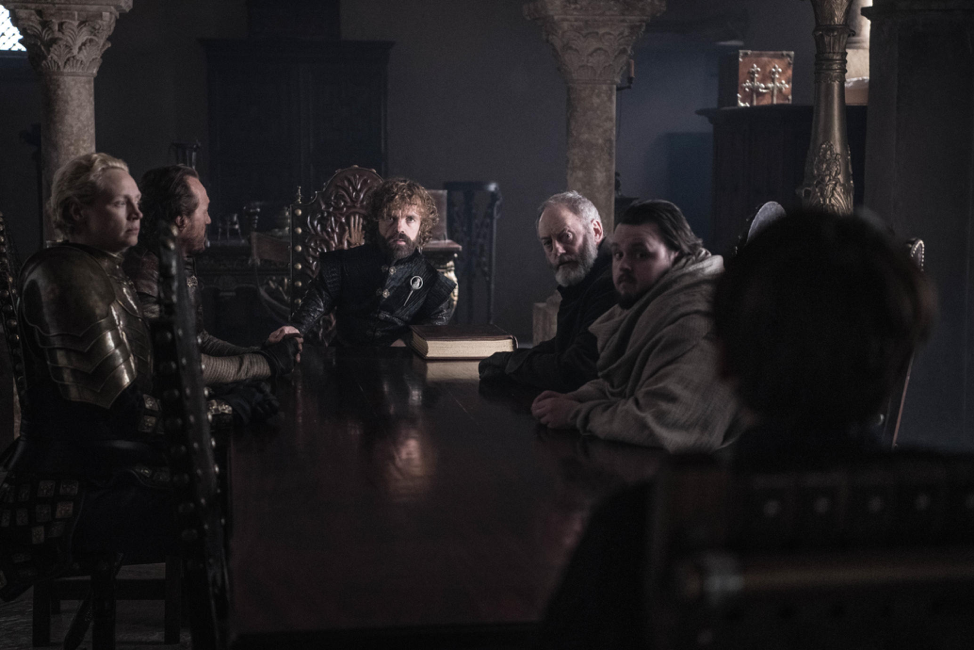 All of these folks would have been laughed out of the room (and most were) because they didn’t “belong” there, or ever fit the mold of who could be in charge—think the Lannister council or even Ned’s. And now they’re the ones repairing Westeros. The show has offered us a vision of queer coalition politics that we are too busy raging about Dany to see.

So where does this leave our heroine? Unfortunately, by series’ end (but really all the way throughout) Dany falls into the former category, of slash and burn, of womb and birthright—whenever she’s in a pinch, she torches everyone in sight. As one friend of mine said, incredulous at the Daenerys fan outpour: she basically turned out to be a fascist. If this thesis holds, are we really that surprised with what happened to her? You can’t dismantle the master’s house with his tools; the show may be reminding us, as decades of queer and feminist scholars such as Lorde have, that even heroic (white) women can be agents of patriarchy. Instead, by series end, we have the disabled, the disowned, genderqueer, working class, the “criminals,” and the geeks running the (six) kingdoms. To boot, we have a wise and practical Sansa, wanting nothing to do with the cursed chair, hardened by her own experiences with patriarchal trauma, ruling her own independent nation (historically the bro-iest of them all) without killing scores of her own people, OK, thank you. 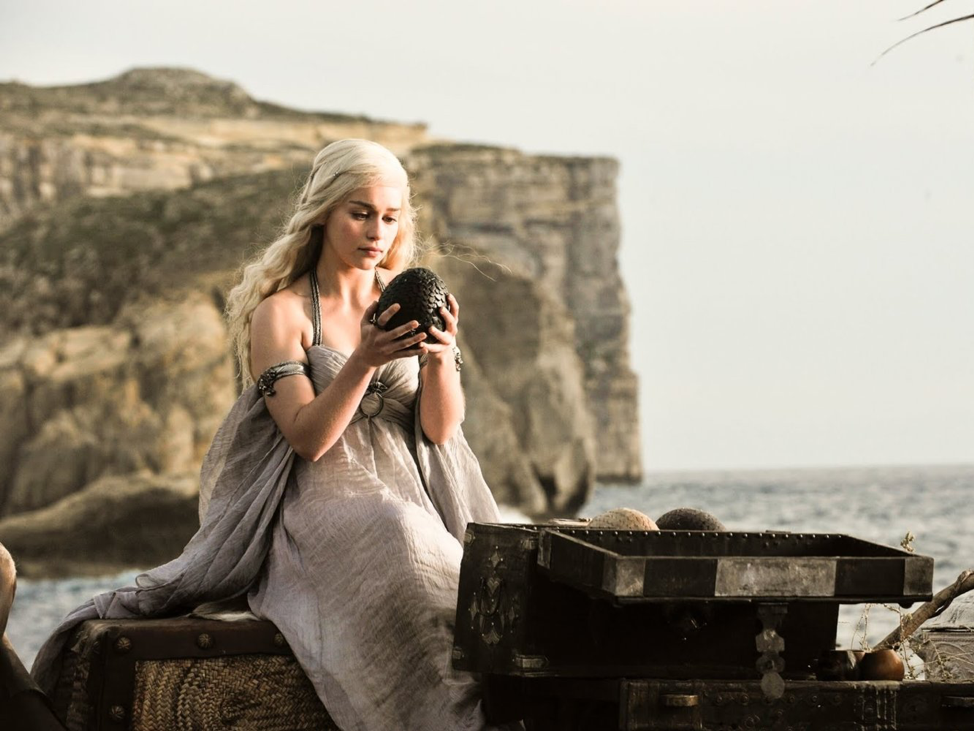 Even the notion of the “wheel” that needs to be broken has a famous antecedent in queer theory. The queer and feminist scholar Gayle Rubin’s concept of the “charmed circle” resonates here: the idea that a certain, narrow constellation of gendered sexual practices lines up nicely inside what any given social moment deems acceptable, while those outside it—non-reproductive sex, swapped sexual power roles, sex with unsanctioned organs and orifices—are anathema to our social order. Could this be the true subtext of the broken wheel?

On the subject of organs, what seemed like a Sansa non sequitur about Bran’s kingly impotence during the final episode’s makeshift continental referendum is actually crucially important to this narrative: he’ll never be able to dick his way into prolonging his power through the tried, true, and horrible mechanisms of patriarchal dynastic tyranny via favored progeny. “Lannister, Targaryen, Baratheon, Stark, Tyrell—they’re all just spokes on a wheel. This one’s on top, then that one’s on top, and on and on it spins,” as Dany laments early on, can be read in this way at show’s end—not simply as an eye-roll at the same old rotating cast of characters, but also as an indictment of something so taken-for-granted as the assumptive security-via-futurity of reproduction and lineage, in an echo of Lee Edelman’s provocative thesis. In a way, this is also what Cersei wrestled with throughout her arc, painfully straining against the system to recraft her womb as phallus over and over again in search of agency, ultimately leaving herself bereft, glum, and childless.

All along, there has been a problem of race in Game of Thrones, and admittedly, the final Small Council’s composition doesn’t address this foundational aspect of intersectional coalition head-on, in favor of other axes. But they didn’t have much to work with on this front, and that is one of the show’s (and novels’) persistent failings. Dorne, in the novels, is the only racially diverse part of Westeros, with its own problematic colorist hierarchy, but that barely registered on the show, to the disappointment of many. (In fact, Dorne is given several significant storylines in the novels that have been condensed or completely erased in the show.) Though it is a fantasy, and on another planet, Martin’s world-building has always mapped uncomfortably onto Euro-medieval conceptions of “race” and geography: most of Westeros is England/Scotland, complete with “first men” and ensuing Roman and Norman conquests; swarthy Dorne could be Spain; fallen Valyria is a call-out to ancient Rome. And then there’s the land of “Yi Ti” to the East, across the “Jade Sea” with its inhabitants who sport rat-tail hair queues, and the jet-black skin of the people of the “Summer Isles,” to the tropical South. In light of all this, who can blame Grey Worm and the Unsullied for wanting to get the eff out of Dodge at the end?

But what I find more interesting is the possibility that Martin, knowing how it would turn out, may have been clucking to himself while we all uncomfortably cringed during Season 3’s “Mhysa,” with its incredibly bad optics of throngs of enslaved people of color holding up an alabaster foreigner as their savior, which we went along with anyway because we wanted to. D’oh! Maybe Martin tricked us into this misplacement—pinning our hopes on one woman is never the answer, and the mere fact that we thought a “hero” who needed to win a “throne” to right wrongs would even be one person at all reveals our deep-set conditioning to gaze in the patriarchal mode, especially if that patriarchal hero is platinum blonde, gorgeous, and female. Maybe heroically violent white women conquerors are simply a prettier iteration of racialized patriarchy.

Unfortunately, Dany, by series end, fails to realize to herself that she is the last spoke holding the wheel together. The throne room scene is telling (not because Drogon apparently understands symbolism), but because a delusional Dany tries to clutch at the cogs of the machine she had wanted to destroy, lusting at the possibility of security in the progression of almighty family alongside Jon in a new (old) dynasty for a new (old) era. The actress Emilia Clarke purposely played it this way. In regards to her final scene, she told the New Yorker, “I wanted to play a game with what the scene was about. It’s not that I wanted to show her as ‘mad,’ because I really don’t like that word. I don’t enjoy fans calling me ‘the Mad Queen.’ But she is so far gone in grief, in trauma, and in pain. And yet our brains are fascinating in the way that they find a fast route to feel O.K., whether you’re relying on a substance or you’re mildly deluded.” For a blip, we kind of wanted it too; that’s the way these stories are supposed to go.

There is a radical point gurgling under the surface here, for those interested in the potential of progressive, intersectional politics: it turns out that a power-hungry entitled woman may not be our feminist savior after all, and in fact may end up reproducing the very politics she wanted to dismantle. Maybe truly breaking the wheel—and an exercise in intersectional queer world-building—looks more like a motley bunch of social outcasts, gender misfits, and former “criminals” at the council table doing the boring but important work of rethinking old-boy givens (State-funded brothels? Haha, no. Feeding the poor? Yes) instead of flying in on dragons or slaying kings.