#Save: NBC’s The Voice and Live Social Television
Maggie Steinhauer / University of Texas at Austin

July 30, 2018 Maggie Steinhauer / University of Texas at Austin One comment

In recent years, Twitter has noticeably intertwined itself with live television as an interactive tool through its clever integrated hashtags and corresponding custom emojis. Live performance-based reality competition shows such as America’s Got Talent (NBC), The Voice (NBC), American Idol (ABC, and the former FOX series), and So You Think You Can Dance (FOX) all utilize some form of Twitter voting, either as an alternative to calling in your vote or through a #Save promotion. Social media integration is typically hailed as an exciting, interactive feature for audiences, yet the real beneficiaries of these Twitter tactics, from an industry studies perspective, are the producers and networks. Twitter integration, in that respect, is a producer-fueled trend to encourage live viewing and boost advertising revenue by incorporating viewer and fan labor into the process of production. The ways that these features are marketed to audiences and the implications of their standardization warrant further academic attention, and The Voice ‘s success with social media integration makes it a prime example.

Time-shifted television and online streaming can spell disaster for live reality programs like The Voice, as both viewing methods allow for commercial skipping. Event television, which Idol ‘s original run used to qualify as, can be a deterrent against non-linear viewing as it creates an impetus to watch live. But as the dominant scheduling conventions of these kinds of reality programs become ingrained for viewers, the necessity to even turn on the television before the final moments’ reveal begin to fade. For example, the fixed format of FOX’s Idol eventually became unnecessary and amid falling ratings, it eliminated the results-only episode in 2014. With popularity waning all around, there was less impulse to watch live rather than catch up on DVR. Or better yet, just browse headlines on social media without ever watching.

In 2013, The Voice (and Twitter) introduced their “Instant Save,” or #VoiceSave, during season five and ushered in a new live interactive component to the genre, reminiscent of the QUBE TV in the late 70s, as discussed by Amanda Lotz. [1] Previous iterations of Twitter voting on reality competition shows were surely entertaining, but they failed to achieve interactivity in the same manner as The Voice ’s #VoiceSave. With the #Save feature, viewers were “in control” for a small portion of the episode, and as a key component, they had to follow along with the live broadcast in order to participate and likely stay tuned through those commercial breaks. 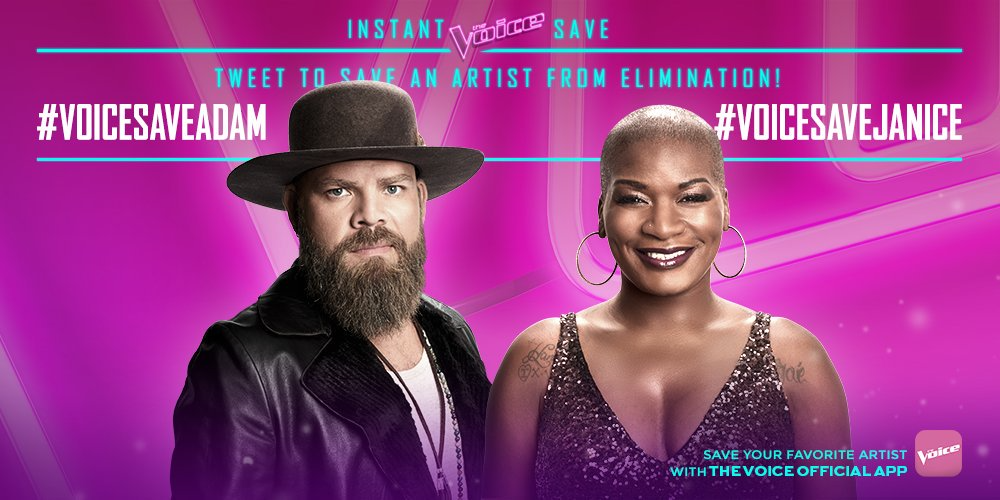 Graphic from @NBCTheVoice during the #VoiceSave window on the November 28, 2017 episode

Two years prior to The Voice ‘s version, Simon Cowell’s cancelled X-Factor became “the first-ever TV series to allow voting by Twitter,” but instead of using hashtags as the other current programs do, X-Factor asked viewers to vote by private Direct Messages to the show’s official Twitter account. [2] And although not performance-based, it is noteworthy that Big Brother on CBS also experimented with Twitter as early as 2012. AGT may not have been the first reality competition program to use Twitter voting, but they were the first in this wave of Twitter-integrated programs that allowed audiences to vote by hashtag in order to save a contestant. Essentially, this method was the next logical step in television voting’s evolution, from calling in, to texting, to web votes, and then to Twitter, but without the live component. The following year after The Voice began using the #VoiceSave, Idol (on FOX) and SYTYCD instituted similar measures.

With the addition of the #VoiceSave, The Voice ‘s results segments now invite the audience to determine which contestants will be eliminated in real time. During the last minutes of the live broadcast, host Carson Daly bring ups the bottom two or three contestants previously determined by conventional overnight voting methods. He proclaims the #VoiceSave open for five minutes only and cuts to commercial. The power, supposedly, rests solely in the hands of live viewers and they are only able to take part in the decision-making on Twitter. In The Voice ‘s recent seasons, the #VoiceSave has become more streamlined through their official Twitter account, @NBCTheVoice. Daly still reminds the viewing audience about the #VoiceSave throughout the broadcast, but the instructions are relayed through Twitter simultaneously to the point where Twitter users (and non-east coast viewers) can follow the live broadcast without actually tuning in. I’ve compiled several screenshots of and links to the @NBCTheVoice account from the November 28, 2017 episode (all on EST) to illustrate how the #VoiceSave functions. Around the halfway point of the episode, before the bottom two contestants are announced, @NBCTheVoice tweets:

8:29 PM Screenshot of @NBCTheVoice’s tweet during the live broadcast on November 28, 2017

Ten minutes later, @NBCTheVoice announces the bottom two contestants. In this episode, contestants Janice Freeman and Adam Cunningham are up for elimination and will give final performances before the live Twitter vote. After the first performance, a second reminder goes out:

8:45 PM Screenshot of @NBCTheVoice’s tweet during the live broadcast on November 28, 2017

At 8:50 P.M., twenty-one minutes after the process was initiated online, the five-minute voting window is officially opened via Twitter. @NBCTheVoice tweets out identical messages using the hashtags #VoiceSaveAdam and #VoiceSaveJanice that quickly begin to rack up retweets which Twitter adds up live. By 8:55 P.M., @NBCTheVoice tweets “The #VoiceSave window is now CLOSED!” and at 8:58 P.M., it announces, “YOUR TWEETS just sent @adam_cunningham to the #VoiceTop10.”

Compared to previous voting methods, The Voice ‘s iteration was a shift because it capitalized on the second screen experience and in doing so found a means to motivate viewers to watch live TV. Where the other programs had developed a “feature,” The Voice had gone interactive, in a move noted by Variety editor-in-chief Andrew Wallenstein as the “gamification” of reality TV. [3] Wallenstein posits that such practices directly involve audiences in the action of the live programming, essentially turning segments of the program into a game for audiences, and that process may be the key to “revive” reality TV. The term is also associated with video game design researcher and scholar Sebastian Deterding. As part of a conference presentation in 2011, Deterding, et al. defined the concept as “the use of game design elements in non-game contexts.” [4] In the case of #VoiceSave and other #Save’s, the closer these processes are to games through their structure, rules, and real-time effects, the more they represent an interactivity as opposed to participation enabled by convergence culture. 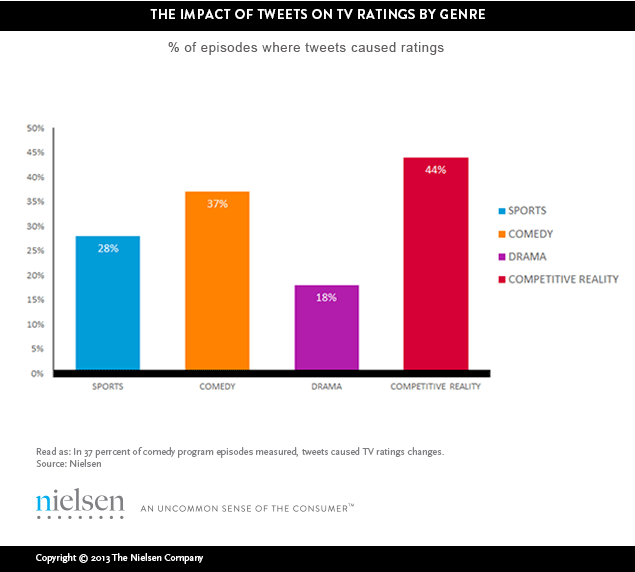 2013 Graphic from Nielsen on the connection between ratings and Twitter

There is still debate as to the effectiveness of social TV, as Todd Spangler writes. Although, Spangler does offer that the Nielsen’s social television ratings are “designed to show the total Twitter activity relating to specific shows, to help networks and advertisers figure out how to better use the social service to drive awareness and tune-in,” not necessarily to increase ratings. [5] Yet, Twitter and Nielsen released various reports detailing increased ratings, higher audience engagement, and better brand retention. For example, the first night AGT enabled Twitter voting in 2013, the show witnessed an “8x increase in overall tweets” during that episode compared to the previous week, with a total of 117,000 tweets. [6] And approximately a year after The Voice instituted their #Save, it aired the “most-tweeted about TV series episode since Nielsen Social began measuring Twitter TV conversation in 2011” with 1.92 million tweets reported during the May 13, 2014 episode. [7] And Nielsen Social data shows that in 29% of programs, a spike in tweets influenced changes in ratings, and the effect rose to a 44% increase in ratings for competitive reality programs, specifically. [8]

Whether viewed as the last-ditch strategic maneuver of a fading industry or rather as a shrewd reflexive adaptation to existing user behaviors, interactive Twitter voting in live performance based reality competitions is becoming a norm for the genre. It opens up worthy discussions of the rise of TV’s gameificiation, interactivity, fan labor, and the connection between social TV and liveness. The specific use of Twitter for live voting in its various iterations has ushered in noticeable format changes in primetime reality tv. All this increases the stickiness of results-only episodes, and remodels the audience’s viewing labor. To these mass ephemeral programs dependent on high viewership and advertising, their ability to promote liveness and engagement remains paramount, but is continually challenged by the current post-network era. In this post-network moment, a portion of programming power shifts toward audiences as part of a larger initiative to combat a less engaged mass audience. The central question for contemporary broadcasters, especially for their prime-time reality tentpoles, is how to continue providing their product, that highly engaged mass audience, to their advertisers.