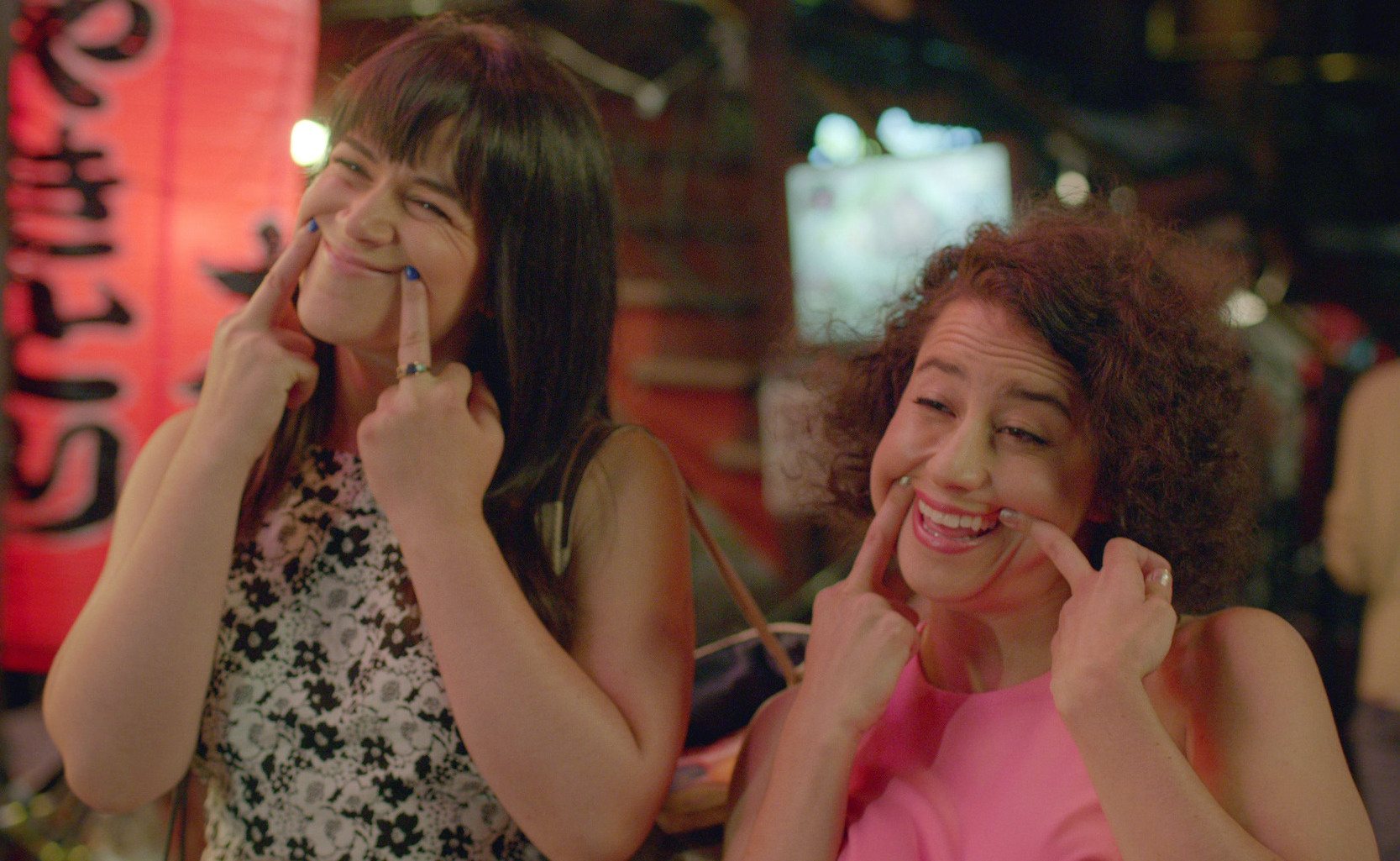 In our last column, we introduced our concept of Horrible White People shows: bleak comedies or satires that feature middle-class, self-professed liberal white people, most often women. These characters’ self-obsession, we argue, contributes to a cultural milieu that re-emphasizes the complicity of white liberal cultural products in supporting and maintaining white supremacy. That column addressed mental illness as one representational trend in this cycle. Using Broad City as a case study, this column illustrates how the close, supportive, sometimes even joyful female friendships and self-aware humor in Horrible White People shows are an expression of emerging feminism, but also let white women off the hook for participating in and benefitting from white supremacy.

Broad City (2014- ) – the Comedy Central sitcom produced by Amy Poehler and written by stars Abbi Jacobson and Ilana Glazer – has become one of contemporary television’s new feminist critical darlings. The show has been praised for its casting diversity, where Abbi and Ilana’s circle of friends and hookups include people of color and various sexual identities; and in the writer’s room, where six out of its nine writers are women, two of them women of color. Like many shows in this cycle, Broad City wears its liberal politics on its sleeve, featuring episodes where Abbi and Ilana volunteer for Hilary Clinton’s campaign, advocate for Planned Parenthood, and frequently articulate progressive political discourse about economic inequality, immigration, and gun control. The whole fourth season features explicit anger at the election of Donald Trump, including an episode where Ilana discovers she can no longer orgasm because of her anxiety over Trump’s political policies, and the season-long joke of bleeping out Trump’s name like a profanity.

Abbi and Ilana’s open, unconditionally supportive friendship is also central to both the pleasurable appeal and liberal feminist politics of the show as the girls [1] see each other through job losses and transitions, medical emergencies, sexual firsts and a slew of other life events. Through all of these crises or adventures, the show centralizes and celebrates platonic female relationships, thus bucking the representational norms of the female-centered sitcom’s traditional focus on heterosexual coupling and romance. One exemplary opening sequence, depicted in a split-screen with Abbi’s bathroom on the left and Ilana’s on the right, reveals the intimacy of their friendship as they share the often-hidden bodily truths of women’s lives and experiences with each other on the phone and through the shots’ parallel compositions. 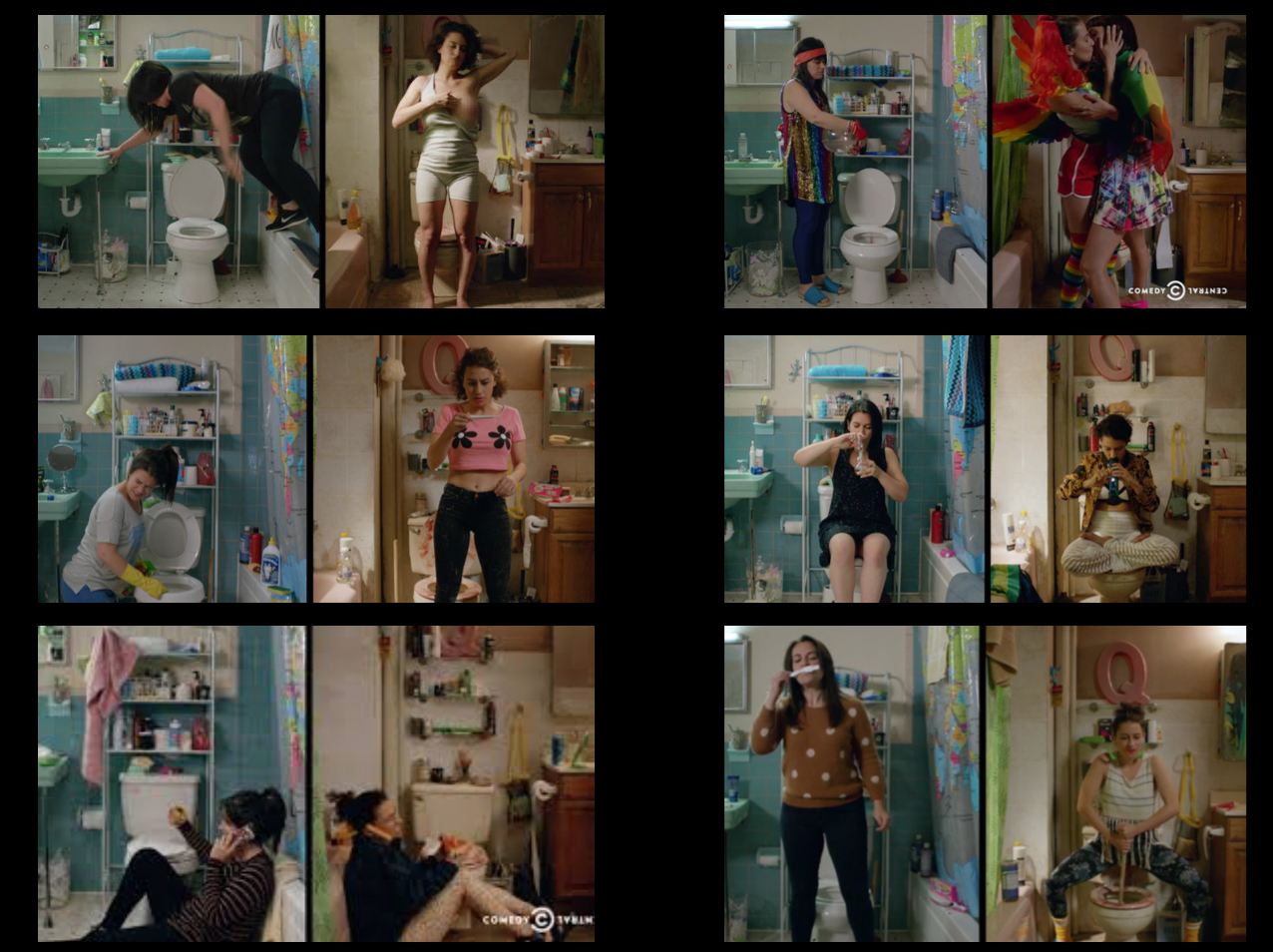 Throughout the sequence, each in their own bathroom (although they appear together in each other’s most intimate domestic space occasionally too), the girls repeat similar actions like reading Hilary Clinton’s book and taking a pregnancy test. They enact a variety of sexualities across the spectrum and talk on the phone in various emotional states. They expose the rituals of feminine upkeep and performance (hair waxing and plucking) and desexualize the female body and its maintenance (defecating and performing breast self-examinations). The scene’s montage of often-hidden feminine intimacies answers Adrienne Rich’s call for an amplification of women’s affections for each other that acknowledge women’s experiences on the lesbian continuum, foretell a more woman-centered life for women, and lay the foundations for a collective feminist movement. [2]

Broad City, like several other shows in this cycle, thus highlights how building close connections with fellow women is a powerful feminist act: together Abbi and Ilana have the support they need to visually and vocally critique societal expectations of women, and the comfort to cope with those expectations until they change. Yet however progressive and refreshing their relationship seems, the girls’ friendship, like many of those in this cycle (Gretchen and Lindsay on You’re the Worst; Rebecca and Paula on Crazy Ex-Girlfriend; and the women of Girlfriends’ Guide to Divorce, for example), is insular, and that isolation supports problematic racial politics through its celebration of a particularly narrow type of white [3], liberal, colorblind worldview. Despite the show’s careful attention to gender politics, and even its occasionally explicit discussion of racial inequality, the girls’ friendship reinforces many elements of the White Fragility that Robin DiAngelo argues perpetuate the representational complicity of the contemporary white supremacist system: segregation, racial belonging, and psychic freedom. [4] Often rendered racially exclusive in Horrible White People shows, friendships like Abbi and Ilana’s thus repeat the critiques [5] leveled at white feminists for their failures to fully understand or enact intersectional politics.

Throughout the series, for example, Ilana generally espouses the type of liberal multiculturalist rhetoric of a cross-race ally. Specifically, though, she tends to espouse the post-racial ideology of millennial liberal whites. She says matter-of-factly in one episode: “In three generations, gentrification is gonna be a non-issue because statistically, we’re headed toward an age where everybody’s gonna be like caramel and queer.” On the surface, the joke has the sheen of inclusivity, but Ilana is espousing the colorblind ideology of post-racial “sameness,” which Sarah Turner and Sarah Nilsen (2014) describe as enabling the continuation of racial apathy: if we are all the same, no action towards racial equality is needed now. [6] Alison Herman astutely points out the complicated representational politics of the series: “Broad City was a simultaneous parody and embodiment of the well-intentioned white-girl mind-set, a complicated dynamic The New Yorker‘s Emily Nussbaum expertly pinned down in her review of Season 3. It’s a show that contains the perfect zinger (‘Sometimes you’re so anti-racist that you’re actually, like, really racist’); it is also a show that has become synonymous with the semi-appropriative catchphrase ‘yas, kween.'” [7] Both of these revealing moments of racist speech, and several others within the show, emerge from the loving, supportive rapport between the girls, where Abbi might raise a questioning eyebrow to Ilana’s behavior or make a subtle critical comment but ultimately allows Ilana to simply shrug them off. Their dynamic represents how Abbi continually fails to fully confront Ilana’s post-racial racism. In her unwavering support as the BFF who understands Ilana ultimately means well, Abbi becomes crucial to validating Ilana’s views and is thus complicit in the institutionalized racism that allows ‘well-meaning’ liberal white people to crack wise about race and racial inequality while retaining the privilege of not explicitly engaging with their position of power within a white supremacist racial system.

Season four’s seventh episode, “Florida,” trades in more of the problematic dynamics of White Fragility that are buttressed by the girls’ insular friendship and that plague both the series in particular and Horrible White People shows in general. The episode’s premise is that Abbi and Ilana take a trip to Florida to clean out Ilana’s Grandma Esther’s apartment after she passes away.

The episode mocks Florida throughout, with jokes about it being “America’s droopy dick” and a series of gags rendering the normalization of gun ownership absurd and dangerous. Nevertheless, the tropical climate, vacation setting, and clichéd but happy pastel color palette are represented as a respite from the harsh grey winter of New York, which frames the rest of the season and serves as a visualization of the characters’ despair over the divisive political climate under Donald Trump. Abbi and Ilana both revel in the sunshine, commenting, “Man, this place is so magical; it has everything: sunshine, warmth, greenery.” Their sense of peace in their new environment makes them question why they are living in New York, with constant “danger and anxiety grinding them down.” Thus, when they stumble upon an open house for a spacious apartment at $425 a month in the retirement community, they simultaneously proclaim, “We’ll take it!” 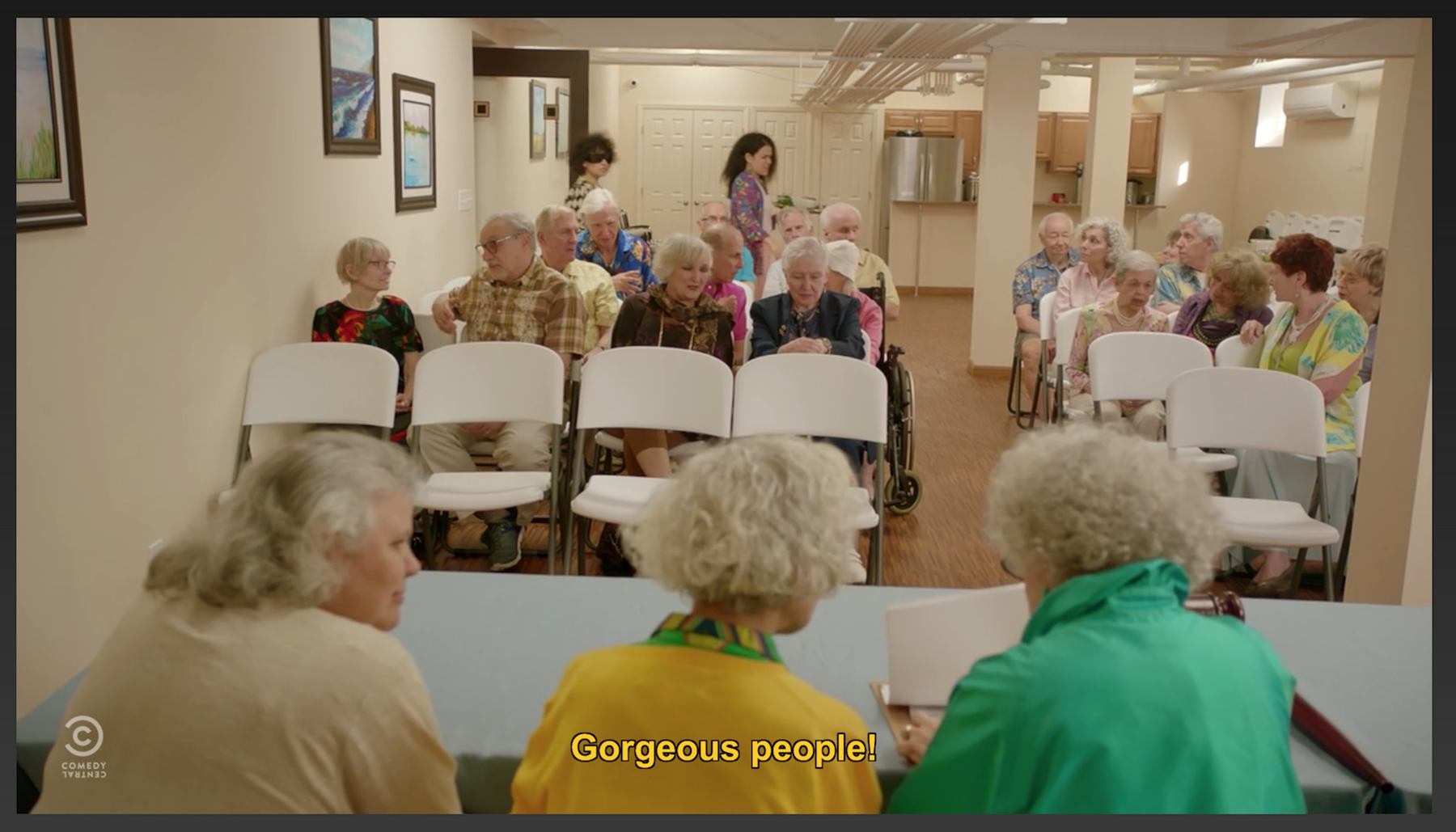 An example of the whiteness in mise-en-scene

What Abbi and Ilana don’t seem to notice about this idyllic community is its blinding whiteness. There are subtle cues to the whiteness surrounding them in the casting of extras and supporting characters, as well as the muted costumes, abundance of white hair and micro-aggressions of some of the community residents, including one character’s description of Ilana’s African American ex-boyfriend as “a gangster dentist.” But the girls’ pleasure in the community exemplifies white people’s privilege of not seeing their own racial identity, and not bearing the social burden of race given America’s continued segregation. DiAngelo explains, “Whites consistently choose and enjoy racial segregation. Living, working, and playing in racial segregation is unremarkable as long as it is not named or made explicitly intentional” (62). Despite the girls’ obliviousness, their racial privilege is indicated when the apartment rental agent admits that residents usually have to be over 55. He nevertheless encourages them to apply, surreptitiously nodding toward an elderly upper-middle-class African American couple interested in the apartment as well.

What follows is a montage portraying the girls winning over the community members in a series of trials in affluent whiteness: playing tennis, judging expensive clothing as a sign of power in the community, dancing conservatively to American standards, and understanding traditional white suburban cuisine like cocktail pickles and white fish dip. Throughout the episode, the girls remain blissfully unaware of their whiteness and the privileges it’s granting them, instead proudly focusing on their ability to charm the community’s residents. The girls’ eye-opening moment finally occurs when the community board unanimously accepts the girls’ rental application and explains, “We’d rather have a couple of Jewish dykes than a couple of niggers.”

Only this explicit racism triggers the climax of Abbi and Ilana’s White Fragility as they run away from the meeting proclaiming, “We’ve got to get the hell outta here. What a bunch of monsters!” The whole episode illustrates how Abbi and Ilana live in an insulated environment of racial protection, thus building their expectations for racial comfort while at the same time lowering their ability to tolerate racial stress (see DiAngelo). The centrality of racially segregated friendships on these shows exasperates this insulation while encouraging liberal viewers to be charmed by the funny, seemingly feminist characters. Fleeing the scene of racial stress in this example becomes a joke that supports a reading of Abbi and Ilana as “woke” white girls horrified by racism. But that inevitable response (the show’s structure demands a return to New York) enacts the privilege of liberal whites to not cope with or even see more consistent structural racism by which the girls have been surrounded the entire episode.

Similar to Sut Jhally and Justin Lewis’ analysis of the The Cosby Show before it, this cycle of programming, then, tends to represent and legitimate a new, more enlightened-but no less insidious-form of racism that continues to not question the characters’ white supremacy and ultimately centralizes empathetic White Fragility along with the narrative and structural factors that enable it. Many of these shows can be read as parodies that move between honest loving homages and exaggerated critiques, allowing for multiple pleasures or interpretations by audience members. We argue, however, that given the celebratory, liberal, quality discourses that surround shows like Broad City, the insidious dynamics of White Fragility in the narratives and characterizations are less interrogated.