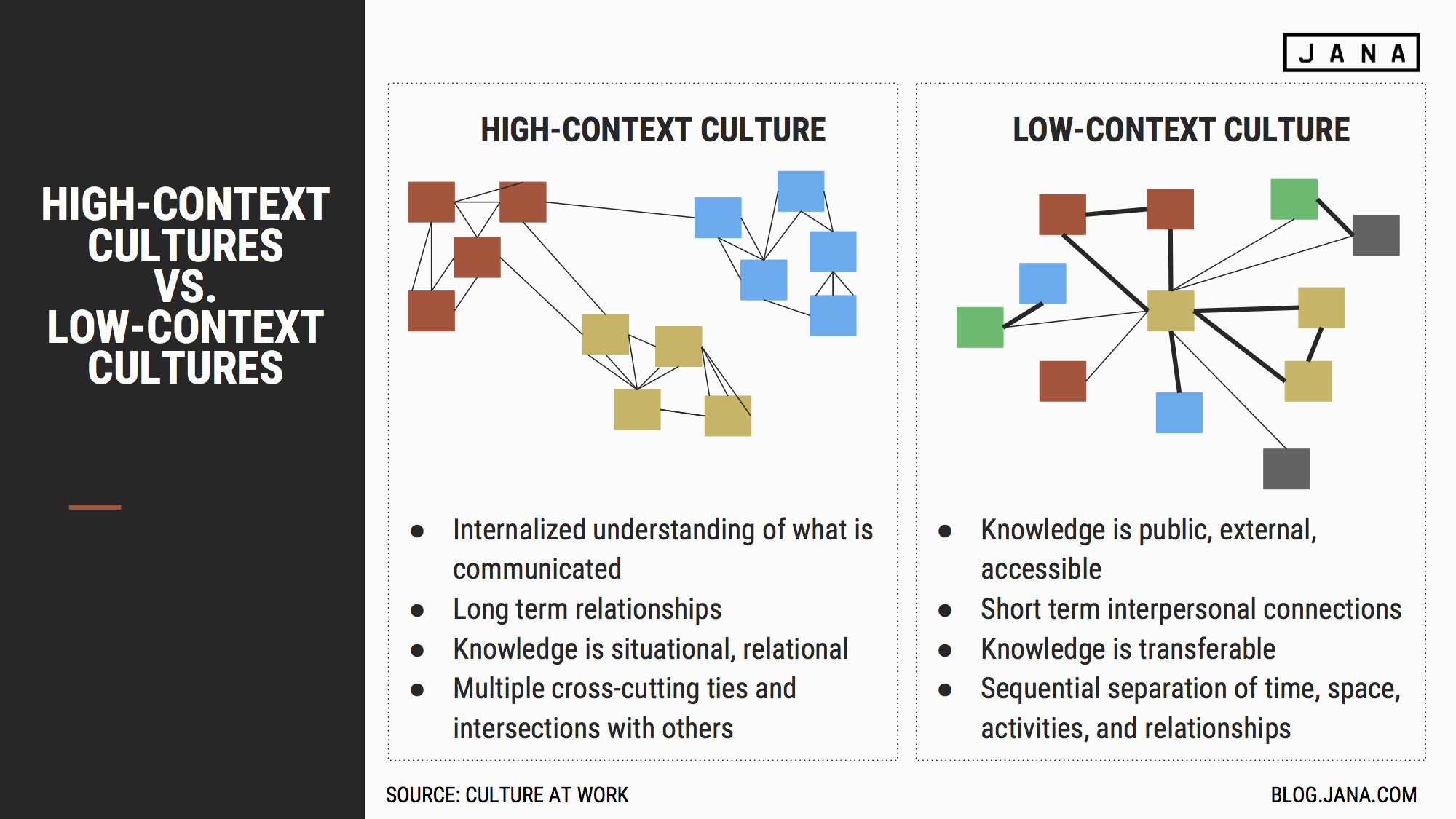 As content creators and/or co-creators working alongside the principal writers, artists and project managers, we are keenly aware of the importance of context when generating content that will be consumed on a global basis. I think especially in the cases of localization and culturalization professionals, context is so critically important to our work because so much depends on conveying the right information across linguistic and cultural barriers. Without all the proper contextual cues and metadata, our jobs become extremely challenging – if not even impossible in some cases.

Many experts have long-discussed the nature of context, especially from a cultural perspective and probably most notable among them is Dr. Edward Hall and his concepts of high and low context (see diagram). This refers to the differences in cultures based on communication styles, so that high context cultures require a lot of local linguistic cues that help frame the message. By contrast, in low context cultures, messages can be communicated without as many cues, thus the message has the potential for greater understanding outside its original locale/culture. This brief video (from Tero Trainers) provides a good explanation of the core differences between high-context and low-context cultures.

Dr. Hall’s framework helps us understand some of the fundamental differences in how messages are perceived across a variety of cultures. Most people who work in the content industries have some awareness of cultural cause and effect, realizing that an action made in one context can lead to either positive or negative reactions in another context. Some of these reactions are quite predictable while others may seem completely irrational. The way that a local consumer will react to the content has much to do with the context in which they personally exist, such as their faith, their ethnicity, their language, their location, and so forth. Also consider the other contexts in which the consumer operates – their social connections, their economic status, their educational background, the political environment, and so on. Thus, there are a lot of underlying reasons for why people in a specific culture react to certain content in one way or another, so it’s important to avoid making knee-jerk assumptions about how people respond.

In a simplified way, we can look at any specific culture as a combined set of “content assets” that clearly define the look, feel, sound, taste and general nature of the culture. Along with those assets come expectations for what will or will not fit within the norms of that culture. If we think about culture in this way, it’s easier to perceive how the content assets of an information product might conflict with the content expectations for what fits within a specific culture. Therefore, if the product contains a piece of content that doesn’t fit with the culture’s expectations or is noticeable enough to shock the consumer out of product’s intended focus (e.g., a word processor, a spreadsheet, a video game, etc.), then a potential problem may arise.

Culturalization is essentially an exercise in constantly evaluating the potential viability of a product in a target locale on the basis of contextual appropriateness, towards the goal of identifying potential risks and opportunities for a specific market. This applies not only to the context within the product, web page, etc. but also the context within the culture into which the product is being distributed. And part of that evaluation is the always-critical issue of discoverability, i.e., how easy is it for the information consumer to find the content element? Mostly typically, the biggest geopolitical and cultural mistakes occur when content intended for specific contextual audience (a language, culture, locale, etc.) is exposed to an unintended audience.

Over time, I’ve expected the unintended audience proportion to slowly decrease, as more people become digital natives and (assumedly) understand the nature of the context of the information with which they’re interacting. However, what’s been interesting in recent years has been two emerging trends among content consumers: 1) the cross-cultural, global appropriation of strongly local contextual issues, and 2) an apparent diminished ability (or desire?) to discern contextual cues and origins.

On the first point, much has been written and studied on appropriation as it relates to cultural anthropology and the transfer of pieces of culture from one to another. It’s been the case for the course of human history, and we’re only seeing it greatly accelerate now due to the hyper-compressed space and time distances, enabled by the ever-growing connectivity of individuals to the internet. While we see more and more people and cultures empowered by internet access, we see more previously local contextual cues either purposefully or accidentally adopted by others across a wide range of locales, and suddenly a once-obscure name, gesture, expression, etc. becomes the latest internet meme.

In regard to the second point about an inability to critically examine context, more content professionals have been reporting similar observations with the communities in which they work. In short, with the vast increase in global connectivity and information consumption, there seems to be growing knee-jerk response to anything that may even remotely be considered “offensive.” One potential cause is the stripping away of contextual cues and metadata around a piece of content, so that we experience an avalanche of online content without context – without which it’s almost impossible to perceive the original intent, which is a critical aspect of any communication.

Here’s a simple case in point. One example I often use in lectures involves two images: a human hand in an open palm gesture, and the other is the Nazi-style swastika as seen during World War II – both as seen below. The Greek “mountza” gesture is locally considered to be as offensive as flipping the middle finger in the U.S. I introduce these images by asking the audience: “Both of these are very negative symbols, but which one is more context-independent?” The juxtaposition of these images is meant to emphasize that context is critical to meaning. In this case, both images are offensive but the mountza requires more cultural context to obtain its specific meaning (i.e., high-context) while this particular swastika is self-explanatory (i.e., low-context); it’s an image that is so universally identifiable that regardless of the cultural context, it will likely be recognized.

Despite using this example for educational purposes, I’ve heard increasingly more people express concerns that using a swastika in any context, even a Buddhist swastika (such as the Japanese manji symbol), is intolerable. This feedback has arisen particularly from younger consumers and students, which makes me ponder if there’s a connection with digital natives and their typically voracious social media consumption and in turn, an implicit familiarity with perceiving content without context.

As we’ve seen in recent years, social media has the ability to completely negate context and foment emotions purely based on what one sees in a punctuated moment without considering the metadata around why the content is being displayed. Indeed, exploiting this core dynamic of social media – the emotional knee-jerk – is at the center of current allegations around Russia’s meddling in the 2016 presidential elections in the United States, as well as information warfare in other countries.

While I realize this may make me sound like an old veteran ranting about a disruptive youth culture, that’s not the intent. As someone who’s entire career has been built around discerning and analyzing the context of information, I have growing concerns that when we lose our ability to understand and appreciate the context of the information we consume, we lose our ability to learn, to seek wisdom, and to gain perspective from other people, times, and cultures. All of these are fundamental aspects to how we as human beings and as a society build upon and advance our collective knowledge and progress.

The next time you see something in social media or elsewhere that triggers that immediate, knee-jerk rage based purely on what you’re perceiving, take a moment to step back and try to discern the intent and context around that content before taking a course of action.