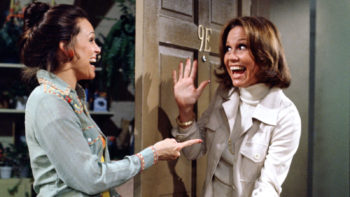 When the death of Mary Tyler Moore was announced, a college roommate of mine posted on Facebook: “Remember how we all used to watch the Saturday night shows (All in the Family, MTM, Newhart, etc.) before we went out on Saturdays? Those were the days.”

It is hard to imagine the impact these shows had on us in the very early 1970s. We were baby boomers and hippies and we didn’t watch TV anymore. We went out at 10 on Saturdays and listened to Jefferson Airplane and took drugs. I don’t know whether the drugs or the going out at 10 is more shocking to me now at the age of 65. But we watched Mary. Somehow she fit the radical agenda.

But not because Mary herself was a feminist. Nor was Mary Richards. As I recall, the character we identified with most was Rhoda. But even Rhoda was not that radical, certainly not as extremely feminist as we were. It was the writing of the show that caught our imagination, and the way the show was radical FOR TELEVISION. Yes, they did “issues,” but not like All in the Family. Rather the show captured the “structure of feeling” of the times, a term Raymond Williams used to describe a softer, more visceral notion of ideology. We liked the way the characters on the show went to work and bonded with their work buddies. We were tribal, too. Even All in the Family featured a traditional family, and we wanted to turn the nuclear family into Woodstock. After the show, we went out en masse, took LSD, and went to see 2001: A Space Odyssey together. 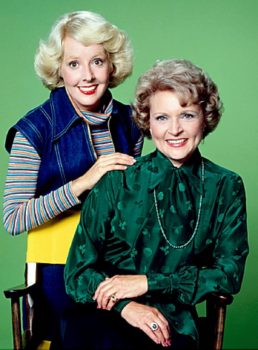 In the early eighties, I collaborated on a book about the company that produced Mary’s show. I did not initiate this project. I never thought of Mary and Rhoda as a subject you wrote about. But when the British Film Institute asked me to do some of the legwork for the book in the U.S., I, of course, agreed. I spent Christmas in one of those early 1980s years at the Wisconsin Archive in Madison, watching endless episodes of Mary and Rhoda and Phyllis and The Betty White Show (still an unheralded comic masterpiece) and some really sophisticated unproduced pilots that prefigured the development of quality drama. (I stayed at a boarding house with a dermatologist who showed me slides of skin diseases. I don’t know why I remember that.)

Mary was part of the embroidery of my life. I would describe the eponymous show as anti-patriarchal rather than feminist. I don’t buy all the hype about how proto-feminist it was. But I would say that none of the dominant males on the show were very masculine. Ted was, of course, a complete buffoon. Murray we thought of as gay and self-deprecating even though he was married. And Lou Grant was all bluster. Mary always got the best of him, and Sue Ann Nivens sexually humiliated him. We loved the Mary/Rhoda relationship and thought it so much better than a nuclear family, especially when we met Mary’s father and Rhoda’s hilarious, but irritating mother, played to the hilt by Nancy Walker, and even Phyllis wasn’t as aggressive as a husband would have been. We knew that because we’d watched Mary as Laura Petrie on The Dick Van Dyke Show and even though she wore pants, she was still intellectually inferior to Rob and to career woman Sally Rogers, who wasn’t pretty or thin, but who was kind of a Dorothy Parker type for her times. Mary may have been on her own, as the song said, but she was never alone. In some ways, this was more of a feminist utopia than the stereotype of the independent woman. 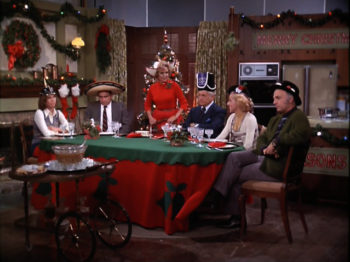 A screenshot from “Not a Christmas Story,” the ninth episode of Season 5

So as they always ask me, what is my favorite episode? It’s not “Chuckles Bites the Dust” because that is everyone’s favorite, and I’m supposed to have more depth. Rather it is a little known episode from the fifth season entitled “Not a Christmas Story.” Many quality dramas (e.g. thirtysomething) attempted unconventional Christmas episodes, but this one took place during a blizzard in Minneapolis in November as the Happy Homemaker is recording her special “Christmas in many lands.” Oddly enough, this episode takes place entirely at WJM and does not feature Rhoda or Phyllis. My own feeling is that Sue Ann and Georgette more than compensated for the spinning off of these characters. In this case, Sue Ann forces the group to dine in her studio on one of her lavish meals (or to face the consequences of stale crackers from the vending machine). The first half of the show involves a battle over the control of decision making between Mary and Murray. A silly struggle occurs over whether Ted should say his tag line the way Murray wrote it or the reverse that Ted prefers–“news from around the corner and around the world.” Murray accuses Mary of lacking authority and quits but because they are snowed in, he is stuck there acting like a belligerent child. As they gather at Sue Ann’s fake Christmas dinner, everyone is angry at everyone else except, of course, Georgette, who says to Ted, “Can’t we just once pay full price and have Christmas dinner on Dec. 25?” Sue Ann forces them to wear ridiculous international hats and to sing “The Twelve Days of Christmas.” They comply angrily. But my favorite moment is at the end where there is a kind of breaking of the fourth wall as the dialogue continues over the end credits. Mary seems to be going for a typical ending when she says something like “I can’t even remember why we were angry.” But then Murray says “I can,” and Mary closes with “Well, yeah, me too.” It is the perfect family show without an ounce of sentimentality. I decided to write about it here from memory and without fact checking because no matter how many times I view it, it remains in the past for me. I’m not one of those people who say they can’t believe Mary Tyler Moore is gone because even though I never missed an appearance of hers, she remains for me a figure that epitomized the shift from the sixties to the seventies with everything that implies. The Mary Tyler Moore Show in my estimation is still the best sitcom ever.