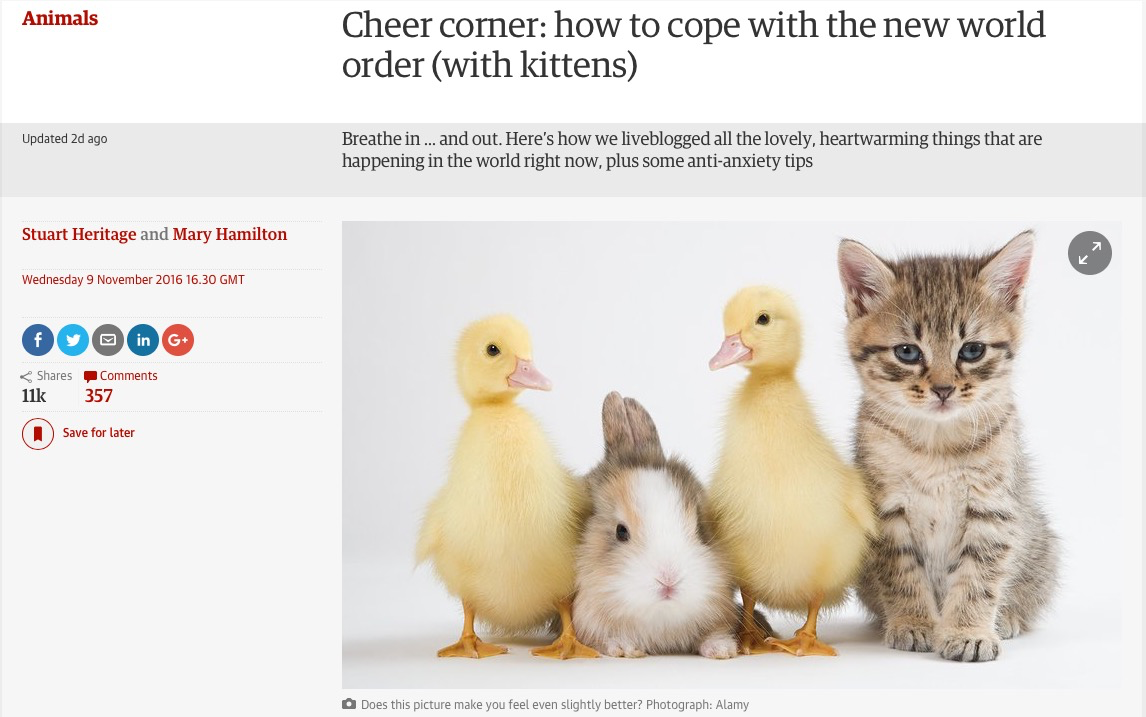 In their coverage of Donald Trump’s surprise victory in the recent US Presidential elections, the Guardian news website set up a liveblog in order to help people cope with the political bombshell. Entitled, “Cheer Corner: How to Cope with the New World Order (with Kittens)” the blog featured multiple posts featuring fluffy cute (mostly pet) animals purportedly in order to help readers emotionally adjust to the (for typical Guardianistas, at least) unsettling political reconfiguration. As co-editor of the forthcoming volume The Aesthetics and Affects of Cuteness [1], the presence of cute fluffy creatures being posited as a salve to a contemporary source of anxiety came as no surprise. Indeed, recent traumatic news stories such as the urban lockdown of Brussels in 2015 due to information of a potential terrorist attack and a botched death penalty in the state of Oklahoma in 2014 are notable examples of how cuteness emerges as a prism through which such events are mediated. In the case of the Brussels curfew readers’ pictures of their cats posed as jihadis were celebrated across a number of news media websites as a commendable strategy of affective resistance, while John Oliver notably bookended an in-depth consideration of the death penalty in the wake of the Oklahoma killing, with the promise of showing his viewers a recent viral YouTube video of “tiny hamsters eating tiny burritos” if they stick with him to the end of the segment, a promise he kept.

In all these cases cuteness emerges as an affective resource, a consolatory modality that gains particular traction in conditions of uncertainty. Indeed, given the societal divisions along lines of race, class and political stripe, not to mention the impact of economic precarity on widening swathes of society that the recent election has thrown into such stark relief, it is no surprise that in our present era cuteness is thriving. However, as scholars of the cute have noted, this is not an innocent aesthetic, but one that at its heart relies on highly uneven power differentials to deliver those comforting affective hits that buffer us from the latest disturbing news stories. It is our consumption of vulnerability in others that provides us with such affective succor. In the analysis that follows, I am going to trace such uneven power differentials as they manifest in a recent animation on the topic of pet ownership.

The Secret Life of Pets is a 2016 animated feature from Universal Studios. The studio was responsible for the surprise hit Minions (2015) and is therefore no stranger to the lucrative potential of cute-driven animation. Indeed, cuteness has long been characterized as first and foremost a commercial aesthetic, and with the studio already drafting plans for a theme park based on the movie prior to the release of Pets (plans since put into effect along with a sequel scheduled for 2018) such confidence paid out as the July-release film generated the highest box office opening so far for that year. The early profitability of the nascent franchise should come as no surprise given that Pets exists at the conjuncture of the continued proliferation through a wide variety of media of this highly commercial aesthetic and the hyper-commodification of pet ownership, two contemporary phenomena that in our book we argue are symptomatic of alienated conditions of emotional and financial precarity that are the attendant in the current phase of neoliberal capitalism.

This conjuncture of pet cuteness and media representation has produced an abundance of texts from the ubiquitous cute cat videos that populate YouTube, as well as an array of reality-based pet ownership advice shows such as The Dog Whisperer with Cesar Milan (2004-13, National Geographic), My Cat from Hell (2011–, Animal Planet) and even a UK show sharing the title The Secret Life of Pets (2014, Channel 5). This expansion of pet media reflects the increasingly central role of the pet in contemporary society, a phenomenon indicated by the huge amount of money spent on pets, as well as the changing relationalities implied in the facts such as, as David Grimm notes, the amount of people who refer to themselves as their pets’ “mom” or “dad” rather than “owner” has increased from fifty-five to eighty-three per cent in the last 20 years. [2]

Pet ownership, as the term denotes, of course, is marked by the very same power differential that is key to cuteness, even as owners increasingly seek to rhetorically jettison the term. As Yi Fu Tuan wrote in his influential study of the topic: “Dominance may be confined with affection, and what it produces is the pet.”[3] The unease we may feel at this combination of affection and dominance arguably provides the main emotional anchor for Pets‘ audience. The premise of the film is that it gives us a window onto what our pets do in our absence, and predictably the narrative, after briefly showing a disconsolate Ben (Louis C.K.) staring unwaveringly at the door waiting for his owner to return, provides a depiction of animal bonding and suppresses the separation anxiety that is a common affliction of the house-bound pets that populate the film. Although, the idea that these animals may have “secret lives” goes some way to assuage the more troubling aspects of this relationship between unequals, the film is never able to entirely banish some of the more uneasy aspects of pet ownership, and in part, I argue this is intricately linked with cuteness, its ability to aestheticize powerlessness [4] [5] and its historical roots. [6] Lori Merish, in a key essay on the topic, argues that cuteness is a “racialized style” with forms of power and coercion at its core. Describing the staircase tap-dance scene from the movie The Little Colonel (1932) which placed the cute Shirley Temple alongside Bill “Bojangles” Robinson, she argues: “The alignment of the cute Shirley Temple and the body of an African American male evokes the history of slavery and its coercive appropriation of the body—a body forced to work, to reproduce and at times, to sing and dance, at the white master’s will.” [7] 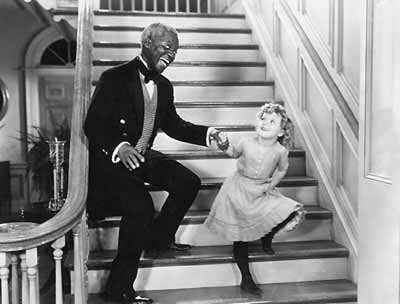 From The Little Colonel

It is through the character of Snowball in Pets that cuteness’s proximity to both historical and contemporary instances of racial domination manifest– a parallel drawn with pet ownership that threatens to disturb the affective equilibrium of the film. Voiced memorably by black comedian Kevin Hart, Snowball is a white fluffy bunny, the epitome of cuteness, yet depicted in the film as the ruthless gang leader of the Flushed Pets (motto: “Liberated Forever, Domesticated Never!”).

Hart’s Snowball from The Secret Life of Pets

The film’s overt references to slavery—evident in the usage of terms such as “owners” and “liberation” as well as the parallels it draws with the gang violence that has decimated many black communities in the US, mean that Pets struggles to adequately marshal the discourses of domination and subservience that its analogies inevitably evoke. At the end of the movie Snowball is picked up by a little girl and (despite his initial protests) seduced by some petting on the head and the girl’s promise to love him “forever and ever and ever.” Thus, arguably the film’s most morally questionable move is in its evocation of a radical energy that is so neatly contained by the end of the narrative. The ending suggests that the best place for a pet is in the home.

The tensions evident in Pets may be due to the fact that often such animations try to secure a coalition audience of parents and children through casting and edgier content aimed at the older viewers. However, a number of recent cute-inflected texts make a similar move with varying degrees of success, suggesting that in treating overtly cute topics or characters there is a latent potential to invoke relations of domination and subjection. In Ted 2 (2015), for instance, the eponymous cute-ified, pot-smoking, lascivious bear (Seth MacFarlane) tries to gain legal status as a person in order to adopt a child with his partner Tammy-Lynn (Jessica Barth). The film stresses the commonalities between Ted’s situation and that of Black Americans before the abolition of slavery and its failure to impress at the box office, was attributed by a number of critics to this somewhat insensitive premise. [8] A more subtle parallel is made in a snatch of conversation in the animal animation Zootopia (2016). When cynical con artist fox Nick (Jason Bateman) refers to his crime-solving rabbit partner, Judy Hopps (Ginnifer Goodwin) as “cute” she takes offence. Her reply, “A bunny can call another bunny cute, but when other animals do it…” trails off, indicating Judy’s hurt feelings. The parallel this draws with one particular inflammatory term will be quite clear to adults in the audience, but in the small piece of dialogue the vulnerabilities such instances of language can provoke is also raised in a manner suitable for a children’s movie.